We are drowning in plastic. Plastic is found at our fingertips, from computer keyboards to salad boxes to disposable bottles. 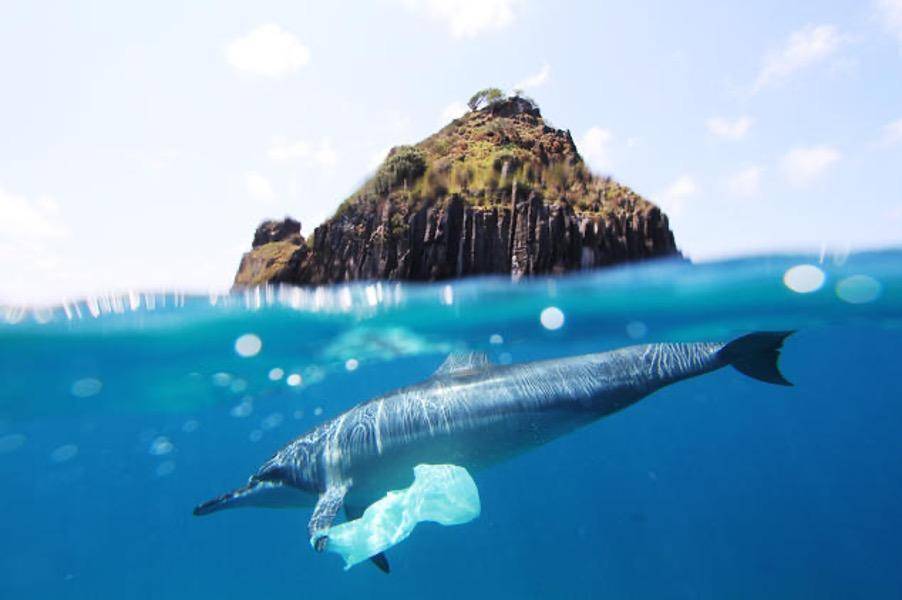 The disposal of plastic waste has become a global issue due to its aesthetic, economic and ecological impacts. Plastic pollution is the accumulation of man-made plastic products which exist in the environment. This pollution creates problems for wildlife and their habitats, as well as for human populations. Growing concerns have led to many volunteer clean-up efforts and coastal surveys which have contributed to valuable data on the categories of litter. There are two broad categories of plastic litter: fishing-relating gear such as line, nettings and buoys; and consumer items including plastic bags, plastic bottles and food packing items.

Where does this litter end up?

A study published in 2017 found that of the 8.3bn tonnes of virgin plastic produced worldwide, only 9% had been recycled (Geyer et al. 2017). 40% end up in landfill and a third enter the ocean. At least 8 million tonnes of plastic are leaked into the oceans annually. This is a difficult figure to comprehend - but it's estimated that by 2050, discarded plastic will outweigh fish in the world's oceans (unless overfishing brings this date even closer).

Plastic debris has been documented in all marine environments, from coastlines to the open ocean (Barnes et al. 2009), from the sea surface to the sea floor (Schlining et al. 2013), in deep-sea sediments (Woodall et al. 2014) and even in Arctic sea ice (Obbard et al. 2014).

Our oceans are made up of a network of currents that circulate water around the world - called Gyres. Gyres are particular hotspots for plastic accumulation. Within the North Pacific is one of the five major oceanic gyres, which spans from the West Coast of North America to Japan. This gyre is known as the Great Pacific Garbage Patch, which has an extremely high concentration of microplastic suspended throughout the water column - imagine an area the size of Texas containing minute plastic floating in the ocean.

Abiotic factors including sunlight and waves cause floating plastic rubbish to break into smaller particles which never completely biodegrade. This causes a microplastic hazard for even smaller marine organisms and end up in our food chain.

Microplastics also make their way into the ocean via waterways and sewage systems as microbeads. Microbeads are used by us as exfoliants, commonly found in facial scrubs and toothpastes. These plastics are labelled as polyethylene or polypropylene. We disregard this type of plastic pollution because the plastic is so minute (smaller than 5 millimetres), but 5000 to 95,000 microbeads are washed away with a single application of some products (Napper et al. 2015). When rinsed into the sewage system, these particles have shown to pass the sewage treatment plants and enter the surface water, where they are consumed by aquatic organisms. Microbeads which are harmful to human health accumulate in all kinds of fish and shellfish such as mussels, tuna, oysters, salmon and anchovies.

We rely on oceans as healthy ecosystems which maintains the balance of greenhouse gases and the release of oxygen. Of all of the plastic waste in landfills, buried beneath each one of them, plastic leachate full of toxic chemicals seep into groundwater towards lakes and rivers, and finally the ocean. Fundamentally, plastic waste which is accumulated in the ocean is affecting the oceans' chemistry and its aquatic life. The number of scientific publications on marine debris has increased dramatically in the last decade, and nearly 700 marine species are known to interact with marine debris (Gall and Thompson, 2015).

Animals are forced to endure plastic, because it’s a man-made material inflicted in their environment. Entanglement and ingestion are the two main mechanisms by which marine taxa are exposed to marine debris. While there are individual cases of these effects, the population-level consequences of marine entanglement, ingestion and contamination remains relatively unknown. 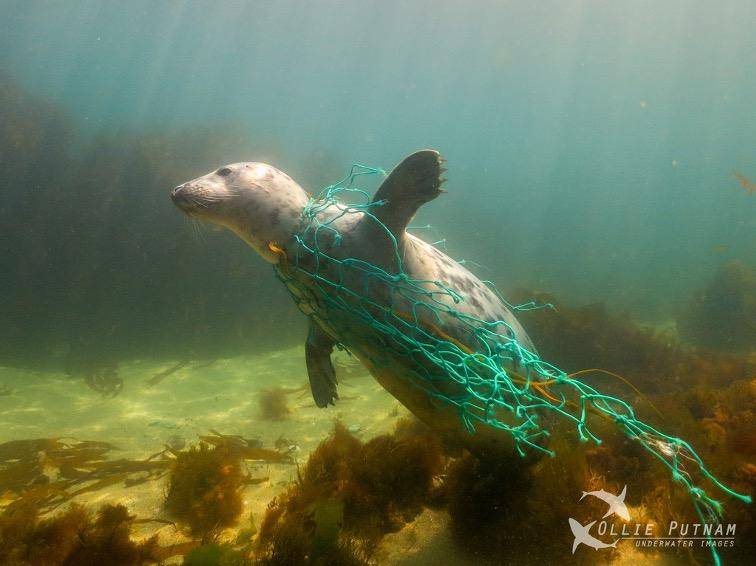 The most common items causing entanglement are fishing related gear, balloons and plastics bags. Fishing gear poses the greatest ecological threat. Incentives such as the introduction of re-design of gear, combined with penalties could help to reduce gear loss and intentional discarding. 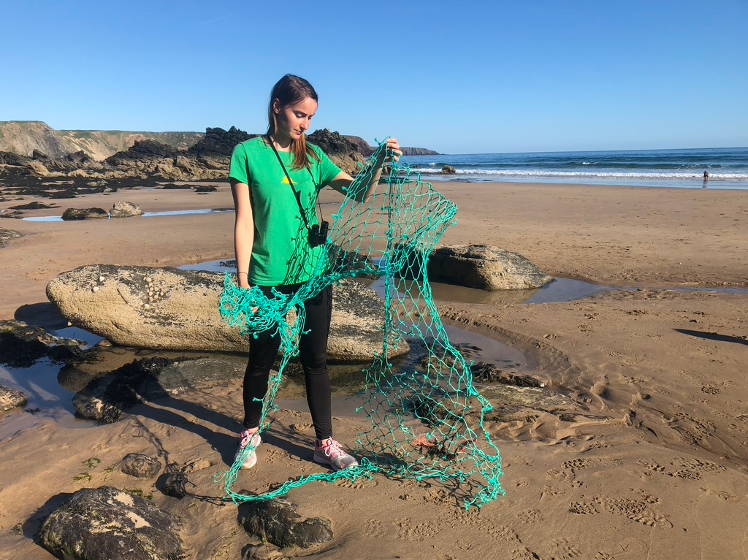 In terms of ingestion, all plastics found within a study by the International Coastal Cleanup had shown to pose a threat via ingestion. Food packaging, plastic bottles, plastic utensils and straws are the items posing the highest risk. In 2015, a group of marine biologists in Costa Rica discovered an endangered Sea Turtle with a 12 cm plastic straw lodged in its nostril. Six of the world's 7 species of sea turtles have been found to ingest debris. All 6 are listed as globally vulnerable or endangered (IUCN, 2012).

Plastic has acutely affected albatrosses, which roam ¬across the Northern Pacific Ocean. Albatrosses frequently grab food wherever they can find it, which leads to many of the birds ingesting plastic. On Midway Island, which comes into contact with parts of the Great Pacific Garbage Patch, albatrosses give birth to an estimated 500,000 chicks every year. Two hundred thousand of them die, many of them by consuming plastic fed to them by their parents, who mistake it for food. Findings from numerous necropsies of albatross stomachs reveal plastic bags, bottle caps, and synthetic fibres from clothing. 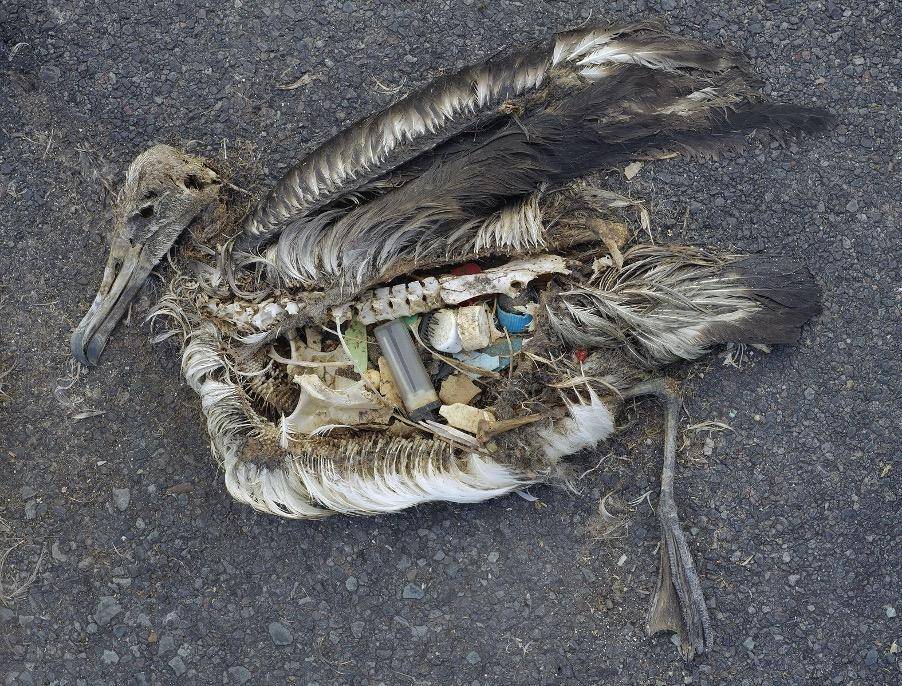 Plastic contents in the stomach of an Albatross. Image by Chris Jordan.

Even the largest species are affected. A study by Fossi et al. (2012) investigated the impacts of microplastics on the Mediterranean Fin Whale, one of the largest filter feeders in the world. This species engulfs approximately 70,000 litres of water at one time, potentially risking microplastic ingestion both directly and indirectly from the water and plankton, respectively.

Last year on the Aldabra, a remote atoll in the Indian Ocean, it was reported that 513 tonnes of plastic washed up on its shore, including 360,000 flip-flops. Turtles were seen attempting to nest on beaches littered with an extraordinary number of flip-flops, bottles, lighters and other plastic debris that had been carried thousands of miles by ocean currents. It’s been described to have the most waste ever seen on any island. Despite the efforts of volunteers, it’s believed that at least 95% of the plastic is still there.

The understanding of the ecotoxicology of plastic pollution in terms of chemical contamination is still limited, but studies have shown that plastics concentrate chemicals in the environment and concentrations in species such as sea birds are correlated with plastic in the animal’s guts. Degrading plastics leak toxic chemicals such as bisphenol A, a chemical used in hard plastics such as reusable water bottles and the linings of aluminium cans. This chemical has shown to interfere with the reproductive systems of animals.

Many individuals and international organisations are dedicated to preventing plastic pollution. They are advocating that limiting or eliminating our use of disposable plastics and increasing our use of compostable resources will be the best way to clean up our oceans.

An estimated 500 billion to 1 trillion plastic bags are used worldwide every year. However, many states and countries have introduced a plastic bag ban, including California, Mexico, India, Bangladesh and numerous towns in Australia. Pakistan is the latest country to welcome the ban which came into play on 14 August. Germany also has plans to introduce a new law banning the use of plastic bags, although it is not certain when this will come into place.

In 2018, microbeads could no longer be used in cosmetics and personal care products in the UK. The ban initially barred the manufacture of such products, however a ban on sales soon followed. The UK government first pledged to ban plastic microbeads in September 2016, following a US ban in 2015. Although this is a great move in the right direction, this ban does not cover all products such as lipsticks and sun cream.

Plastic Pollution Prevention - What Can We Do?

If you look around the area close to you now, do you see anything not wrapped in plastic? The first step to reducing plastic pollution is to simply cut down. These easy steps can help to reduce the amount of plastic you throw away every year: