Daniel Crockett and Rory Moore of The Blue Marine Foundation headed to Mexico to learn about the rich marine life there, and the threat it’s under. They swam with countless species, spoke with local fishermen and scored a few waves, too. 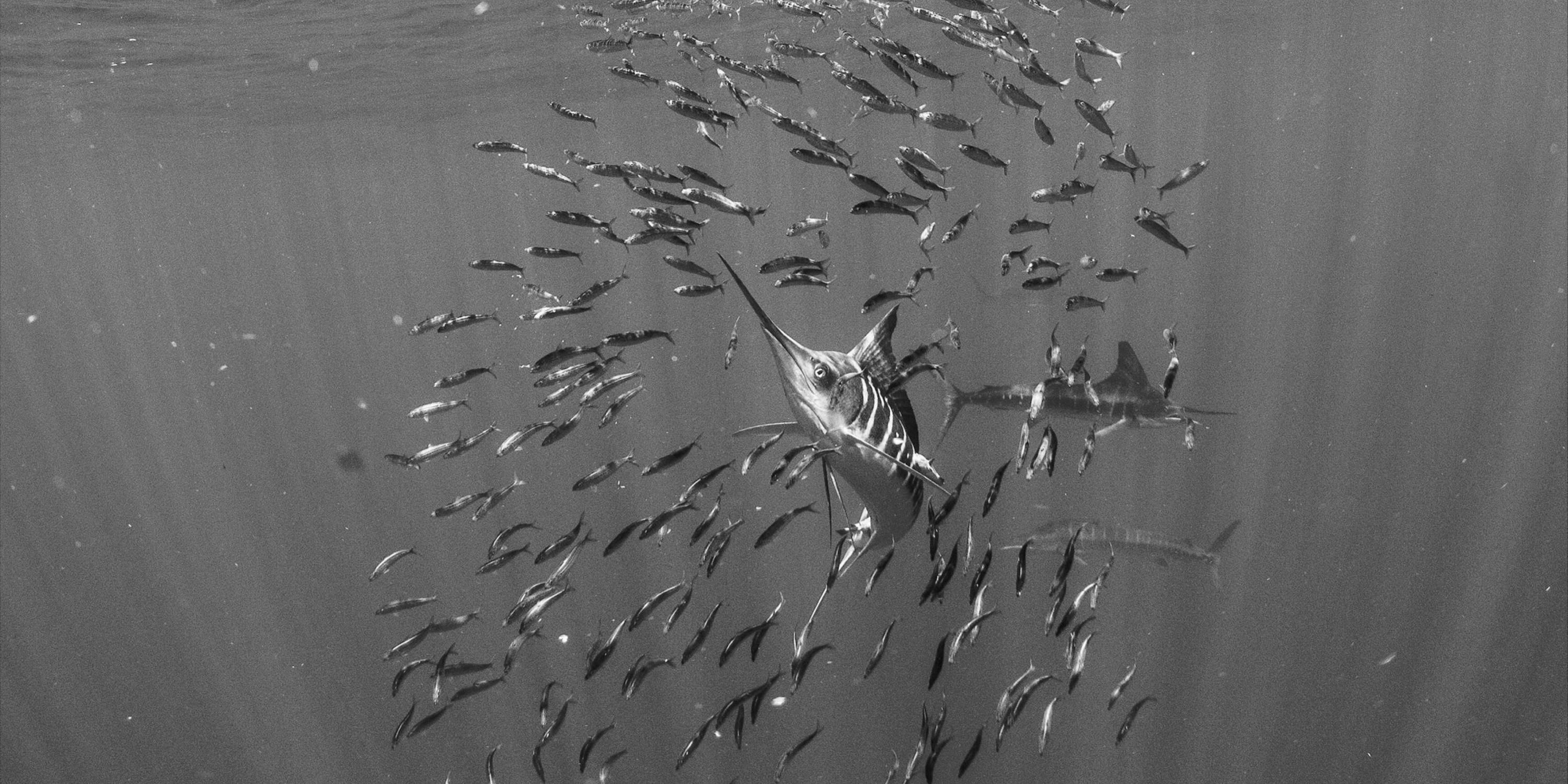 A rainstorm. Thunder in the night like hand grenades. Flowers spring to life in the desert. Dirty rivers bust out of their banks. The marquee wave, the one they held the competition at, is completely empty. It breaks beside huge lumps of granite that could be Penwith. To get out there means navigating the lagoon and a tiny, delicate white egret picking at a dead snapper. Not a soul on the beach, the palapas and driftwood camps empty in the rain. You can feel the surf infrastructure in the valley, the paved road, the surfer accommodation - about as developed as this zone gets. But today it’s dancing for an audience of one. I’m not really in Mexico for waves, but for fish (namely to support the protection of large areas of living ocean), but more on that later.

The river has cut its way out of the lagoon tight against the rocks, shortening the inside section. The paddle out is all timing. Get it right and its 15 strokes and dry hair. A wrong move and you are paddling for ten minutes going backwards. But with nobody around you can work your way up the point, set by set, inching your way closer to the source of it. The best ones aren’t the sets, but the in-betweeners that focus their energy on the sand, running mechanically through what feels like infinite space. The same hollow little waves I’ve hunted for at Little Marley and Anchors and a hundred points between. This is what we live for, really. One comes my way and you can feel the tension in it, see the line of it gathering, the symmetry of the thing. The tube opens up, running from brown into blue, backing off, clamping shut. I’m skipping back up the point like a grommet. The surf industry may have permanently blown the place, but on this day it’s just birds, fish and tunnels. 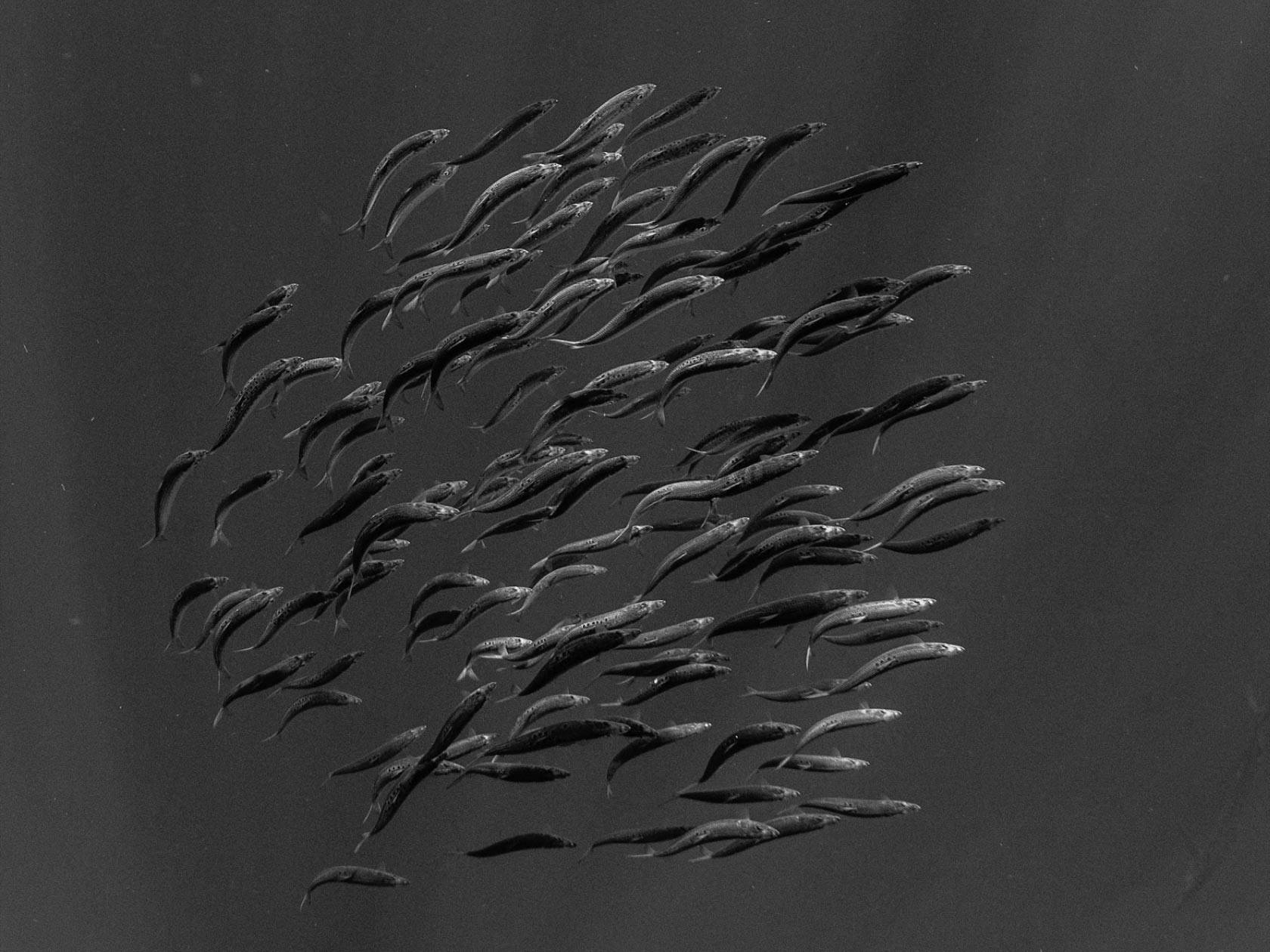 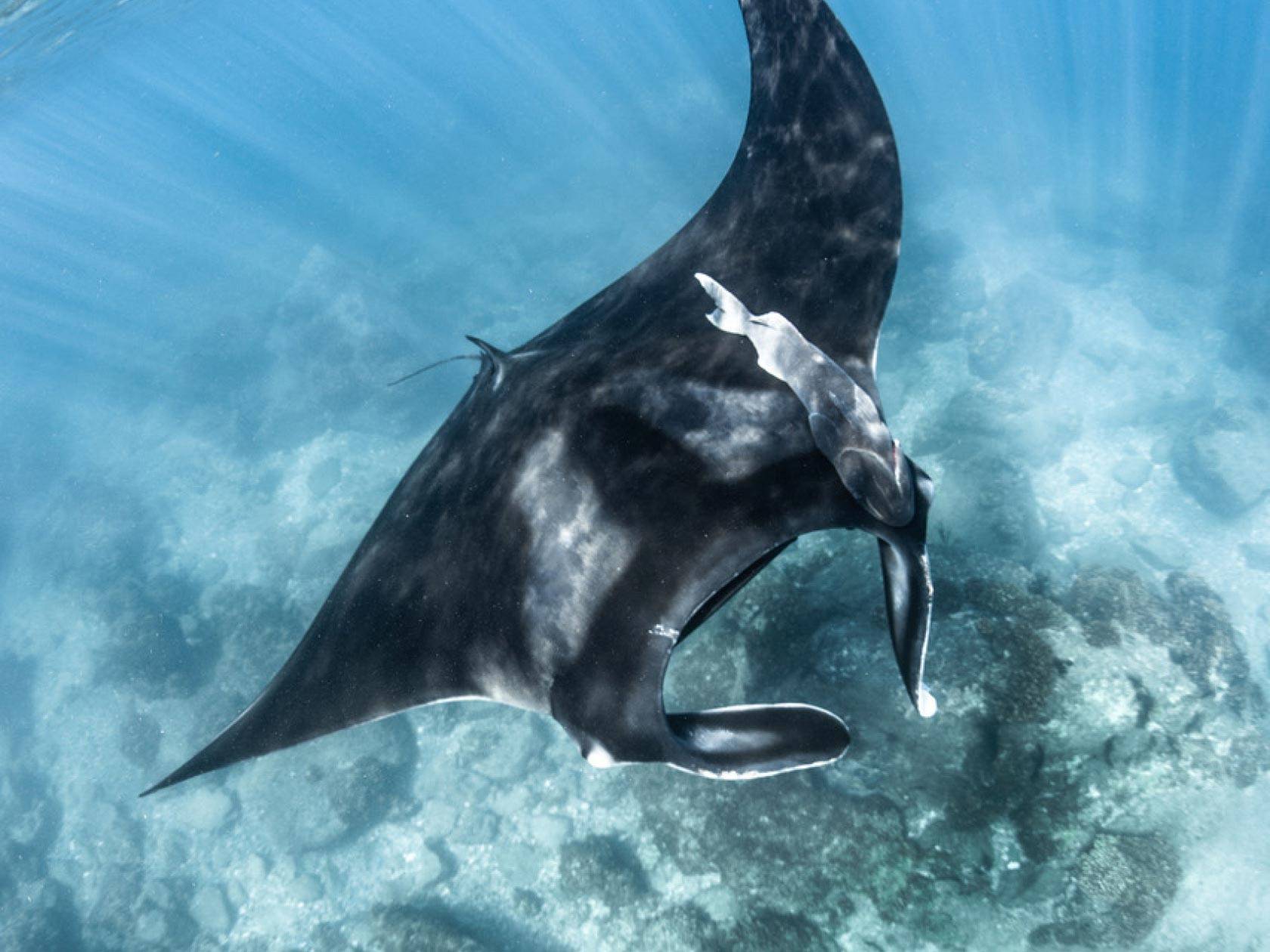 The ocean is home to 95% of life on earth. Mexico has 11% of biodiversity on the planet. It figures therefore that Mexican waters are rich in living things. From the Pacific to the Sea of Cortez to the gulf, the whole place is alive in a way that is hard to appreciate unless you’ve seen it. Shifting Baseline Syndrome, where we accept as normal what we encounter ourselves, is endemic and hard to resist. So when we spend an hour freediving at home and see a single ballan wrasse, we consider that normal. There is a proposal gathering momentum to protect a huge area of ocean around Baja California Sur. The concept: the Sea of Cortez and Southern Baja Pacific Biosphere Reserve would become the largest marine reserve in Mexico. It would create a highly protected no-fishing zone of 88,000 square kilometres and ban industrial fishing from 192,000 square kilometres of biodiverse ocean. This in turn would benefit the artisanal fishing community and sport fishers alike. But to achieve this is highly complicated, as illustrated below.

Being a sardine is a hazardous thing in Mexico. Gabino Zarabia, a fisherman turned tourist operator, can tell the composition of a ball of sardines from miles away. He reads the flight of the birds and they tell him how many tiny fish there are and whether they are still or mobile. We aren’t here on the Pacific coast to see the sardines, but to see what is hunting them. A feeding frenzy of sea lions, birds and fish conspire to drive them apart. The striped marlin come out of the deep like tigers, hunting in packs, lethally coordinated. We jump in right on a giant static bait ball, just as a four foot long mahi-mahi steams through it, grabs a fish and disappears. The blue-footed boobies rain death from above, frigates circling overhead waiting to scavenge what they can. The marlin circle underneath, taking turns to plunge into the small fish, stun one with their bills and circle back to eat it. I dive down, hang under the ball with the marlin. They are predatory machines, larger than me, superbly adapted, moving with astonishing speed and lethal force. It is an extraordinary thing to witness. 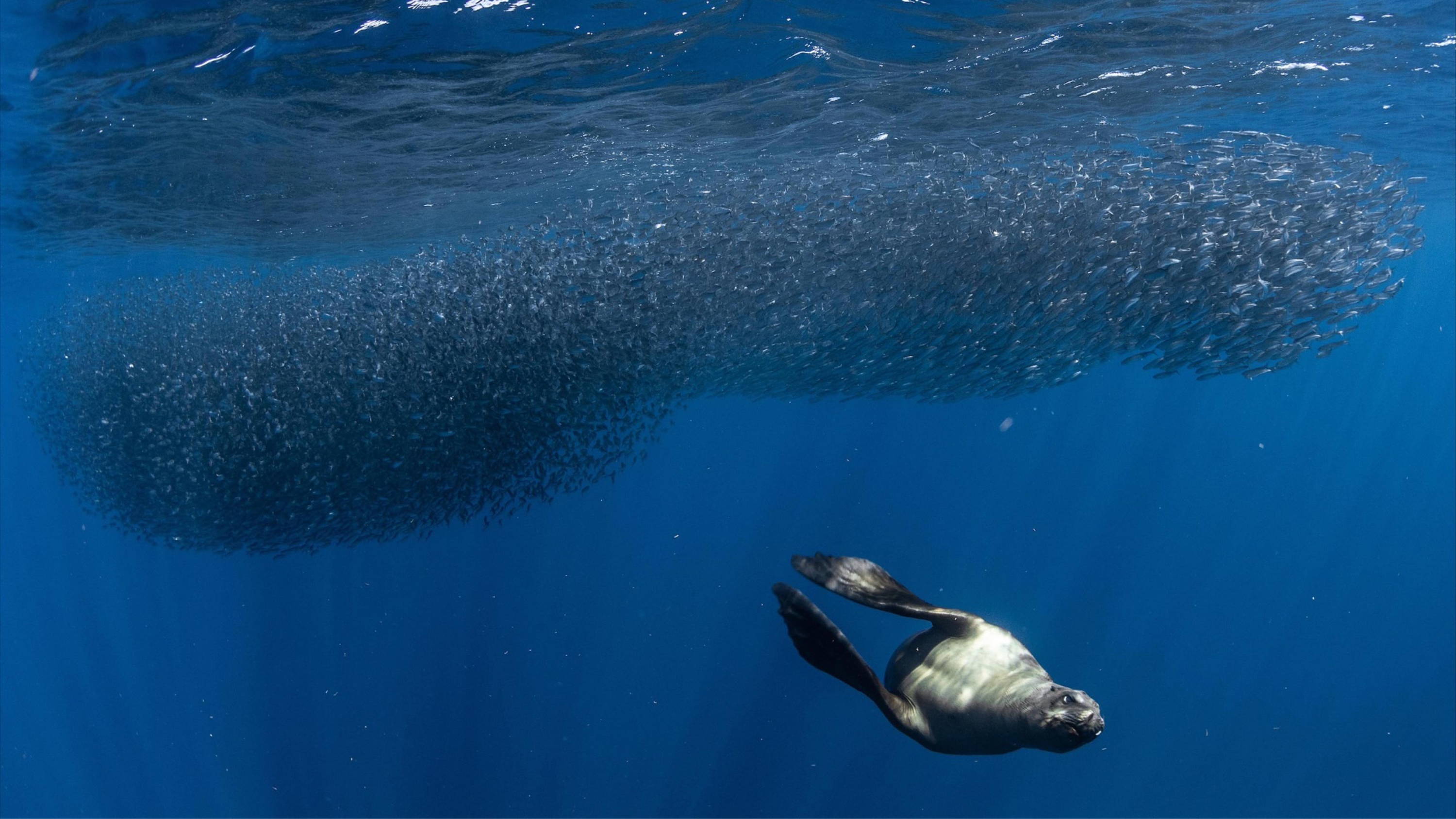 There are five giant sport fishing boats in the upwelling zone, big gin palaces bristling with rods. Loud music, sunburn and Pacificos. Testosterone, adrenaline and social media posing. It’s a funny thing being a human, like there’s a bit missing that this victory over nature somehow completes. Like exerting our power gives us power. We have some seriously weird conversations with the marlin fishers. I’ve got no qualms with anyone catching and killing their dinner and I have a fair bit of blood on my own hands so I’m not preaching. There’s just something vulgar about the approach - one of these boats caught 70 marlin in a day last year.

However, from the perspective of destroying the ecosystem, the sardine trawling industry is a far more serious proposition. A sardine vessel will take 200 tonnes a night, selling it for $120 a tonne. The fish are made into animal feed, a proportion of them are burned and rendered into oil, it stinks. Fishing down the food chain like this is not always wrong – far better to eat a sardine than a slow-growing, low-reproductivity species like a tuna – but the economics and scale are all wrong. People hint that there is bad money in the industry, the sort of money you don’t mess around with. But once you’ve seen those balls of fish and the life they support, it feels wrong to the core to grind them up into dog food, or worse still to use them to feed the environmental tragedy that is farmed salmon. But that’s a whole other story. 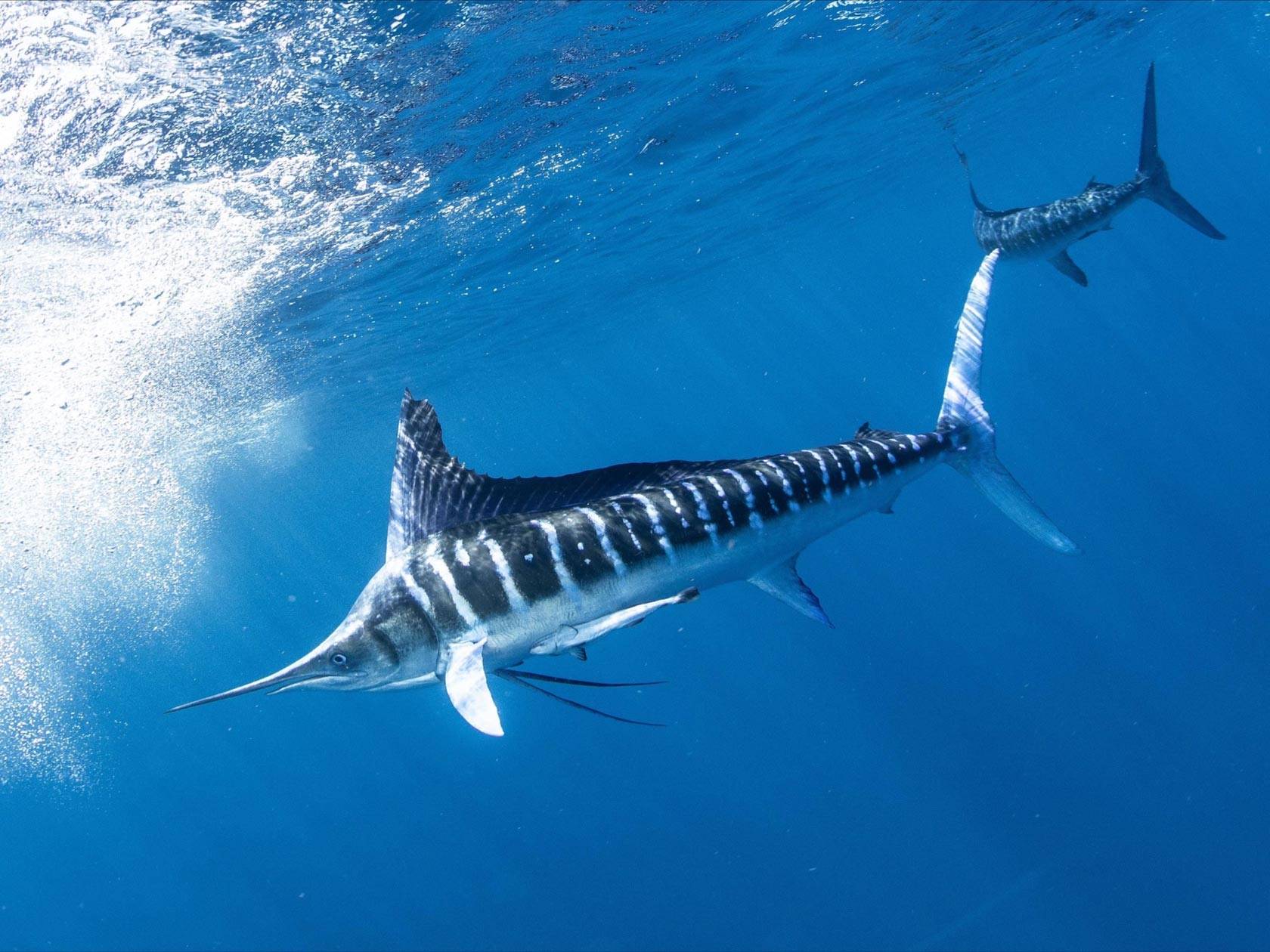 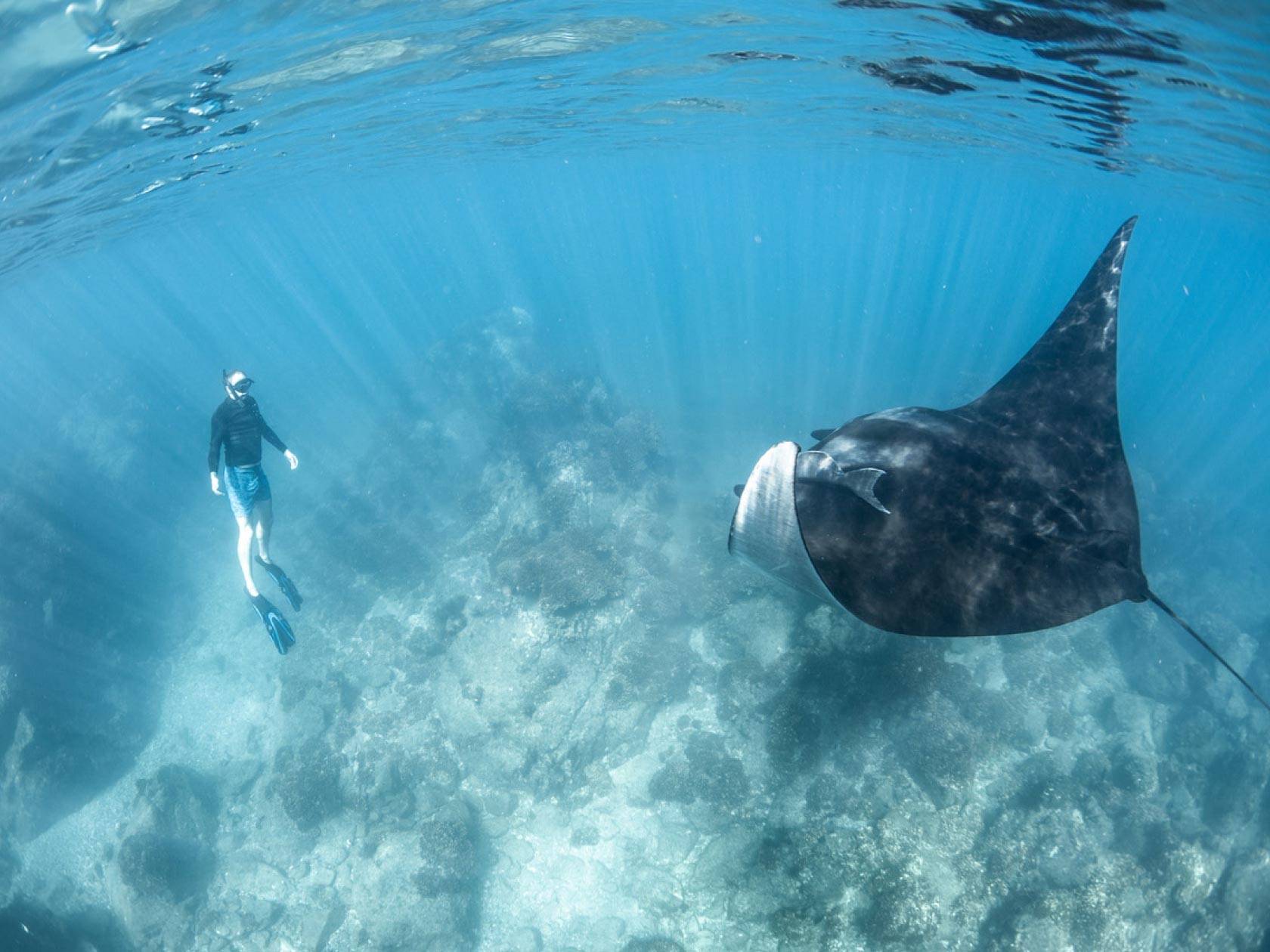 In the Sea of Cortez, we meet with a shark fisherman called Pancho. His father and grandfather were fishermen, and for seven generations before. But he does not want it for his son Francisco. Pancho takes us to a bay and drops us into the water with a giant manta about three metres long. It does laps of the reef, eyeing us curiously, seemingly intrigued. Several remoras hang off it, their gills a shocking pink colour. There is so much life all around us, small fish decorating the reef, the aquarium of the world. Pancho has only caught small sharks this year, it has been a terrible season he says. There is an economic, as well as an environmental imperative, to change. To facilitate the transition from shark fishing to tourism, which will be a long and complicated road, Blue Marine Foundation is working with an all-female conservation group called the Orgcas. This group is using advocacy, media and connection with the fishing community to make the shift in support of the Marine Protected Area proposal. It isn’t an easy task, to say the least.

On the last day, we take a long track to a remote beach, through the floods where a roseate spoonbill is hoovering up tiny shrimp. Down endless tracks, the wave loops its way down the point in the shadow of a lighthouse. It bears a resemblance to The Pass in Byron Bay but with 1/1000th of the crowd, as user friendly as waves get. We take turns, riding the little runners hundreds of metres down the point. Pelicans stake out lumps of granite and fall into the bay on strafing runs, scattering the small fish. A green turtle passes by, close enough to touch. Overhead, tens of thousands of migratory birds flow south. It feels good to be part of this living system, it triggers a memory of how things were, in a time I never saw but wish with all my heart could return. 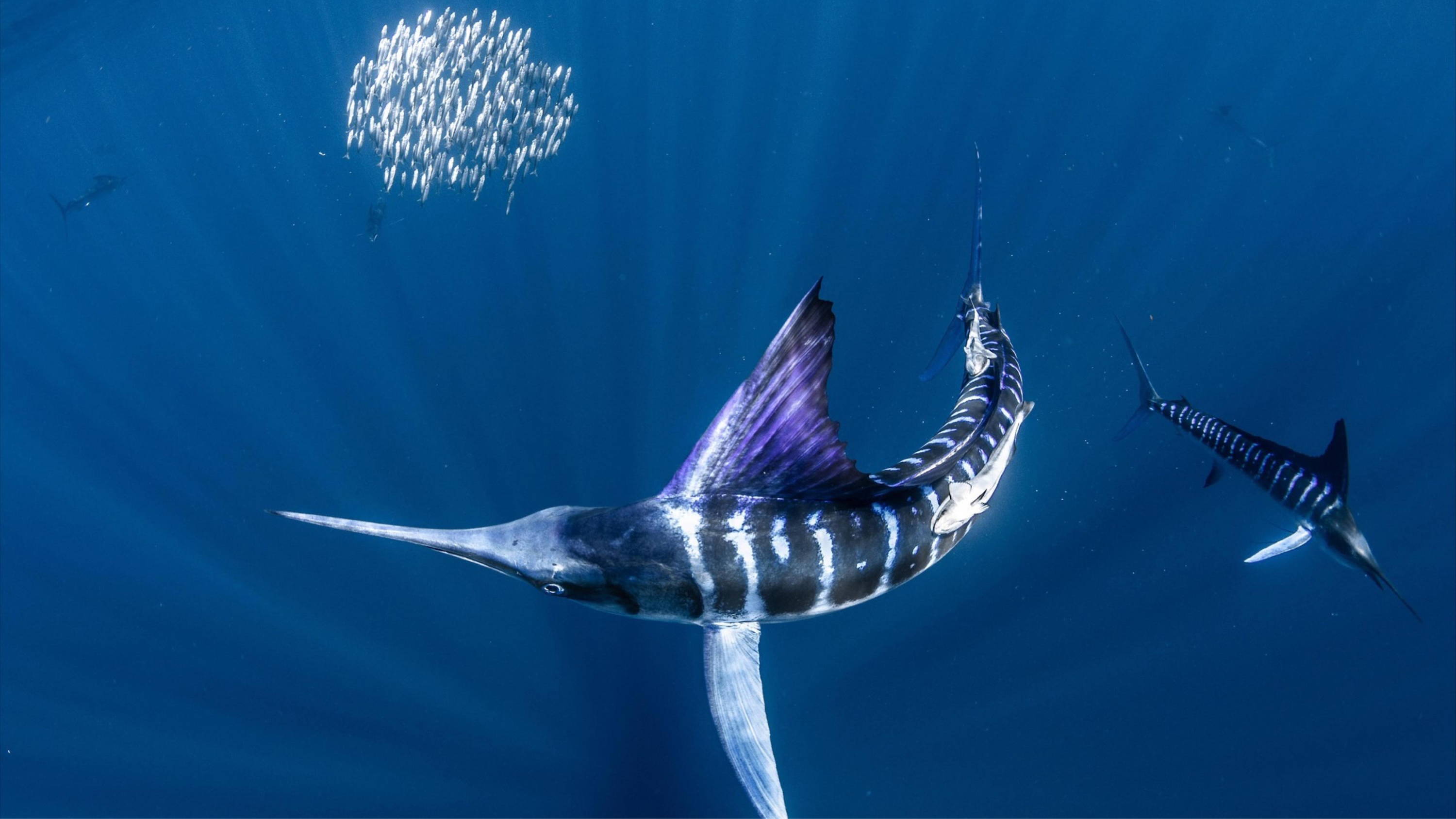 We noticed several dead Olive Ridley sea turtles washing through the lineup. Two days after returning, a huge oil spill decimated Punta Conejo and a number of quieter pointbreaks along the Oaxaca coast, with six months of cleanup by Mexican oil company Pemex ahead.