Josh Vyvyan, is an artist & illustrator based on Cornwall's Lizard peninsula. A Cornish local with a passion for the sea, Josh's work explores native myth and storytelling, creating works that reconnect us with our environment whilst bringing a smile to our faces.

As part of our latest artist series collaboration, he kindly penned the words below; touching on his childhood, the inspirations behind his work and the deep connection he has to the sea and the landscape in which he grew up. 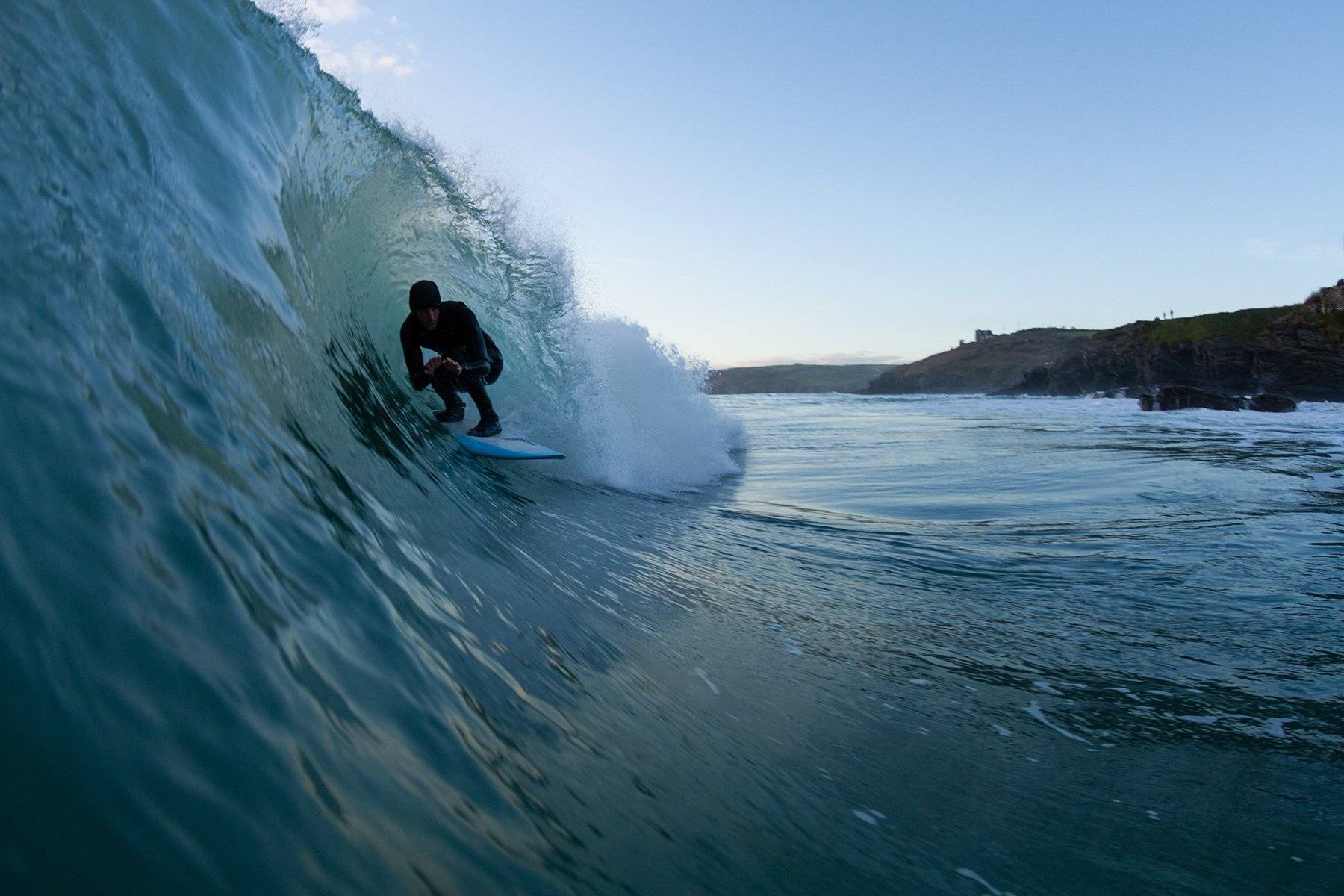 There was a time in my youth when my father, after his last log delivery of the day, would scoop us up from school in our rust bucket of a Toyota pickup and my brothers and I would stand shoulder to shoulder in the back clinging on as we rattled down the hill to the creek. I imagine he was driving slowly, but it felt impossibly fast to my ten-year-old brain, the tarmac rushing past the rusty holes in the floor, my brothers next to me squinting to stop the gnats getting in their eyes.

When we arrived, we would make for the the narrows and wade into the sandy mud, overturning rocks, searching for eels. Dad reliably informed us that they had swam from the Sargasso Sea to live under these rocks, I however was unconvinced. To my shock, they were often under there writhing and glistening, bodies thick as rope.

Summer weekends were for surfing fuelled by charred sausages and ketchup. With no reference points on what surfing was, just the simple act of letting a wave take you inward. The pre ‘content’ era allowed us to build our own ideas on what good surfing entailed, mainly speed and being better than your brother. Quite often by early autumn we would be the only family on the beach, but I could see a few older surfers tracking across the waves beyond the shore-break, and knew it was where I wanted to be. 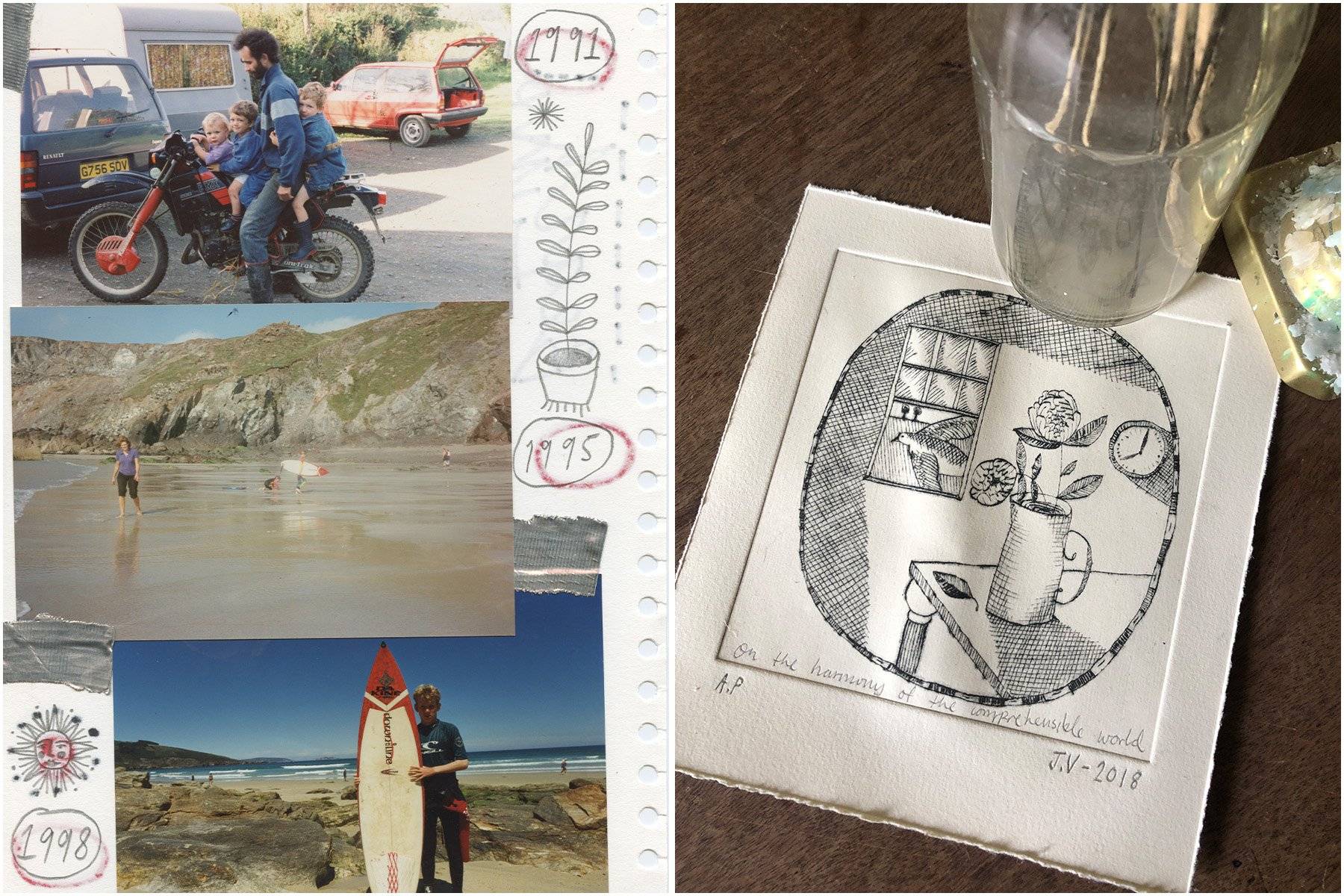 It was in the same period that I found drawing. As a quiet kid, it became my outlet for expression; the more I drew the more I wanted to draw, and it became a compulsion of sorts. At the same time, I was venturing further into the sea. Initially with a shocking pink bodyboard with two skegs, and then with my first legitimate surfboard I began to put strength in my skinny arms and a tan on my pale face. Until the age of twelve I had never surfed anywhere other than the coves a stone’s throw from home. A chance encounter with another boy a few years older surfing a local reef filled me with awe, and later that year I would paddle out wide eyed from the rocks and gaze mesmerized into little tubes spinning down the shallow reef.

My muse was always the sea and the creatures within. Twenty-five years on from the first jump off those rocks, I’m back home and jumping off again, the odd fun surf awaits, but the magic has generally been replaced by a bitter cocktail of anxiety and resentment. I have found some quiet corners in generally sub-par waves and have re-calibrated my concepts of a ‘good surf’. Ironically, I think I’m surfing better for it. We have been down on the creek with my niece turning rocks for eels, but none are home. A naïve part of me hopes they saw sense and stayed in the Sargasso. The school bass used to swarm in the water rushing over the warm riverbed, but they are now far more elusive creatures. In the summer, occasionally we find a corner of the beach alone, but finding a parking is spot is hard, and the beach is generally crowded. Winters have become our time for solitude.

It’s easy to become jaded, but I have found that route to be pretty destructive internally, and deadly to creativity. Through my illustration work I have been trying to tap into that feeling I had as a child, the wide-eyed innocence, or even better, allowing others to tap into that same wonder for a moment.