The Broadcast / Patagonia, I Dreamed Of Abundance | Dan Crockett

Regular visitors to our Broadcast won't be strangers to the words of Dan Crockett. For the uninitiated, Dan is a writer who has been a part of the Finisterre family for many years; joining us on trips and covering many of the different problems facing our seas.

He embarked on his latest trip to Patagonia hoping to see pristine natural landscapes, unfettered by the pollution problems that plague the rest of the world. That was the dream, but reality so often tells a different story; in this case, one where the future of Patagonia's bountiful habitats is hanging in the balance. 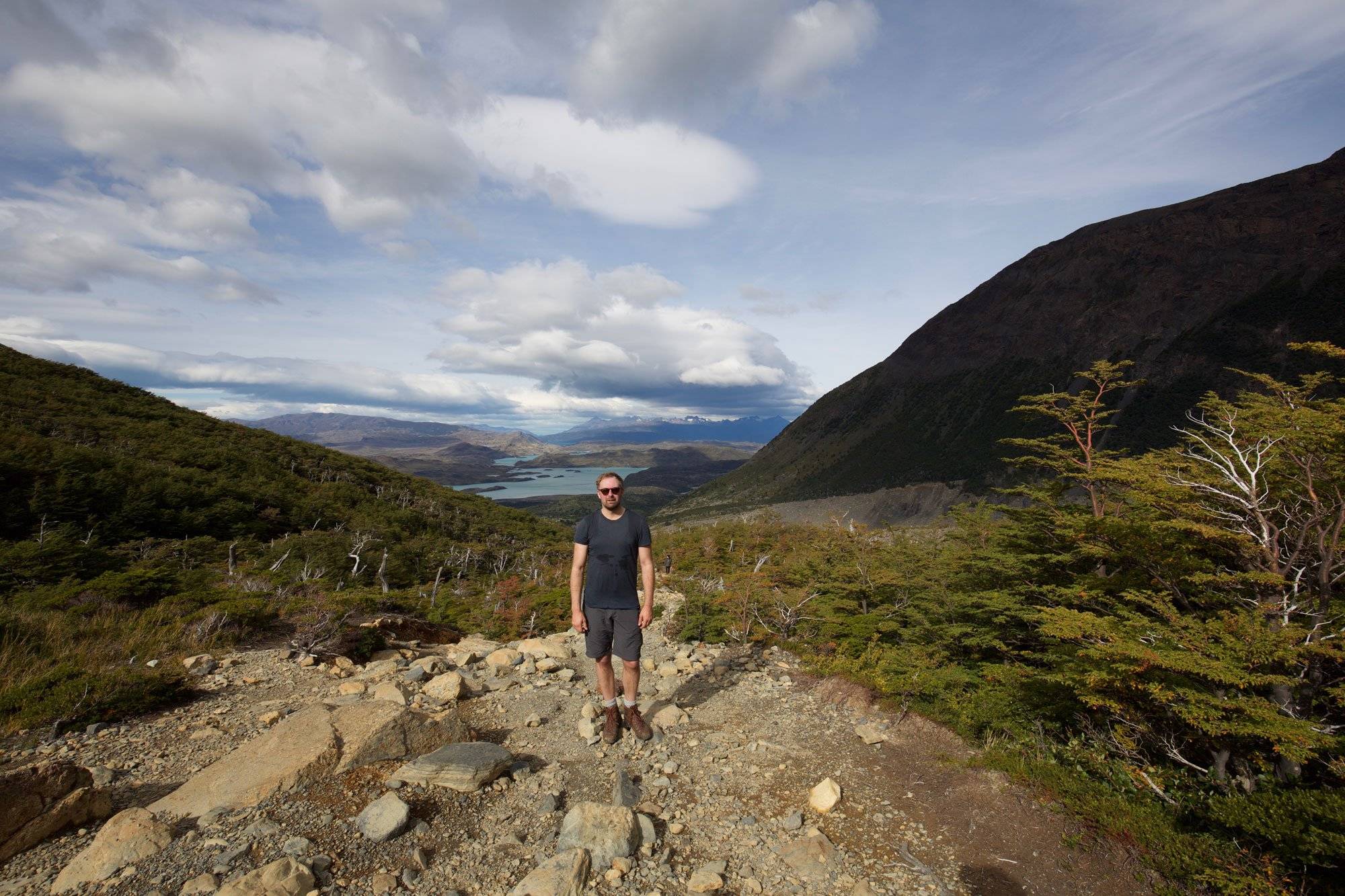 Sei whales are going off like gunshots in the fjord, huffing ten foot pillars of breath that are snatched away by the howling wind. This is a calm day by Punta Arenas standards. Three tiny, endemic dolphins boil on the surface. Paddling across the Lingue river, past a blue boat called Felipe Jesus IV, among a thick school of fry. A huge kingfisher swoops one off with a livid flourish of velvet brightness, the fish squirms in its beak. Six vultures watch impassively from the stern. Out on the bank a thousand seabirds flow into the sky. Los pelícanos, a v of nine, swoop low over the looping first section of the wave. Everywhere are moving things and we are small participants in a great concert of life. Patagonia, I dreamed of abundance.

Pink flamingos a roadside shock, limbs picked out against a slick of bright white salt pan. A valley with the scent of death and in its heart the reason; the carcass of a cow with twenty attendant vultures, sprouting like stalactites before wearily flying away as we approach. A luminescent red chested bird singing on a wire and as day gives way a hundred hares, the solitary beasts on the midnight highway. On Chiloé Island the blunt jawbone of a horse hollowed out and filled with dry beans to be beaten ritually in music that plays between the worlds. The old man will not sing for us except for money, which we do not have. A crescent bay stretches northwards and a dozen pods of dolphins hunt the shorebreak, beyond them huge fish are breaking the surface and on the horizon are whales. Big waves lift fronds of kelp as long as houses. We stand spellbound at all the life before us. We stand at the genesis of one of the great oceanic conveyor belts, the Humboldt current. Patagonia, I dreamed of abundance.

Trying to make headway through the Valdivian temperate rain forest is impossible. A steep jungle trail with the crack of a shallow left on the reef below. Giant angiosperms and the scent of warm eucalyptus. Tsunami evacuation signs point straight uphill. A thousand logging trucks heading north, laden with trunks, to feed paper mills that in turn pollute rivers. Along the pan-am highway, a hundred miles of Monsanto arable land from hell. The trees are dead coloured, stricken by a grey-brown pesticide death in their roots and leaves. There are 30,000 hectares of GMO maize, soy and canola in Chile. A brown trout, fighting for his life, dies gasping, bludgeoned on the side of the rotting hulk of a fishing boat. There are no native salmonids here, which eases the guilt, but what is native now? At the mouth of the river a left cracks against the rocks, waiting for winter sand flow. 7,000 miles of coastline. Patagonia, I dreamed of abundance.

On the Ruta del fin de mundo, lichen hangs off the trees in thick green shrouds, evidence of a lack of pollution. Guanaco are surprisingly big up close. In the shadow of the needles a river of sparkling beauty, a giant yellow salmon hangs in torpor. He is dying. Moths paint the windshield in a way we have quite forgotten, all of our bugs are dead. Under the lighthouse, beyond the beach made up of a million shells, another left rumbles and spits. Senor Apollo barks outside the Quincho in the mornings. A thousand pink buoys bob in the fjords, the fish farms are Patagonia’s dirty secret. Effluent lines the creek. Chatwin wrote of the warlocks who controlled the island, the deliberately deformed invunche imprisoned in a cave and brought out to terrorise the local people. The illegal fishing vessels use cut-up Humboldt penguins and dolphins for bait to catch king crab. Of the 25 key fish species, 16 stocks are collapsed. Rusting fishing boats fill the fjords. Patagonia, I dreamed of abundance. 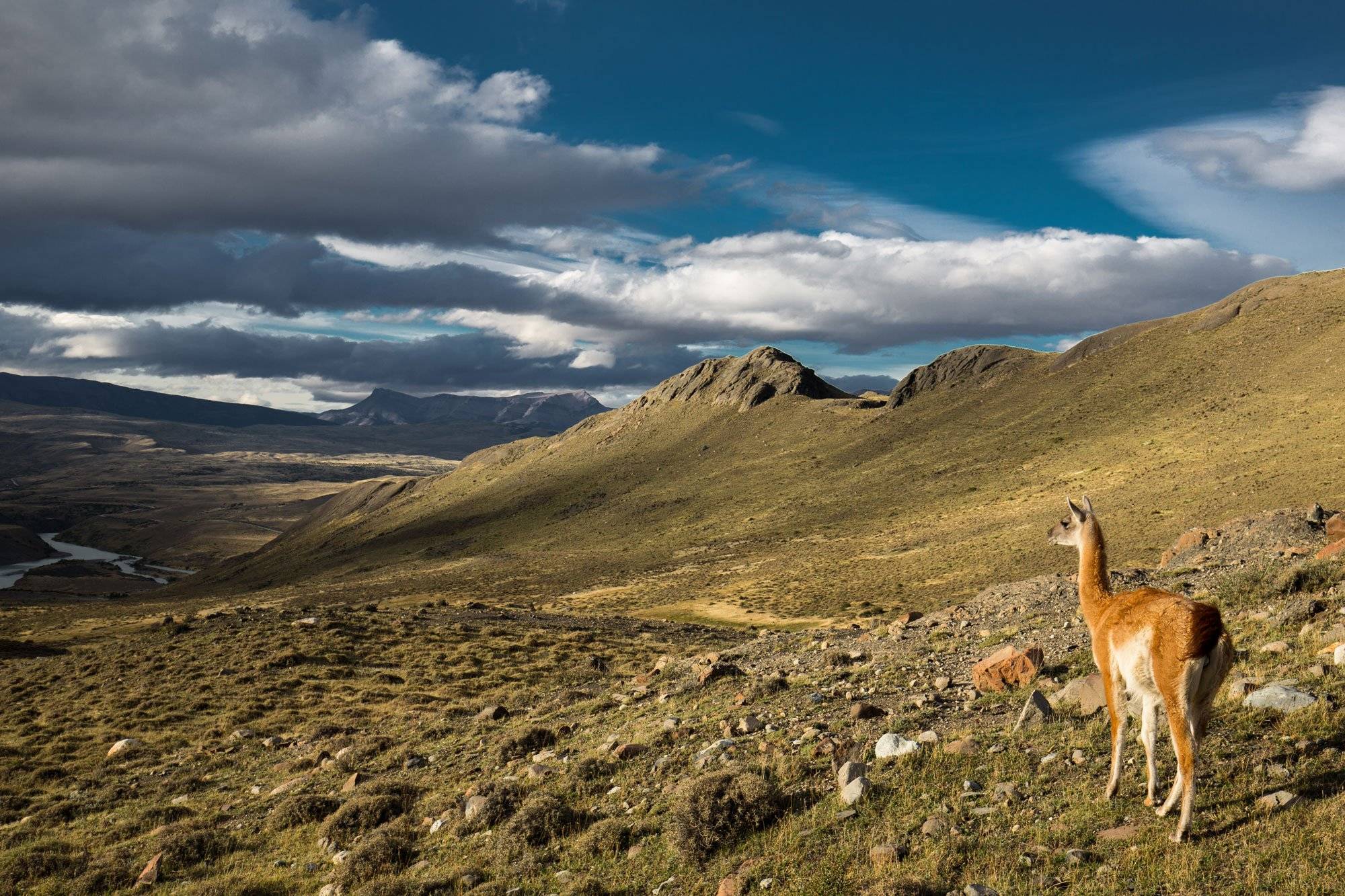 We shake hands with a man from Isla Madre Del Dios, a 26 hour ferry ride from Punta Arenas. He shows us photographs of a condor, stark obsidian against turrets of white rock. A bauxite mine in a fjord. In the caves are the bones of old whales and the Kaweskar people. In the shops in Punta Arenas they sell prints of the painted bodies of the Haush Indians of Tierra Del Fiego. On remote and freezing shores they foraged and hunted seals and guanaco, adapting to one of the harshest climates on earth. There were only 300 of them and much about their culture was never known. Disease and persecution rendered them extinct in the 1920s. What a world they must have known. Patagonia, I dreamed of abundance.

“It is a cancer eating our country,” a local woman says of salmon farming. It is the second biggest business in Chile but the Chilean people are small consumers of salmon. Unregulated antibiotic and pesticide use pollute closed fjord ecosystems that naturally teem with life. Under the farms, dead zones are created, anoxic and hypoxic areas where nothing can survive. Sick and mutated fish are shielded from public view. Some escape to predate native fish. The concession system is openly abused. The farms are creeping south from Chiloé and north from Punta Arenas into previously unoccupied areas, which happens to be some of the most magnificent, pristine fjord-land on the planet. The cancer isn’t confined to the ocean, it destroys local communities. The money comes from outside. Much of the labour is shipped in and the profit shipped out. Nobody dares speak out and those that do are choked of budget and silenced. Guerrilla stickers and posters – no salmonistas. Patagonia, I dreamed of abundance. 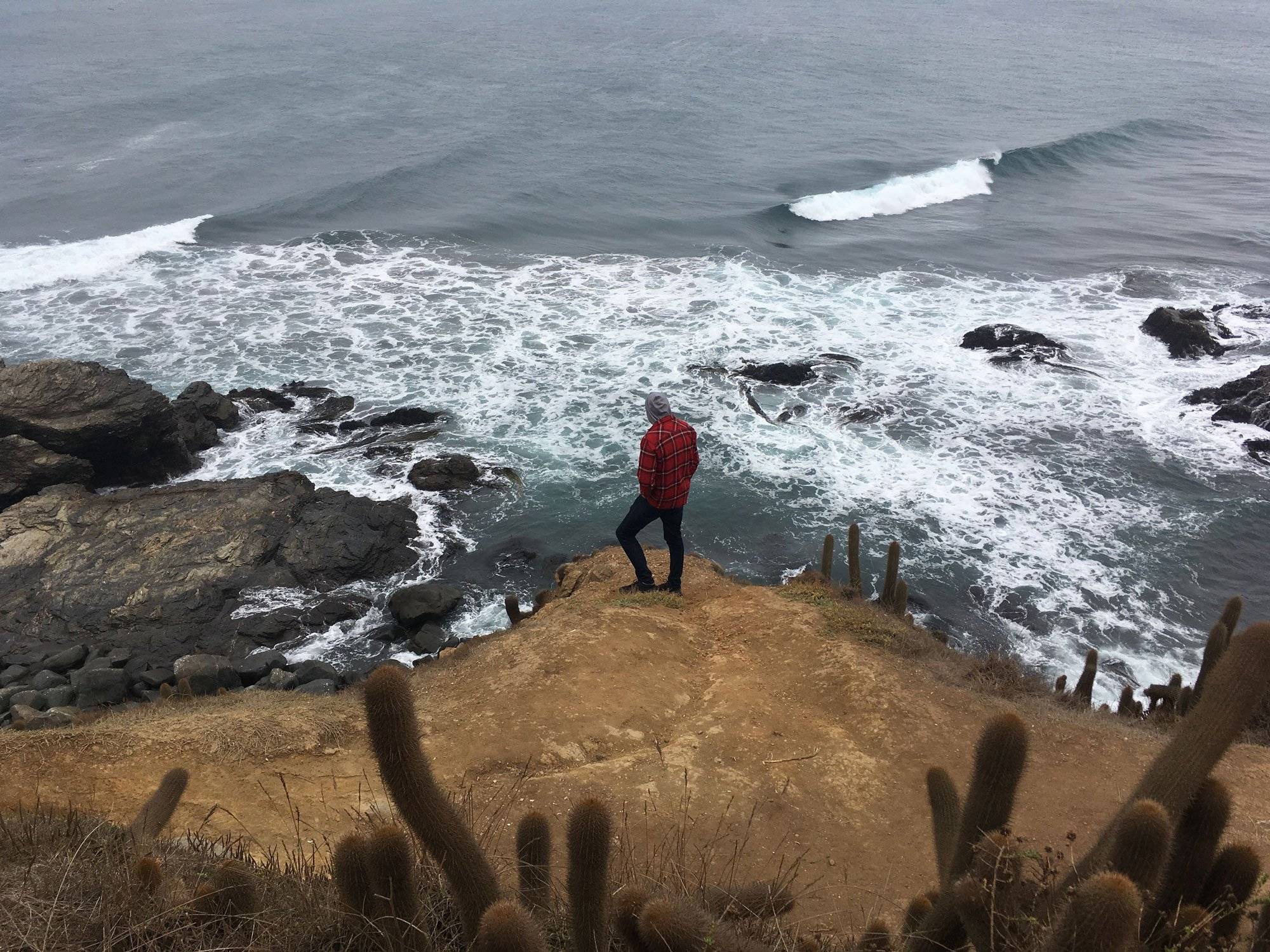 The sand is stacked up and the takeoff behind the rock is doing a passable impression of a reverse gold coast point. Thick little nuggets that race and gather over the sand, complex for a regular-footer. A couple of guys make it look easy, getting buried in the dawn mist, engulfed in grey walls. The black sand and black rock and sealions all absorb the light. Within an hour, twenty Argentinian guys staying in the Hospedaje have swarmed all over it in a pack. It’s easy to get out, we didn’t come here for waves. We came to understand the threats to marine life which might look abundant to our eyes, this being one of the most productive ocean ecosystems on the planet. But the dream of abundance, dead and forgotten in so much of our ocean, hangs by a slim thread in Patagonia.