The Broadcast / A Tidal Voyage: The Atlantic

A Tidal Voyage: The Atlantic

Seeking a different way of life for their young family, William Thomson, the founder of Tide School, and his partner Naomi have spent over a year preparing an epic voyage. In the first of a three part series, tracking their journey from Cornwall to the Mediterranean, William recounts the joys and challenges of their maiden crossing of the Bay of Biscay. 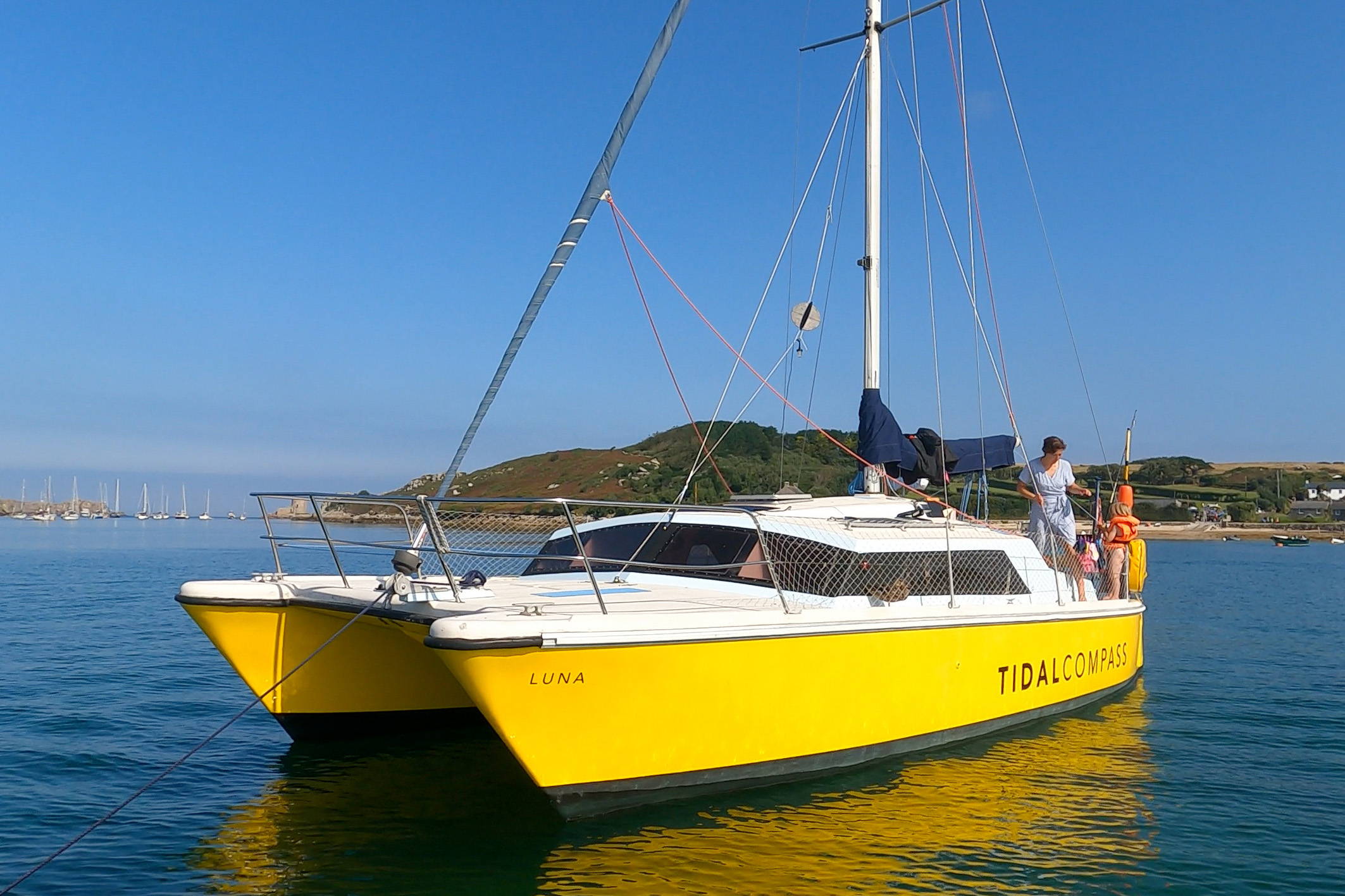 With moonlight illuminating our anchorage in the Isles of Scilly, Herby took her final flight over British sand. At five months old she was a pet like no other; we had rescued her as a week-old Mallard duck left to die by her mother in Weymouth Harbour, the sole survivor from a brood of twelve. The others had been eaten by seagulls, drowned or frozen to death - but Herby was a survivor and now she travelled with us, exploring the Cornish coast and venturing out into the Atlantic aboard our bright yellow catamaran Luna. Since learning to fly a month before, at every new harbour she would jump out into the cockpit, feel the wind and then set off on loops around the boat; starting small but getting progressively bigger until she was out of sight. Those were always tense minutes when we could not see her, but she returned every time, coming from downwind with a loud quack and a flash of white from her outstretched wings as she controlled her descent back onto the boat, carefully avoiding the maze of rigging in her path. It was a joy to behold and always ended in a family celebration – the kids hugging her, Herby chirping with pleasure.

After years of planning and preparation, it was amazing to finally sail south. I had been dreaming of this since Ottilie was just a bulge in Naomi's tummy, but at the time the challenges of learning to sail and getting hold of an ocean-going boat seemed too great, so we opted for a van instead. But the camper never quite scratched the itch and I yearned for the freedom of the open sea. My vision was to use sailing as a platform for educating the kids, learning maths through navigation, history from visiting ancient castles and languages by exploring new countries. As an additional bonus, my business 'Tide School' is about sharing the ways of the sea, so living on a boat would give me the opportunity to boost my own learning and share it through Tide School. There were also the simple pleasures of boatlife that appealed; diving off the bow for a morning swim, laying out in the cockpit to stargaze, rowing ashore for beach barbecues on remote islands. 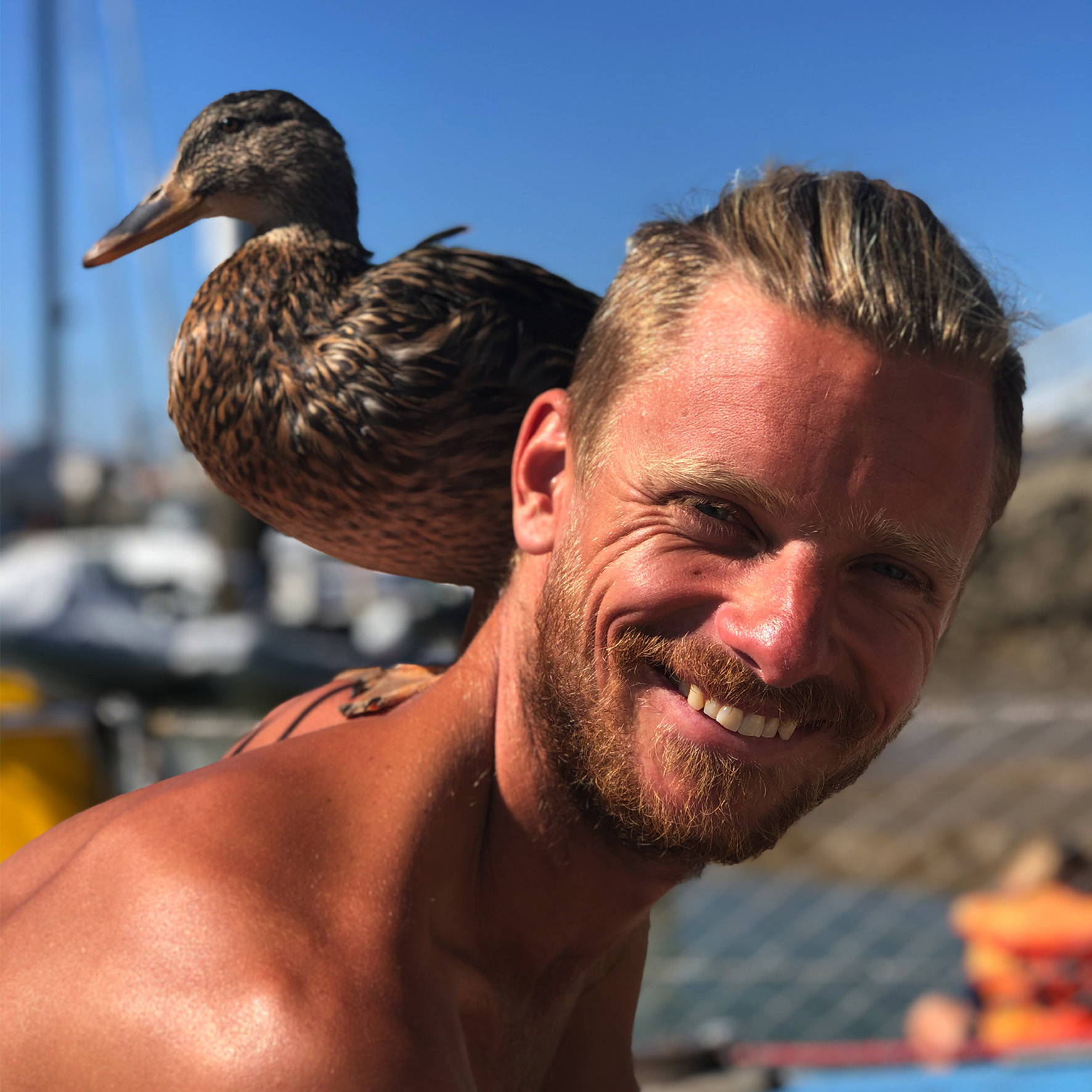 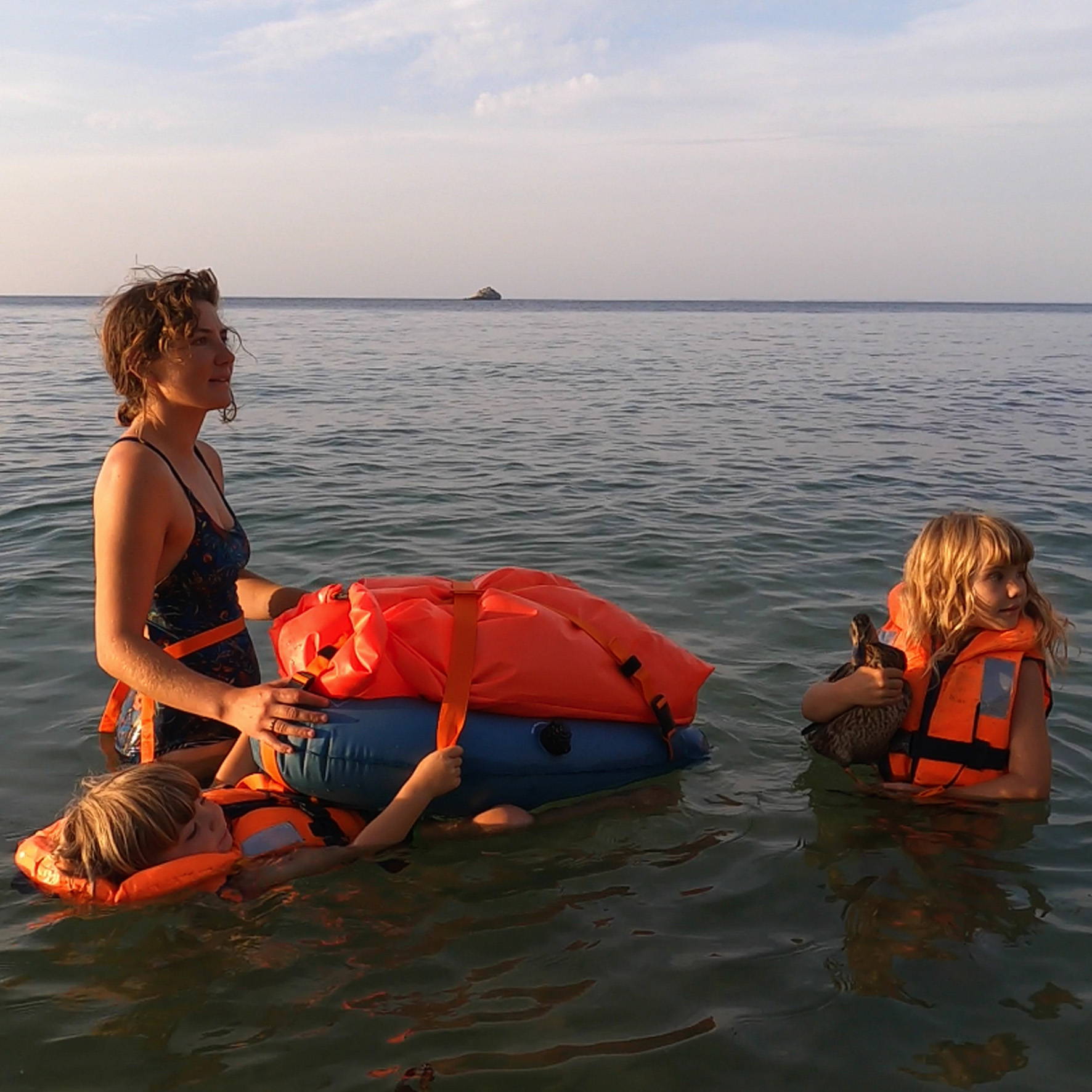 With Herby’s morning flight ticked off, we weighed anchor under a starry sky and set a course south-south-east. Our destination was Cape Finisterre, a wild headland 120 nautical miles across an empty windswept sea, broken only by the occasional dark speck on the horizon that quickly grew to reveal a huge cargo ship ploughing through the water at over 20 knots, often passing just a few hundred of metres away. As the day wore on and waves swept over the deck, there was no sight of land in any direction and our only sense of progress was the sun moving across the sky until it finally descended beneath the western horizon. We could have been anywhere in the world, were it not for a small dot showing our GPS position slowly getting closer to the tide-swept French coast. So with faith in our navigation we continued into the night, a blackness broken only by the flashing of buoys with unique sequences that allow you to pinpoint their locations on a chart splattered with rocks.

By taking the buoys one at a time we weaved through the razor-sharp coast of Brittany and at 4am we dropped anchor in a small cove 48 degrees 24 minutes north, 004 degrees 46 minutes west. Naomi and I had been hand steering for twenty-four hours (Luna does not have autopilot) and we were exhausted, but with daylight the kids woke us up, full of energy and excited by the view; a wide sandy beach was flanked by tall cliffs and the cove was filled with small boats flying French flags. We had crossed the Channel! But we still had a long way to go and at mid-night we set off once more, timing our passage through the notorious Raz du Seine tide race for Slack Water when the tidal streams are at their slowest. This is not a place to treat lightly - a few weeks later we met a couple who had accidentally gone through at maximum flow and they were battered by overfalls for three hours, ending up wrecked on the rocks. Luckily, tides are my speciality and we passed through at the opportune moment. But it’s not an adventure until things go wrong and our time came later in the day when the engine died just as we were approaching the reef-strewn shore. 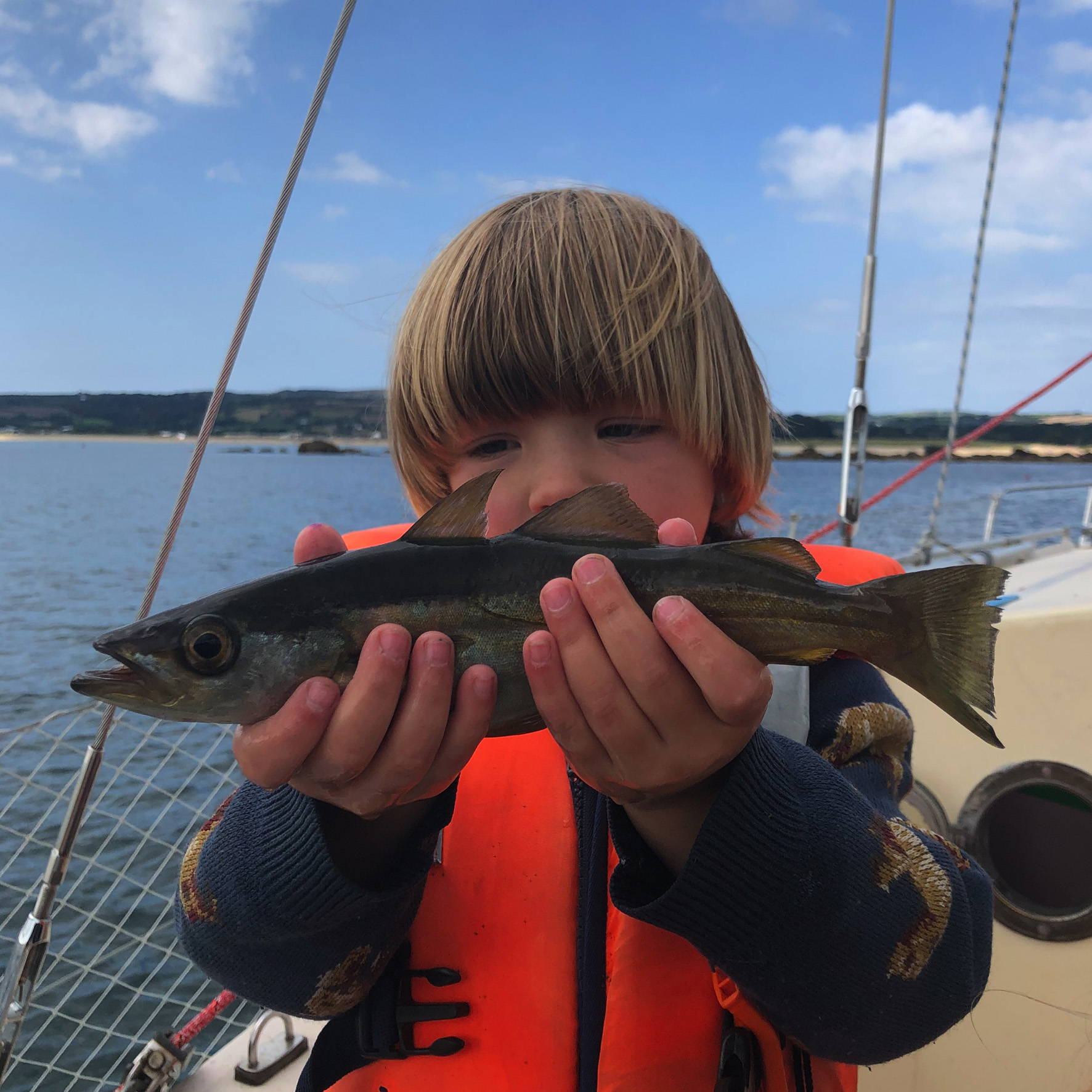 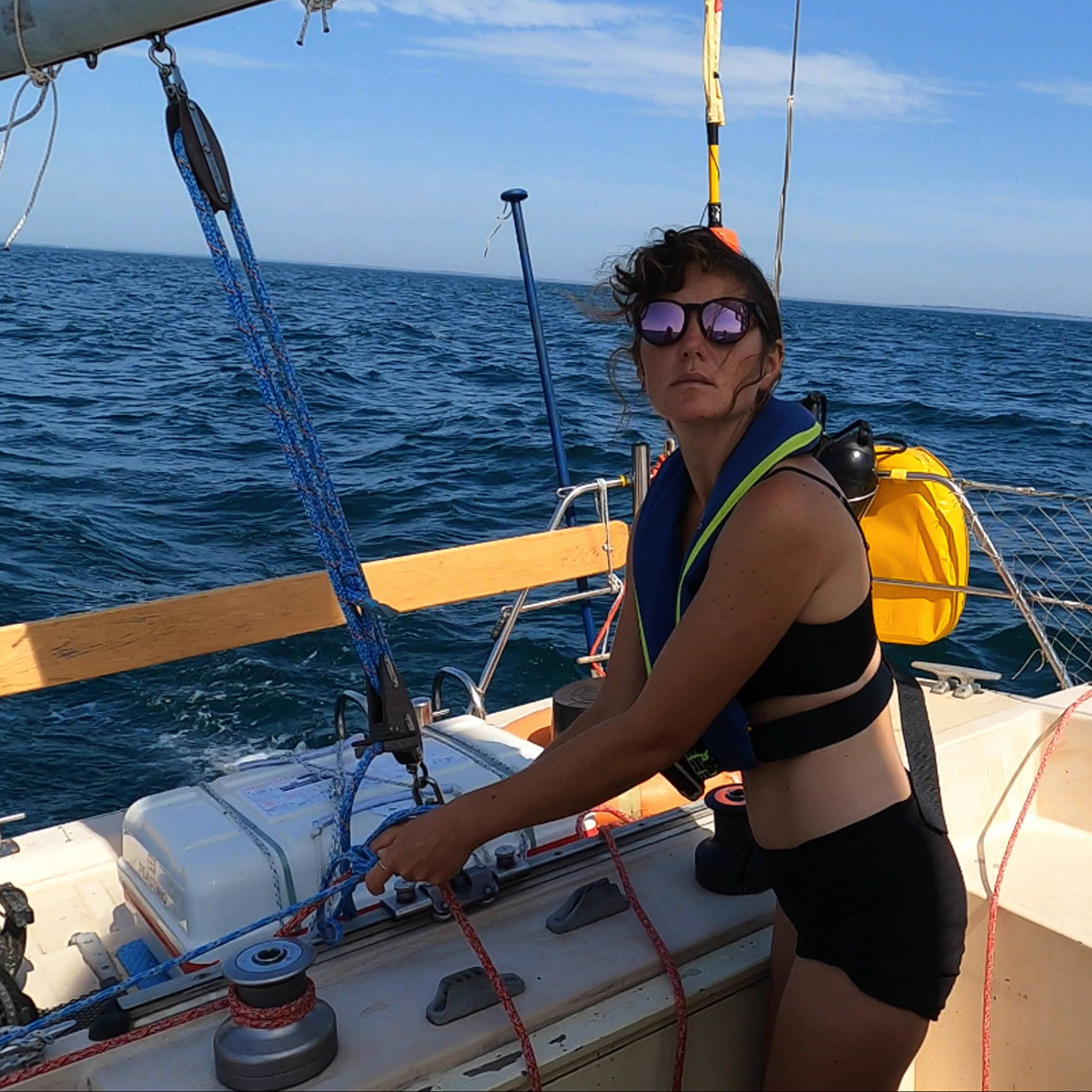 With strong cross-currents and rocks all around, the safest course of action was to sail out to deep water and try to fix the engine, but I could not get it going. So after checking the forecast we decided to head for Belle Isle, 50 nautical miles away. It would mean a third consecutive night hand-steering, but the route was free of dangers and we could anchor under sail in the sheltered lee of the island, going ashore in the MiniCat to pick up any parts needed to fix the engine. However, as the night progressed the wind increased to Force 7 (twice as strong as forecasted) and waves broke the steering joint of our outdrive. This was a huge blow because I would not be able to fix it at anchor; we really needed to get into a harbour. So with a damaged boat Naomi and I spent a terrible night huddled in the cockpit, desperately trying to keep Luna on course for Belle Isle as she was battered by the storm. But the wind was also more easterly than forecasted and as the night wore on and our fatigue grew, we were pushed further away from land and out into the Bay of Biscay.

To cut a long story short, we got as close to Belle Isle as we could and then received a tow into the harbour, where it took me three days to fix the engine and outdrive. With a better understanding of Luna’s engine and a growing confidence in my own mechanical skills, we set sail once again and island hopped down France’s spectacular Atlantic coast. Island after island, we would anchor in breathtakingly beautiful bays, swimming ashore with our RuckRafts through crystal clear water while Herby flew overhead. It was pure adventure, just what I had dreamed of. Even the hard parts were phenomenal; one night, a thunderstorm came through at 2am so I went out in the lashing rain and howling wind to double check the anchor and let out some line. As I reset a triangular bridle from each bow and dropped it into the water, the rope set off an intense glow of phosphorescence, descending deep underwater towards the anchor. As I there stood in awe, almost disbelieving what I was seeing, lightning started to explode all around, creating a light show that will be etched in my memory for many years to come. 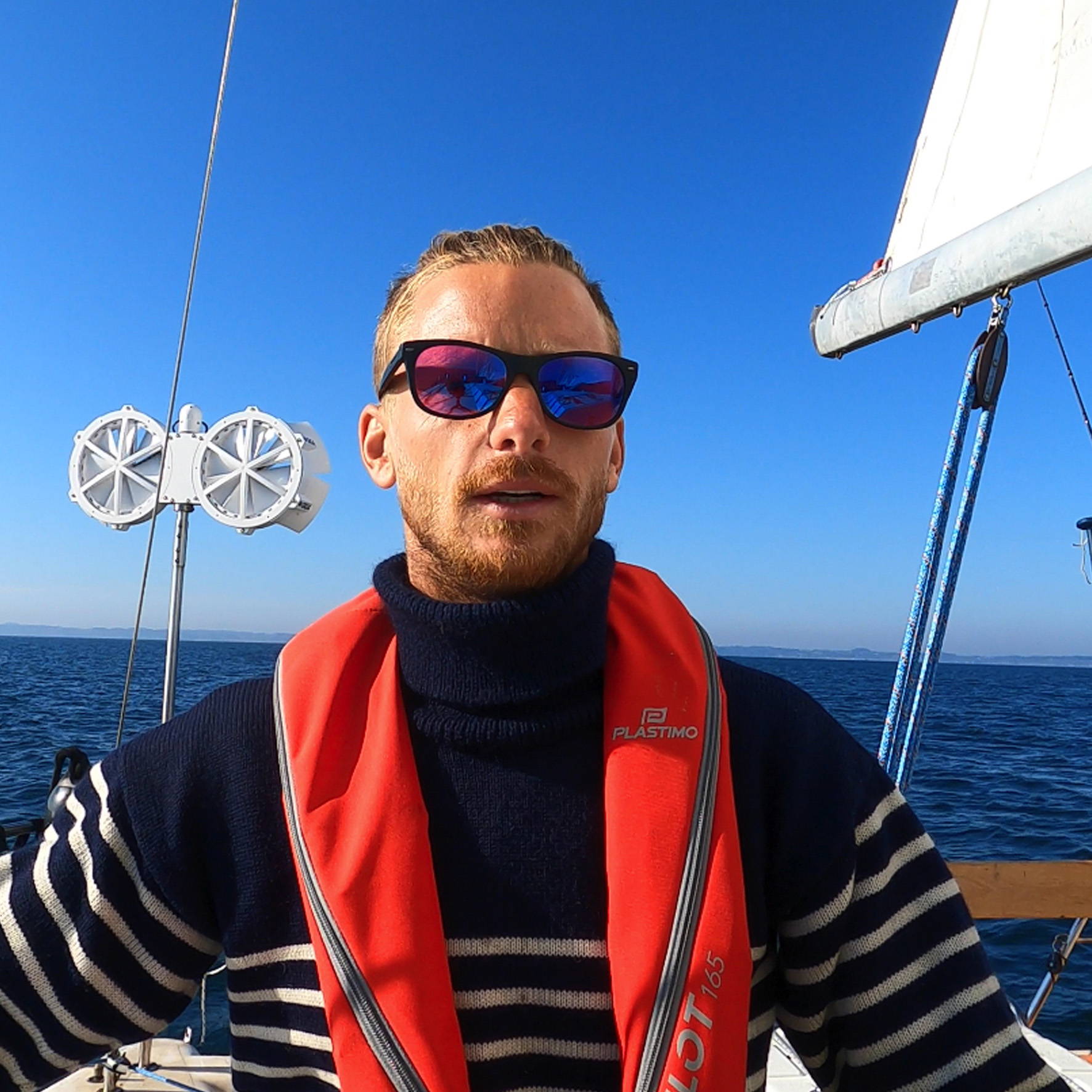 William dons the Finisterre Submariner jumper as they head out to sea. 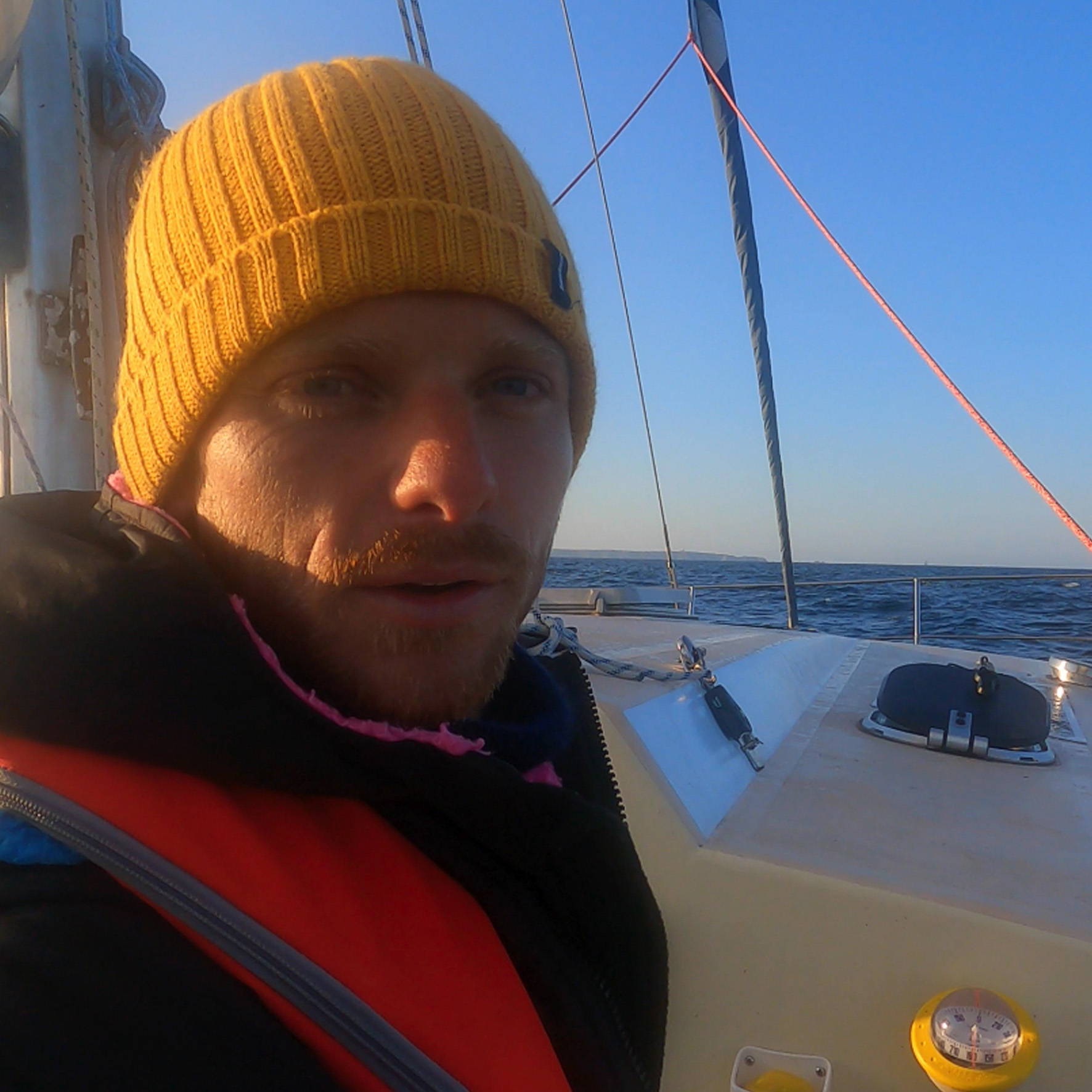 By the following morning the storm had passed and we continued south to Royan, a safe harbour near the mouth of the Gironde Estuary in South-West France. This was the most technical part of our voyage because we needed to sail all day in powerful tides and swells, then arrive at the entrance to the Gironde within a half-hour window to avoid dangerous overfalls. As the guidebook warned, “The Gironde is as difficult an entry as you will find anywhere in the world…and under the wrong conditions can be fatal for a small craft”. With this in mind it was imperative we maintained 5 knots, but the wind dropped and we had to use the motor to maintain speed, but fuel started spurting out of a joint in one of the filters. Unable to turn back because of the powerful tides pushing us along, I made a temporary fix of the leak and we kept going, hoping for the best. It was a tense six hours but my repair held and we made it to the safe water buoy at the mouth of the Gironde just in time. And with this stoke of good luck the tide literally turned in our favour; the wind picked up to Force 6 and we flew up the estuary at nearly 10-knots as huge waves broke right on the edge of the channel. It was a euphoric moment and symbolic of our adventure; you’ll get extreme highs, but just don’t expect it to be plain sailing.

Keep an eye out for the next instalment; Canals De Deux Mers.