Some of the greatest discoveries in our lives are unplanned. Serendipitous events leading down unimagined paths. In an exclusive extract from her new book, Saltwater in the Blood, Ambassador Dr Easkey Britton touches on one such event; the start of her journey to becoming a big wave surfer

Other images in order of appearance: Chris McClean, Christian McLeod 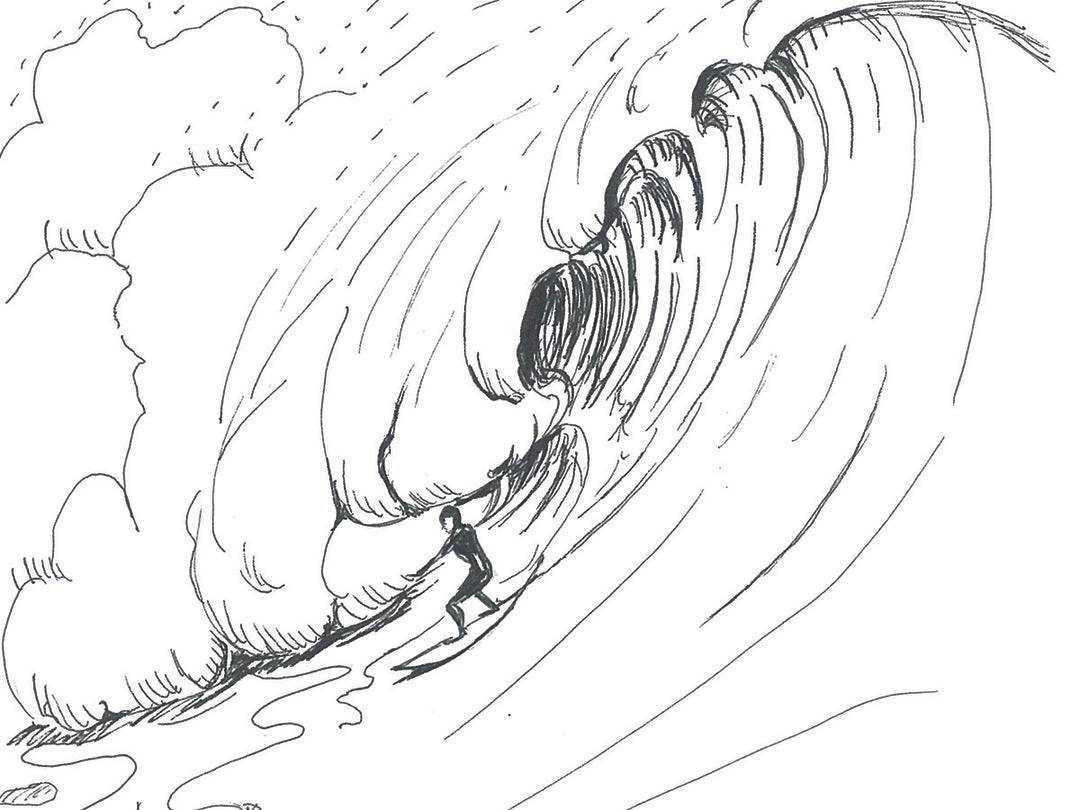 It was never a plan; like a lot of things in my life, it wasn’t as if I clearly laid down the goal, “I want to be a big wave surfer.” It came about through a combination of being at the right place at the right time, a life-long sea obsession, growing up around heavy water, following my father into the sea, knowing the right people and luck.

In surf media, big wave surfing has typically been portrayed as the hero overcoming the monster, a hyper-masculine portrayal of a “dragon-slaying” pursuit that is at odds with what is in reality a highly intimate act of both commitment and surrender. The actual experience is often one of coming together, if you will, of both masculine (doing) and feminine (being) energies, with feelings of oneness and bliss or “stoke” not uncommon in reports from surfers following a big wave day.

My experience of big wave “tow surfing” in winter on the west coast of Ireland taps deeply into an embodied experience of the world. “Tow surfing” or “tow-in surfing” is the term used to refer to a highly specialised form of extreme surfing in big waves, usually greater than twenty feet in height, often much bigger.

A jet ski, with a tow rope extended out to the surfer is used to assist the surfer in catching the wave in situations where the swells are considered to move too fast to be caught by the paddle power of the surfer’s arms alone. The kind of swells that generate breaking waves of this magnitude are rare and might only occur a handful of times in a given season and only at a few remote locations around the world, known as “big wave spots”. The surfers who ride these waves require in-depth local knowledge for how each of these spots work, including the necessary conditions (wind direction, swell size, tide, etc), and they also undergo intense physical and mental training and preparation to ensure safety in a high-risk environment. This is a process that can take years and is continuous. 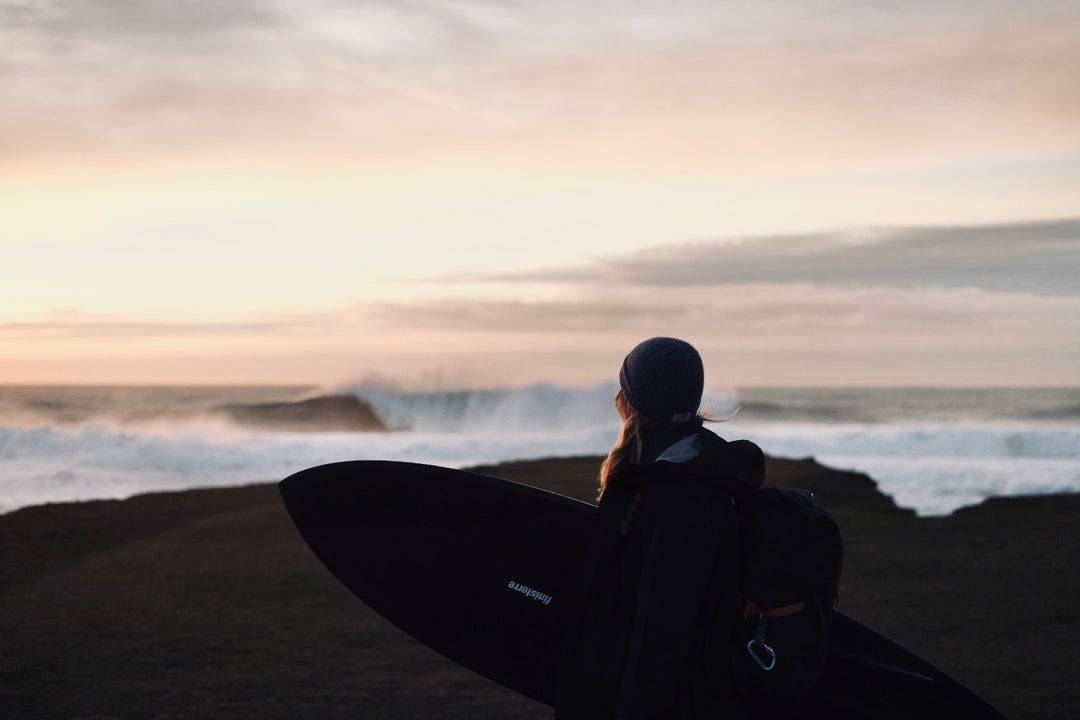 In 2007, the documentary Waveriders was being filmed in Ireland. Waveriders tells the story of the roots of Irish surfing, tracing them back to Irish-Hawaiian waterman George Freeth. The documentary also celebrates the importance of friendship when it comes to pushing the limits of surfing. Surfing in Ireland was changing that year. Surf breaks were starting to become more crowded and there was a small group of us who decided to explore places that were previously inaccessible, made possible with the arrival of the jet skis.

The Malloy Brothers, three professional surfers and siblings from California with close ancestral ties to Ireland, were visiting at the time. I had met them years ago at The Peak and over the years they had played the role of big brothers, especially during the more vulnerable and exciting times in my life when I was travelling solo as a young woman. I got a voice message on my phone from Chris Malloy, the eldest brother, saying they were in Co. Clare and going to surf the cliffs the next day to shoot surf scenes for Waveriders. I’d heard the stories about how understated, trailblazing waterman, photographer and surfer Mickey Smith from Cornwall and some of the local lads had pioneered this crazy wave at the bottom of the Cliffs of Moher, called Aill na Searrach, more commonly shortened to “Aileen’s”, just that winter, but I hadn’t seen it with my own eyes, yet.

Mickey has a way of drawing out the beauty of the dark and unforgiving, bone-breaking waves he has pioneered off the west coast of Ireland. He captured his experience of these wild seas and heavy water, weathering the storms for rare glimpses of the magic and wonder they instil, with refreshing honesty in the film Dark Side of the Lens, to worldwide acclaim. It is a wonderfully intimate and moving portrayal of a human relationship with the sea, narrated in his own words:

“My heart bleeds Celtic blood and I am magnetised to familiar frontiers: broad, brutal, cold coastlines for the right waveriders to challenge. This is where my heart bleeds hardest.”

It was exciting that the discovery of waves of this power and magnitude could happen in my own backyard. My phone went off again, and Chris talked me out of driving back north to university in Coleraine and to come west to Clare instead. It didn’t take much persuading, to be honest. I still had no intention of actually surfing it; I was happy to be an observer and watch some of the best in the world do their thing. I was part of the water-safety crew in the channel, floating there for hours, watching the most stunning waves I’d ever seen in my life. It was like falling in love, an intoxicating feeling of wonder and mild terror at losing control of oneself.

And that was just from watching it, from witnessing the wave breaking. It’s an amazing experience to just be there next to a wave that powerful. I could feel the wave, and all my senses were firing.

It wasn’t until near the end of the session, with the light starting to fade, jet skis running low on fuel, that my friend, American surfer Dylan Stott, came and said, “Right, Easkey, let’s go!”

Editor's Note: the below image is Easkey surfing Mullaghmore, not Aileen's.
You get the picture though... 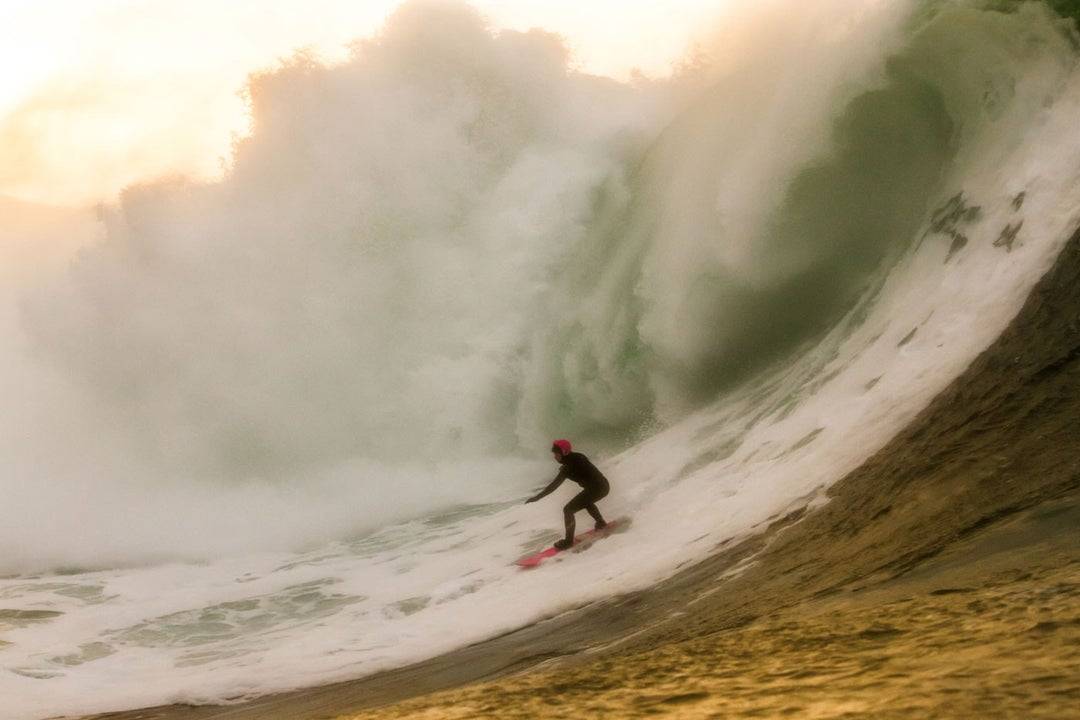