Friends, food and fire - what more do you need? As part of a new Broadcast series, chef Ben Quinn will be breaking bread (and cooking it up, on occasion) with friends near and far and bringing woodfired recipes to the metaphorical table. 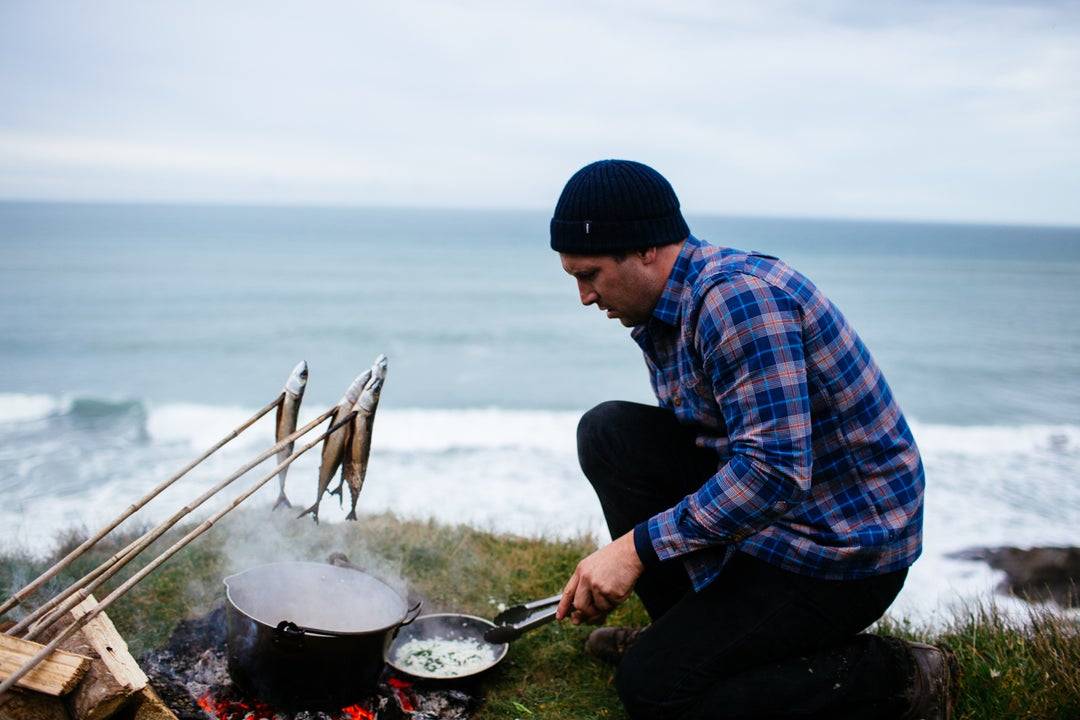 You’ll usually see Ben Quinn standing over a fire, shuffling meat and stoking the flames. Otherwise you might catch him in the lineup down at his local watering hole, just minutes from Finisterre HQ. Whether he’s in the surf or cooking up outside, community is at the heart of what he does.

With a cooking pedigree that has seen him working with the likes of Honey & Co, Jamie Oliver and Meatopia, and a brother cheffing at the world-famous River Cafe in London, it’s clear that a love of food runs in and through his blood. Having run his own business for the past five years, his latest venture, Woodfired Canteen, is all about telling stories through food.

“The whole process has taught me that the story is just as important as the plate of food; and telling stories around fires to good people leaves more than just a full belly. Community: that’s what I feed off of."

We’ve known Ben for a while now and count ourselves lucky to eat his food on more than one occasion (Taco Tuesdays have become somewhat of a regular occurrence at the workshop). A fine man both in and out of the water, his excitement for friends, food and family in Cornwall is infectious.

"The reason to live in Cornwall is family,” he says. “Nature on your doorstep, surf on tap, and a likeminded community all make being a family down here, better and easier.”

Joining us on the North Coast for a couple of days of wild waves, Ben returned the favour by cooking us up some tasty local fare, and was kind enough to share the recipe with us. We can but try. 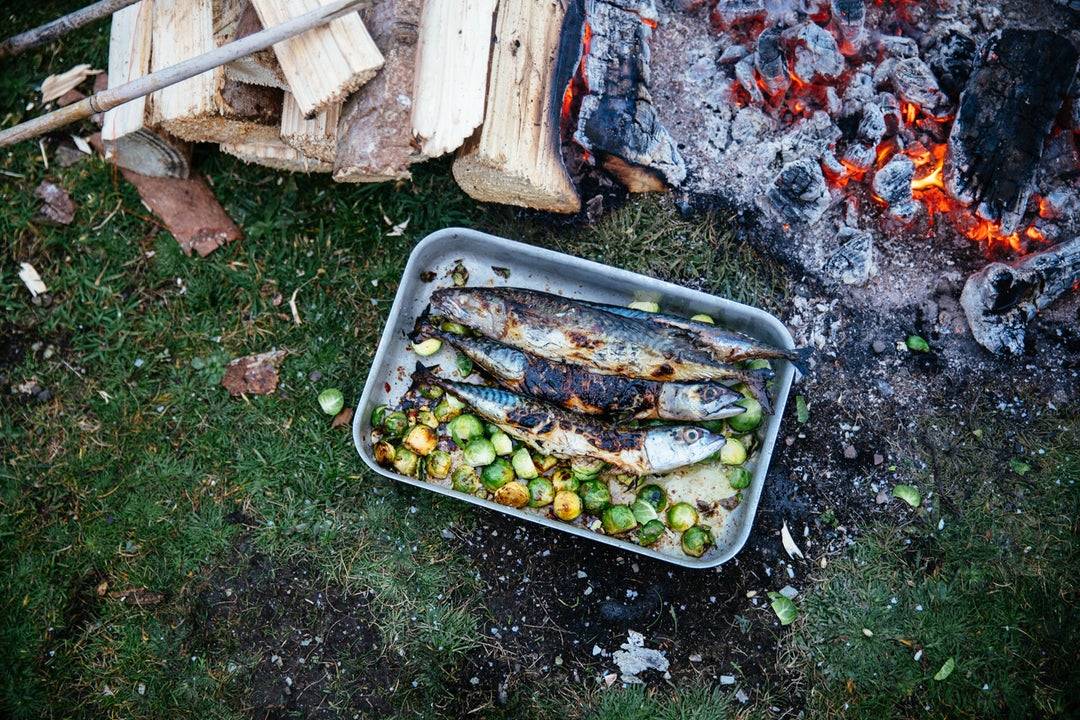 Begin with two handfuls of kindling and start a ten inch circumference fire. Once you hear the first cracks of woods, add four inch thick of hard wood keeping space for air to flow. Watch for these to catch - it should take about twenty minutes. Then add six inch thick pieces of hard wood, again making sure there is good air flow.

After forty minutes the first coals should be ready in your fire. Divide the fire in half and place fresh hard wood on one side. Use the other side to set up the pan for pearl barley, directly onto the coals and for the beetroot to cook in the cinders.

For the mackerel, use four 3-4 foot sticks - that will sustain the weight of the mackerel on the end. Simply pierce the mackerel head with the stick and hang over the fresh fire, 2 foot above the heat.

Make sure this fire has regular pieces of hard wood added to it so that smokes rather than burns. 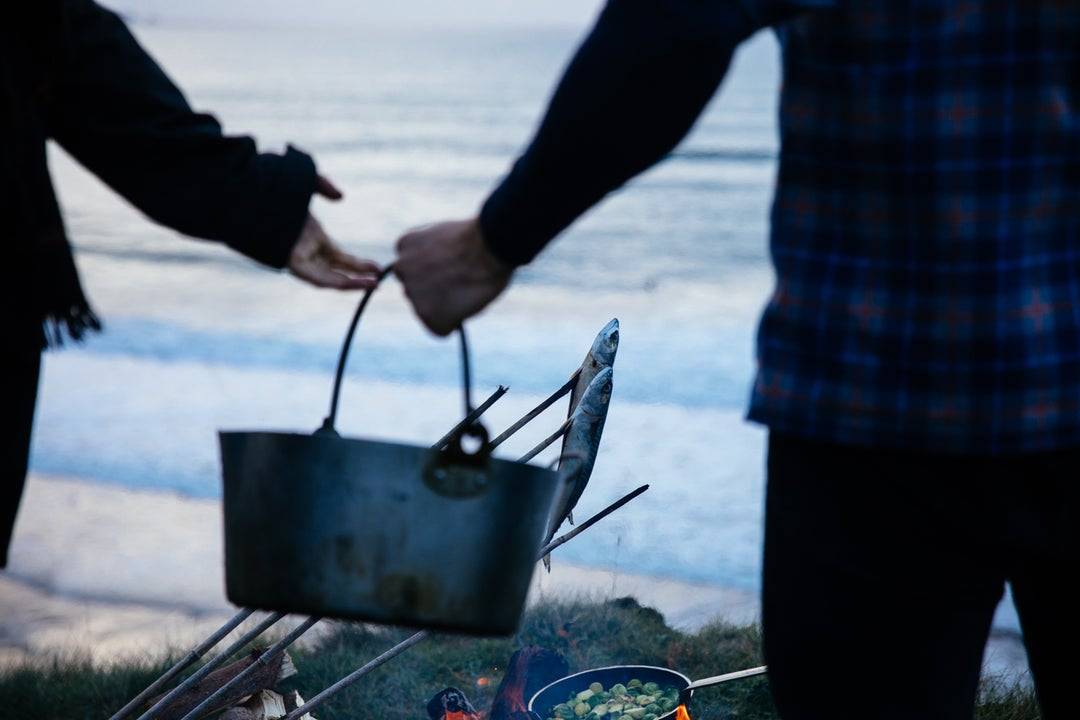 Smoked mackerel is a mainstay to my food in Cornwall. It’s full of flavour, rich and salty. It’s something I always have at hand. We are lucky enough now to be able to buy sustainably caught and smoked mackerel from most supermarkets, but for an amazing experience there’s nothing quite like smoking your own.

To smoke your own mackerel: the mackerel needs to be gutted and cleaned. I like to leave the head on because it makes it easier to smoke over an open fire simply using sticks.

Start by brining your mackerel in half a pint of cold water with one tablespoon of salt, one of sugar, for about half an hour. Pat dry. Smoke high over the fire for forty minutes. Look for cooked-through eyes and feel for firm flesh. Don’t be put off by the odd singed tail - mackerel is full of Omega 3 oils which are really good for you and excellent at keeping the flesh moist.

You know you’ve cracked this when the beautiful skin goes an amazing golden copper colour.

While the mackerel is smoking, get started on the pearl barley. 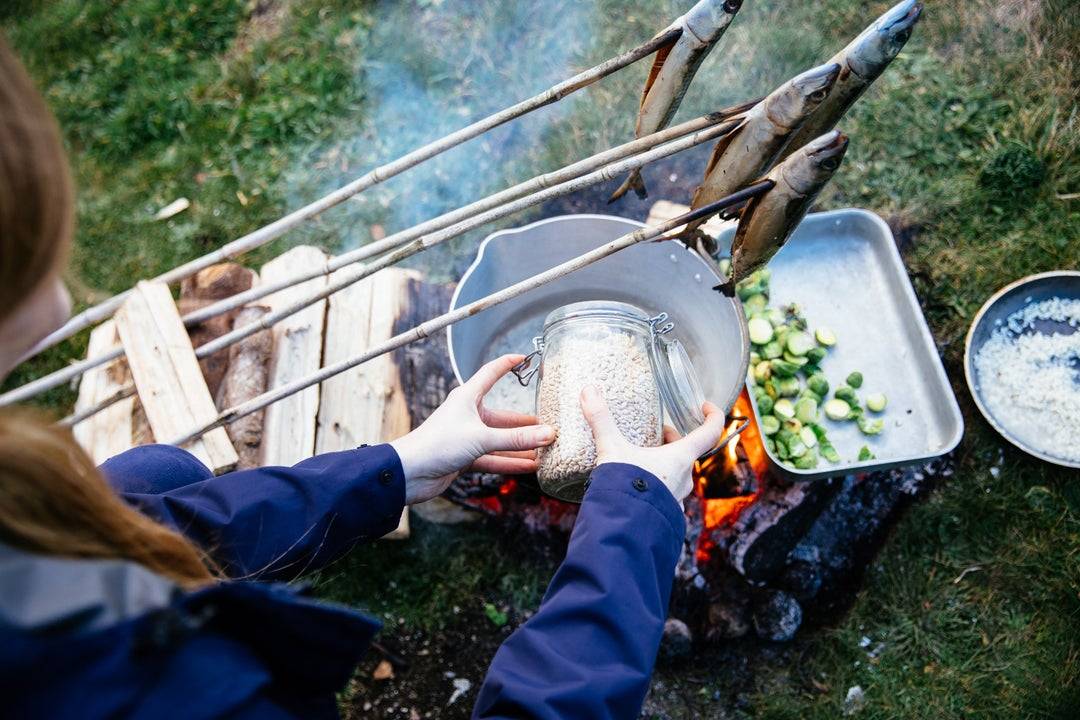 Bring to the boil 8 cups of sea water in a heavy based saucepan that you don’t mind getting a bit sooty; once on a rolling boil add four cups of pearl barley and simmer for forty minutes.

Test the barley for doneness - it should be soft to the bite but not mushy.

For the sprouts, simply half, trim and pan fry until a good amount of colour. I like to see my sprouts properly burnt on the edges. It offers a wonderful caramelised flavour that goes so well with the earthiness of the beetroots. Then dress with pickled chilli and season to taste.

You can make the pickled chilli at home - it’s a great thing to have in your larder to add something more to a dish. It lasts ages and travels well. You can use a knife, pestle and mortar or a blender to finely chop chilli and add cider vinegar, caster sugar and salt to taste. Then top with olive oil.

For the beets, simply place around the edge of the fire in the cinders and turn every so often. Your beets will turn black - they will look burnt and typically you would have thrown them in the bin. Do not worry, under that crust is a perfectly steamed beetroot.

After twenty minutes, insert a knife - it should go in easily and when the blade is placed on the top lip, the blade should feel hot. 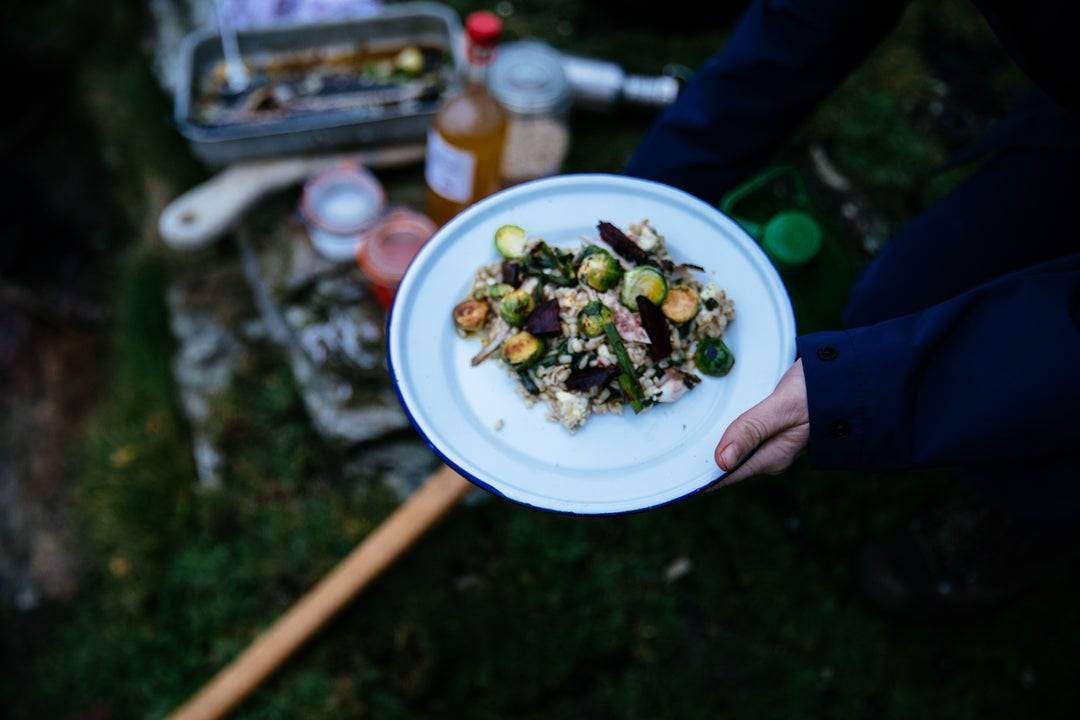 To bring the dish together: crumble the blue cheese into the barley and stir to a creamy texture; season to taste.

Peel the beets and roughly chop with spring onions, cider vinegar and plenty of salt. Flake the mackerel into large pieces.