The Broadcast / Artist Tees | The Rime Of The Ancient Mariner

Artist Tees | The Rime Of The Ancient Mariner

The Rime of the Ancient Mariner is probably Samuel Taylor Coleridge’s most famous work. Steeped in mystery, intrigue and with hints of the supernatural, the poem was first published in 1798 and tells the tale of a Mariner who stopped a man on the way to a wedding to tell him of his experiences at sea. At the end of the encounter, the wedding guest parts a somewhat sadder, yet wiser man. 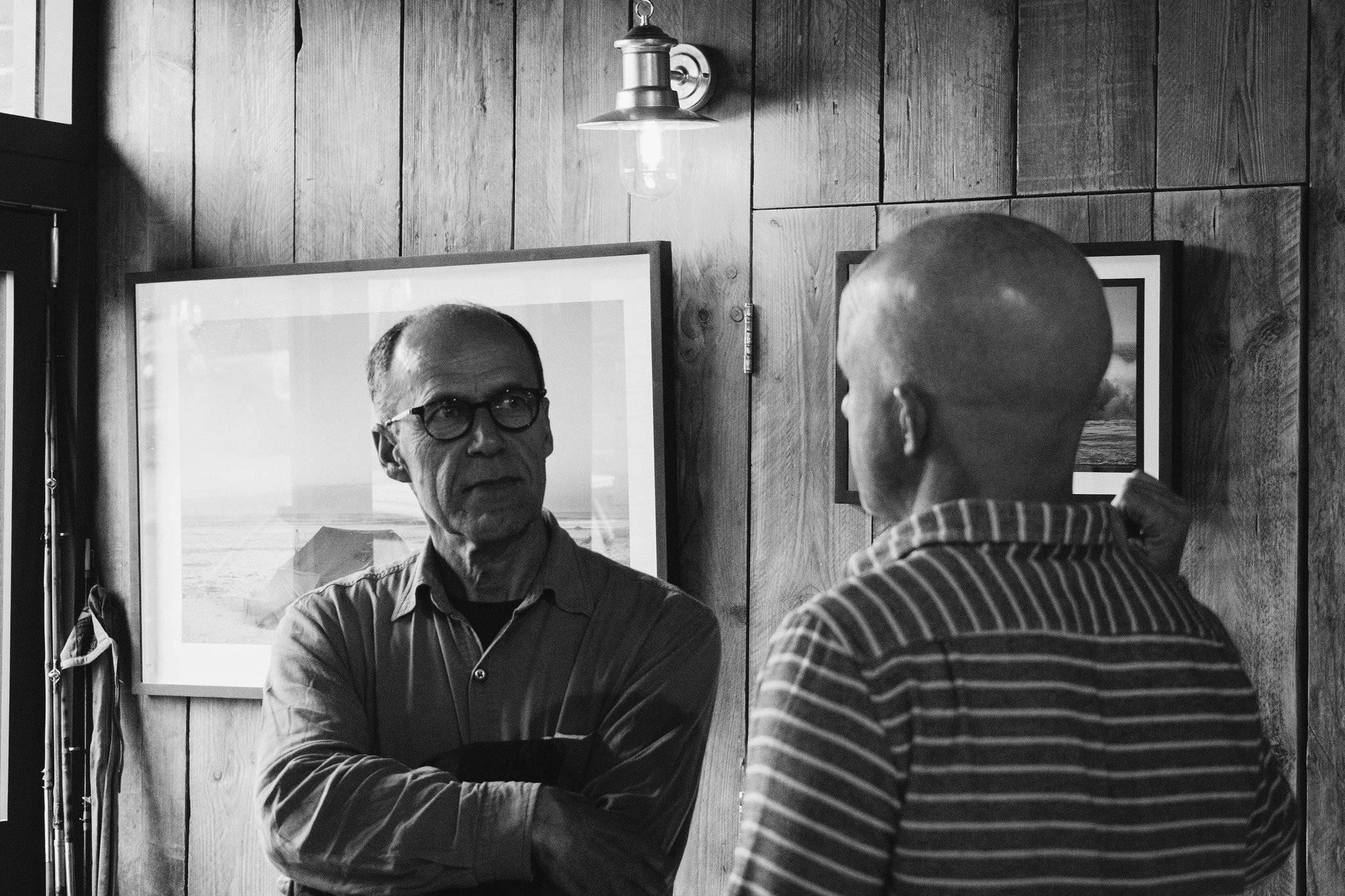 The story begins with the Mariner embarking on a voyage. The boat and crew initially experience good fortune, yet all changes when the Mariner shoots an albatross - central to the poem are the consequences this act unleashes.

Drawing on the themes of sin and redemption, the shooting of the albatross by the Mariner seems to bring terrible storms upon the boat. As punishment, the crew make the Mariner wear the dead albatross around his neck; death then stalks the boat, taking the all the lives of the crew, all apart from the Mariner's. For seven days and seven nights the Mariner must live on the ship amidst the dead crew, staring at their faces. Only when he appreciates the beauty of the creatures of the deep, the same creatures he rebukes, is the curse lifted and the dead souls depart. Possessed by good spirits the ship is steered towards his homeland and on nearing landfall, the rotten ship and crew are engulfed by a whirlpool, and the the Mariner is saved by a hermit and his boy.

Having been saved, the Mariner takes it on himself to wander the earth telling his tale to all he meets; a tale ultimately based around sin, redemption and respect for the natural world.

The inspiration for the poem has been the subject of many a discussion, with some saying it was from James Cook’s second voyage that ventured into the Southern Ocean, others saying it was from other voyages to the Arctic. Nobody can be sure of the exact source, but what appears to be clear is that it was written at a time when life on board ships was full of hardship and there was a real fear of the unknown. It is likely that religious crews would look for natural omens to lift the spirits and alleviate ship’s general malaise; these would reach home shores as a series of elevated tales and encounters, becoming folklore. The mysterious and other worldly sentiment of the poem seems to mirror the often bleak lives of the ship's crew.

It is thought that Coleridge and Wordsworth would walk the cliffs of North Somerset discussing ideas for the poem. The mystery and intrigue that surrounded the themes within the poem is always something that has interested Finisterre founder Tom Kay. When he came across local artist, Harry Brockway who had created a series of woodcut illustrations for the poem and Folio Society, it seemed like a natural fit for an artist series of tees.

Harry studied sculpture at Kingston upon Thames Art School and The Royal Academy Schools in London before training as a stonemason – he later worked at Wells Cathedral. A member of The Society of Wood Engravers since 1984 and an associate member of The Royal Society of Painter Printmakers and Engravers since 2007, we caught up with Harry to learn a little more about his work and how these designs came about. 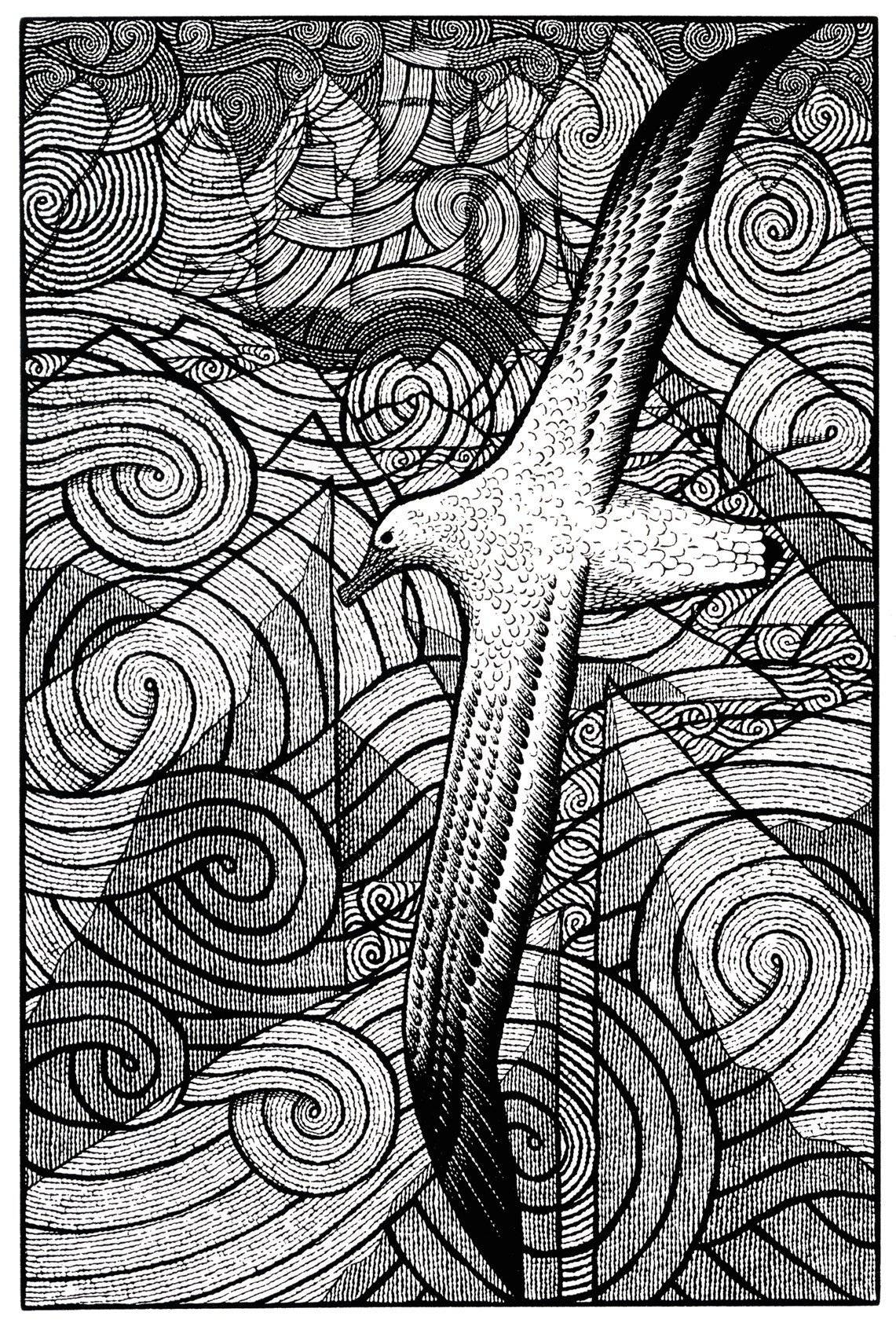 And now the storm-blast came,
And he was tyrannous and strong:
He struck with his o’ertaking wings,
And chased us south along.

With sloping masts and dipping prow,
As who pursued with yell and blow
Still treads the shadow of his foe,
And forward bends his head,
The ship drove fast,loud roared the blast,
And southward aye we fled.

And now there came both mist and snow,
And it grew wondrous cold:
And ice, mast-high, came floating by,
As green as emerald.

And through the drifts the snowy clifts,
Did send a dismal sheen:
Nor shapes of men nor beasts were ken,
The ice was all between.

I read that you trained as a stonemason. How did you get into wood engraving?

I was at art school on a sculpture course when I started wood engraving. Being a small scale activity I was able to work on my wood blocks on my bedsit table in the evenings. Although on a very different scale you use chisels and wood, as I was in my sculpture. I went on to train as a stone mason after art school.

The process of wood engraving must be extremely hard work. Is that alluring - the intricate, manual work of it?

Cutting the marks into the end grain of a woodblock is slow work and mistakes are hard to correct, but the process gives me the same visceral pleasure as cutting into a big piece of timber or a block of stone. 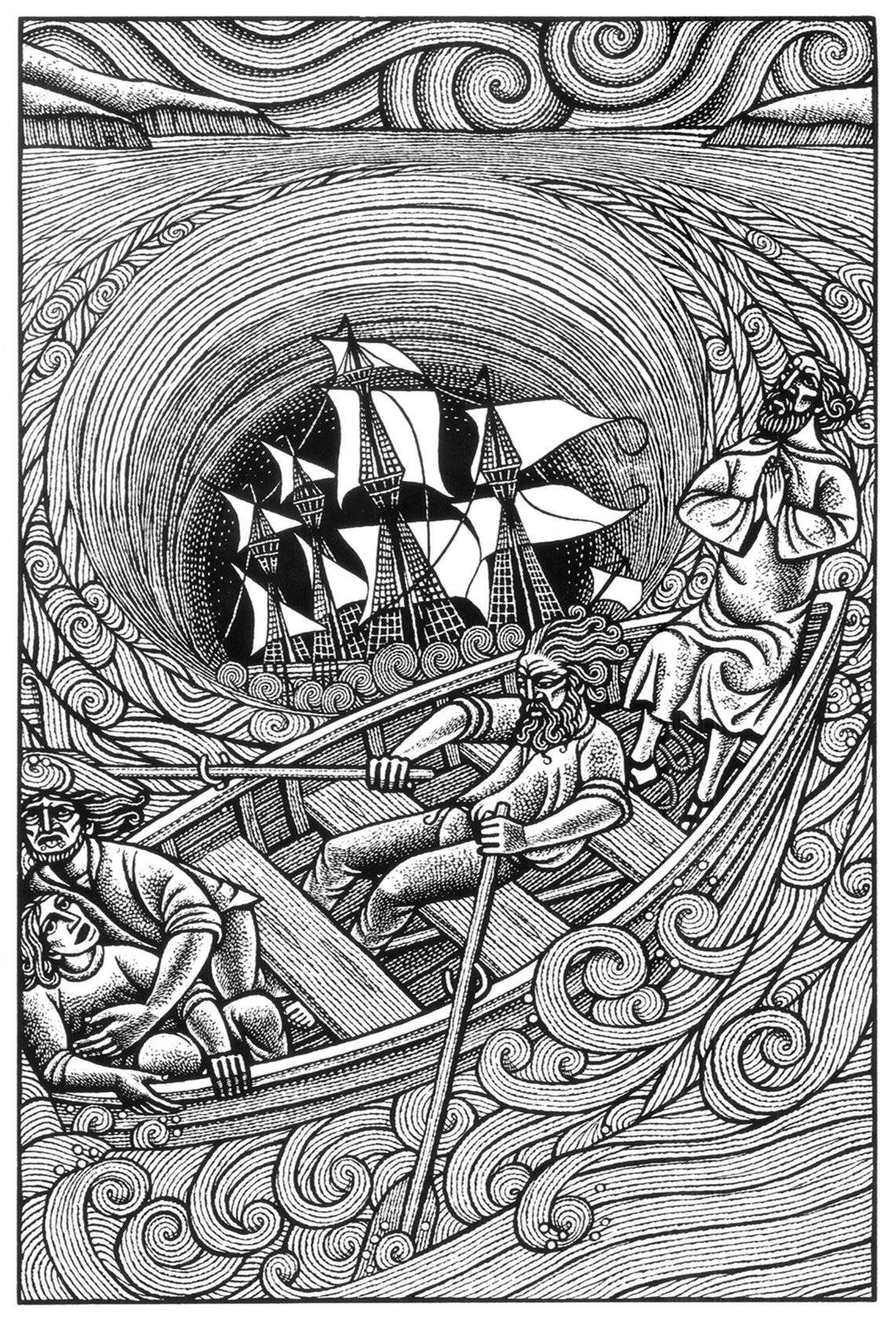 At length did cross an Albatross,
Thorough the fog it came;
As if it had been a Christian soul,
We hailed it in God’s name.

And a good south wind sprung up behind;
The Albatross did follow,
And everyday, for food or play,
Came to the Mariner's hollo!

‘God save thee, ancient Mariner!
From the fiends, that plague thee thus!
Why look’st thou so?’ With my cross-bow
I shot the Albatross.

What was it that drew you to the project of illustrating The Rime of the Ancient Mariner for The Folio Society?

I was invited by The Folio Society to illustrate 'The Rime of the Ancient Mariner'. One of the great poems of the romantic age - it has a deliberately archaic feel which is something that people have seen in my work. I have walked the coastline around Watchet where Coleridge and Wordsworth first discussed the ideas for the poem.

You must have had to study the poem in quite a lot of detail to visually present the narrative - what particularly resonates with you in the poem?

The poem is quite obscure, like many of Coleridge's poems and can be interpreted in different ways. A tale of fall and redemption but also, to the modern reader, it can read like an ecological tale. I used the swirling motif to link this and the other Coleridge poems I illustrated - it works well for the fog and the sky and the sea and hints at Coleridge's troubled and confused state of mind. 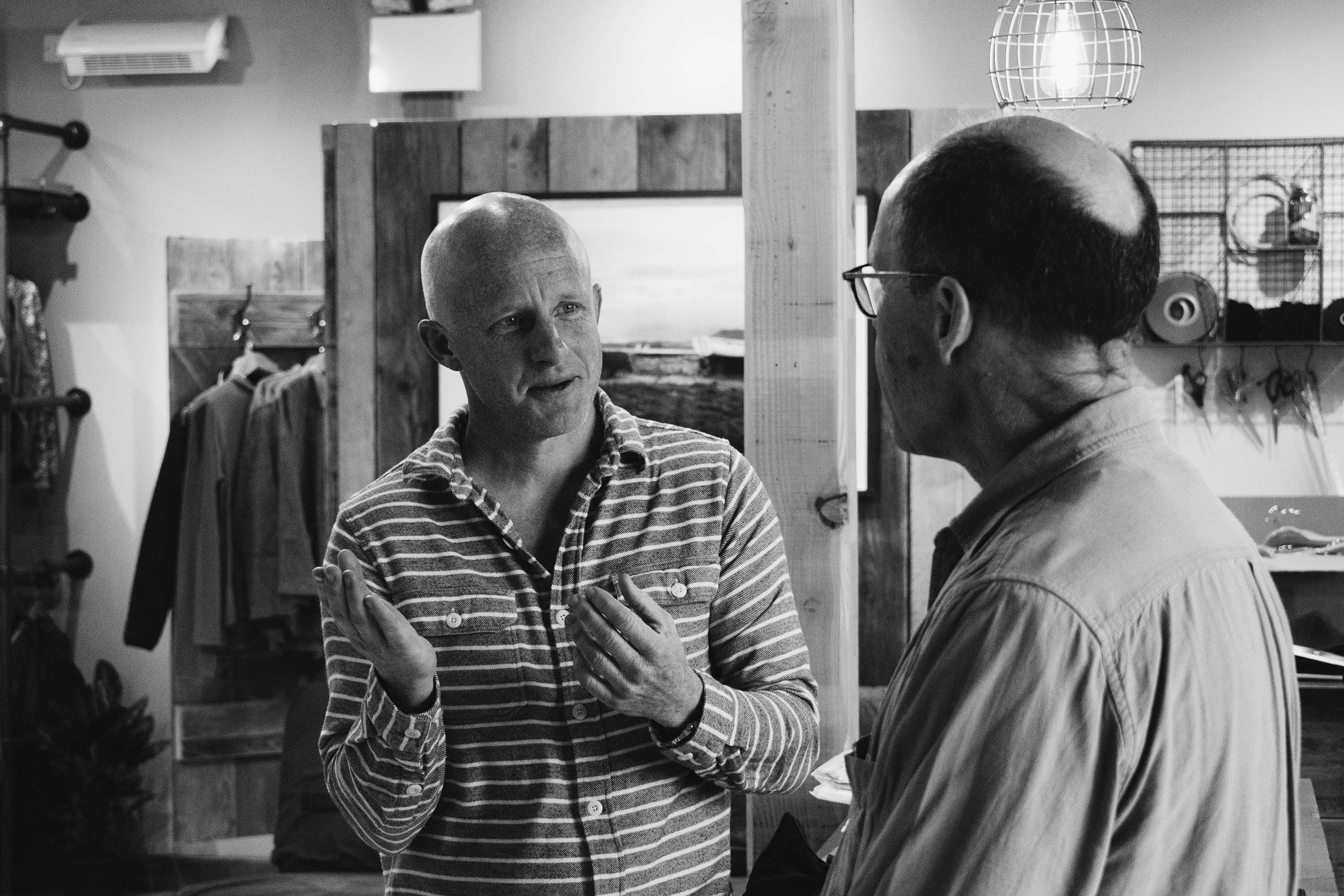 Farewell, farewell! But this I tell to thee, thou wedding-guest!
He prayeth well, who loveth well both man and bird and beast.

He prayeth best, who loveth best all things both great and small;
For the dear God who loveth us, he made and loveth all.