In partnership with Oceanographic Magazine, this year we will be bringing you some of the best stories from the magazine, to bring different perspectives to our community of sea lovers.

In issue 14, beneath the shadows of South Florida’s high-rise coastal condos lies something unexpected: a manta ray nursery. With no formal population studies having been undertaken, one young biologist has taken it upon herself to discover more. 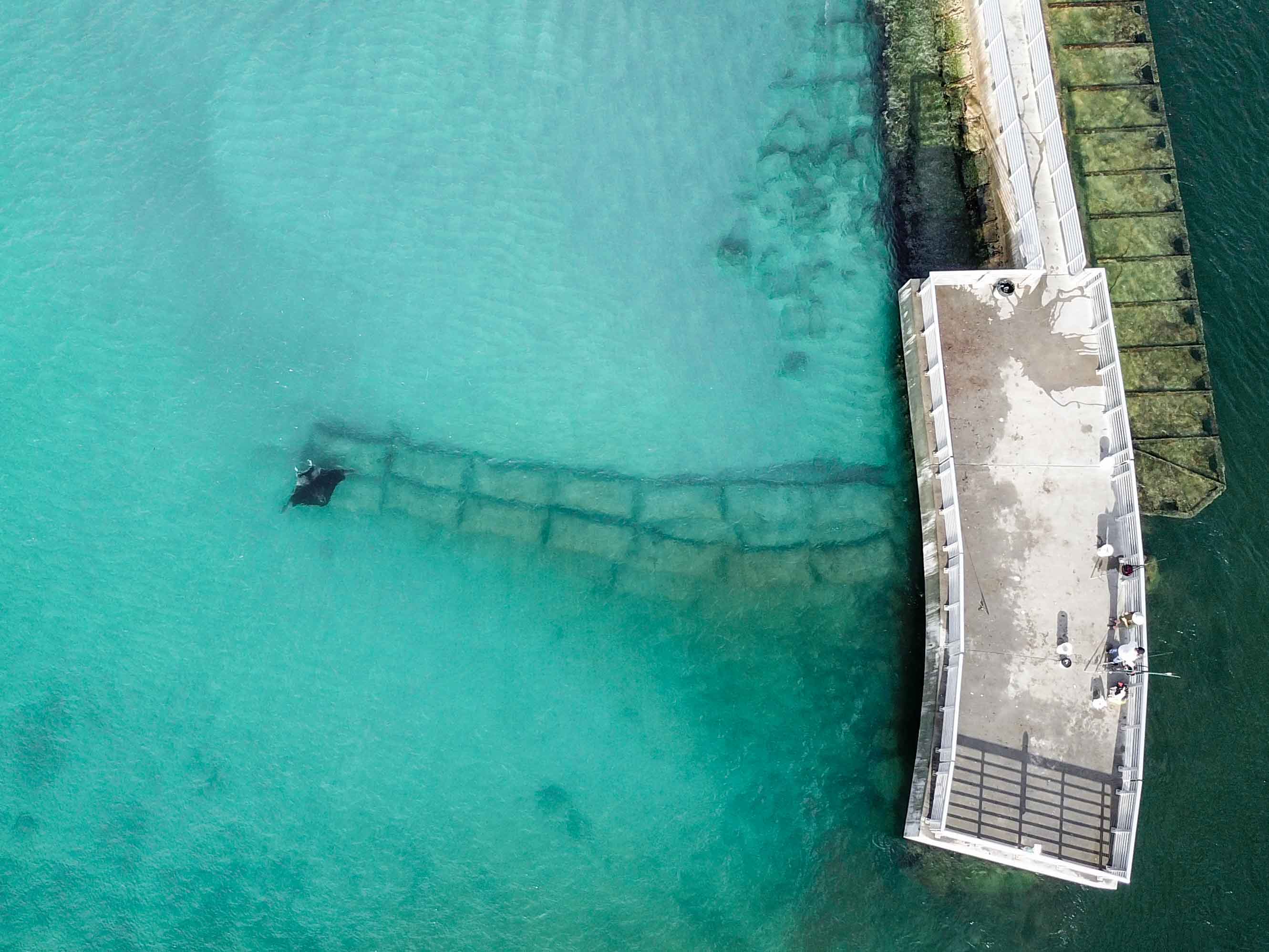 The thin wrack line of South Florida’s beaches divides two distinct worlds. Ashore, the sprawling development of the metro area's seven million inhabitants spills across the state like torrential rain across its level streets. Towering condominiums encroach on coastal dunes, casting shadows by day and disruptive artificial light by night. Seaward, shallow coastal waters are peaceful and calm with sandy bottoms interspersed by limestone and coral reef, the warm Gulf Stream bringing diverse visitors such as whales, sharks and endangered leatherback turtles. Those turtles, along with the manatee, are emblematic of the Sunshine State.

Ask most Floridians to name the species most regularly sighted in or associated with the panhandle’s waterways, it will very likely be one of those two. It almost certainly won't be the manta ray – not in modern, developed Florida at least. Dr Eugenie Clark in her book, The Lady and the Sharks, notes that mantas were semi-abundant in Florida prior to the 1950s, but that their populations appeared to be declining. There also exists a series of photographs of President Theodore Roosevelt posing alongside mantas he had harpooned as trophies in the early 20th century. Today, sightings are irregular – as a lifelong Florida resident and waterman, I had only ever seen one manta ray in my life. Until I met Jessica Pate. 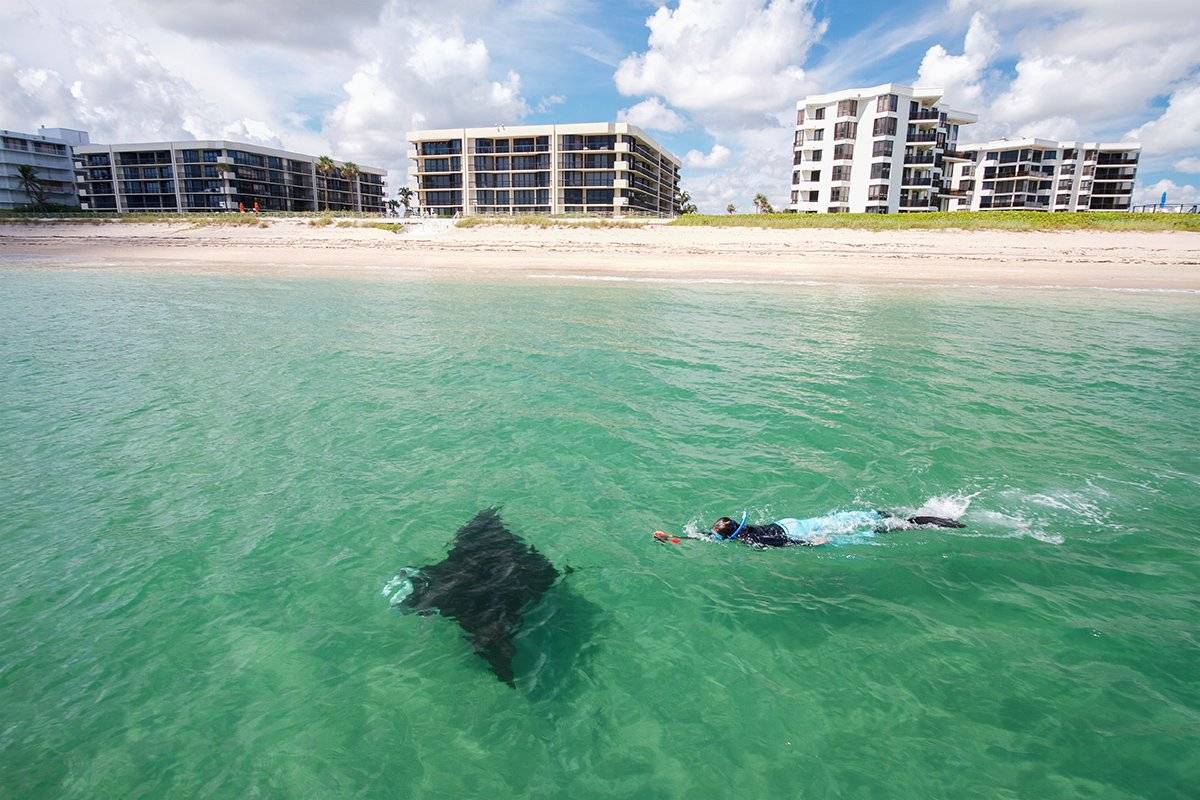 Pate, a marine biologist, was working for a sea turtle nesting programme in South Florida when she started noticing dark shadows in the shallow waters close to the shores on which she was working. Until then – even as an active diver with an understanding of the local reefs – she was unaware mantas visited South Florida’s coastal waters. Curious, she asked questions within the local marine science community and was surprised to discover that while mantas did frequent the area, no formal studies had been undertaken on the species.

"I convinced a friend with a boat to take me out to look for mantas,” says Pate. “We found one pretty quickly. She was close enough that I could have reached out to stroke her.” While in the water together, the manta ray regularly turned over (mantas have better vision below their bodies and this behaviour was likely an attempt to better see Pate) and swam in slow circles. There seemed to be a mutual curiosity. It was a moment of reciprocity that captivated Pate. She needed to learn more.

“Upon sighting a manta, one of the research team would freedive with the ray and photograph the individual’s dorsal and ventral surfaces.”

In 2016, she began her study, persuading me with her conviction and passion to help. We hired a rental boat and took days off work to search for manta rays. That first season’s objective was simple: prove that manta rays could be reliably and regularly located. With an awareness that the local dive community rarely saw mantas on deeper reefs, we focused on surveying shallow coastal waters less than five metres deep, off the beaches where Pate had first observed the species. In the first hour of our first survey we encountered two manta rays. We were jubilant. Hopes of a serious, meaningful study skyrocketed. Although sightings slowed dramatically thereafter – including a month-long stretch with no encounters – we continued surveying every week. By the end of that summer, we had encountered 11 individuals.

It was a modest start, but significant. Pate doubled her efforts and founded The Florida Manta Project (FMP) with the Marine Megafauna Foundation (MMF). She recruited a team of young female volunteers – a point of pride to Pate – to conduct field surveys three times a week throughout the summer. These boat surveys involved scanning the surface for dark shapes and using a drone to improve efficacy. Upon sighting a manta, one of the research team would freedive with the ray and photograph the individual’s dorsal and ventral surfaces. Back on land, those images would be analysed for 'belly' spot arrangements that, much like a human’s fingerprint, could be used to identify an individual ray.

“One criterion for a habitat to be considered a nursery is the repeated usage of that habitat by juveniles. FMP’s data shows that 42% of all recorded rays have been sighted in the area more than once.”

A pattern quickly emerged from the data. “I was surprised to learn that nearly all the mantas were juveniles,” says Pate, “and that we were seeing the same individuals over and over again.” As of July 2020, the FMP team has identified 65 individual manta rays. A manta's age is determined by the size of reproductive claspers in males and the relative body size of females. Males typically reach maturity at about three metres, and females at four metres. In both instances maturity is estimated to take 8-10 years, with total lifespans conservatively put at 40 years. Most of the FMP's dataset falls between two and three metres of disc width, within the juvenile size range. Some individuals are small enough to be considered young of the year.

One criterion for a habitat to be considered a nursery is the repeated usage of that habitat by juveniles. FMP’s data shows that 42% of all recorded rays have been sighted in the area more than once. One juvenile, nicknamed Gillie, has been seen 23 times in three years. As well as offering compelling evidence that South Florida’s coastline is a manta ray nursery, these re-sightings also give the FMP team insights into individual behaviour patterns. Most mantas show no interest in the researchers, but others, including one of Pate’s favourites, Stevie Nicks, seem curious about people. Each time Stevie has been encountered, she has engaged in “upside down” swimming behaviour similar to that of Pate’s first manta. On one occasion, FMP volunteers spent an hour in the water with Stevie cutting away fishing line from her body while she swam slow, patient circles below. While the incident perhaps highlights a degree of comfort that some mantas like Stevie Nicks feel in human company, it more importantly reveals the great perils all mantas face inhabiting waters bordered by sprawling human populations – mantas have been sighted off Miami’s party beaches, feeding near Jimmy Buffet’s Margaritaville in Fort Lauderdale, and swimming past President Trump’s Mar-a-Lago resort in Palm Beach. 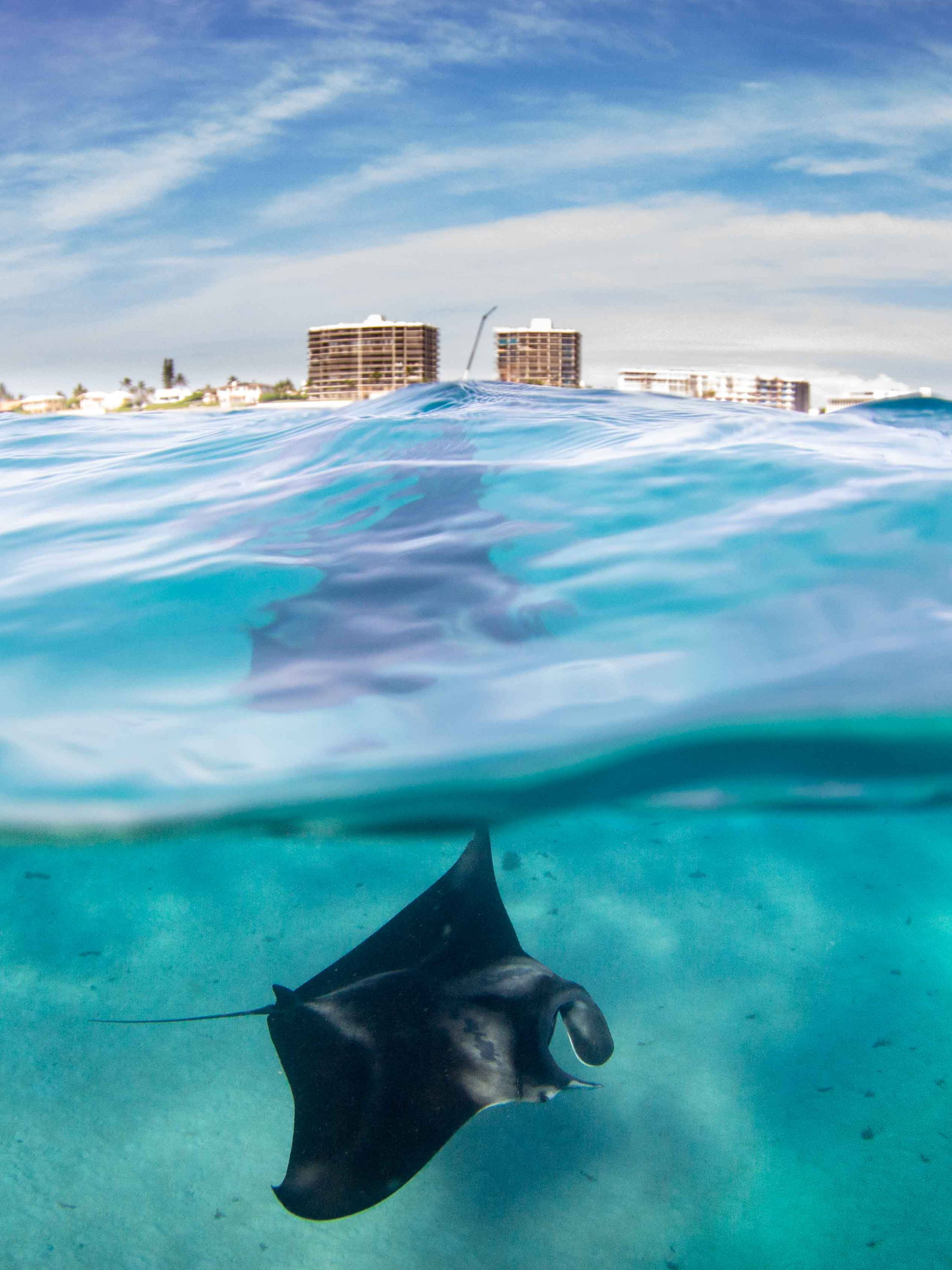 According to FMP data, 27% of the local manta ray population has been observed entangled in fishing line. Fishing line can cause injury by cutting into the ray’s body and, in extreme cases, prevent normal swimming, which could lead to death. Boat strikes, distinguished by the wound and scar patterns that propellers create, are another risk. The FMP team has documented 10 incidents of such injury – a statistic that doesn’t come as a huge surprise given the size of Florida’s boating community and the use of horse power as a social metric.

One juvenile male manta, nicknamed Kevin, instantly recognisable by a truncated left pectoral fin, has been particularly unfortunate, though that misfortune has given the FMP team unprecedented insight into a manta’s ability to heal. Kevin has suffered multiple entanglements as well as two deep propeller injuries. The wounds proved survivable, both completely closing within two to four weeks. While the severity of each wound will naturally vary, re-sightings of injured manta rays will, over time, allow Pate and her team to build an understanding of boat strike recovery time amongst the population.

To better understand and mitigate the risks of future entanglements and boat strikes FMP has recently partnered with another local female-led organisation, Field School. The project has seen hundreds of fishermen interviewed in order to better understand how mantas become entangled in fishing line. The knowledge and attitudes of the participating fishermen towards manta conservation was also assessed. “Humans are central to both the causing and solving of all environmental problems,” says Dr Julia Wester, Director of Program Development for the Field School. “If you want to protect environmental resources, you will only be successful if you engage directly with the people who interact with and use those resources.” The fishermen interviews revealed that most instances of line entanglement are unintentional, though some do use mantas to target gamefish known to associate with rays. Most interviewees were aware of manta rays and viewed conservation efforts positively. The team is now on the second phase of the study, producing outreach materials that encourage fishermen to reel in lines whenever rays are sighted and recommendations that anglers avoid casting directly in front of any rays while fishing for associated gamefish.

“There have even been reports of mantas feeding multiple kilometres inshore, in murky waterways flanked by high rise apartment buildings.”

The big question is how far the nursery extends. FMP’s study area is just a small fraction of similar contiguous habitat. Through social media and MMF’s online Manta Matcher platform, Pate has received reports of mantas both to the north and south of her study area. To better understand where the boundaries of this nursery habitat might lie, Pate has begun a collaborative satellite tagging study with a team from the National Oceanic and Atmospheric Administration (NOAA). Mantas were added to the United States Endangered Species Act in 2018 due to global declines. Government scientists, however, lack sufficient data to effectively promote conservation and recovery. “This study will provide a better understanding of ray movements and habitat use, including environmental drivers of movement, and exposure to threats in specific areas,” says South East Region Giant Manta Ray Coordinator for NOAA Fisheries, Calusa Horn. Preliminary results show that juvenile mantas can travel hundreds of nautical miles and far offshore between visits to specific nearshore locations. Returns to South Florida sites reinforce the notion that it is an important habitat, but the long distance travel adds complexity to developing comprehensive conservation strategies around a designated nursery area. 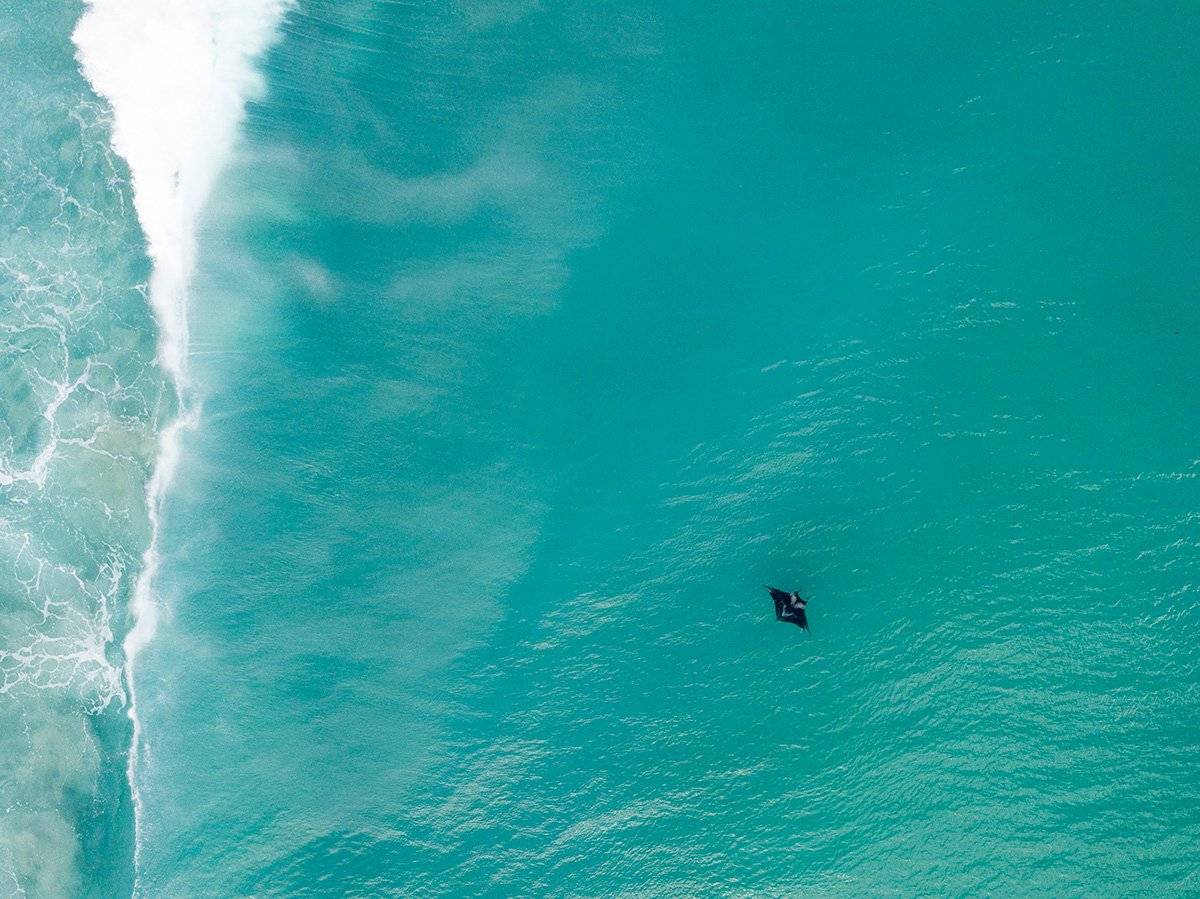 “There are few known manta ray nursery grounds in the world,” says Pate. “This one is unique in existing along a developed coastline and not on a remote island.” There have even been reports of mantas feeding multiple kilometres inshore, in murky waterways flanked by high rise apartment buildings. “This study will require years to fully understand how manta rays use this nursery habitat, when and where they go, and when they transition to adulthood.” Plans are also in place to expand the study area into Central Florida, where there is a seasonal aggregation of manta rays comprised mostly of adults. Pate hopes to ascertain if this more northerly population is related to the young rays in South Florida. Connect the populations, connect the conservation efforts.

“My ultimate goal,” says Pate, “is that someday the Florida manta ray will be as iconic and recognisable as the sea turtle and manatee.” Perhaps it is time for rays to come out of the shadows.