The Broadcast / Agent Of Change

Leaders are not born, they are made. Growing up in a South African township, Finisterre Ambassador Apish Tshetsha's deep connection to his local community, and the trust this gained, was one of the central pillars that enabled him to co-found Waves for Change with Englishman, Tim Conibear.

We previously spoke to Tim about how the pioneering surf therapy programme got started, so this time it was Apish's turn to recount the tale. Now a prominent agent of change within his community, he talks about the importance of guidance, working to overcome cultural barriers, and the future of surfing in South Africa. 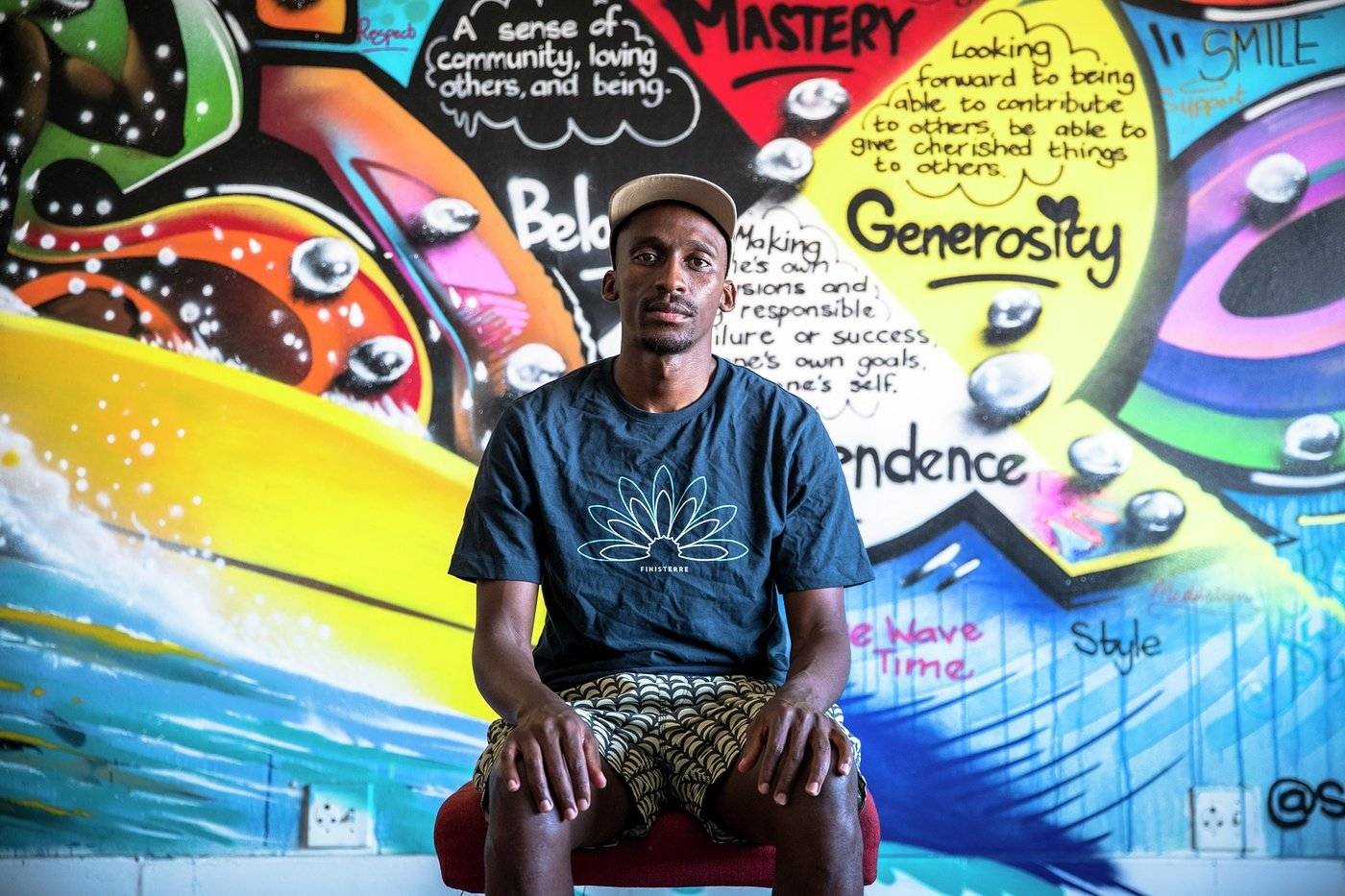 I’m originally from Tsolo in the Eastern Cape, which is just a few kilometres from Mthatha, but I grew up in Cape Town. I only discovered the ocean when I came to Cape Town and started to spend time in Fish Hoek. We would sometimes walk from Masiphumelele to Fish Hoek just to be at the beach.

I got into surfing after meeting Tim Conibear in 2007. I was 17 years old, living in Masi, playing soccer and also teaching young boys how to play soccer. Tim invited me for a surf lesson at Muizenberg and I really struggled, I was just falling off. But I knew then that I wanted to become a surfer.

After that, Tim would come to Masi to pick me up for sessions. He saw a bunch of kids sitting at the park one day, smoking dagga and sniffing glue, and was really worried. I said we should take them for a surf lesson because they have nothing good to do. They told us that they had been expelled from school and there was no one at home looking after them. These young boys, nine and ten years old, came from broken backgrounds and just didn’t have anyone guiding them. We took them under our care and started a surf club. We would take them once a week and it would usually be around eight to ten boys. We called it Isiqalo, which means “The Beginning”.

Growing up in a township, especially Masi, is not an altogether bad environment. People in Masi are happy. They are a community and there is unity. If something goes wrong, they all respond. If something goes right, they are happy together. There is always a bit of negative and a bit of positive. It’s just that as a young person, you need guidance from an adult; you need to be mentally strong. If you don’t have that, you end up too easily doing negative things. 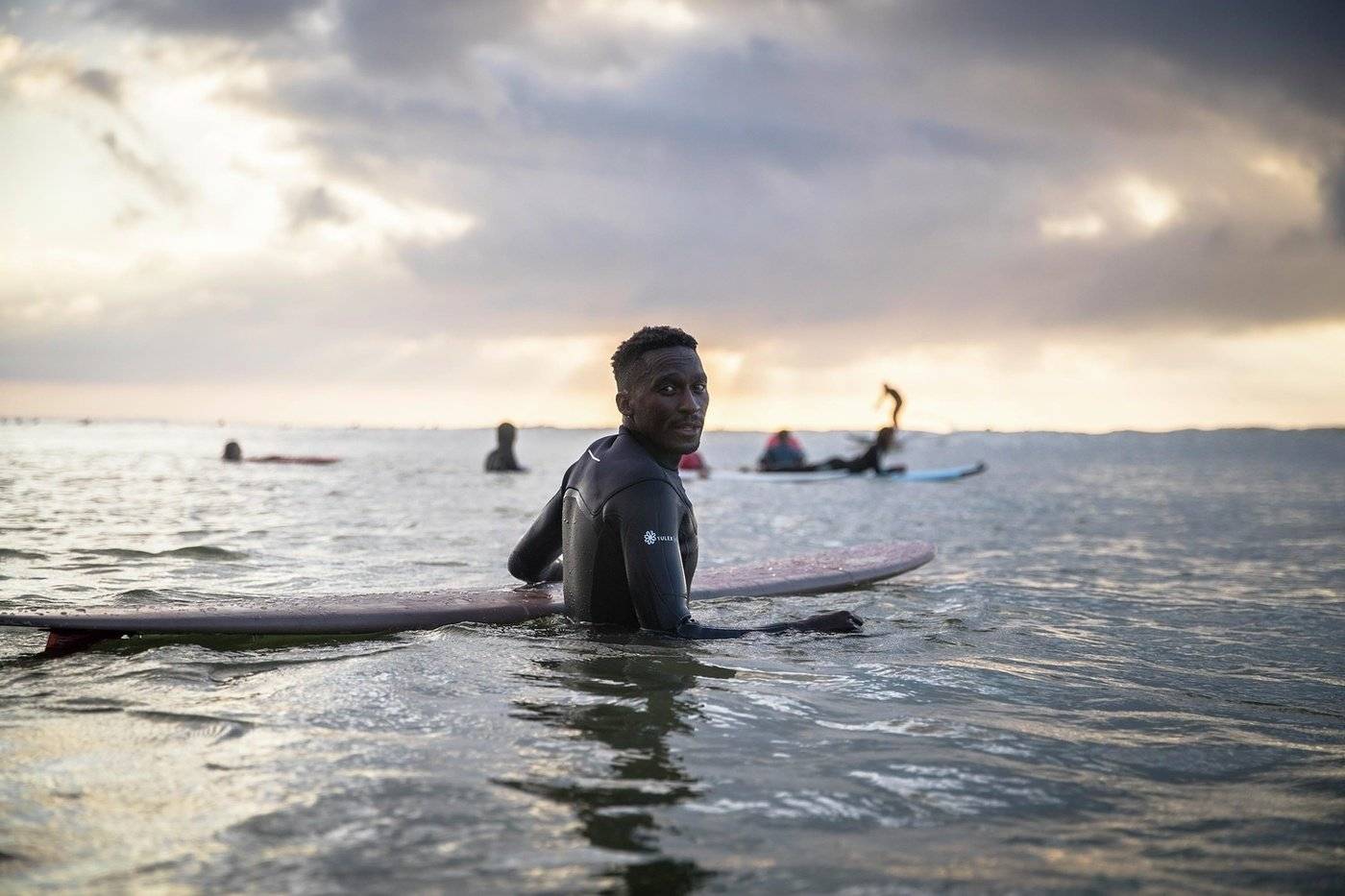 Shortly after we started working with kids from Masi, I got my driver’s license and we got a green van. Tim didn’t have a long-stay visa. He would come for three months and then have to go back home to the UK. I become responsible for the programme during those periods and would manage things when Tim was away. I would look after the kids, transport them to the beach and back, and make sure that they had something to say.

After Grade 12 I wanted to study and did some short courses. I would sometimes be away for a few days or a week, and then the kids wouldn’t attend the programme. Tim couldn’t understand why the kids weren’t coming anymore. We discovered that if I wasn’t there, they didn’t really have that trust with Tim. That connection. They seemed to have this sense that as an outsider, Tim might not be there forever. But with me, they knew I would be there. There was that reliability and trust. That happens a lot to the kids when they are young; they don't have consistency in their lives and they lose that sense of trust through bad situations.

“It’s about identifying the right people, not just anyone. Leaders who have a passion for uplifting others and a passion for change. Young leaders who the kids can identify with, who are from their own communities.”

Hearing their stories, I could relate. I could understand their struggles because I was in the same environment as them. That’s what motivated Tim and I to eventually start Waves for Change; to have an organisation dedicated to surf therapy. Around 2011, we formalised the programme and started working with a school. It started to really make an impact on those kids. The teachers saw that it was making a difference and we got approached by the high school as well, and we started working with more schools after that. We got social workers involved and a psychologist and they created a curriculum for the programme. We now run five different beach centres along the South African coast, and at these centres we employ 50 youth mentors, all aged between 18 and 24, mostly metric graduates who can’t find work. We’ve got 1800 children being referred to Waves For Change programmes each year at the moment, and each child gets a 12-month programme. 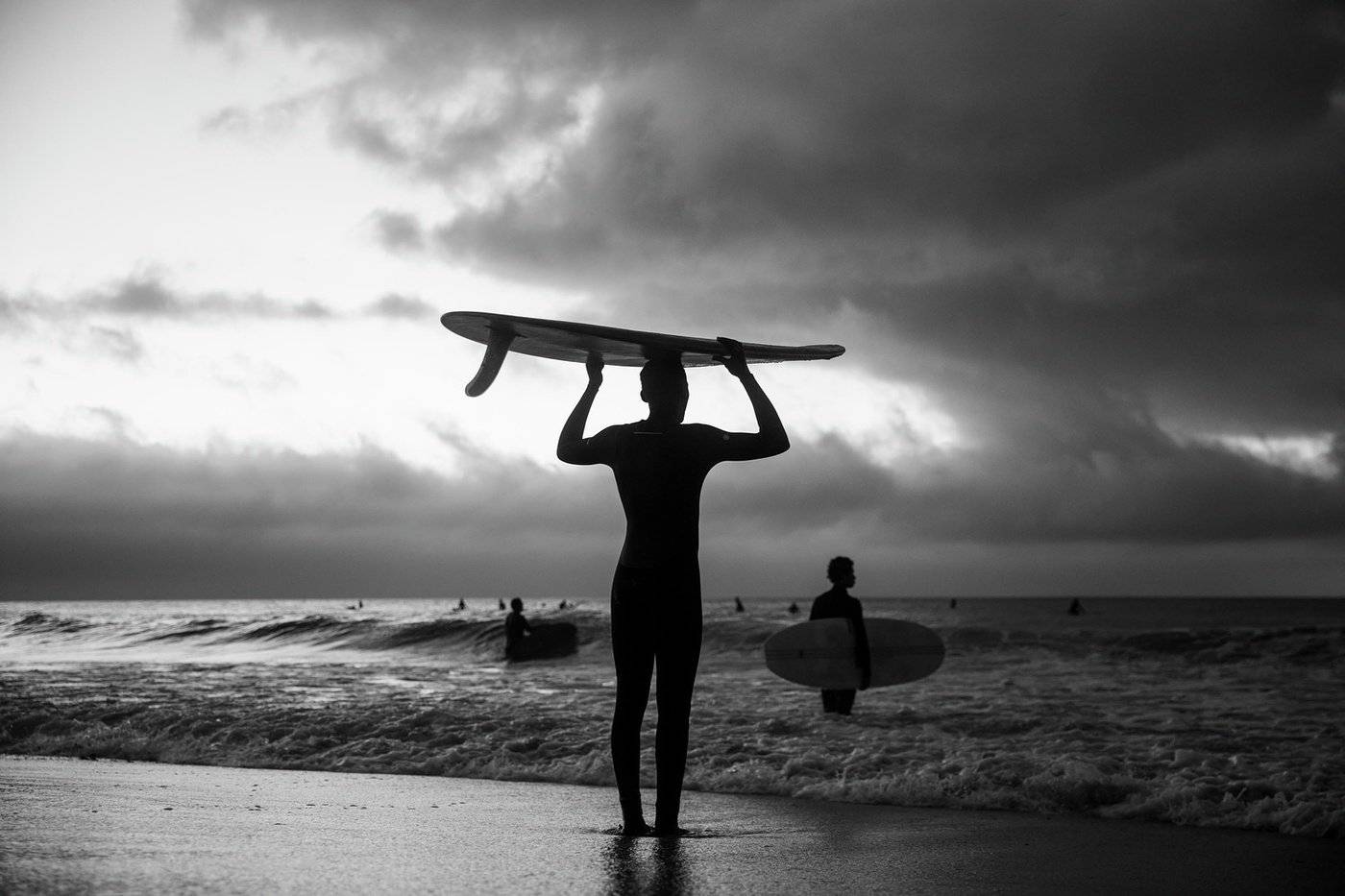 A key pillar that Waves For Change is built on is getting local youth to lead the programmes. It’s about identifying the right people, not just anyone. Leaders who have a passion for uplifting others and a passion for change. Young leaders who the kids can identify with, who are from their own communities.

The future of surfing is exciting. You can see that it is becoming far more inclusive. When I started, it was mostly just men. Now there are a lot of woman. I’m from a Xhosa culture, and from our perspective surfing has always been seen as a white people’s sport, but now you have diversity within the surf community… it gives me a great sense of optimism. Now that we are bringing all the communities together, differences in gender, race and age don’t matter.

Going forward, I think that surfing is going to help drive a sense of unity in our country. South Africa has a bad history, but if there are more stories like Siya Kolisi - a black man leading a team to victory in what was predominantly seen as a white man’s sport (Rugby World Cup) - it brings people together.

There are still cultural barriers that stop us going into the ocean. Some of the kids in the programme can’t go to the beach because of their clan names, or because they aren’t associated or related to the ocean. But that’s also changing. I’ve seen some of them really pushing through those barriers with guidance from their parents and help from us. 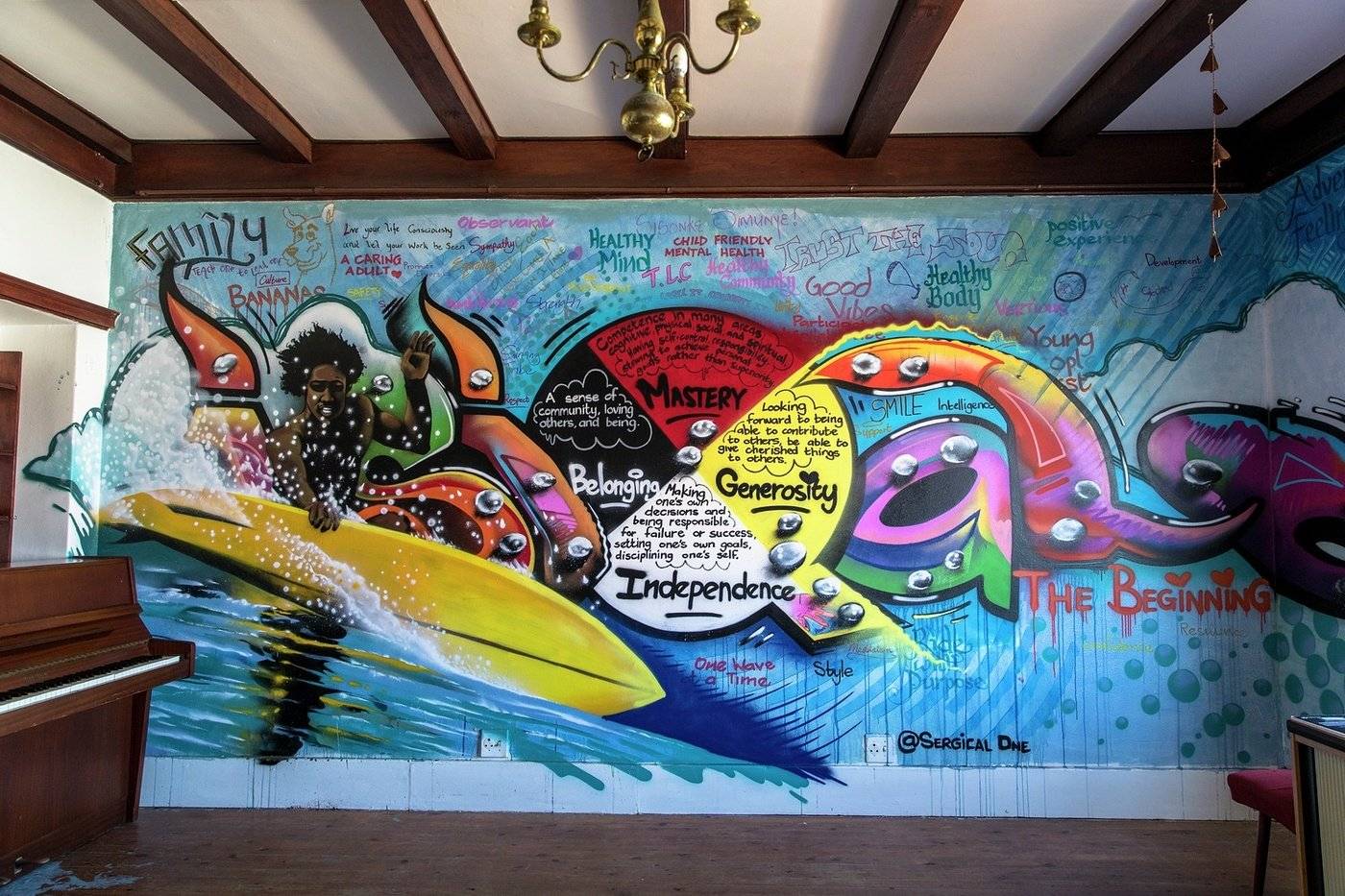 I remember a few years ago when Mikey (February) came into Kayelitsha and then went for a surf at Monwabisi, down the road. Everyone from the community heard what was happening and walked down to watch because there was this black guy doing this amazing thing which they had never seen before. He was doing air-reverses and surfing with such style. The kids, they loved that. Seeing a guy like Mikey who they can relate to, it brings a lot of hope, and he is doing the same thing that Siya Kolisi did with rugby. Taking the sport to everyone. He does it in a very humble way. You can go to Liberia, you can go to East London… The one person these kids truly relate to in surfing is Mikey Feb. He’s such a big influence in the black community.

I’m busy studying sociology and community development, which I would also like to implement into our programmes and into my personal life, and see if I can make a bigger difference. I would really like to see whole families getting into surfing. That is my plan. Even in my own family, they didn’t understand surfing at all. I was the first generation in my family to discover and try it. Now they can see me doing it. They understand how much I love it and see how it can help others.