The Broadcast / End of the Lane

End of the Lane

Writer and frequent Broadcast contributor Pete Geall explores how increased connectivity and limitless “sharing” left a small Cornish bay not just blown out, but dangerous during a summer heatwave.

Previously featured in Surfers Journal (30.5) his essay “End of the Lane” challenges the reader to question their relationships and digital responsibilities with outdoor places they hold close. 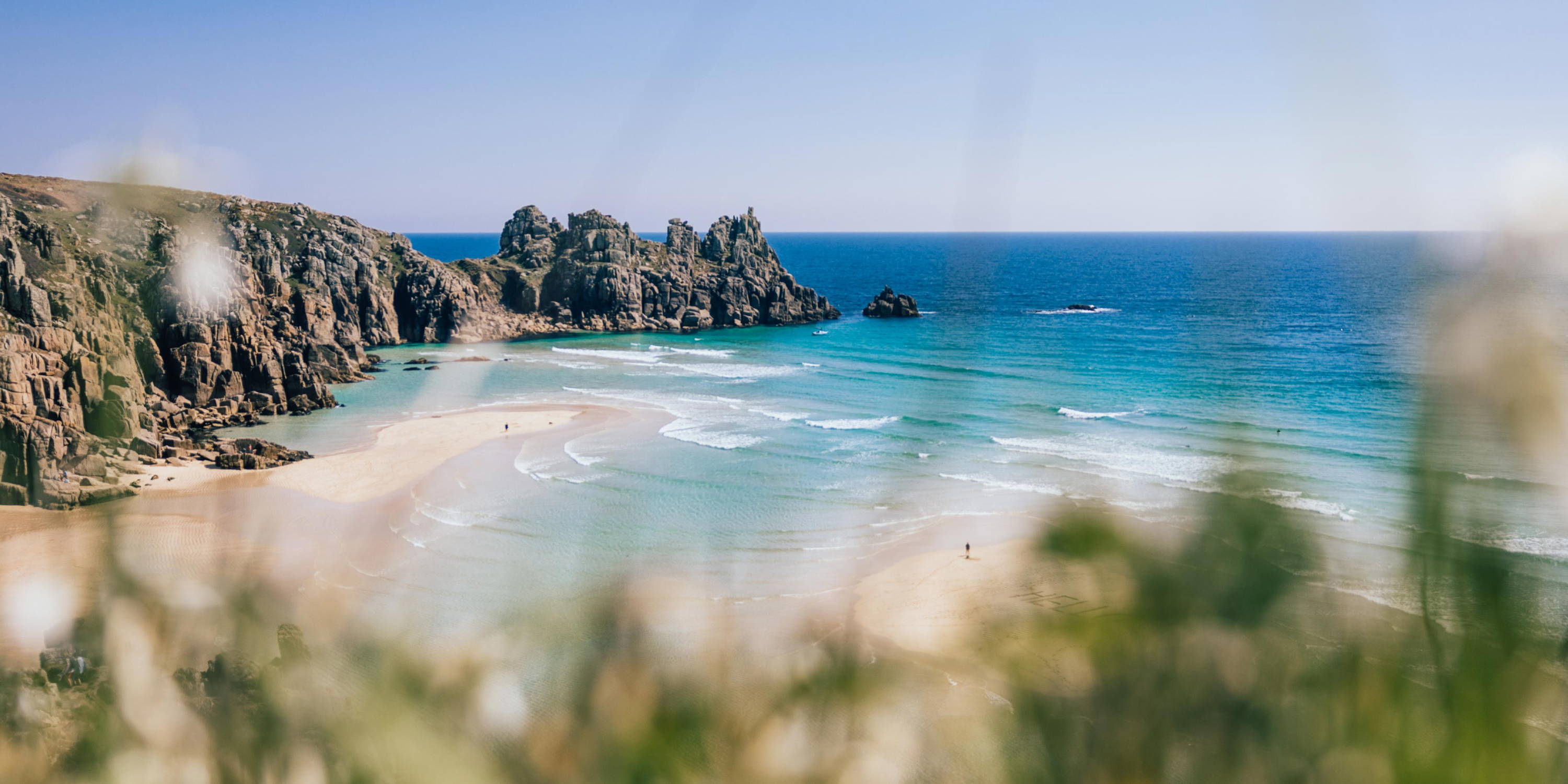 It’s midsummer in Cornwall, as far west as you can go in the United Kingdom before land trips into the Atlantic. The county is sweltering under an extended heatwave that has turned this typically mild, maritime-influenced peninsula into an English version of the Spanish beach resort Costa del Sol. Ancient lost villages rise from dried reservoirs. Rolling green pastures are parched russet-gold. Sunburnt foreheads and cider-drunk wasps wreak havoc in beer gardens all across the countryside.

The county’s tourism board, Visit Cornwall, takes the unprecedented step of instructing tourists to stay away from certain areas that have been struggling to cope with the influx of visitors. Footfall is up 20 percent on the 4.5 million that already visit the county each year. Weather is clearly a key factor, but many place the blame squarely on the shoulders of social media.

“Tis the internet,” the locals proclaim with conviction.

Pedn Vounder, a small bay popular with nudists that’s situated not far from my home, has become ground zero for overcrowding. Beautiful stills and video capturing the picture-postcard cove have been resized into square vignettes and carried by the irresistible wind of Instagram to all four corners of the country. Inviting waters that pool provocatively over shallow tidal inlets, and thick grains of fluffy white sand flanked by dramatic columns of granite, stir the imaginations of those stuck inland, elevating the bay into the zeitgeist of the heatwave. 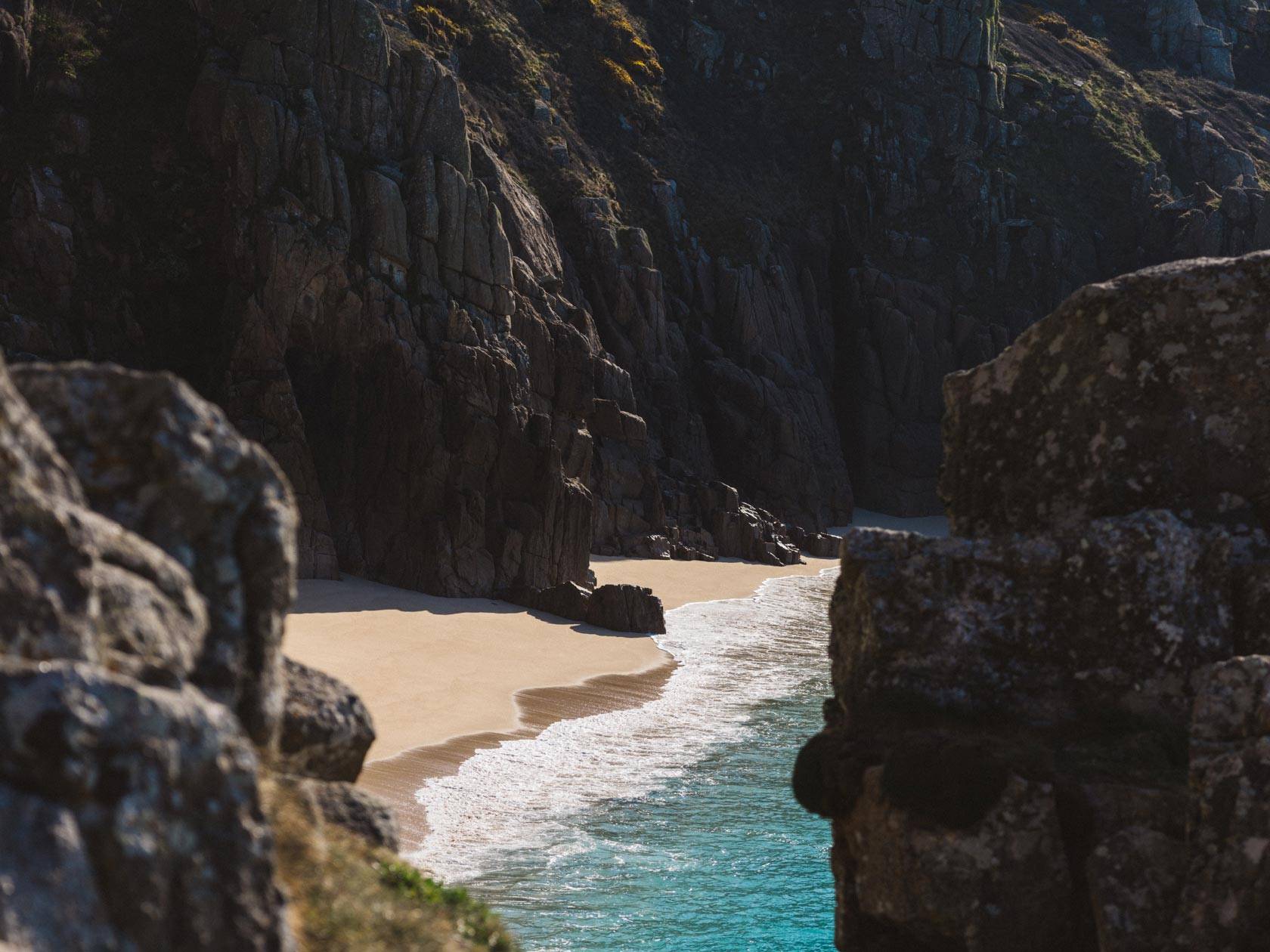 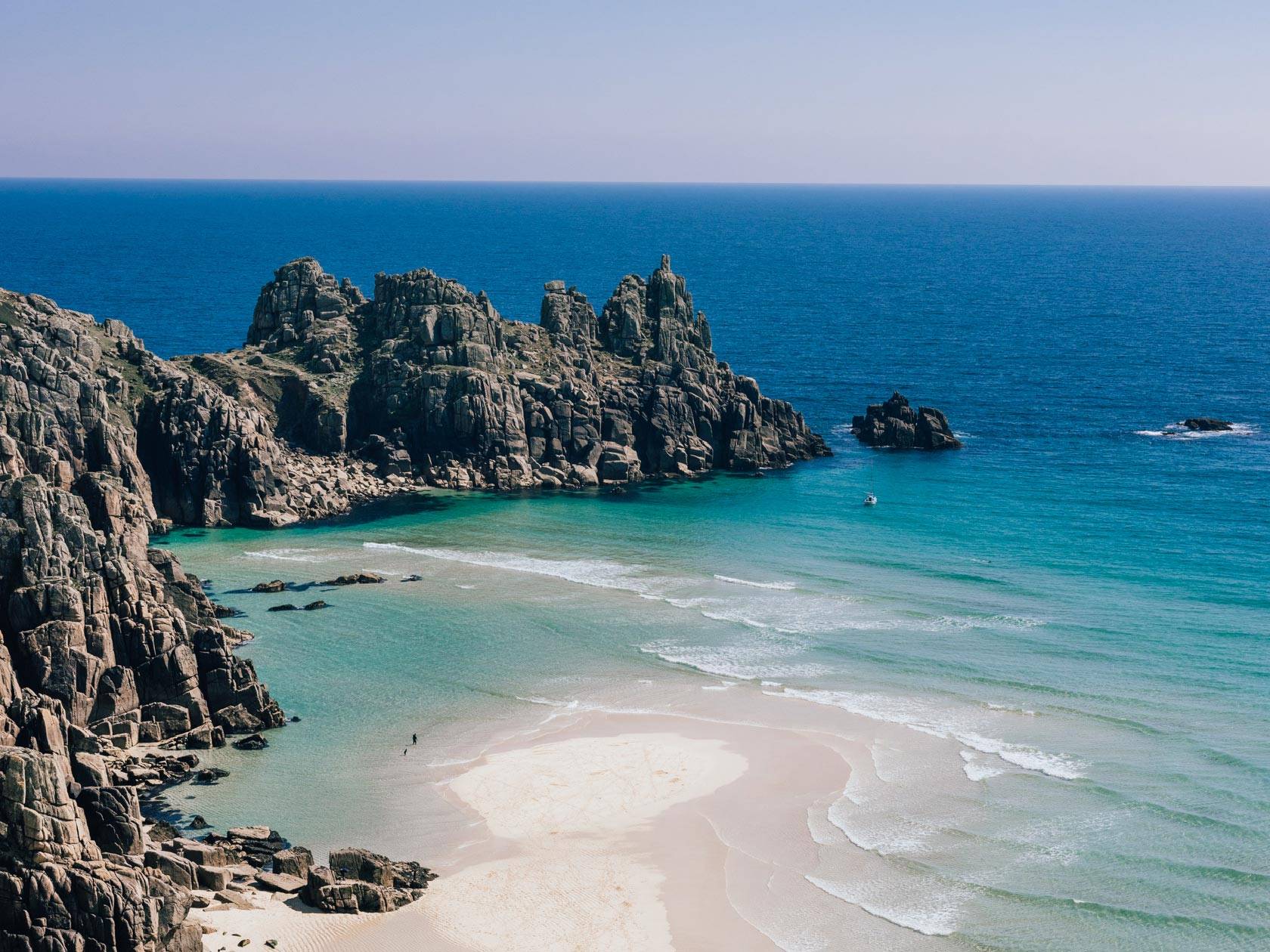 “We can’t get the patrol truck into the car park.”

The lifeguards at Porthcurno, the main access point at the west end of the bay, protest about the volume of beach visitors and associated dangers at our weekly swim session. No sooner do we arrive to perform our perfunctory pool laps than I see them pack up and leave in the lifeguard truck. The winding drive is unnavigable after nine o’clock in the morning. Roads jam, police are called to redirect traffic, and buses wedge between blossoming hedgerows.

A 7-metre tidal range allows for the multiple coves to link up on low tides. In reverse, the beaches are quickly inundated on incoming tides, and the rugged cliffs cause major access and egress issues in emergency situations. Due to the crowding, lifeguards have trouble keeping up with a mixed bag of injuries, tidal cutoffs, and other types of rescues. When called to assist in major incidents, overstretched external agencies become delayed or are blocked off completely. The Coastguard helicopter even struggles to find a place to land.

Amidst the madness, the nudists still roam. Having long chosen this bay for its picturesque qualities and difficult access, they are suddenly surrounded by those less naked than themselves. Ownership of their long-held secret has been sold out by the social posts of those who visit once and pass the dream to all.

I can’t help but equate the overcrowding with digital issues that have changed our relationship with surf breaks at home and abroad. The once-reticent surfsphere is now filled with people willingly disclosing the location of sandbars and secrets for the instant gratification of social posting.

As a result, following the movements and posts of oversharing surfers has become one of the primary sources of real-time intel in the arsenal of amateur surf forecasters across the world. Many have bemoaned the overshare as a fundamental erosion of the unwritten and borderless surf etiquette that so many of us follow, a digital force picking at the seams of our shared spaces and identity. 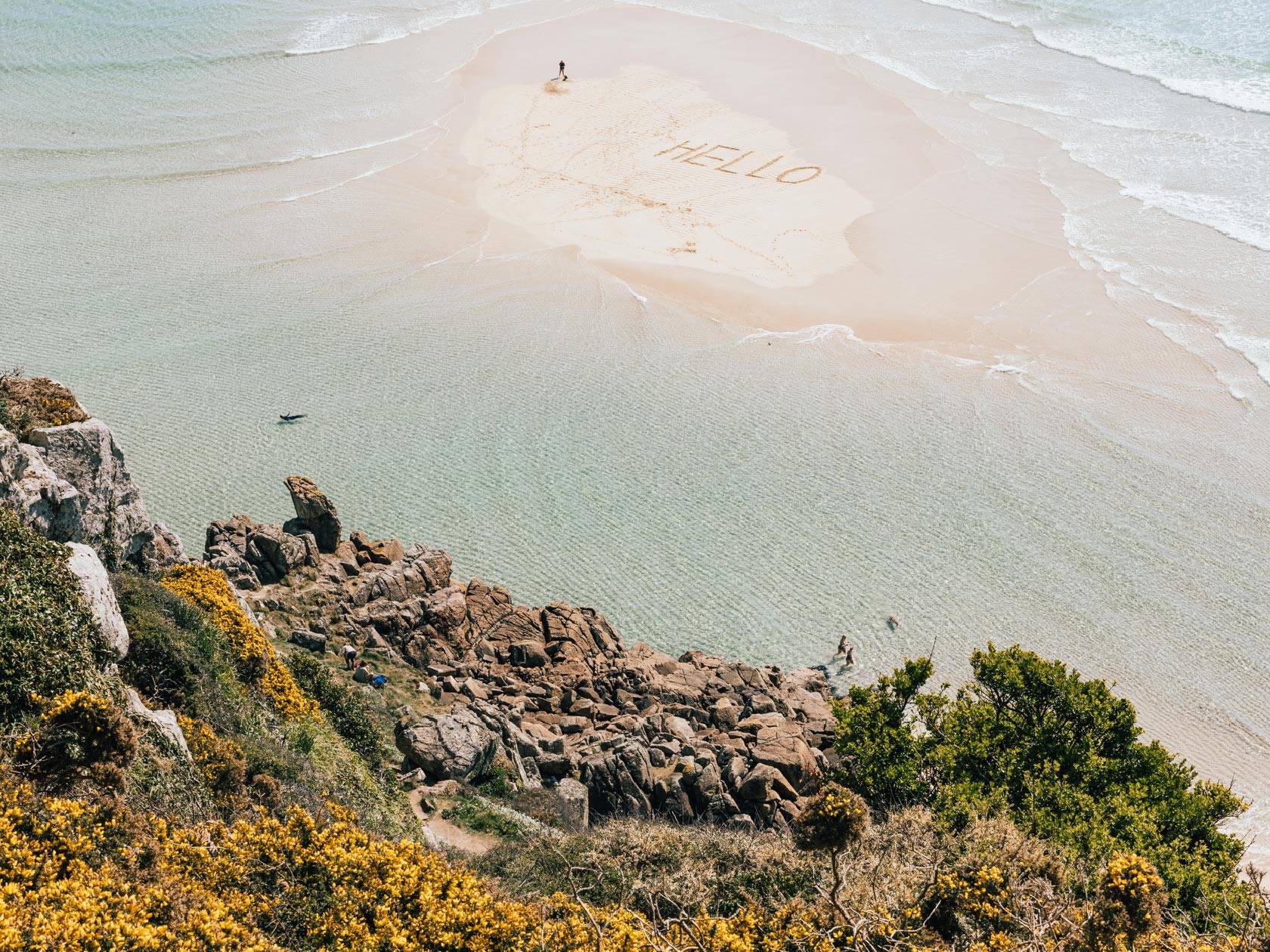 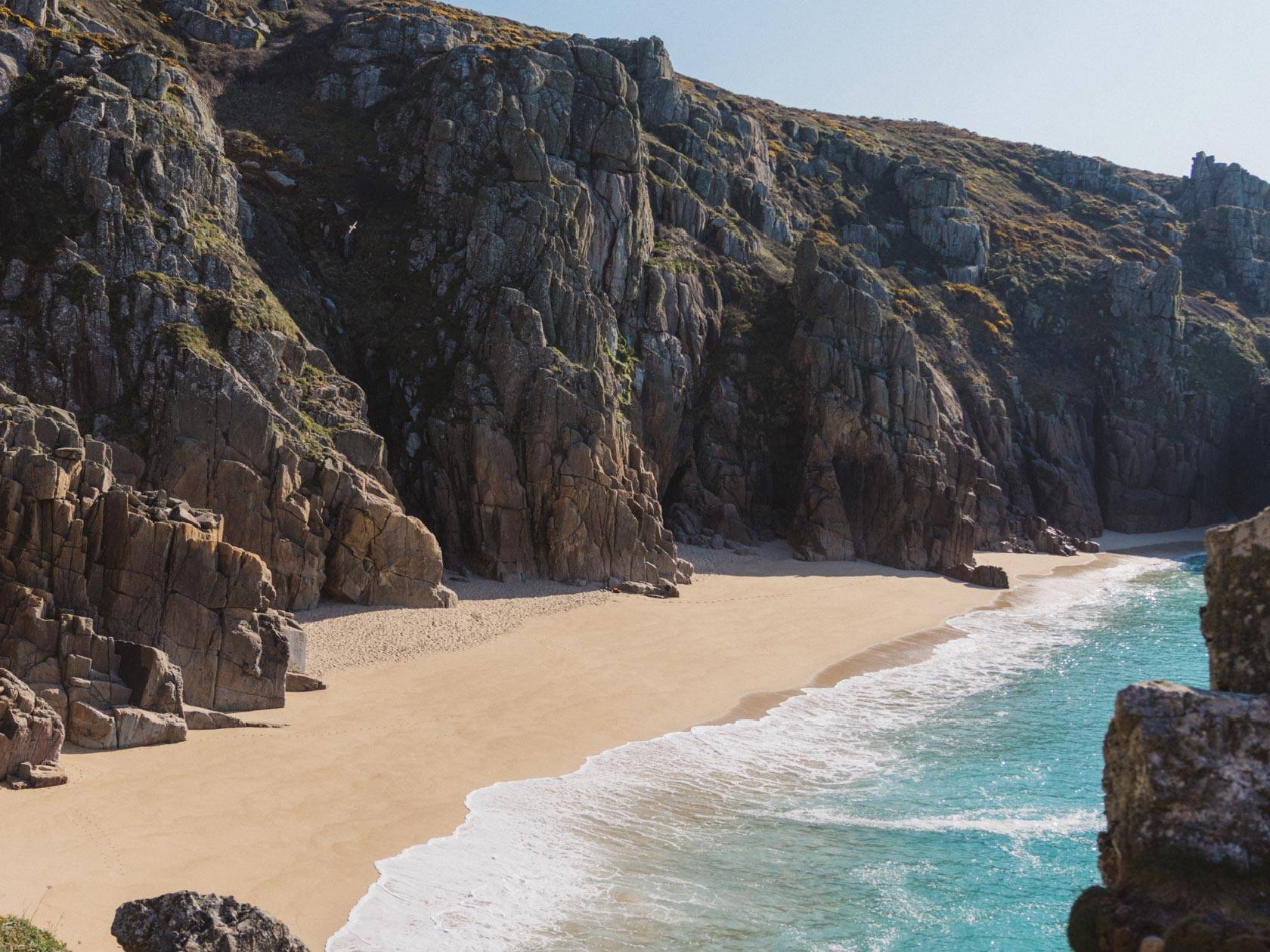 I decide to visit Pedn Vounder on a day off, to see firsthand the effect of a “secret spot” being blown up by the masses. After the bold proclamation to stay away was issued, the press latched on to the story: “Wish You Weren’t Here” read the headline. But being told to keep out has the inverse effect on me and many others.

Arriving early, I watch as the beach’s population swells. A thin stream of colourful styrene bodyboards is being carried down the precipitous path. Beyond the confines of the narrow lanes and fumes of the car park, the shore is still beautiful despite not being tranquil. A scent of sunscreen mixed with flowering gorse and cow parsley hangs lightly in the air. The nudists keep largely to themselves in the far corner, away from the access point.

I think back upon this same scene in the winter. My friends and I occasionally surf down this way. The large tarmac plonked someway up the road is devoid of any cars, the coin machines bound tightly in plastic bags to protect them from the salty air. The colour of the landscape is damp and flat on the walk down to the lifeguard unit. There’s the excruciating pain of the granite chippings under numbed feet post-surf.

Due to the bay’s sheltered orientation, the frequency of surf here hovers in the ethereal zone just above novelty. A time and a place, they say. When it is the time and the place, the sandbars produce ecstatic lefts that spit in short stanzas across the coarse sand. You might get a tube. You might not. Facing south, you can look up through the low winter light at 80-ton Logan Rock, delicately balanced on the cliffs at Treryn Dinas, and sit in quiet contemplation about things bigger than trifling personal dramas. 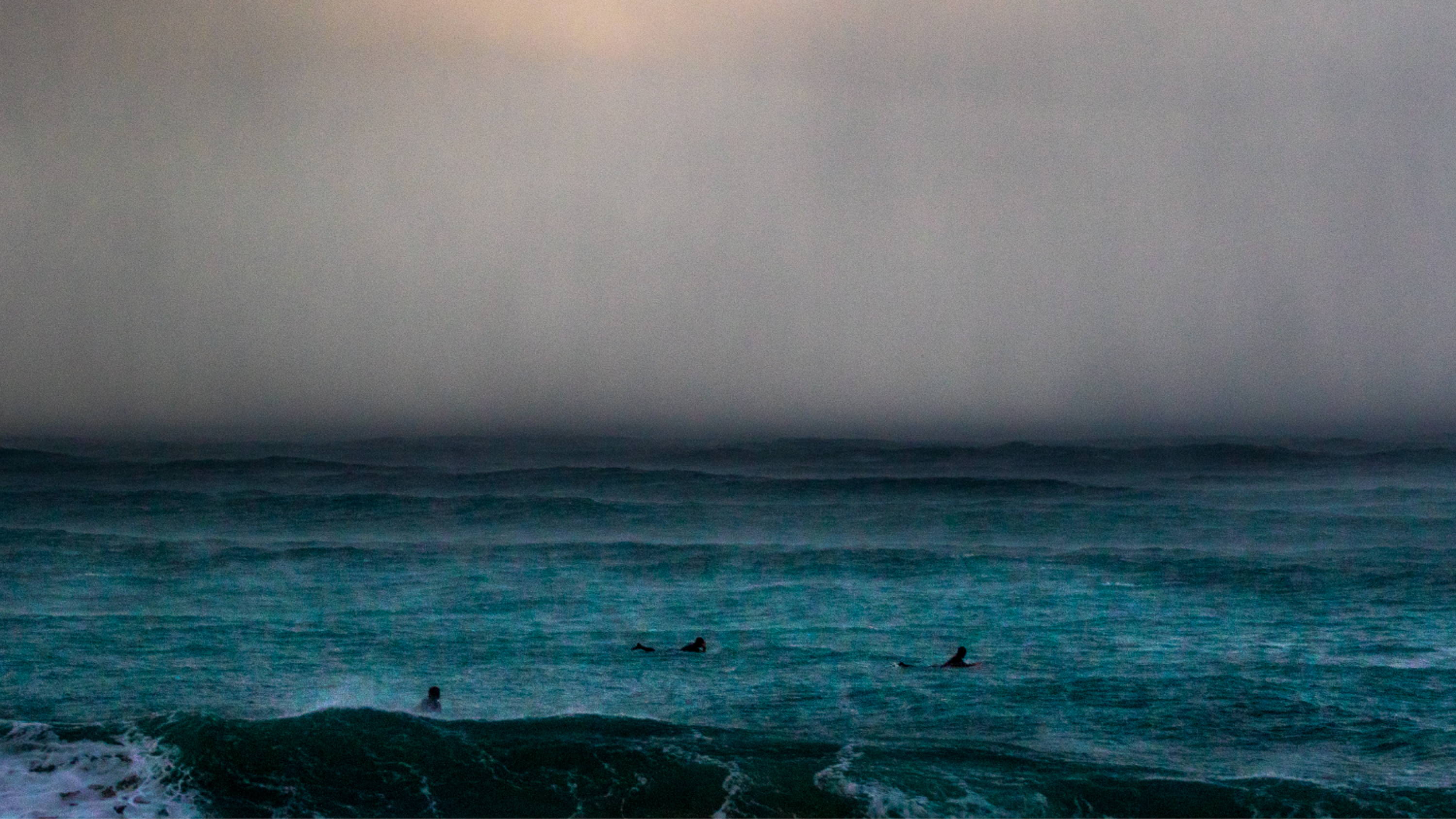 A week after my visit, there’s a return to the normal state of things. It starts to rain. Petrichor fills the air. Wind comes in from the Atlantic. I’m called in to cover a few lifeguard shifts at Porthcurno. My friend Matt and I hole up in the small wooden lifeguard hut, coffee bubbling away on the stove, an empty beach and an empty crossword. What had happened here during the heatwave is now in the past. Matt is grateful. I feel a profound sense of loss. Summer has passed.

We have plenty of time to discuss life and regale with stories of gory incidents. Like the time I’d been first on scene to a middle-aged woman who’d had fallen 10 meters onto the rocks halfway between Porthcurno and Pedn Vounder. I held her fractured skull together whilst my colleague calmly reassured her partner. We struggled to request helicopter evacuation under the towering cliffs. The lady survived, but my colleague didn’t come back the following season.

Matt explains how, in an effort to reduce communication black spots, the local nudists have recently been given a radio with their own “PK” call sign, along with a klaxon to allow them to summon lifeguard assistance to Pedn in event of an emergency. I query why the lifeguards shortened Porthcurno to PK in their radio communications.

“Di-dah-dah-dit. Dah-di-dah,” raps Matt, simultaneously tapping the desk. “Old school. You know, Morse code. It’s what they used to call the cable station up the valley.”

I’m vaguely aware of the history of the area as a hub of communication pre-internet. It was the terminus for a number of intercontinental submarine telegraph cables transmitting messages from around the world to the UK. The bay was chosen for its steeply shelving and sheltered topography.

It’s only later that I discover its true significance in global communications. The first cable was laid here in 1870, connecting Lisbon, Portugal, with Porthcurno. It also represented the final link in the Great Britain-India cable. Packet ships, which had previously sailed messages and news around the world in weeks, were instantly superseded by the transfer of messages in minutes. Porthcurno became the unlikely gateway to a modernising British Empire, with cables linking the country to all corners of the planet.

By the outbreak of World War II in 1939, Porthcurno had grown into the largest submarine cable station in the world, capable of transmitting over two million words a day. In an effort to protect the vitally important telegraph station, two tunnels were carved out of the granite bedrock and the entire operation moved underground. Cognisant of the risk of sea-led attack, the beach was decked out with an array of armaments, including pop-up flamethrowers positioned under the sand. 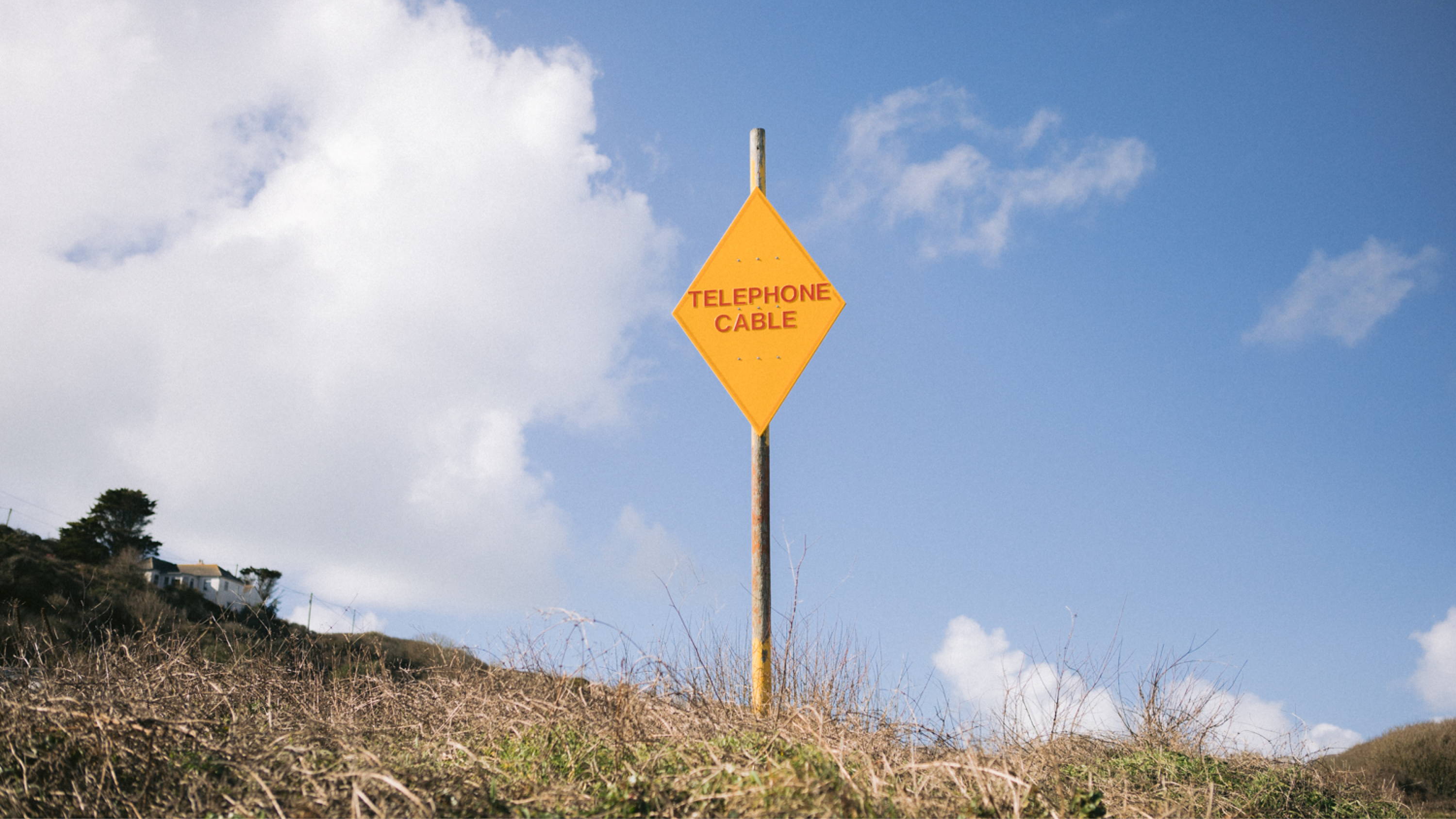 Today, on a dreary autumnal morning, it’s hard to envision its strategic importance. A solitary seal bobs in the shorebreak, looking back at the empty stretch of sand once lined with defensive posts. PK’s unlikely story, tinged with irony, speaks to me on a number of levels. On one hand, it’s an isolated idyll. On the other, it’s a global nexus for connectedness. Its success as the latter contributed to its digitally driven downfall in the summer.

As a surfer, I can sympathise with the plight of the nudists. Their special place, deliberately chosen away from prying eyes, has been presented without their consent and out of context by those outside the scene. One newspaper even quotes visitors complaining about their “inappropriate presence.” Long-term relationships to a place have been quickly outed for individual online bragging rights. What harm could a picture cause?

My friends and I are all too familiar with this story, having seen the effects firsthand at the nearby surf reef, one of the few zones in the county capable of being world-class on its day. Reckless posting of “we just scored” images and location tags had increased crowding on later swells.

In the lineup, we were governed by a set of indelible surf laws and etiquette. Those on the cliffs taking pictures were not.

The brief social-media-induced madness that had screwed up the summer for the nudists remained at direct loggerheads with my own wintertime experiences down at PK: magical, quiet moments in mostly average waves. It remains an extraordinarily scenic place, visited by a diverse range of wildlife including migratory basking sharks. And while the staff of Cable & Wireless is no longer present to transcribe telegraphs from across the ocean, it’s still one of the main places information flows in and out of the country, through fibre optics laid out like tendrils under the sand.

Yet, in spite of its history, there’s still no mobile-phone signal down on the beach. All those images and videos that served as units of cultural currency in the heatwave had been captured and stored on devices, transported out of the valley by foot, then later freed into the digital realm like helium balloons into the sky. There were only a few of us who questioned what would happen once they burst.