The Broadcast / Monsters Of Mullaghmore: Behind The Lens

Monsters Of Mullaghmore: Behind The Lens

If you haven't yet laid eyes on Conor Maguire's record breaking wave at Mullaghmore, well... what have you been doing? Harnessing the raw power of storm Epsilon, the young charger shattered records to ride the largest wave ever surfed in Ireland. (Pictured below.)

In the water to capture the iconic moment was photographer and Irish stalwart Gary McCall. Once the foam had settled, we managed to catch up with Gary to ask what it was like to be there for such an historic moment, and what goes in to preparing for these monster swells. 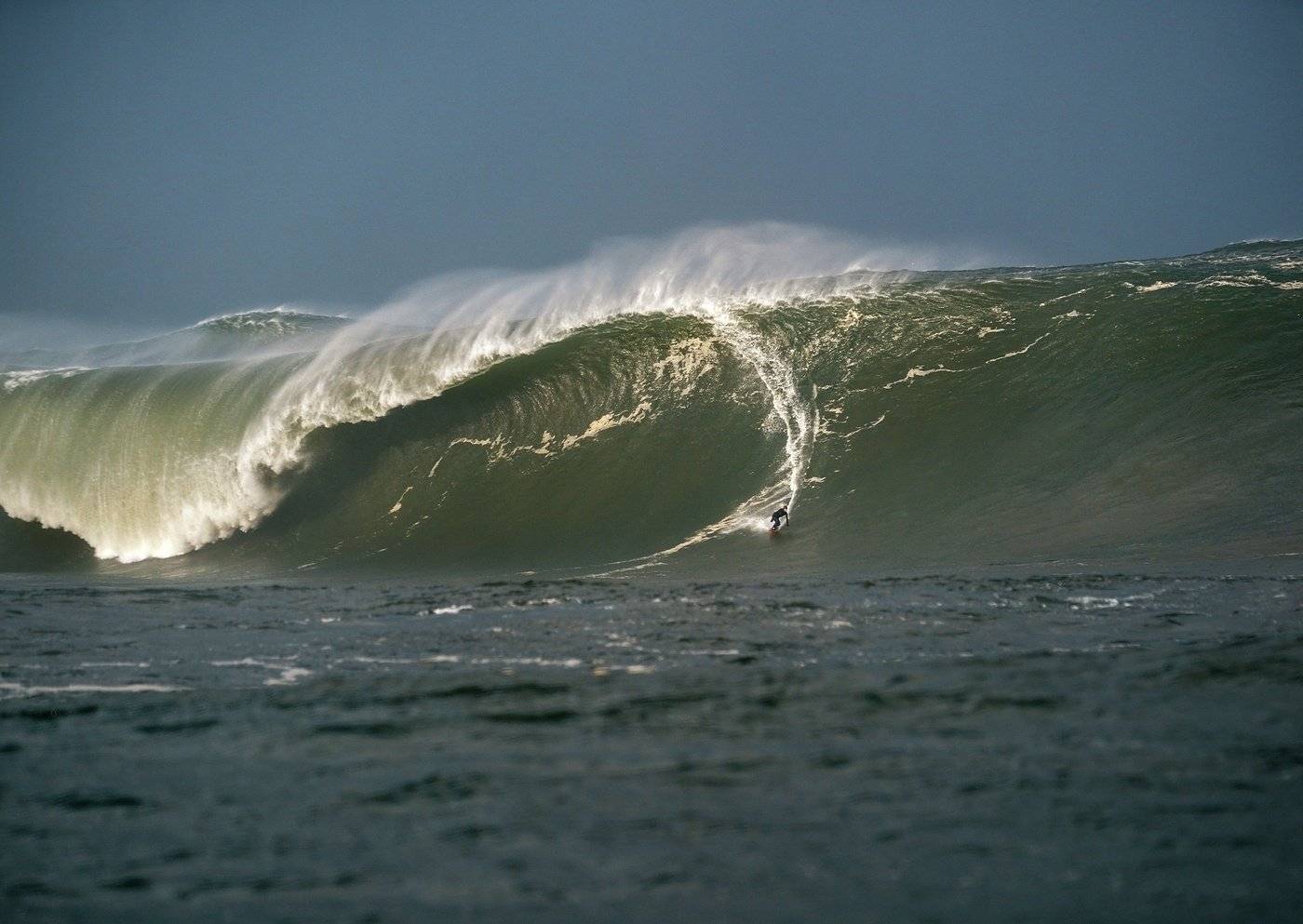 How did the call for this day go out and how do you all assemble?

I’d originally written this swell completely off limits for everyone, due to Ireland going into full lockdown that week. Ignoring the chart and thoughts of how it might look at Mullaghmore.

Then, two days prior Peter Conroy called me and explained the plan. It seemed legit but I was initially unsure in my lockdown brain. Soon after I chatted with Finn Mullen and realised it was fully on. Geesus! So we had the best core safety crew organised and even some corporate support. Excitement and anxiety were soon to follow. 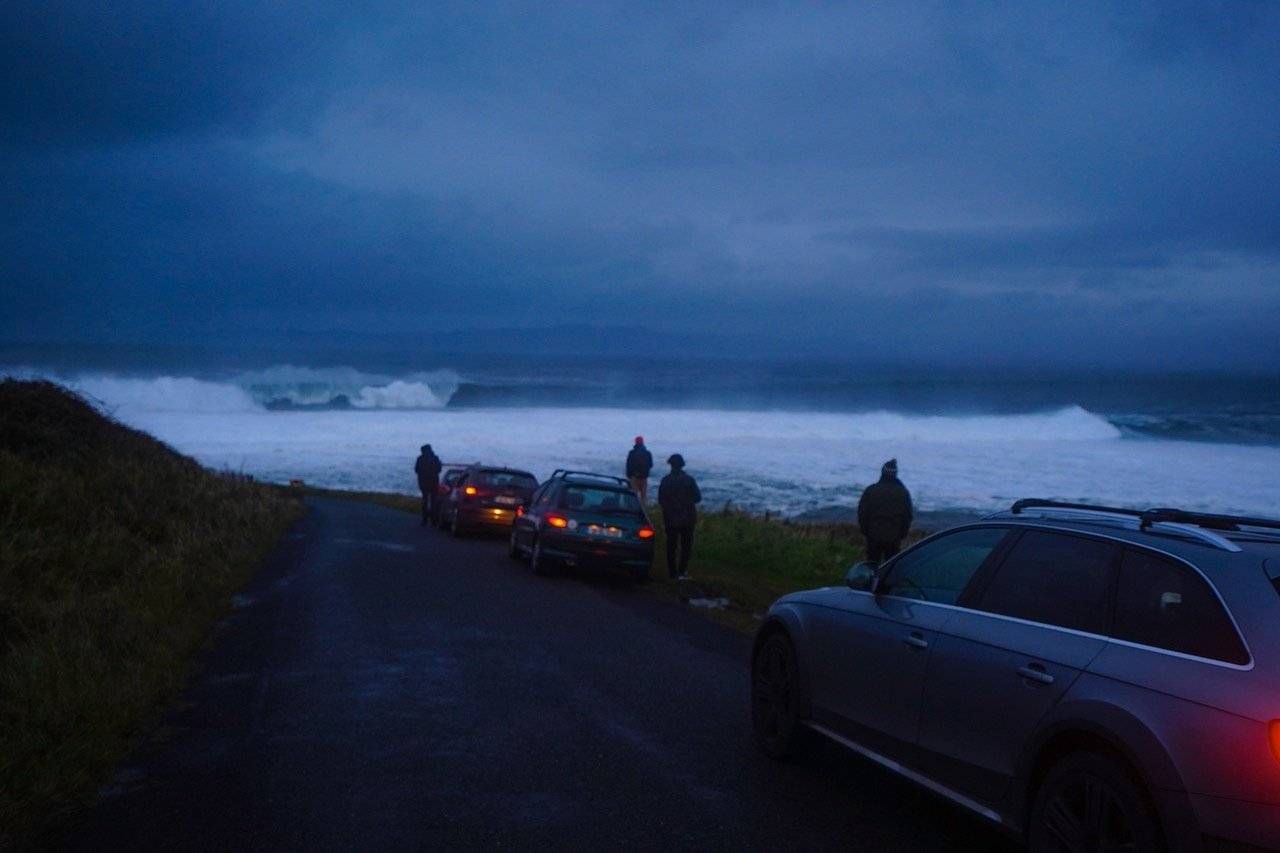 What does it actually feel like to be in the moment capturing career defining, life threatening, and record breaking moments like this one?

Well the scenes can be pretty crazy, but I’ve probably become a little too familiar with the beauty and the beast of Mullaghmore. This became immediately apparent as we left the surging cauldron of the harbour and approached the reef last Wednesday. Every sense of familiarity was sent packing as we watched sets of unknown magnitude darken the horizon. The huge waves were feathering a long way out and swinging wide of the usual channel comfort zone. A ridiculously huge 20 second period seemed to hold an incredible volume of water in each wave, making mutant shapes as it drained the reef, causing double ups near the take off slab.

Watching the medium-sized ones implode and eat themselves was stomach churning. Conor and Barry were geared up for the bigger ones though. I was thinking how stressful it must have been for them out back. Although, true to usual form, they seemed calm and very in-tune with the nature of the beast. Barry, on some heroic level of ski driving, was picking off terrifying 60ft sets which held up better and broke well down the line towards us.

I screwed up shooting many of the early waves in the session, having focus issues with my camera and droplet issues with the housing. A case of kicking off the season with a bang and being thrown in at the deep end with rusty tools! As is often said with my flying job: proper prior planning, prevents piss poor performance. 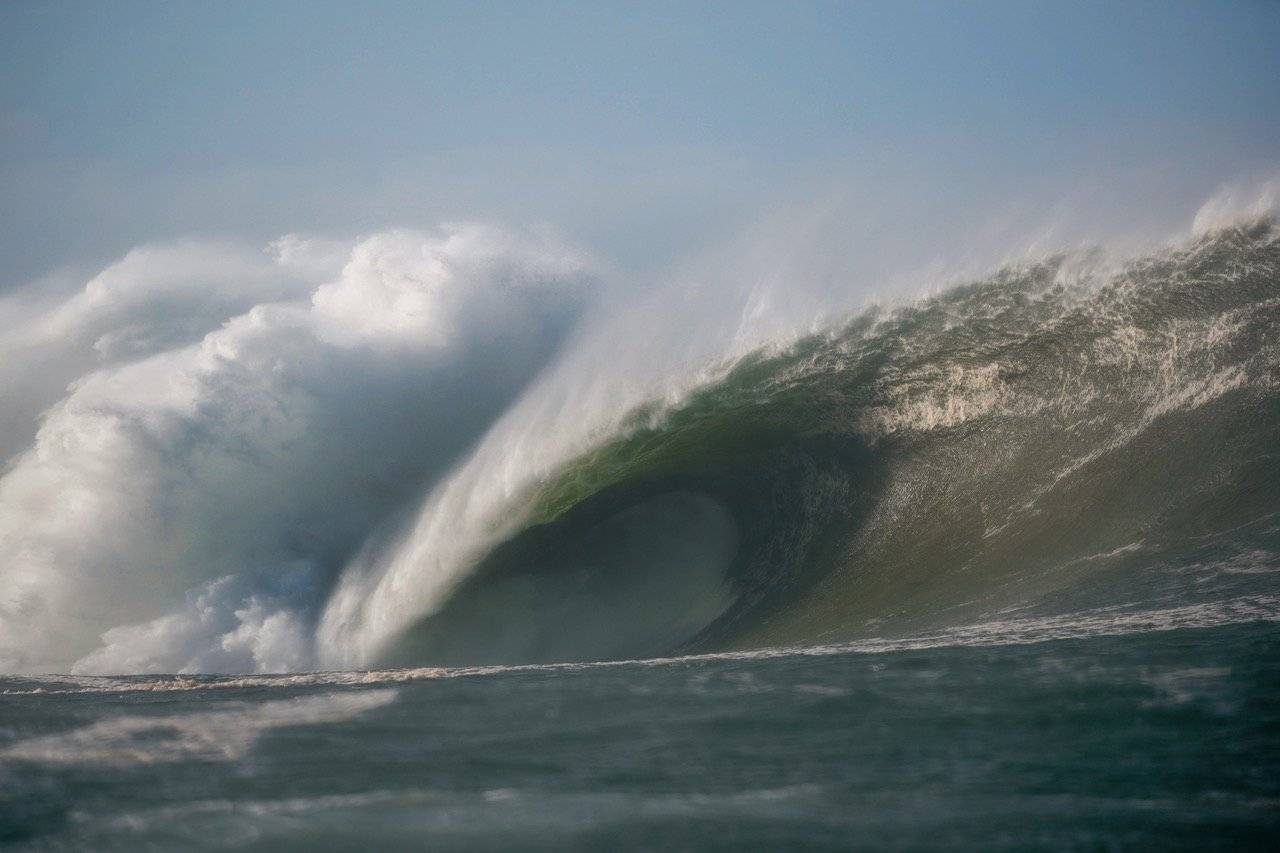 My mate Oli was driving my ski that day. I normally like to drive myself solo and shoot but it was great to sit on the back seat and commit my full attention to shooting and ironing out any camera issues for when it mattered.

As the bomb blast spit and spray settled in the air from the early waves in the set, there was a shout; "He’s on!" We look across to see Conor on a beautifully clean giant wave which almost seemed to break in slow motion due to its size. I went to just put the camera down and watch it happen, but managed to keep the things mostly in frame with the help of Oli keeping one eye on our position and what was headed our way.

I am really stoked for Conor to get this opportunity with such support and to see it received with such positivity amidst a year of doom and gloom media and constant restrictions. Stoked to see these conditions met with such professionalism and humility. A testament to Conor’s ability and character. 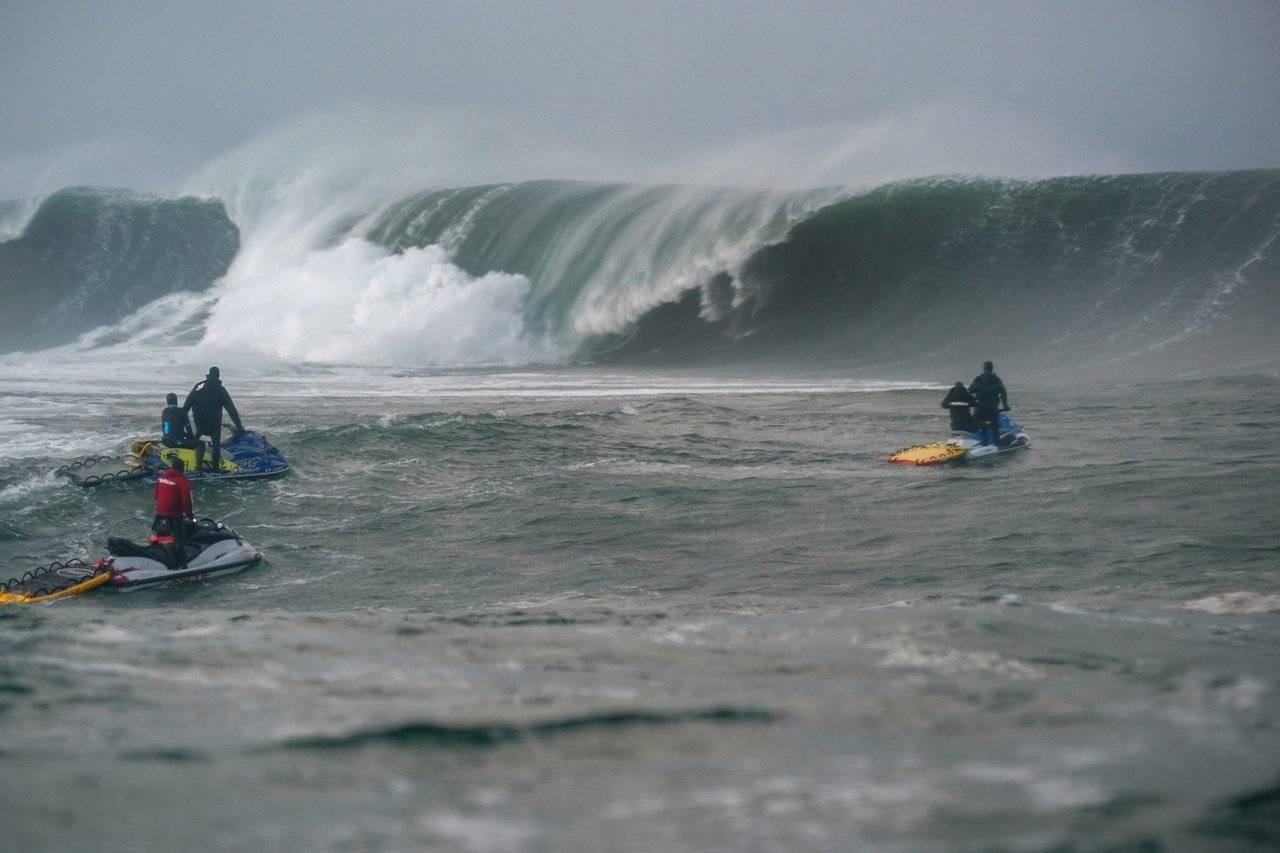 You’re no stranger to the Mullaghmore line-up – how has your perspective and understanding of the place and wave changed over the years?

I think my first time out there was around 10 years ago, shooting from a Rib on some tow sessions with the likes of Paul O'Kane, Cotty & AL, Richie & Gabe and Barry, Dylan & Peter. The 2011 big wave contest was pretty incredible. The whole geographical setup lends well to a safe contest and viewing platform. There has obviously been a lot of big name internationals fly in for swells over recent years and it would be amazing to see a similar contest happen again. 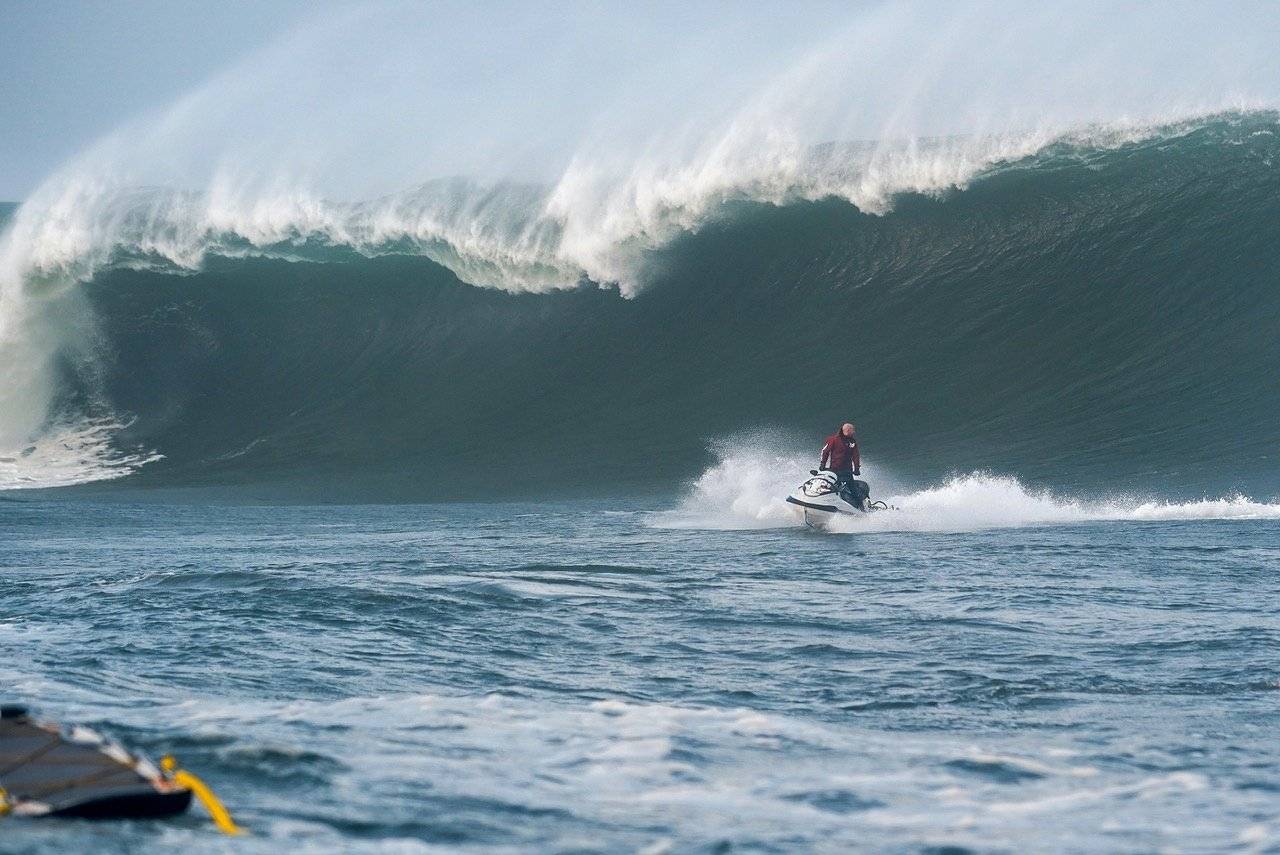 What else needs to come together and be considered to shoot in conditions like this?

Peter Conroy’s work to establish the Irish Tow Surf Rescue club over the last decade has been absolutely fundamental when dealing with waves of consequence like Mullaghmore. Working closely with authorities, developing rescue techniques, having a certified training programme for dozens of members and providing vital hardware and a network of medical kit. The clubs framework has lead the way to set a bench mark which has spread globally. He has been able to use his unique skills as a firefighting paramedic and big wave surfer to pass on vital knowledge and plain common sense to many of us for when the shit hits the fan.

With increasing numbers of tow teams and big wave paddlers, I would urge anyone venturing out in heavy surf situations in Ireland to drop Peter a message and join the club or even to complete the rescue course. The small membership fee helps to provide important kit and membership promotes a safer, more coherent community and session for everyone. We all owe a lot to the club and to Peter! 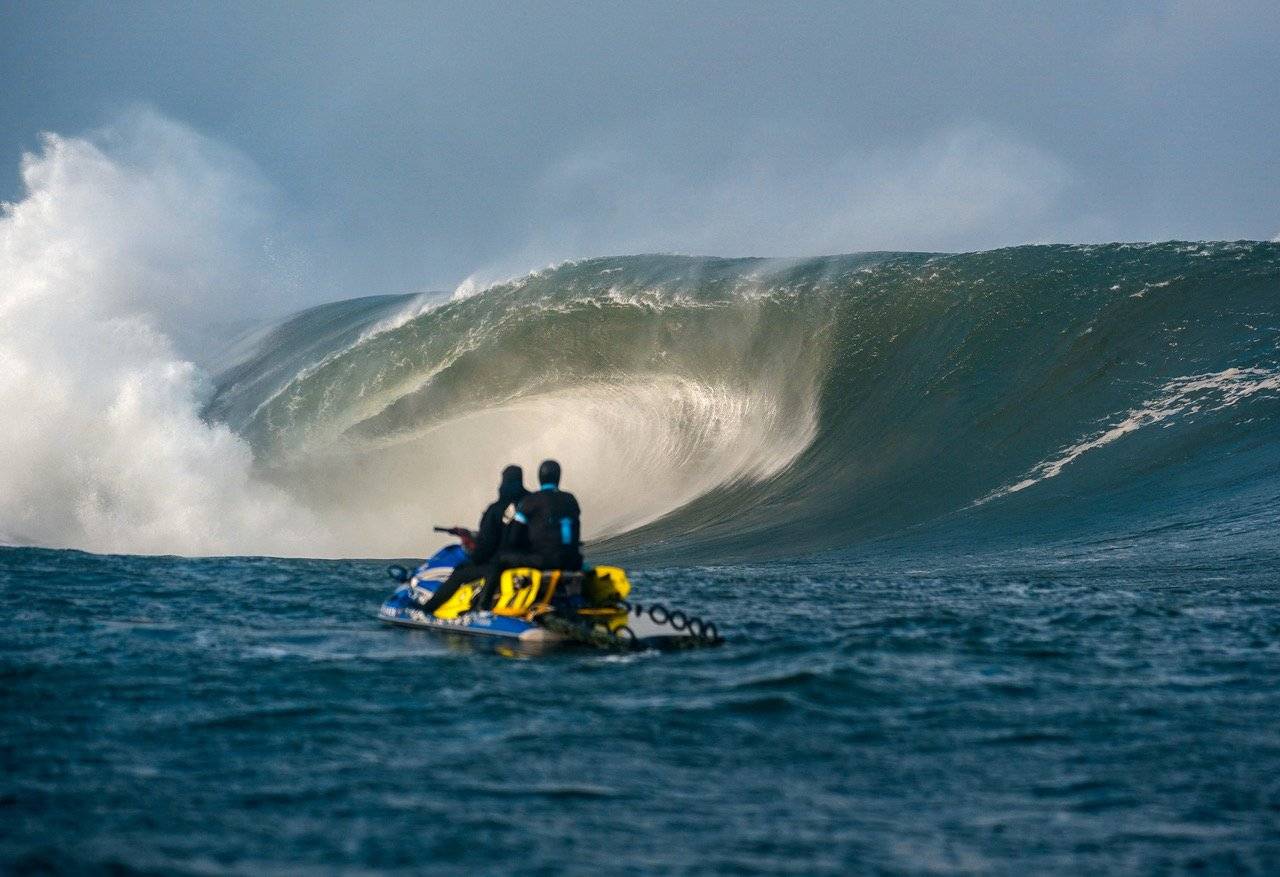 What does shooting in the water at such a place and ocean environment bring to you and your life behind the lens?

Well, I'm lucky to have a work routine that enables plenty of water time over winter. From early spring through to late Autumn I work as an aerial mapping photographer for a Scandinavian company. It's an amazing job, yet a challenging routine. Our company operate 8 relatively small aircraft fitted with large format mapping cameras and Lidar sensors throughout Europe and I tend cover much of the Scandinavian region. We chase weather windows over our project areas and get to drop down to some remote beautiful areas in Norway and Sweden.

The constant travel-bag lifestyle, buzzing around the sky and time away from home does take its toll though and come October I'm excited to reconnect with family and friends and spend time in the water surfing and shooting at my own pace again.