Pushing upriver, navigating the French lock system, and the sad departure of a member of the family. In the second instalment of A Tidal Voyage, we follow the journey of Will Thomson and family as they traverse the Canals De deux Mers on their way to the winter shelter of the Mediterranean. 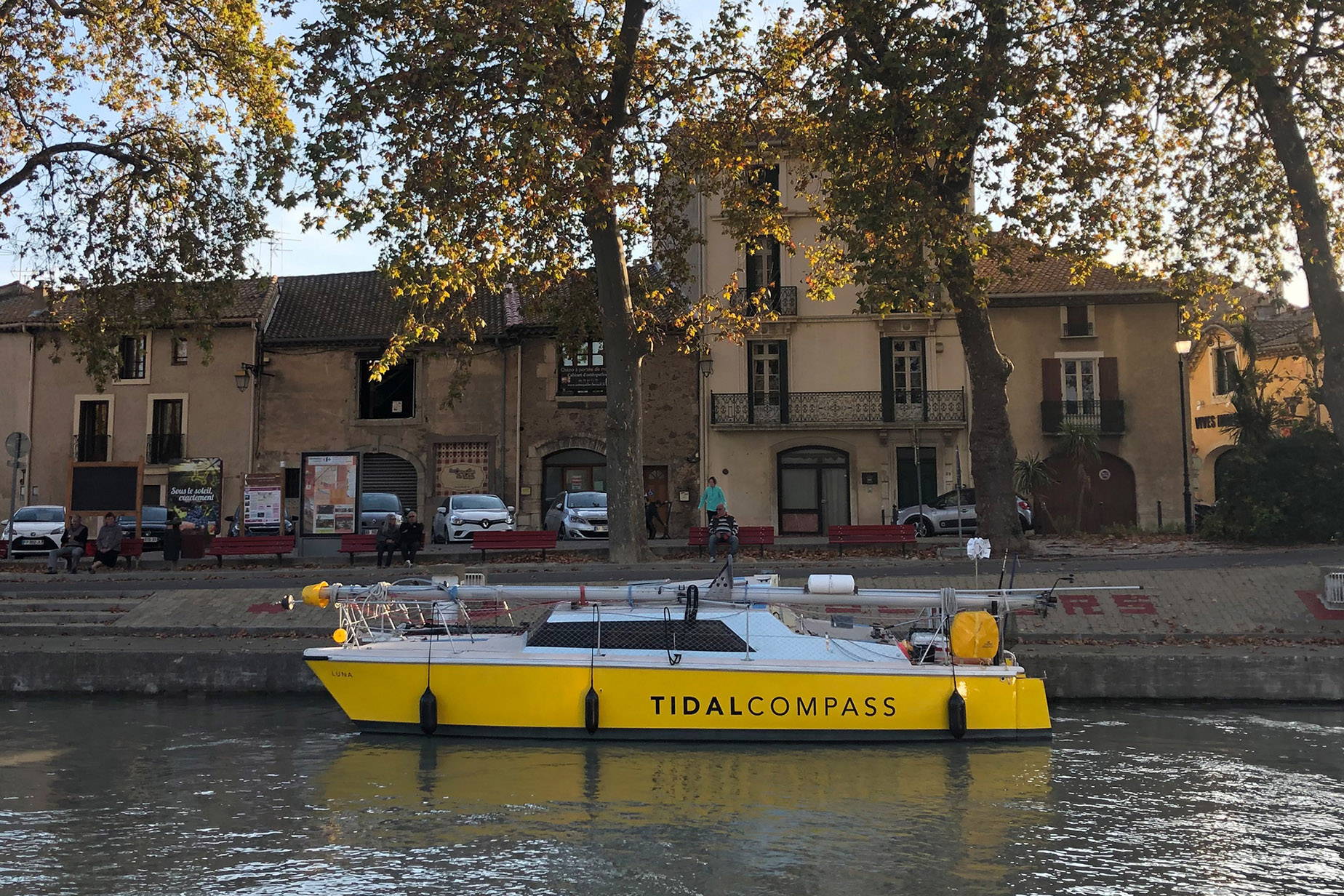 If you have a boat that is narrower than 5 metres and doesn’t touch the seabed in 1.5 metres of water, you have two choices if you want to sail from the Atlantic to the Mediterranean. You can either go around Cape Finisterre in Spain or you can take the ‘Canals de Deux Mers’ through the French countryside. Having sailed our 4.5-metre wide catamaran around the Bay of Biscay to Royan in South-West France, we were at the junction where you have to choose which way to go. Turn right and go around Finisterre, risking winter storms, massive swells and a pod of Orca’s attacking boat’s rudders. Or turn left, take a leisurely cruise through France and arrive at the same place. With the responsibility of two young children and a pet duck the sensible choice was the canals, so we set sail for the first lock ninety nautical miles up the Gironde Estuary.

Because tidal streams in the Gironde flow faster than Luna can sail, it was only possible to travel during the flood tide when water is pushed inland. So we broke up the journey into three 30-mile passages, heading first for the harbour of Pauillac, whose port entrance is marked by a huge bottle of red wine. Still, we had to keep our wits about us; the harbour master insisted we arrive within 15 minutes of high tide because the currents are too powerful at any other time. We followed his advice and from Pauillac rode the next flood to Bordeaux, mooring alongside the beautiful city centre for the night. The following day’s flood was supposed to start around 11am, but the ebb was still flowing so hard that it was making deadly whirlpools around the legs of the first bridge we had to pass through. Every fifteen minutes I walked over to the bridge and checked the streams, but the offshore wind was delaying the flood and while the vortices were getting smaller, they were still dangerous to a small boat like Luna. We were losing precious minutes to get upriver before the evenings ebb, but finally, an hour and a half after the flood should have started, the last whirlpool faded; it was Slack Water. I ran over to Luna, fired up the engine and unslipped the mooring lines. We had thirty miles to travel and just five hours to do it. 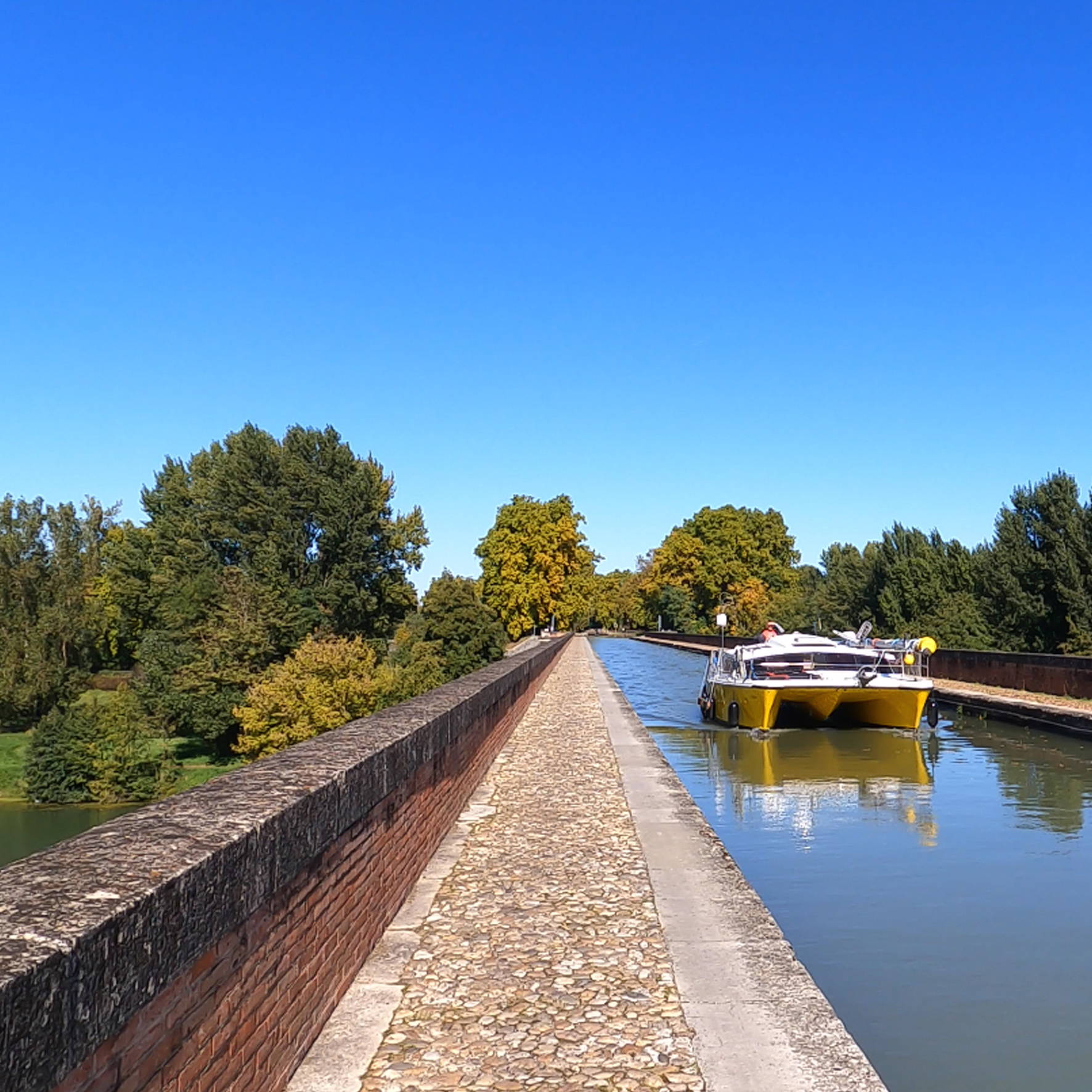 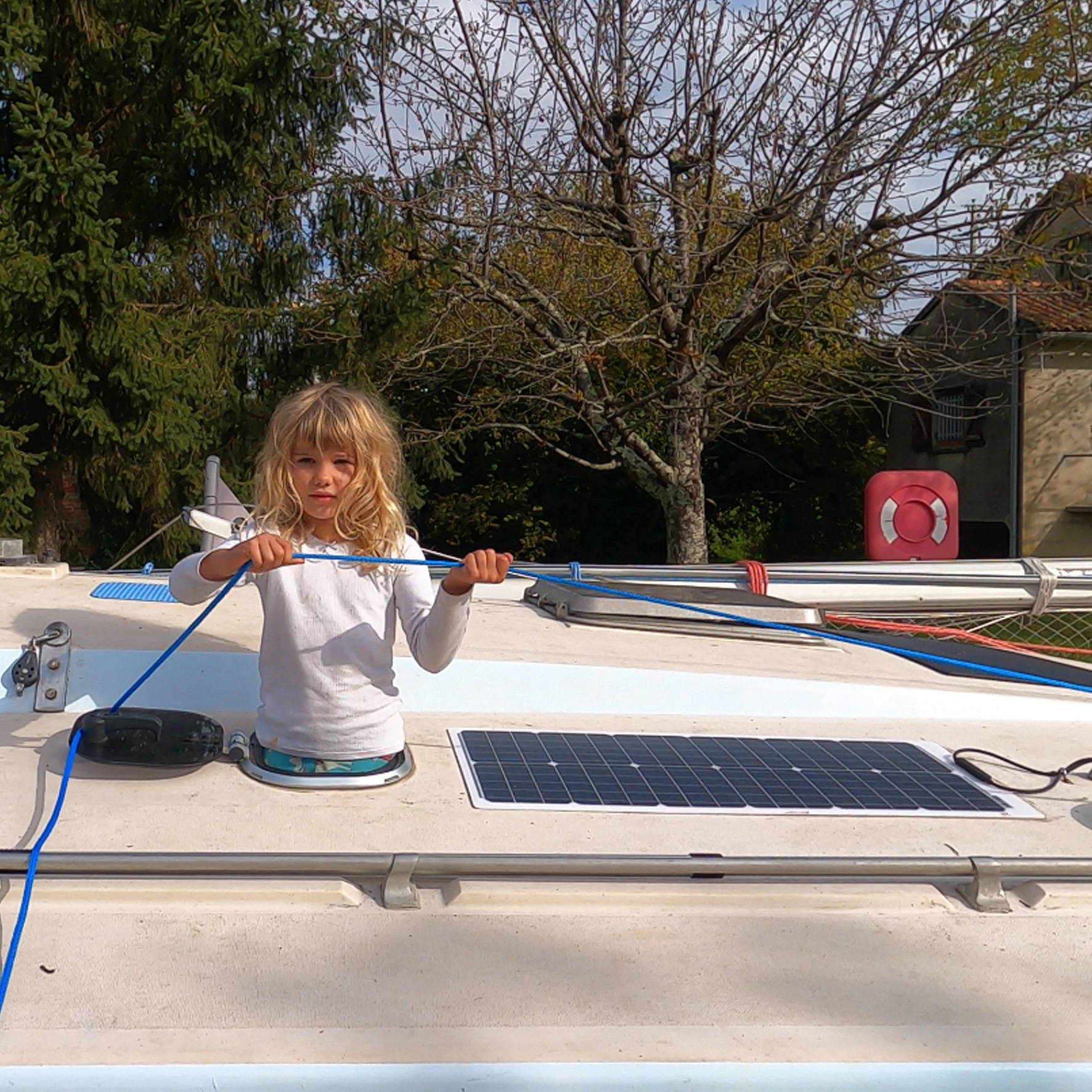 Otty getting hands on.

That day pushing up the river was unforgettable. With the power of the flood tide we raced past vineyards, picturesque villages and hundreds of fisherman’s huts built on stilts over the water. But as the hours passed our speed started to drop; the flood was weakening. Would we make it to the lock before the ebb started and halted our progress? I kept looking out for clues of a current; water patterns around posts, bubbles floating on the surface, twigs drifting in the stream; the signs were getting weaker and weaker. But finally we rounded a bend and there it was; the first of more than a hundred locks connecting the Atlantic Ocean with the Mediterrean Sea. We motored in and only just fitted either side. The walls rose up for several metres and the lock-keeper peered down from over the edge, giving instructions in French on how to tie onto the vertical posts. All secured, he pressed a button and the gates closed behind us, followed by a waterfall cascading from ahead. Luna strained on her ropes and inch by inch, minute by minute, she rose up until we were at the top of the lock and the mighty river was far below. 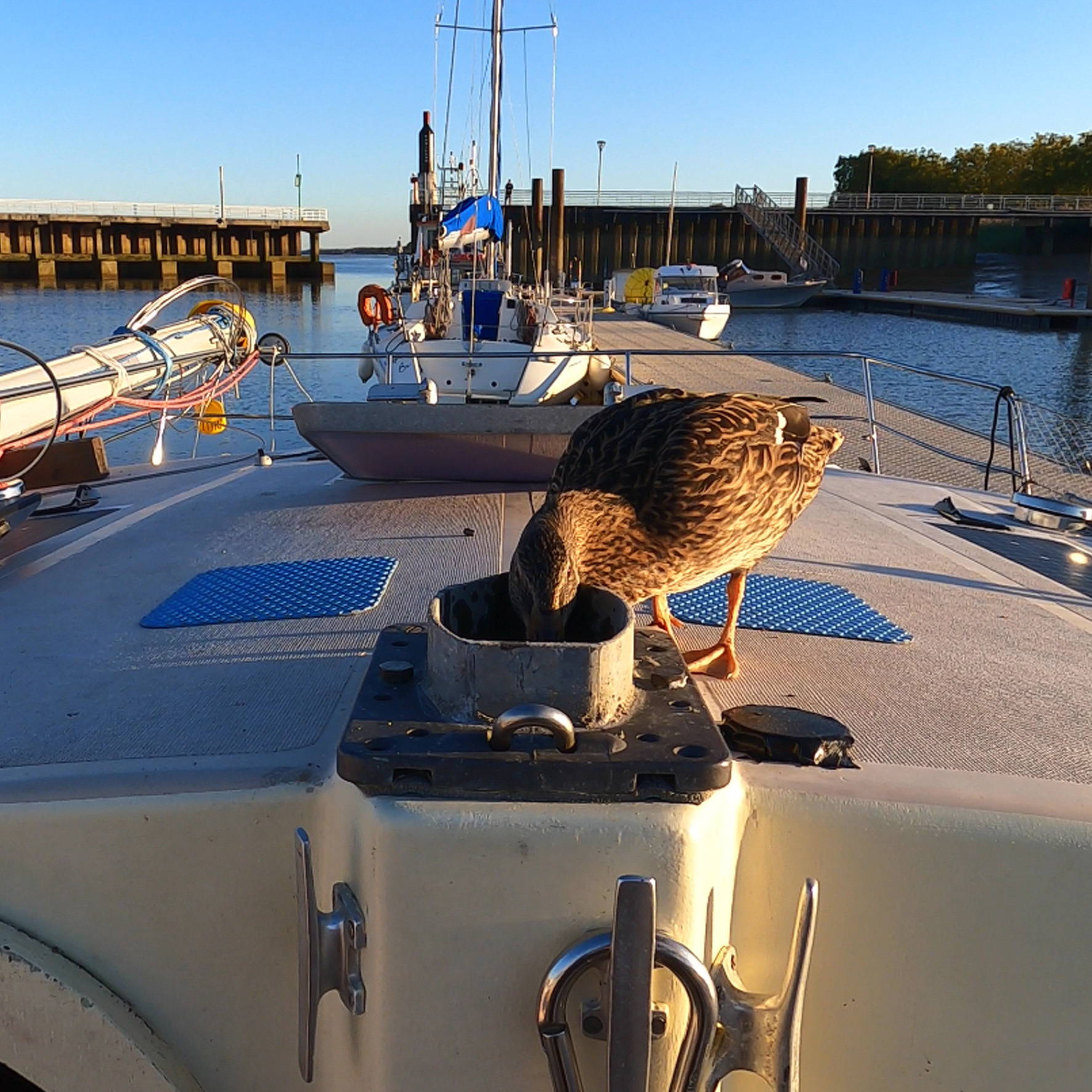 Herby getting curious about the missing mast... 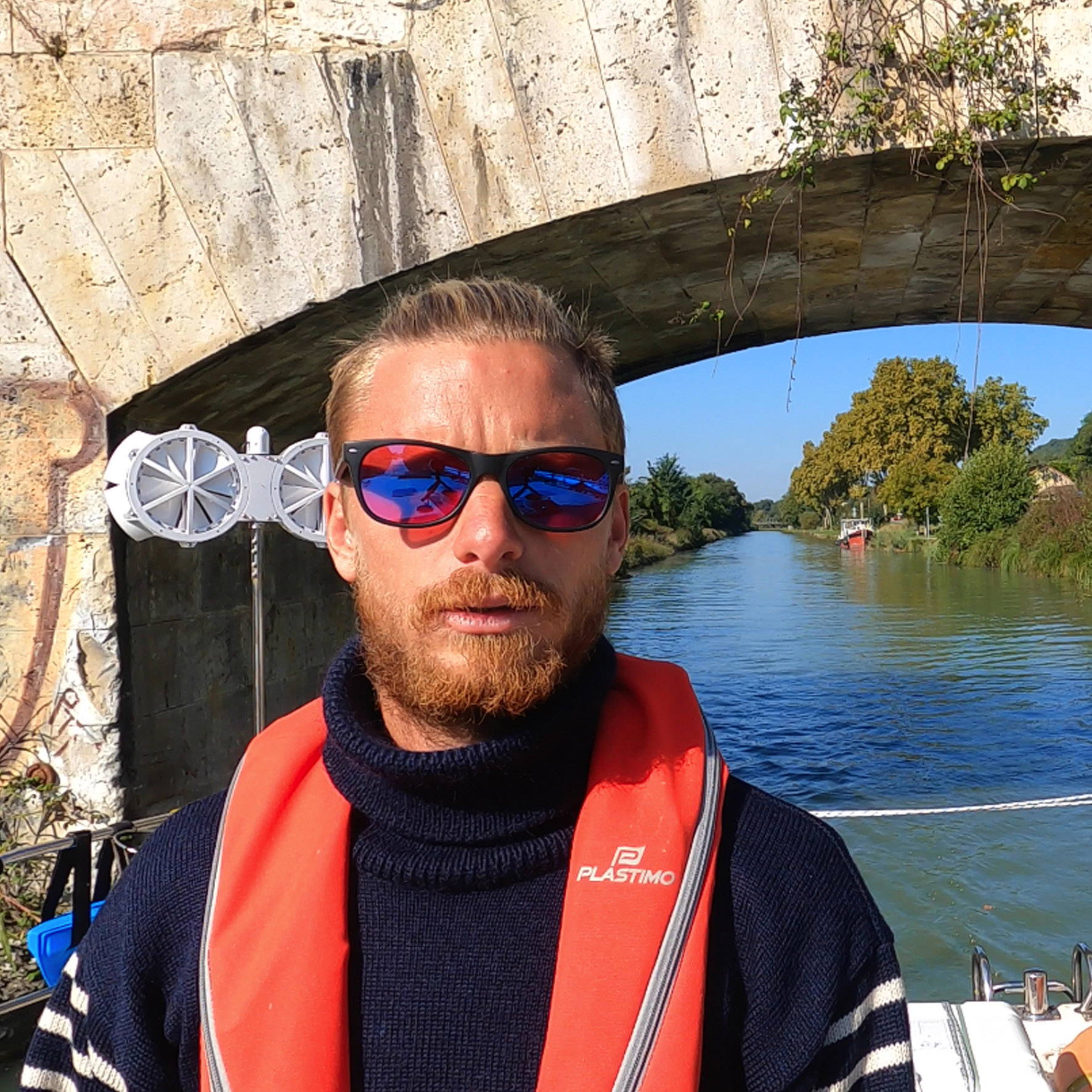 That night, Herby left us – she jumped up onto the roof, quacked, and set off on a straight line back to the river. She had been socialising with other Mallard ducks as we travelled upstream and it was clear that she was feeling the call of the wild. We were all devastated, but there was nothing we could do. She belonged in nature. Still, we would call out her name to all the mallards we saw and hope she would come back and land on the roof. But with every kilometre passed there was no sign of her, so we settled into our new family dynamic and soaked up the peaceful rhythm of France’s canals. The simplicity of travelling the inland waterways certainly took a huge weight off my shoulders; all we needed to do was turn on the engine in the morning and go straight. I no longer had to spend hours studying charts to find safe routes, analysing the tides, currents, winds and swells in search of windows of opportunity – day or night - to safely get my family from A to B. In the canals we could just sit back and enjoy the view, wandering around villages after a day’s cruising and savouring the local wines each night.

While the canals were infinitely easier than the Atlantic, there were still obstacles to overcome. Being autumn, leaves got sucked into the coolant inlet, blocking the filter and overheating the engine. Roots floating in the water tangled around the propeller and risked damaging the gearbox. On one misty morning we nearly got a hole in the hull from a submerged tree blocking the entire channel. Another time when the engine stopped pumping water I had to take apart the whole cooling system and found an acorn blocking one of the pipes. Then there were the cross-currents when approaching a lock; just a few metres before the entrance the surge of water would push Luna to the side, spinning her out of control and taking herculean efforts to overcome - judging by the multi-coloured paintwork adorning the walls many others had been less successful. Then there were forces out of our control; at one lock, the gate broke and we were told it might take a fortnight to fix. With the canals closing for the winter in three weeks and hundreds of kilometres still to go, it looked as though we may not even make it to the Mediterranean. 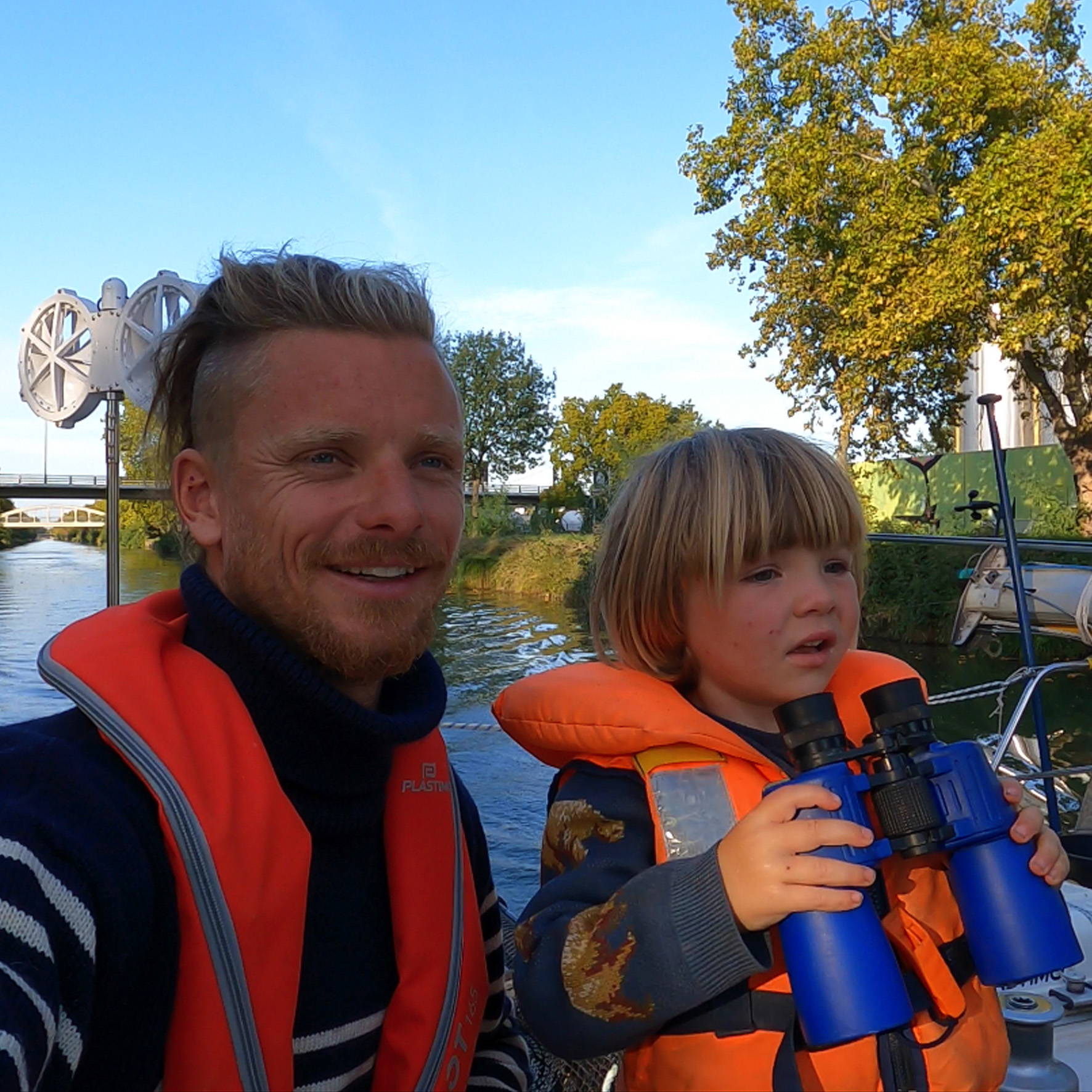 Boys at the helm. Dad Will shows Arva the ropes. 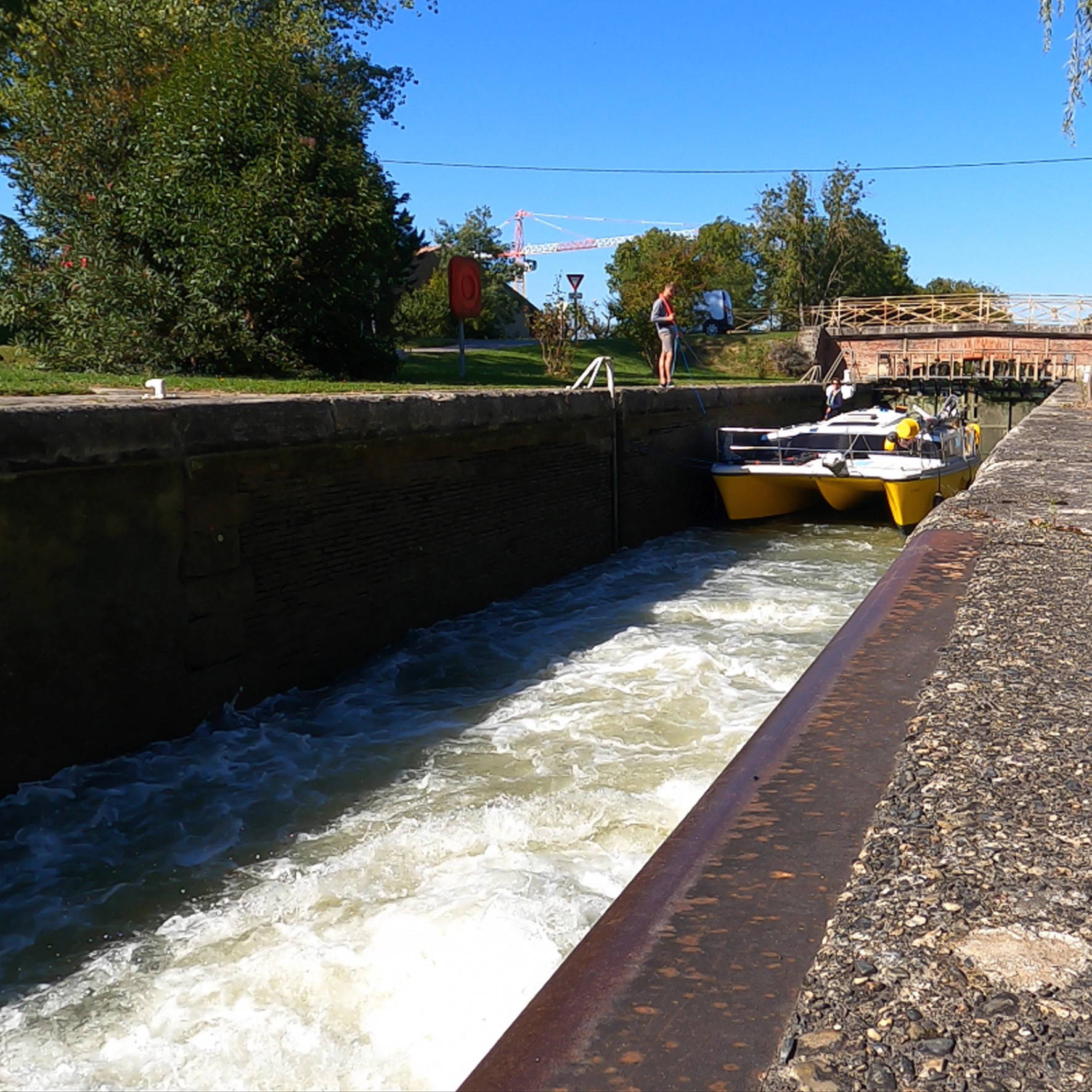 Luna in a lock, navigating the French canal system.

But luckily the engineers fixed the gate after four days and we pushed onwards. Near Toulouse we made friends with a group of paddleboarders came into a lock with us instead of carrying their boards around. In we all went and up we all went, them surfing in the whitewater as the lock filled up. At the top, being English we politely let them go out first - but just as we got to the entrance the gates started to automatically close. My only option was to quickly reverse back into the lock to avoid being crushed by the huge gates, but then the water started draining so I had to lasoo our mooring lines to the bollards to keep Luna under control. But one of the ropes got tangled in Arva’s fishing line, so I had to I had to frantically untie the line from the boat and then retie it to a new rope, extending the length so we could descend all the way back down to the bottom without anything breaking. The whole drama then made the automatic lock system so confused that it went into meltdown and we had to wait for a lock keeper to come out to manually over-ride the system. The whole escapade put us back half a day, but luckily this was our last misadventure and with just 48 hours until the Canal du Midi closed for the winter, we cruised out into the Mediterranean.

Look out for the final installment in the coming weeks, and catch up on the beginning of A Tidal Voyage with their crossing of Bay of Biscay, The Atlantic.