The Broadcast / A Tidal Voyage: The Mediterranean

A Tidal Voyage: The Mediterranean

A new sea. A new challenge. A new appreciation for both things left behind, and the connection formed between captain and vessel. In the third and final instalment of A Tidal Voyage, the Thomson family reach the Mediterranean, and Will reflects on the 1000 nautical miles they’ve shared.

Words & Images by Will Thomson 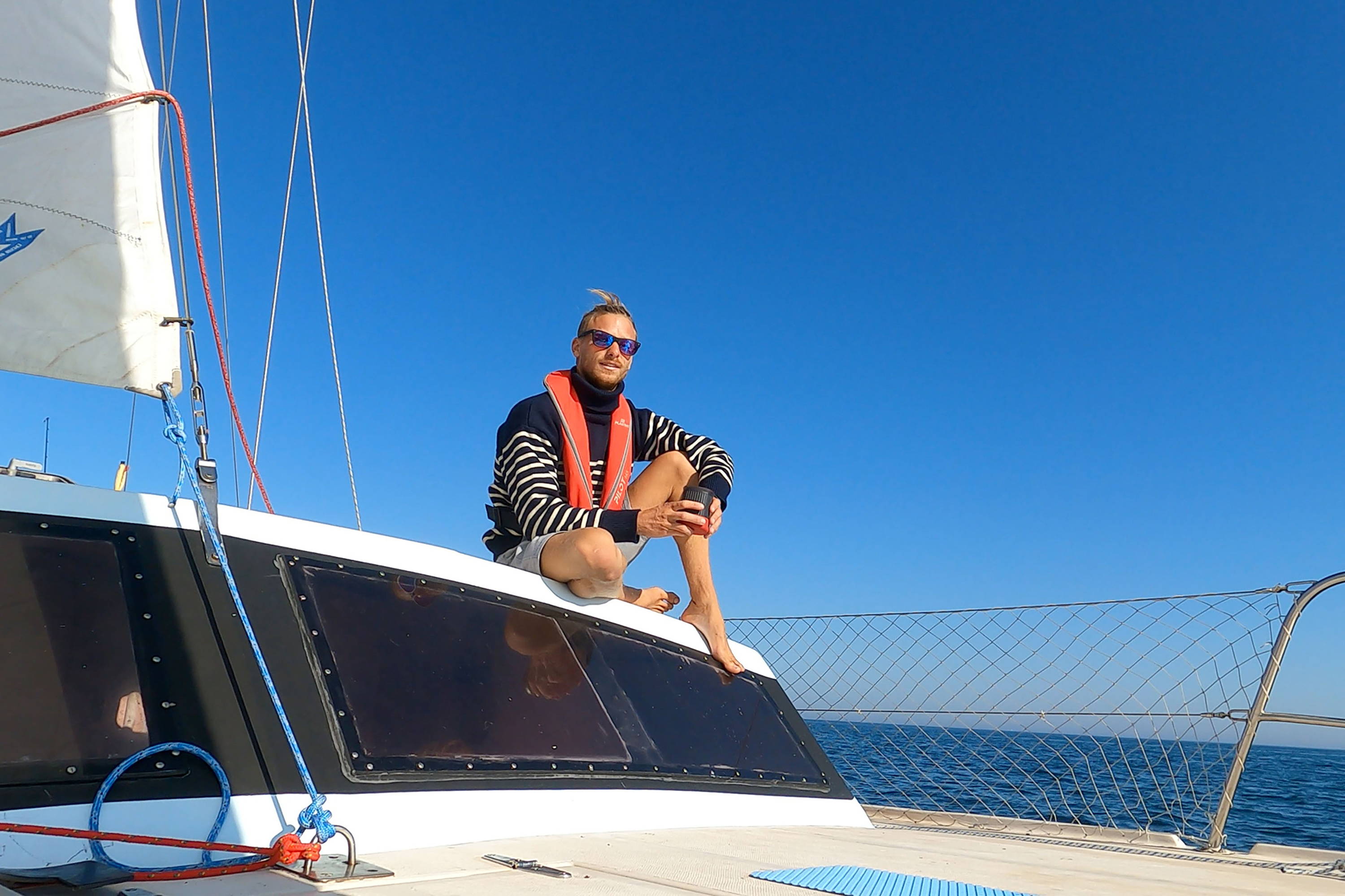 After a month of cruising through the tree-lined French canals, Luna raced out into the Mediterranean and embraced the vast horizon. Her mast was lashed onto the roof so she could fit under the hundreds of bridges in the inland waterways, so our first task was to ‘re-step’ the mast and turn her back into a proper boat - a sailing boat. To do this we headed to the nearest boatyard and a crane was brought over, lifting the mast so that it dangled in mid air. We then carefully lowered it into place and secured the myriad of metal rigging wires that hold it in place, each allocated to a specific bracket on the boat and tightened to just the right tension. With this complete, the next job was re-attach the sails to the boom and furler, securing all the ropes (halyards and sheets) to their designated cleats and re-wiring the mast electrics for navigation lights, GPS and VHF Radio. The whole process took an afternoon and each step was carefully checked and re-checked until we were happy that Luna was ready to go to sailing again without the mast crashing down.

Before setting out into the Mediterranean, my plan was to spend a fortnight in the bustling port city of Sete to catch up with work and to get a feeling for this new environment we found ourselves in. While many people think of the Mediterranean as a placid lake, it is in fact a vast open sea with ferocious storms in the winter. What’s more, they often arrive with little to no warning, creating short-period waves that are surprisingly big and close together - not a good combination for a small boat like Luna. So instead of rushing out and putting my crew and boat in danger, we sat back and got a feel for the climate. I also needed to build up my fitness; after a month of sitting at the wheel in the canals my legs felt like jelly, so every day I walked up to a viewpoint on the top of Mont St Clair overlooking the city, gradually building fitness and acclimatising to the winds and swell in this notorious ‘Gulf of Lion’. The main thing I noticed is that winds had an intensity I have not experienced before; in the Atlantic they seemed to breathe with a rhythmic inhaling and exhaling of gusts, like a giants’ steady breathing. But in the Mediterranean the winter wind simply shrieked. 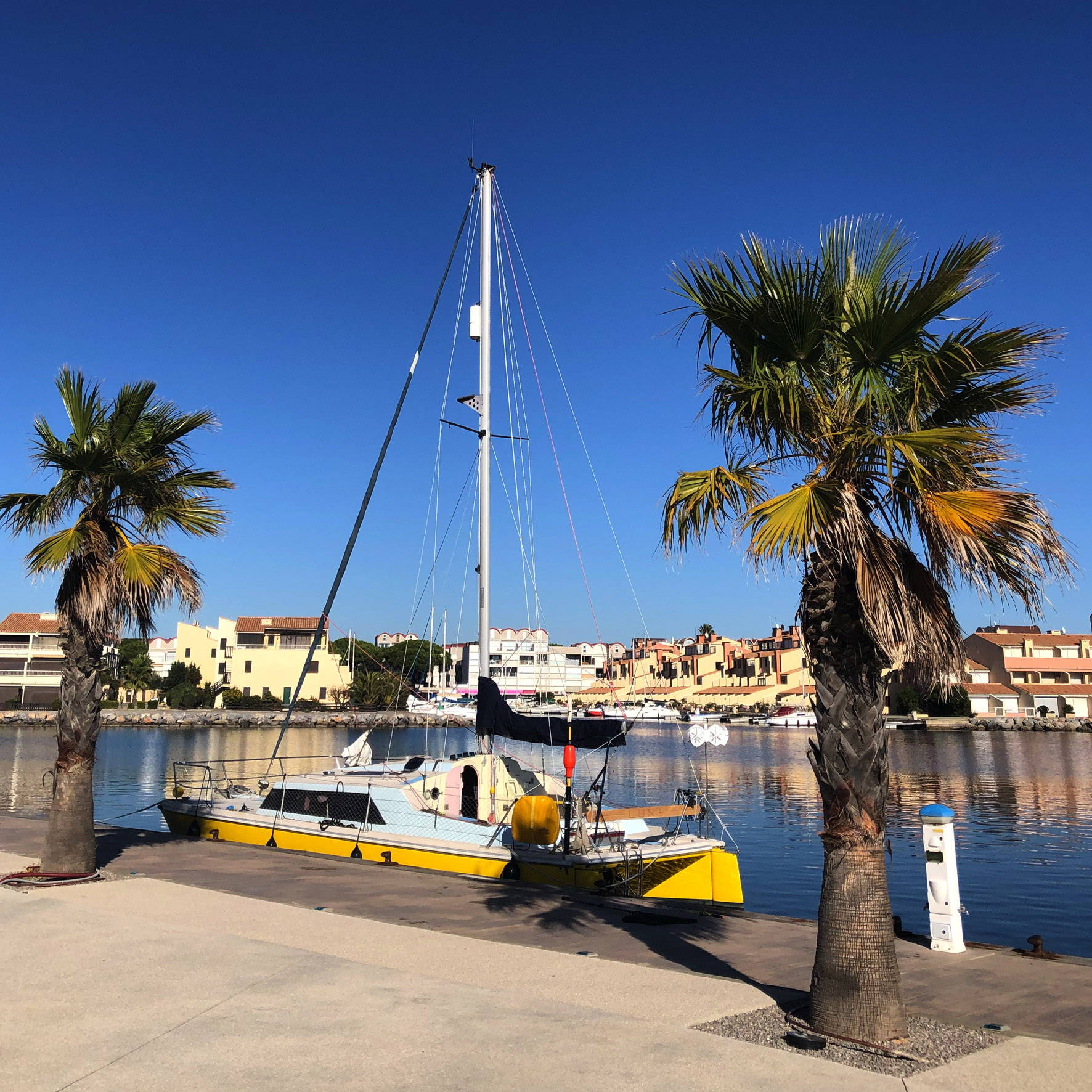 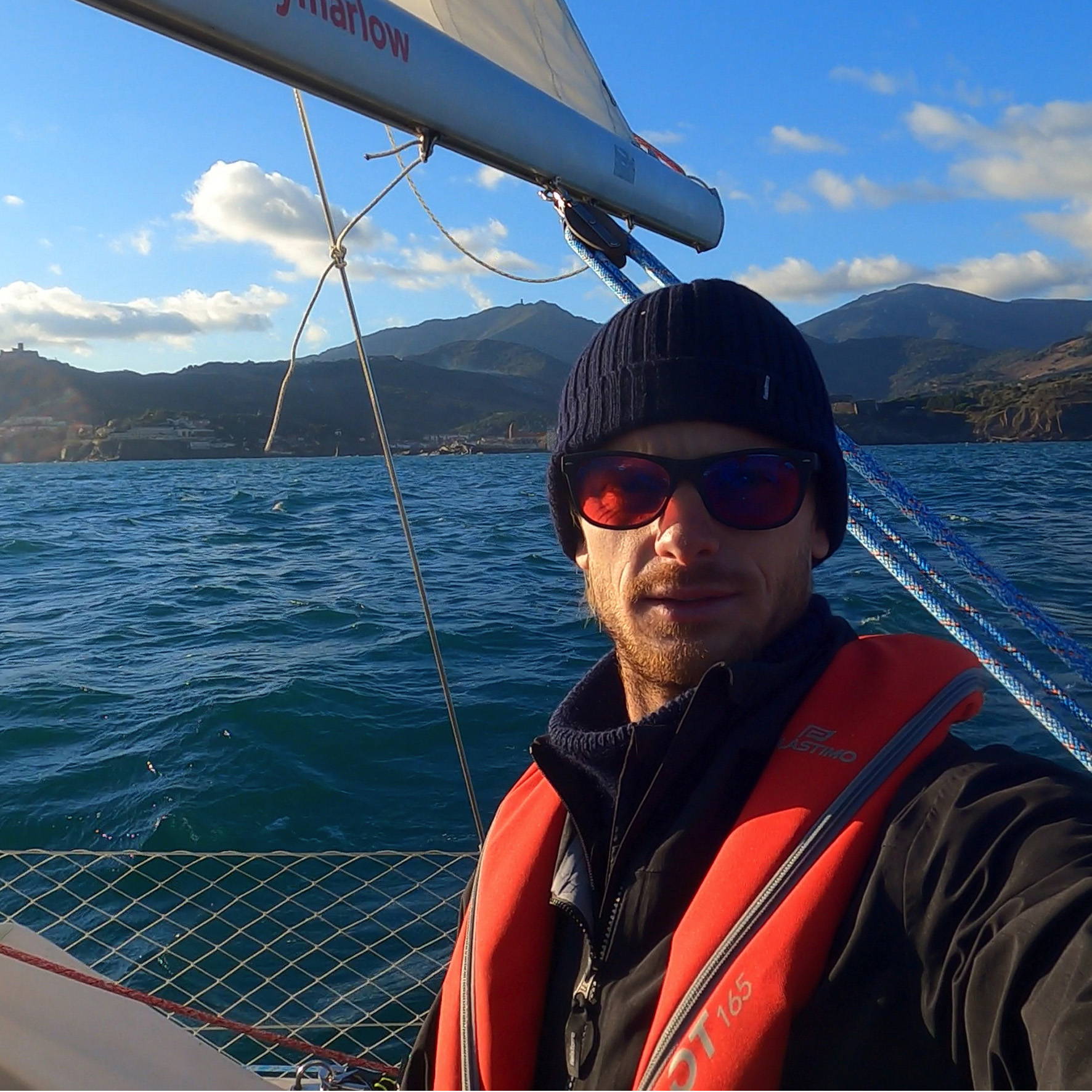 Morning sails with Collioure in the rearview.

After a couple of days of this wind a swell suddenly appeared. It had been blowing 40-knots offshore so the inshore waters had been smooth during the storm, but the surface pressure chart showed a Low in the Gulf of Lion, meaning the air at sea level was moving anti-clockwise around the Low and similar strength winds were blowing offshore in Italy, generating a swell that had travelled across to the French coast. From the viewpoint on Mont St Clair I watched in wonder as beautiful lines rolled in, breaking in a clean left-hander where surfers glided along the faces like little ants far below. The sun was setting and there wasn’t much light left, so I ran down the mountain to get a close look; by the time I got there it was almost dark and the last surfer was coming in, a huge grin on his face. The waves were shoulder height and crisp, held up by a gentle offshore breeze. But the next morning they were gone; like the winds in the Mediterranean, the swell simply switches on and off. To surf here, you have to seize the moment because it won’t last long.

With the swell gone it was safe to leave harbour, so we seized our window of opportunity and said goodbye to Sete, sailing south towards the Pyrenees. With no tides or currents to worry about, passage-making was infinitely easier than in the Atlantic. If the winds were less than 20 knots we would simply leave at first light and sail through the day, pulling into the next harbour before last light. It was a joy not having a time pressure of ‘tide gates’; we could simply enjoy being out on the water and not worry about maintaining a set speed. Luna does not sail fast – averaging 4.5 knots – but as the days passed the miles added up and Mont St Clair slowly faded from view behind us until it was just a gentle haze on the horizon. Ahead, the Pyrenees grew bigger and crisper until we were surrounded by snow-capped mountains dropping straight down into the sea. For the first time on the trip it felt like we had really sailed a long way; this place was a world apart from the boatyard in Hayling Island where we had bought Luna as a wreck and brought her back to life. 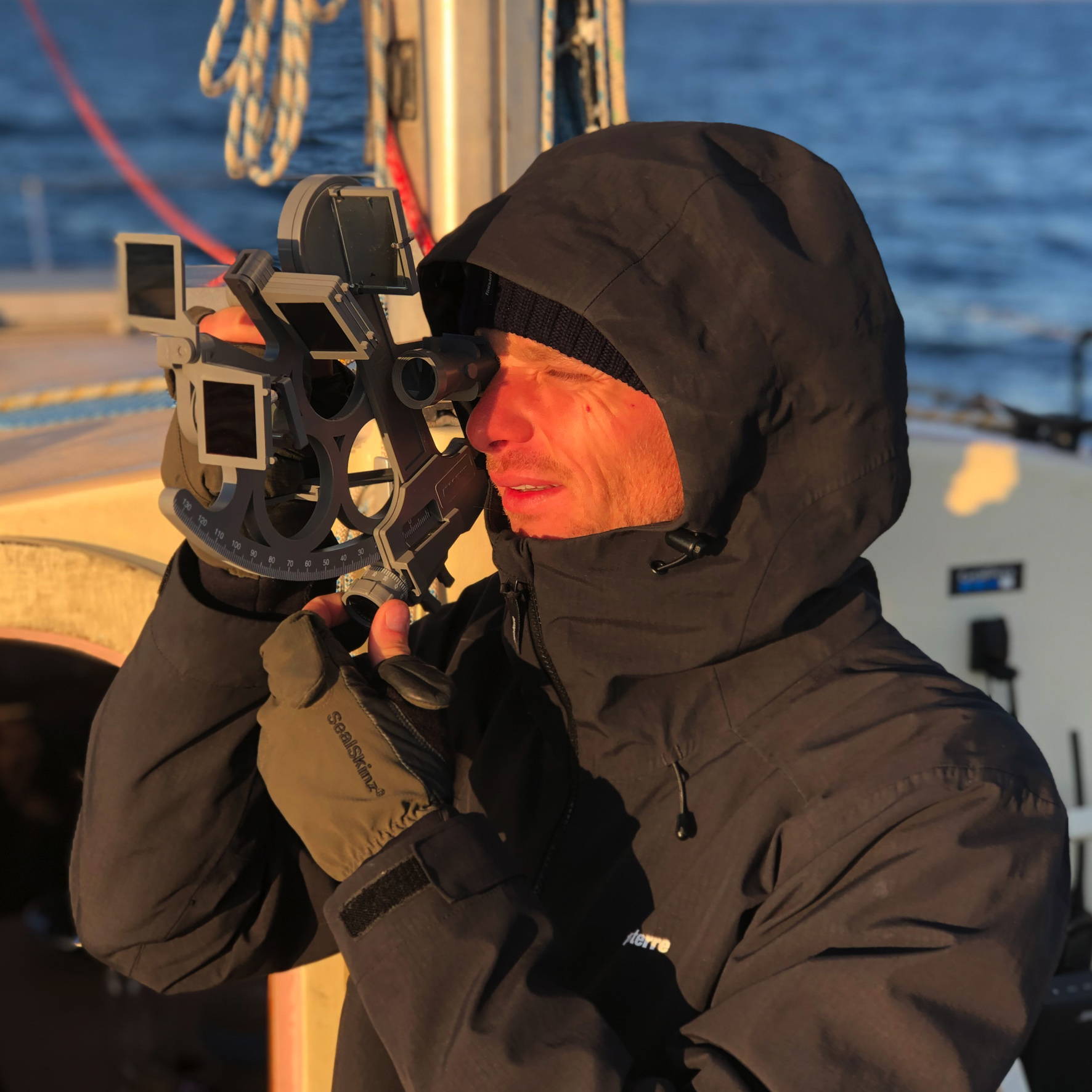 Will uses a sextant in the golden hour. 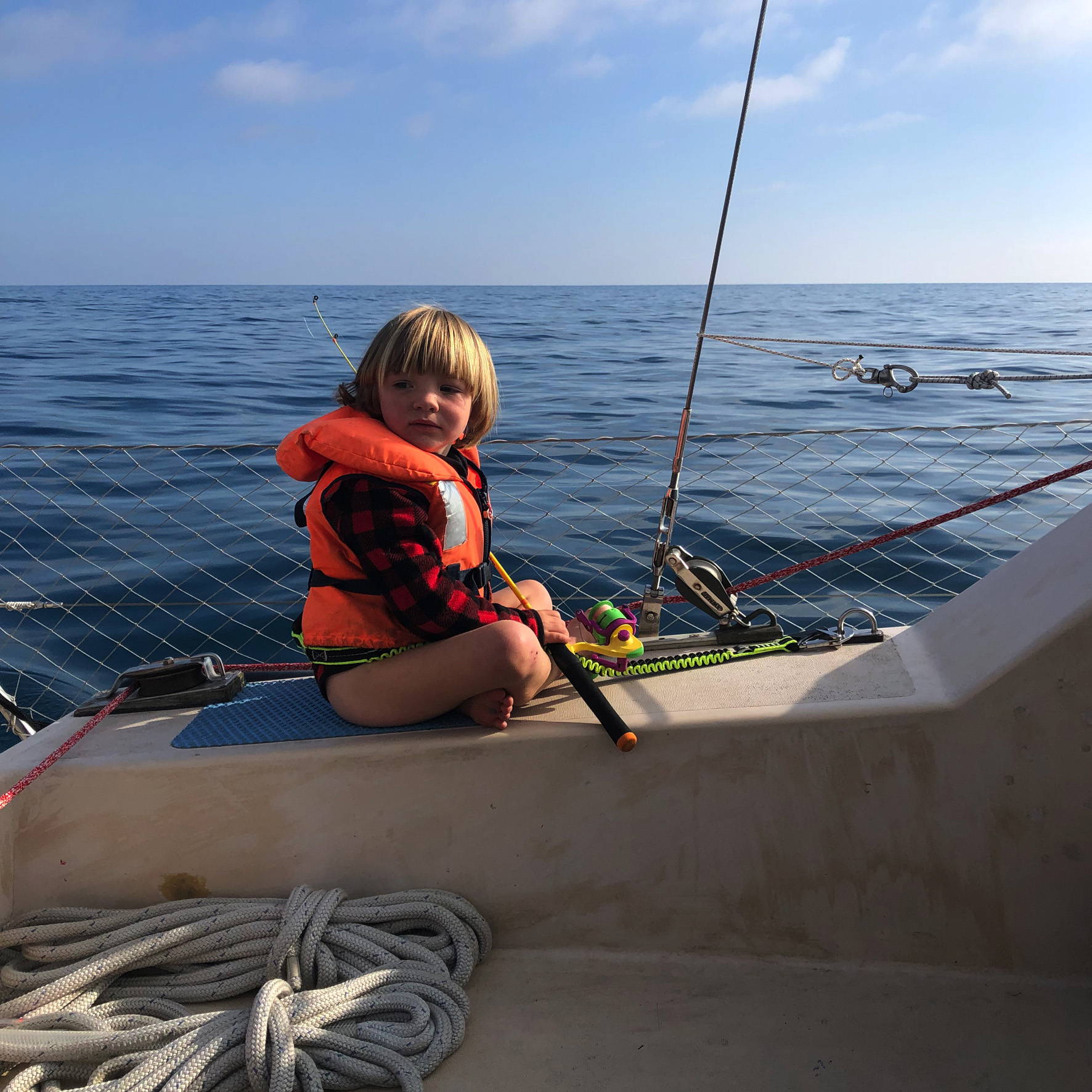 Young Arva fishing off the side of Luna.

The journey had taken its toll though. We had spent a brutally cold winter locked down in Weymouth Harbour and for the past three months we had been packed together into a small boat with little outside social contact, travelling through a foreign country where we only spoke elementary language – enough to get by but not to make new friends and hang out (something we took for granted back in Cornwall). So we resolved to get Luna into the first safe harbour in Catalonia and then take a break from sailing until Spring. But this was easier said than done; it took ten days waiting for stormy seas to pass, made by the ‘Tramontane’ wind that is accelerated along the foothills of the Pyrenees. Finally the wind dropped to 20-knots and we set off around ‘Cape Bear’ into Spain. Although the wind speed was within Luna’s safe limits, it had been 50 knots the day before and there was plenty of energy in the water; it was a wild ride and we bounced around like a bright yellow cork.

A year before it would have scared the living daylights out of me, but after everything we had been through in the past 1,000 nautical miles I had developed a deep trust in Luna. With every passing mile I was learning what she liked and didn’t like, finding a harmony where my role was to simply put up the right amount of sail, set a course and let her do her thing. 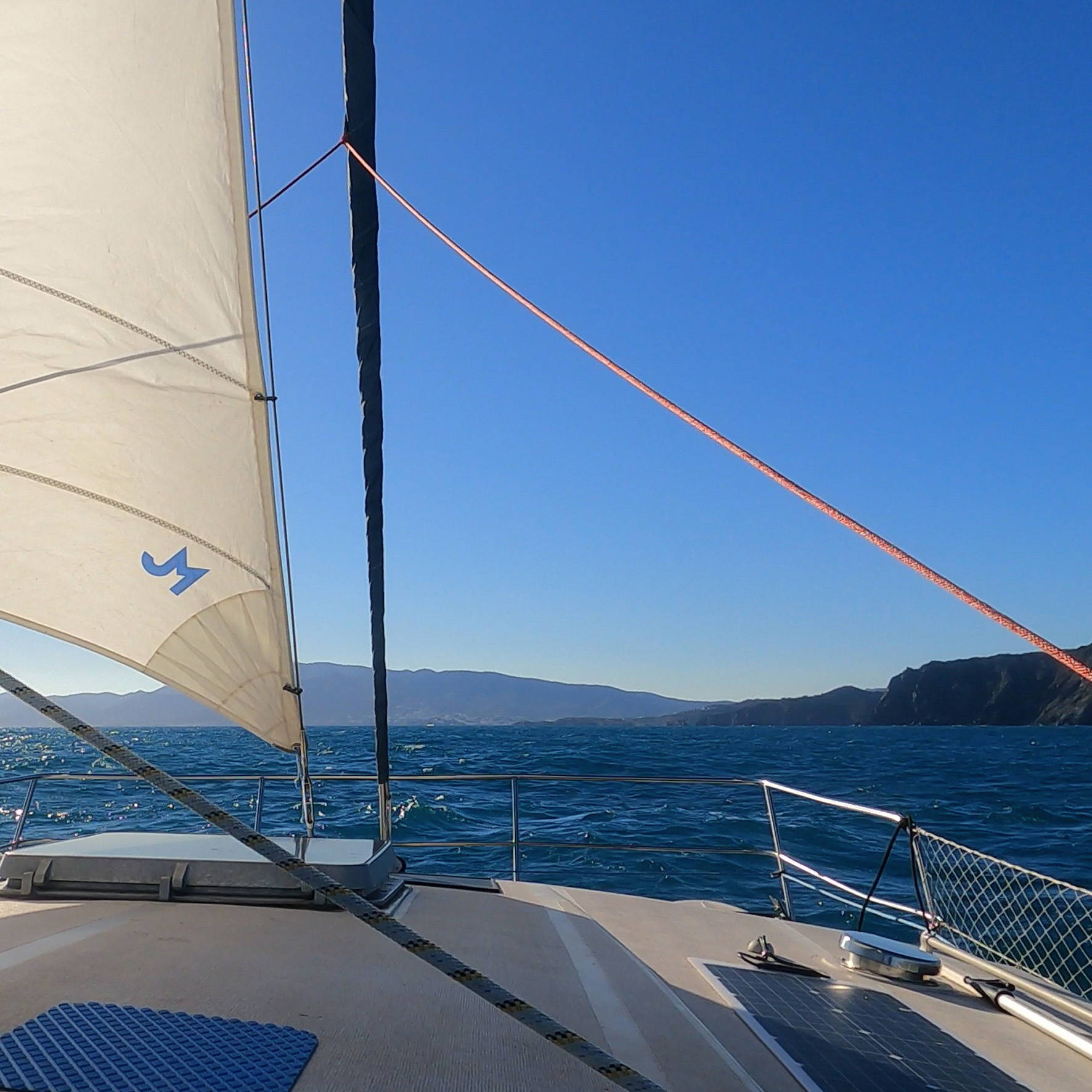 The beautiful blues of the med... 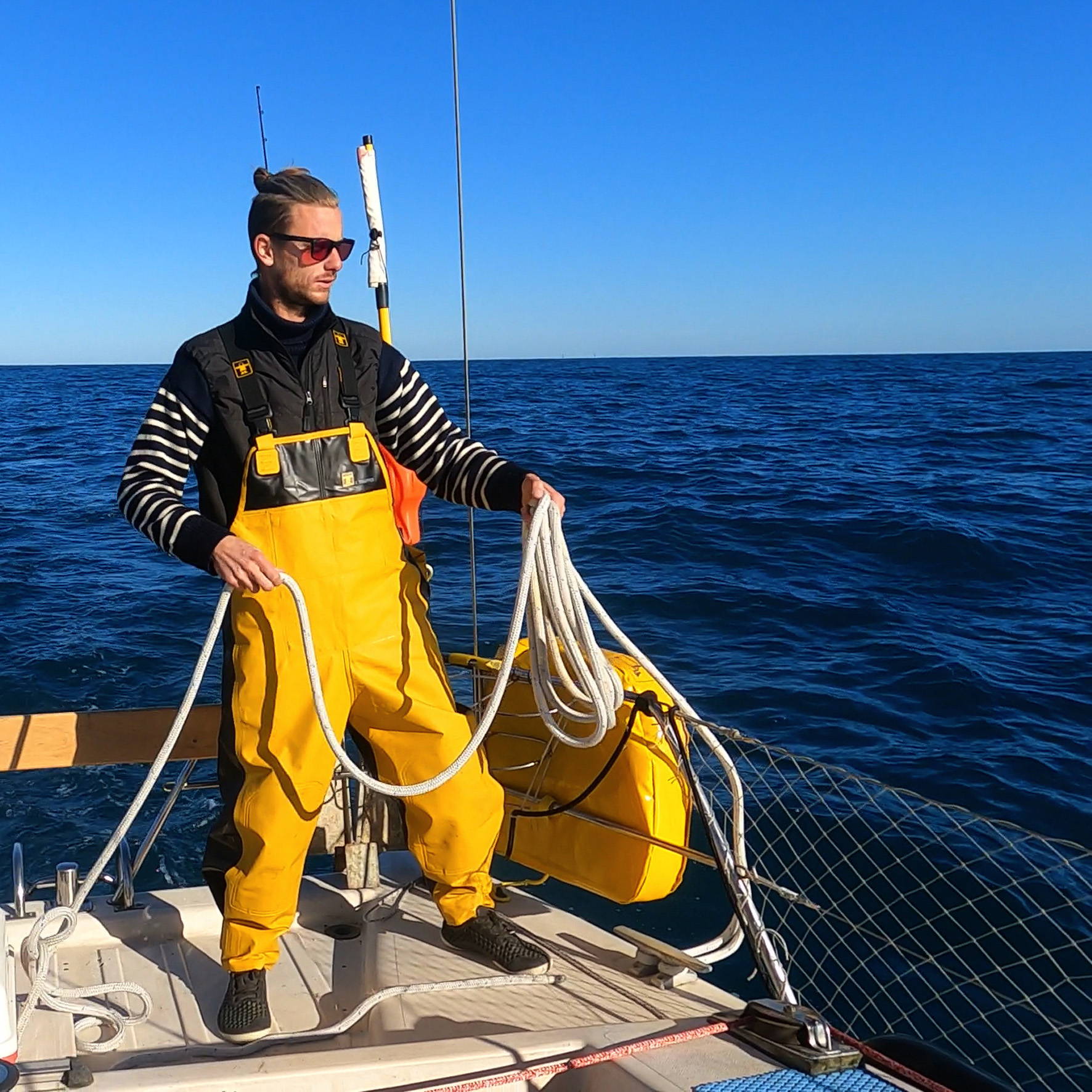 As we rounded Cape Bear, I quickly peered into the cabin just long enough to see Arva sitting cross-legged on the bed, being sick on his lap. There was no denying that conditions inside were uncomfortable, but out in the cockpit it was euphoric. Rugged mountains dropped down to the deep blue sea and waves crashed at their feet, sending sprays of white that illuminated rainbows in the sunlight. A road zig-zagged along the coastline and as I gazed at the cars racing along the tarmac I thought of the days before I sailed, when I would drive along the coast and look out at the boats, wishing I was in one. And now I was. Yes, there is fear, there is danger, there are hardships - but these experiences are what make life memorable. With every passage you grow in confidence, knowledge and skill. Things that used to be difficult become easy. But best of all, when you get somewhere new and tie up on the pontoon, washing off the seasickness and gazing out at the windswept sea, nothing beats the sense of satisfaction that you just sailed there in a small boat.

In the spring of 2022, Luna will be setting sail from Barcelona to Lisbon to carry on her voyage. Departing mid-april, the leg will last roughly a fortnight (depending on winds).

If you’d like the opportunity to join them, you can apply to be crew by sending a DM to Will on the Tide School Instagram.