The Broadcast / Bears In The Blue Pt. 1

Pushing his skills as a wildlife photographer, his body and equipment to the limit, William Fortescue joins a team of researchers on an expedition into the Arctic Circle, to look for one of the most elusive land mammals left on the planet… 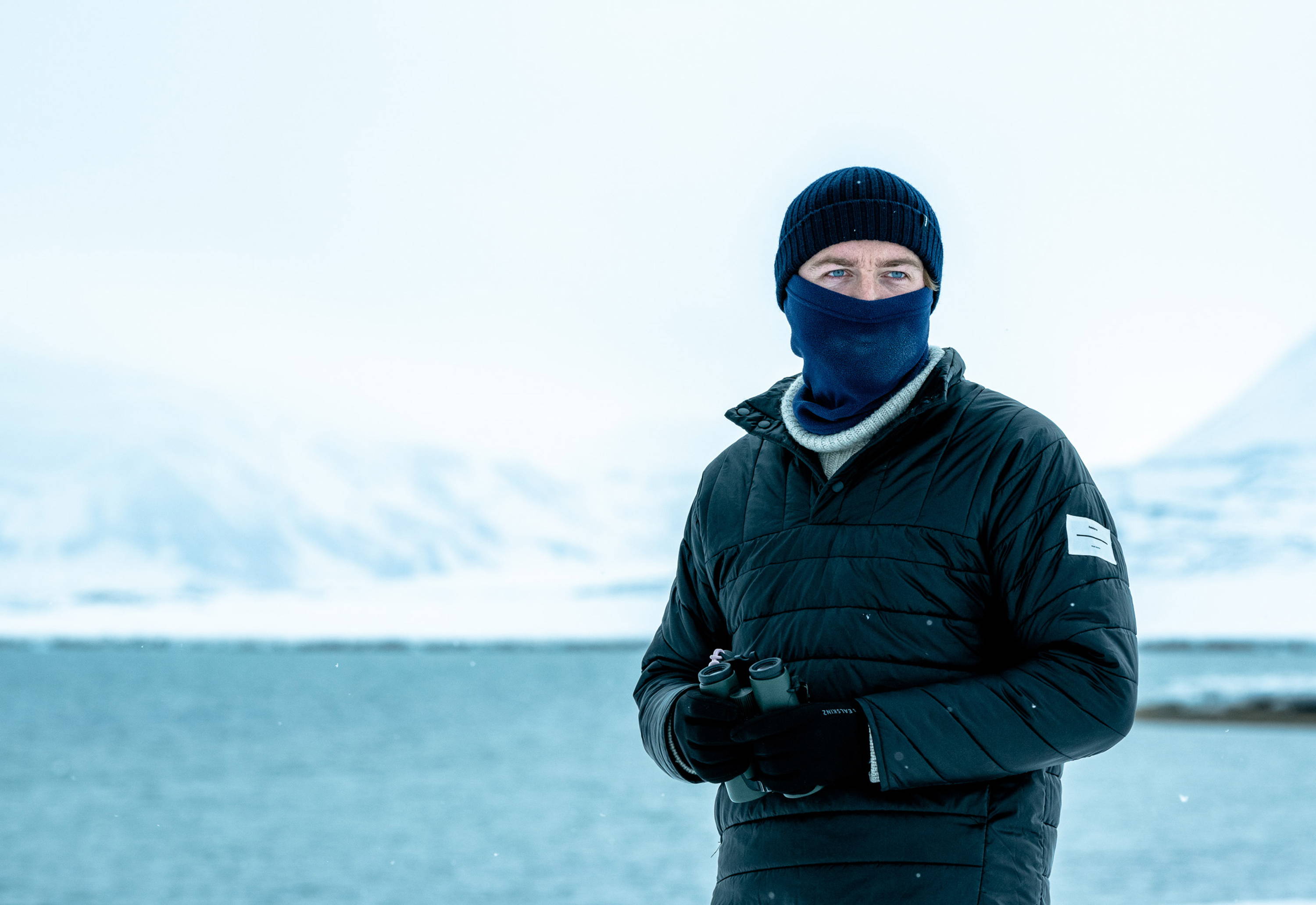 The clock has just ticked past 2am. It’s -12°C and I’m sat in a small inflatable boat, in the middle of the Arctic Circle. The sun has not set for 12 days, and won’t for another three months - the season of the midnight sun has just begun.

I am here looking for polar bears, and have been for six days.

The pinnacle of Arctic wildlife, polar bears fascinate many by their reputation alone. Be it their ability to survive extreme temperatures, phenomenal hunting skills (driven by an unrivalled sense of smell) or perhaps their status as the largest land predator in the world – there is so much to admire about these kings of the north.

As a wildlife photographer, these animals have been top of my bucket list since I first picked up a camera. It is not just the animals themselves, formidable though they are, but the very environment in which they live, that I find so enticing. 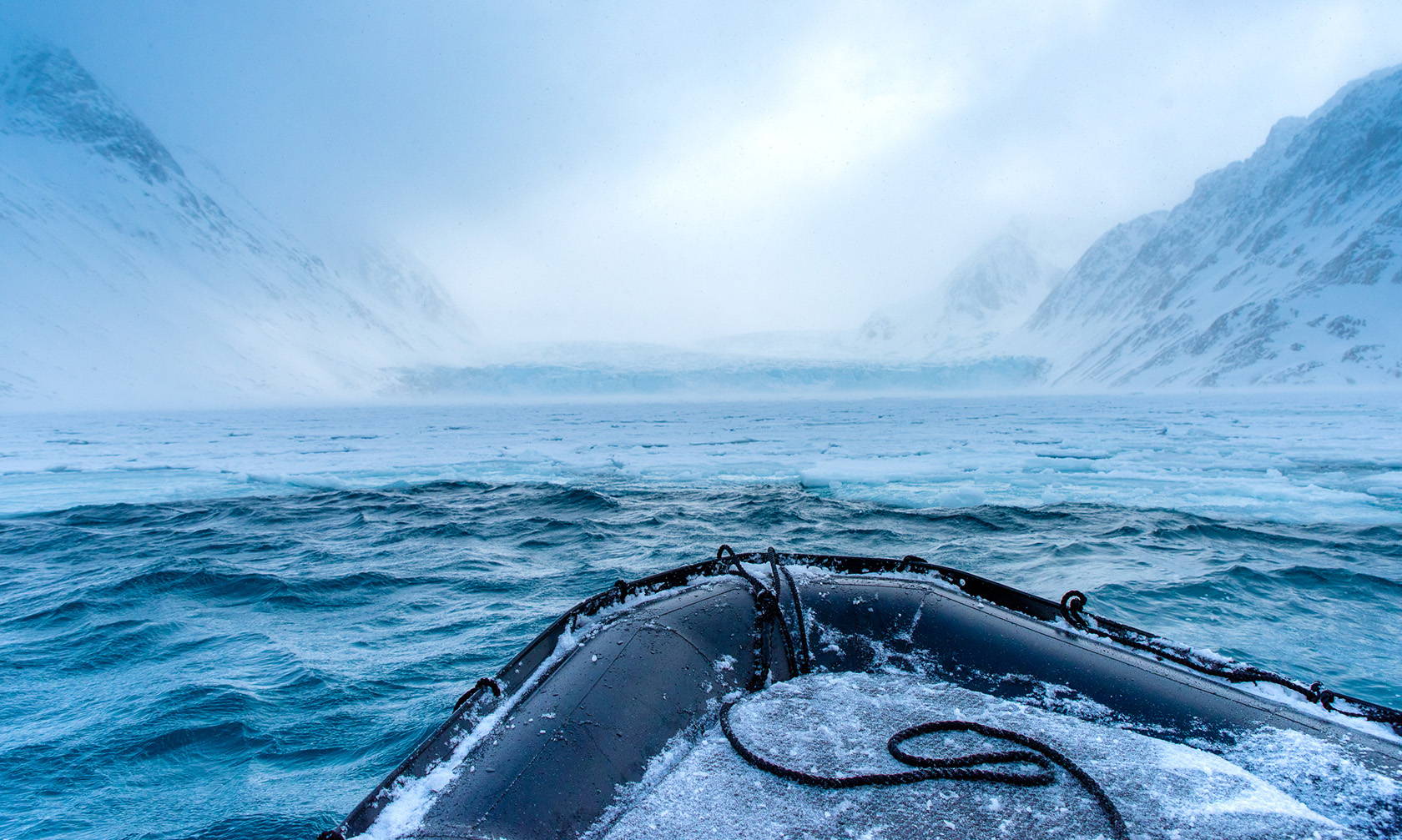 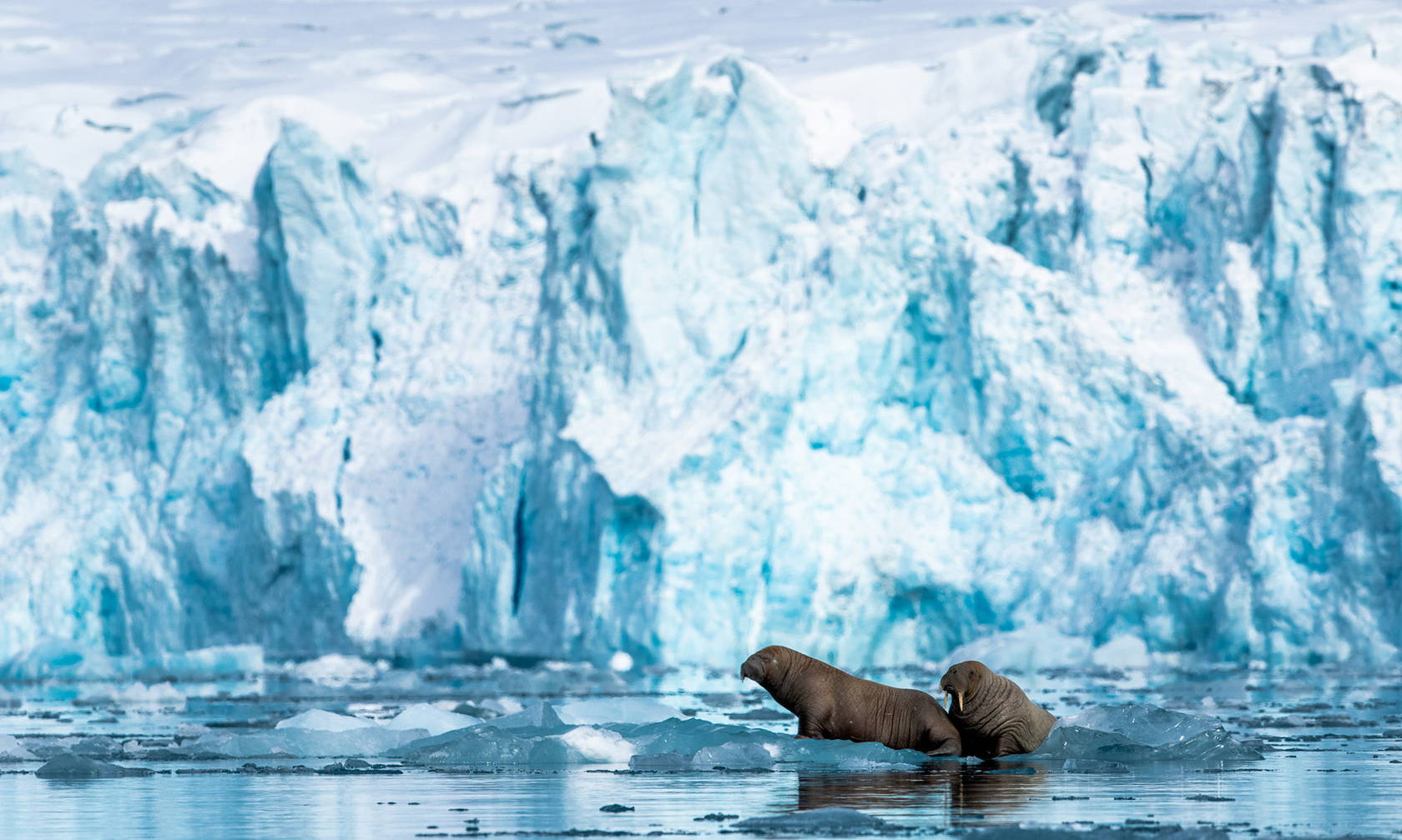 Having never really seen ‘proper snow’, apart from when standing atop Mt. Kilimanjaro almost a decade ago, the Arctic Circle was going to be wild, new territory for me. Given I try to portray as much of my subjects' environment in my images as possible, working in such a dramatic landscape was an exciting proposition.

Six days before I found myself in that zodiac boat at 2 am, I was flying in to Longyearbyen, the northernmost city in the world. I’d left London just a few hours earlier and, via a short stop in Oslo airport, was now flying towards the very top of the world.

Nothing could have prepared me for my first view of Svalbard - the Norwegian archipelago I was due to spend the next ten days exploring. Miles of snow covered mountains rose vertically out of the sea, waves lapping at the ice covered shore line. It was the first time I felt like I was truly entering an area rarely touched by our heavy handed, human footprint.

Upon landing, on a runway surrounded by snow, we were greeted by the welcome announcement from our captain, “Welcome to Svalbard, the outdoor temperature is -10°C”, prompting a scramble down the aisle as everyone threw on roll necks, scarves, beanies and any other woollen clothing within reach. All of which would stay on almost 24/7 for the next week and a half 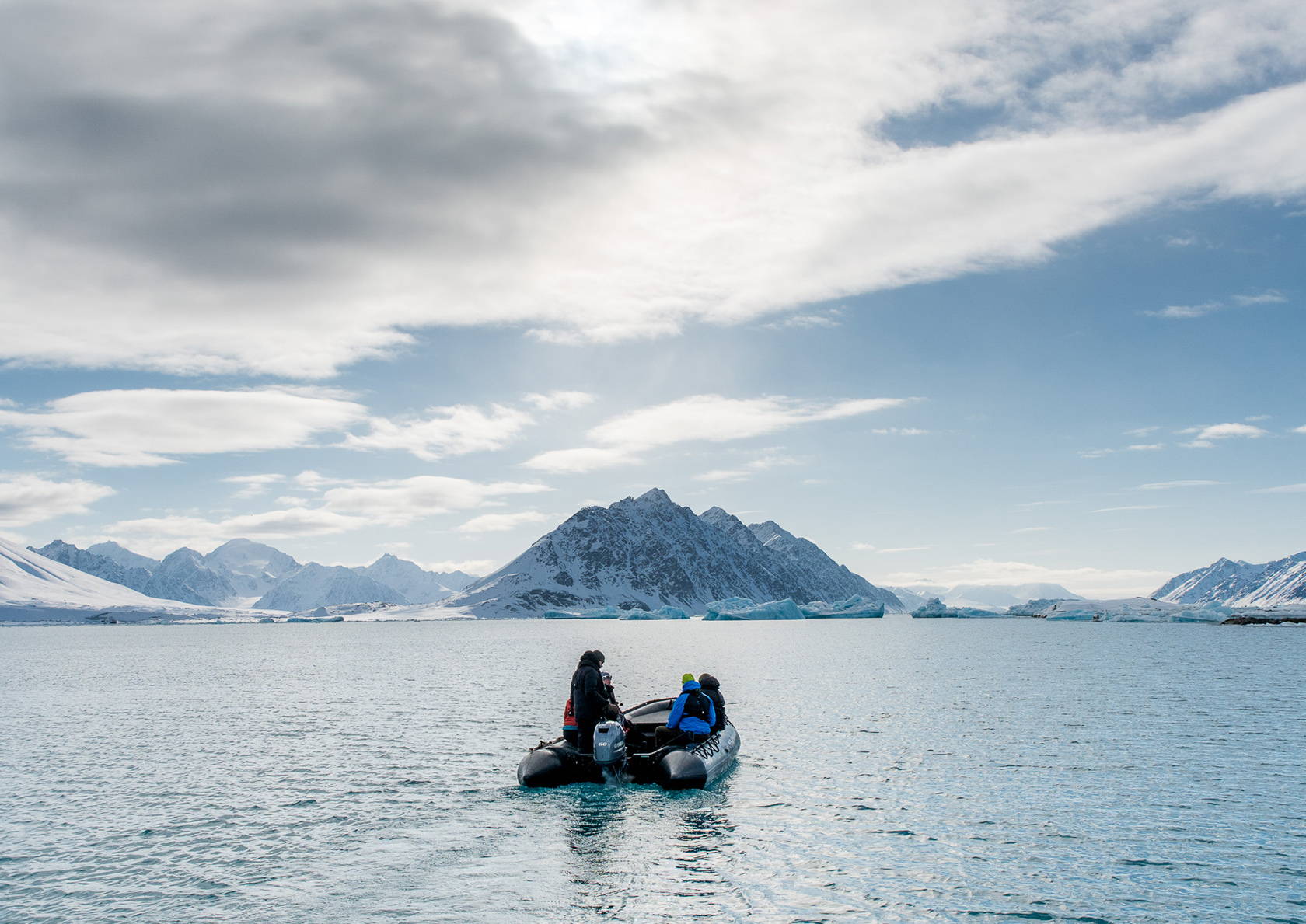 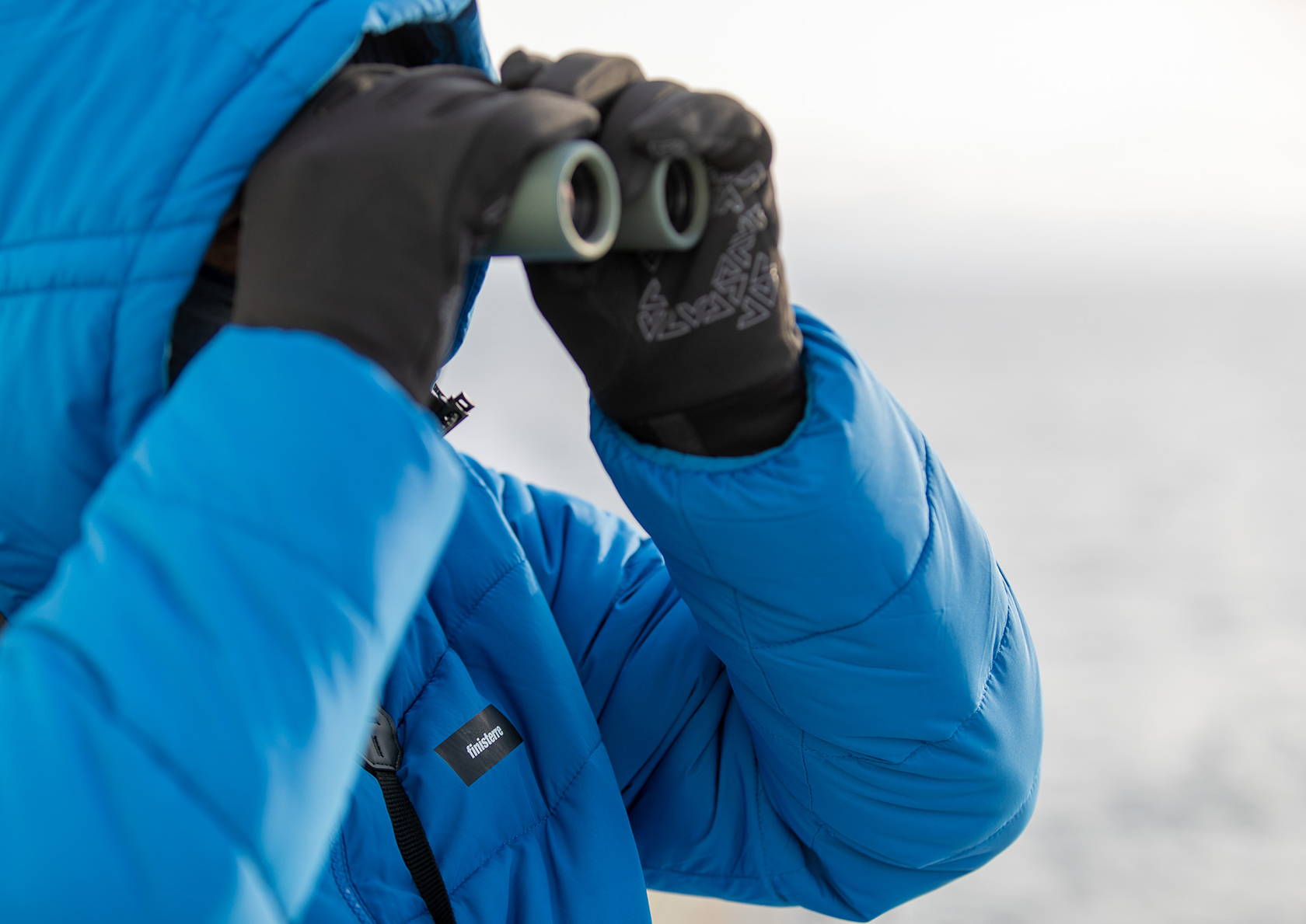 For two days I explored Longyearbyen, visiting the northernmost pub and church in the world (and spending a lot more time in one than the other), where even the pint glasses had polar bears on, until it was time to board my home for the next week; the MV Villa. Built originally as a fishing vessel, but now adapted to carry eager explorers around one of the most remote corners of the world, she came equipped with two zodiacs and a brilliant crew, all of whom were seasoned Arctic veterans.

Sailing out of Longyearbyen, we said goodbye to civilisation, phone signal, wifi and anything else tying us to the modern world we have become so accustomed to. In a refreshing change of pace, life here is at the mercy of the elements. Our first night was spent sailing as far north as the ice would allow us to. Reaching 79° north before the way ahead was finally too frozen to breach.

Eager to get our first taste of life out on the water, the crew cleared the ice off the zodiacs and dropped them in to the water - a process that takes about half an hour - while the rest of us donned as much cold weather gear as was possible.

Visibility was hampered by fog, and a gentle wind mixed with choppy seas to make photography extremely difficult. Were we to see a bear, I’d have had to lie across the front of the zodiac, bobbing up and down, trying to keep my hands from shaking in the cold as they fumbled around the camera. 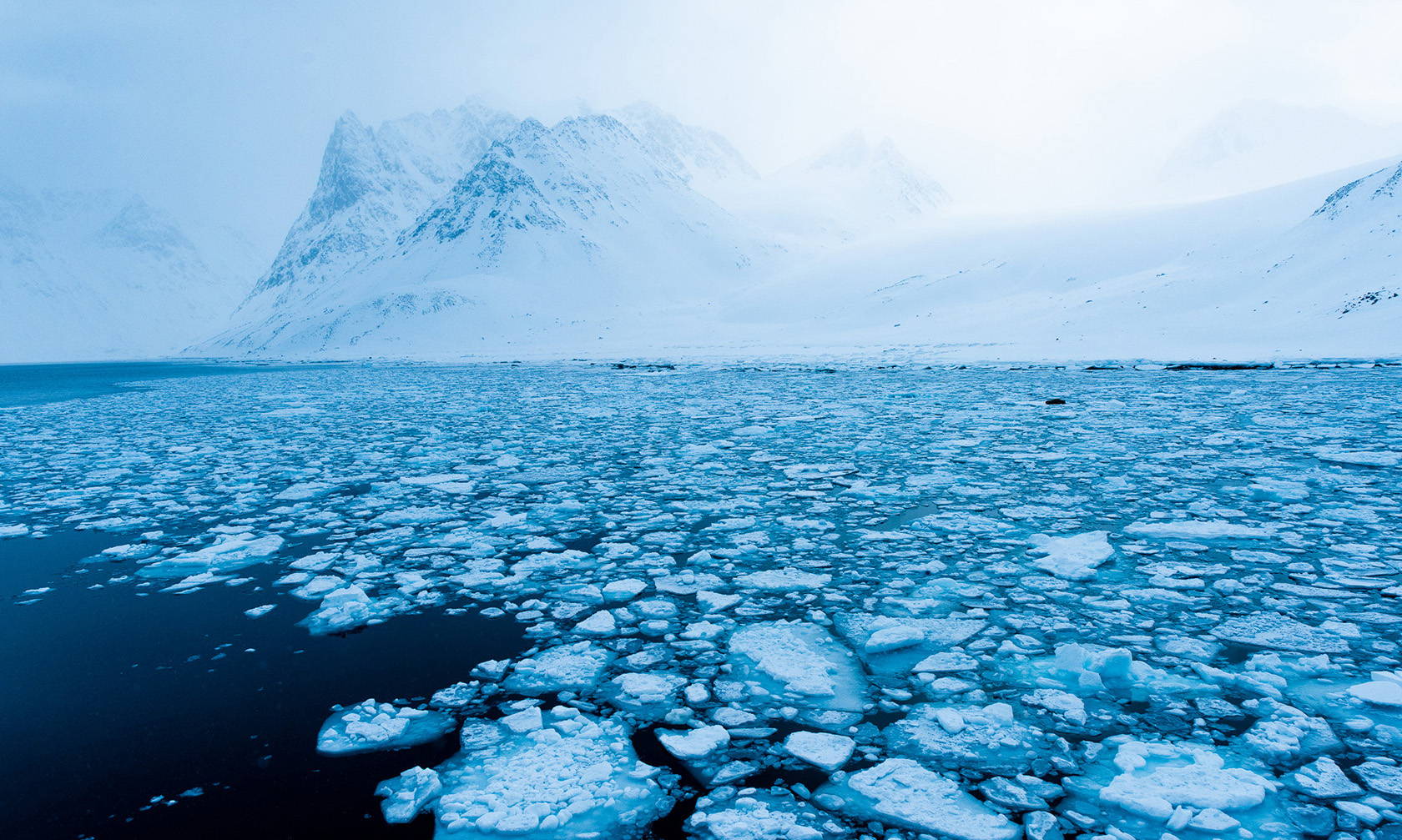 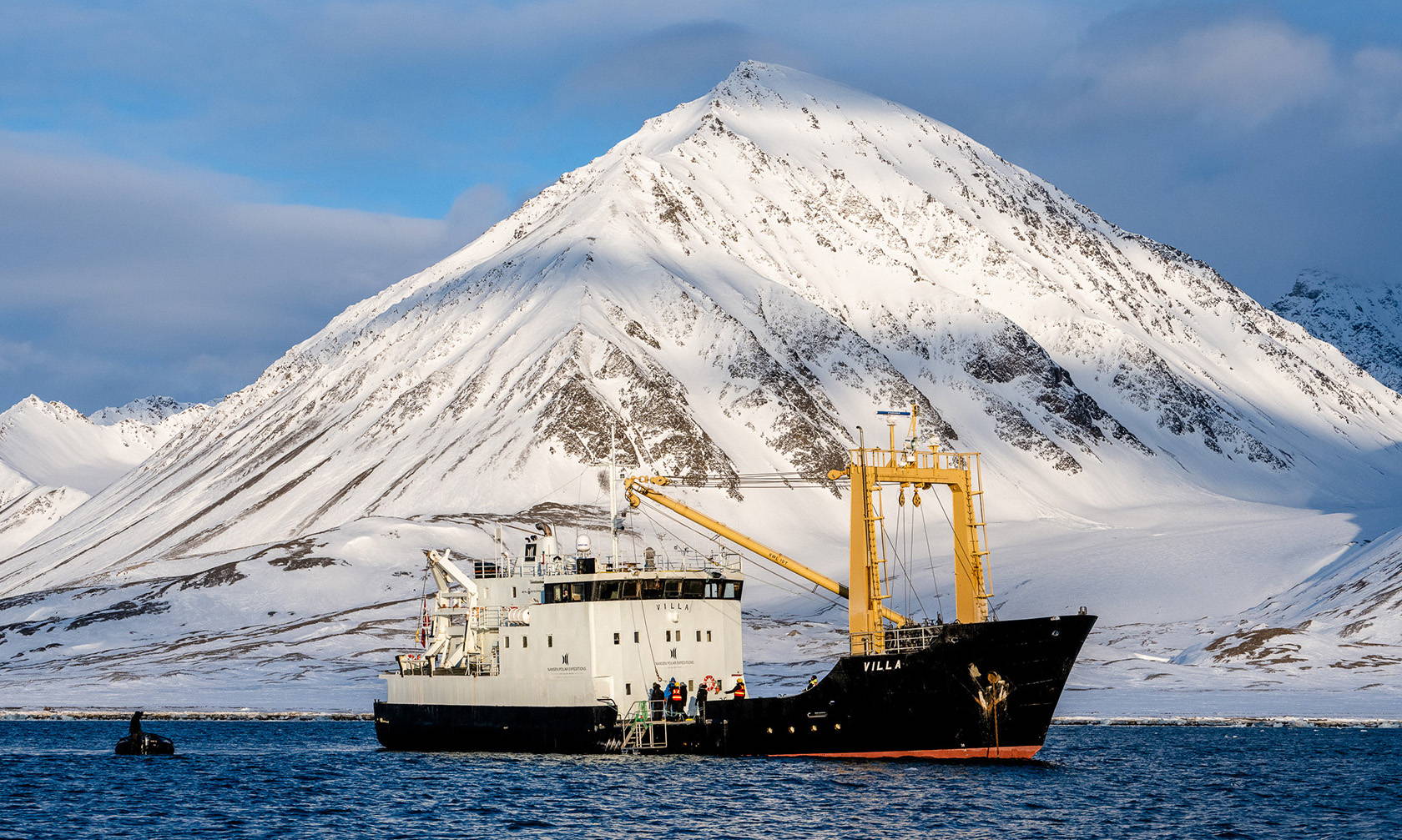 As it transpired, no bears were spotted. But in the knowledge we may only see one in the week long expedition, this was no real surprise. Instead, we were treated to sightings of walrus, harp seals, king eider birds and northern fulmars, and our first view of a glacier bigger than most towns.

It was a great taste of what was to come that week. Spending hours out on zodiacs, binoculars or camera in hand, at any time of the day or night as we made the most of the 24 hour daylight.

Each day bought with it a new opportunity, either in the form of a new fjord, all of which book ended with a glacier, or new wildlife sightings - we saw walrus and reindeer almost every day, arctic fox, three species of seal, a great variety of bird species but for six days still, no polar bear. 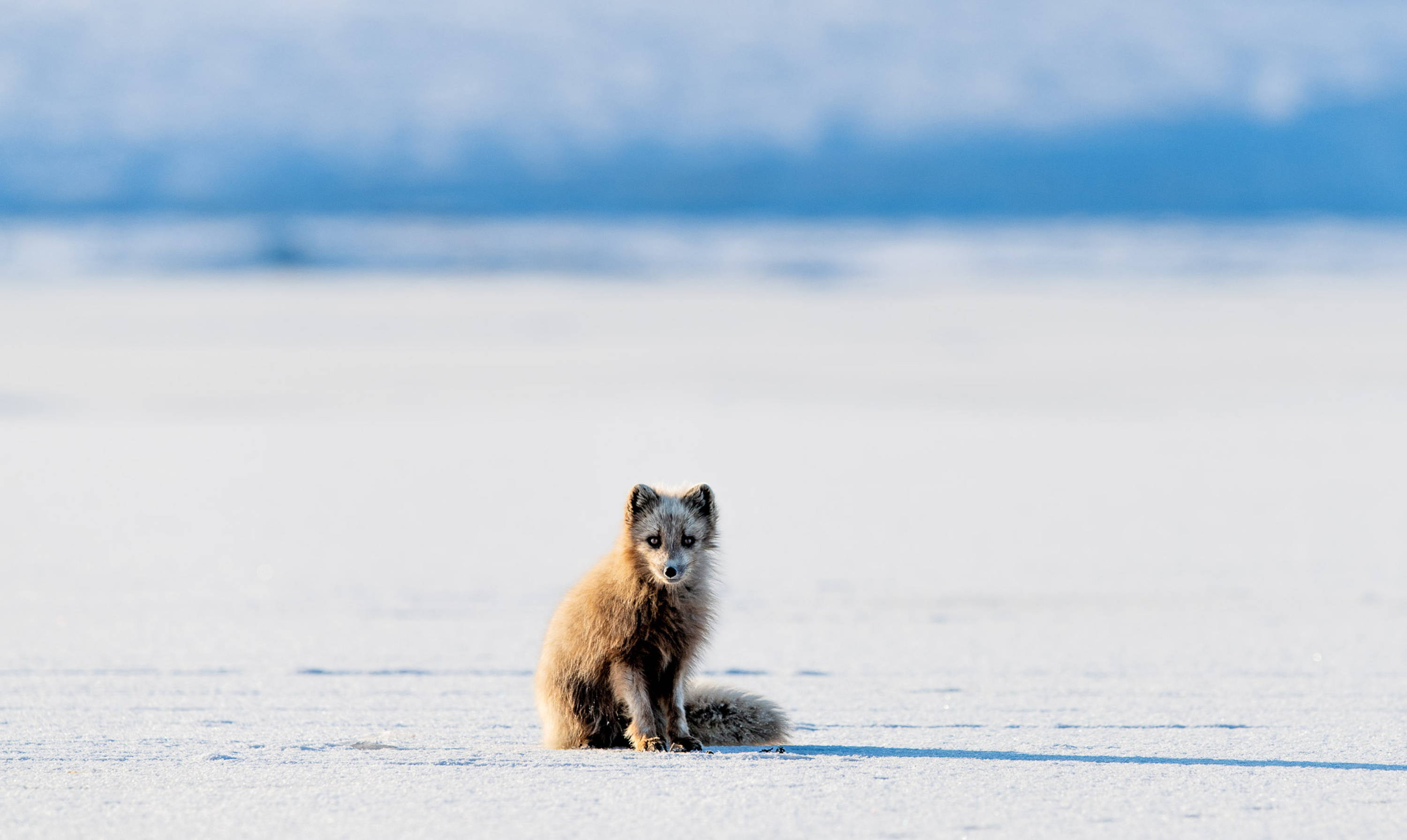 Every day that passed, our search intensified. Spending hours on the bridge of the boat, scouring the blanket of white for a small, yellow spec with our binoculars. Finding a needle in a haystack would have been child’s play in comparison.

The views, while intensely beautiful, failed to yield a single bear. At least not one that we could see. On our final night on board, and with hopes starting to fade, luck finally changed.

First we saw a lone bear, initially asleep, before crossing the far side of the fast ice, perhaps 100 metres away, and headed towards a glacier. It was a sighting worth celebrating, and so the team returned to the boat, opened some champagne, and set about the celebrations - which included a quick ‘polar plunge’ - diving in to -2°C water, before realising what a stupid idea it was and getting out again pretty quickly, only to be treated to an air temperature of -10.5°C, soaking wet in nothing but your boxers. My hair froze as fast as I had just sunk. 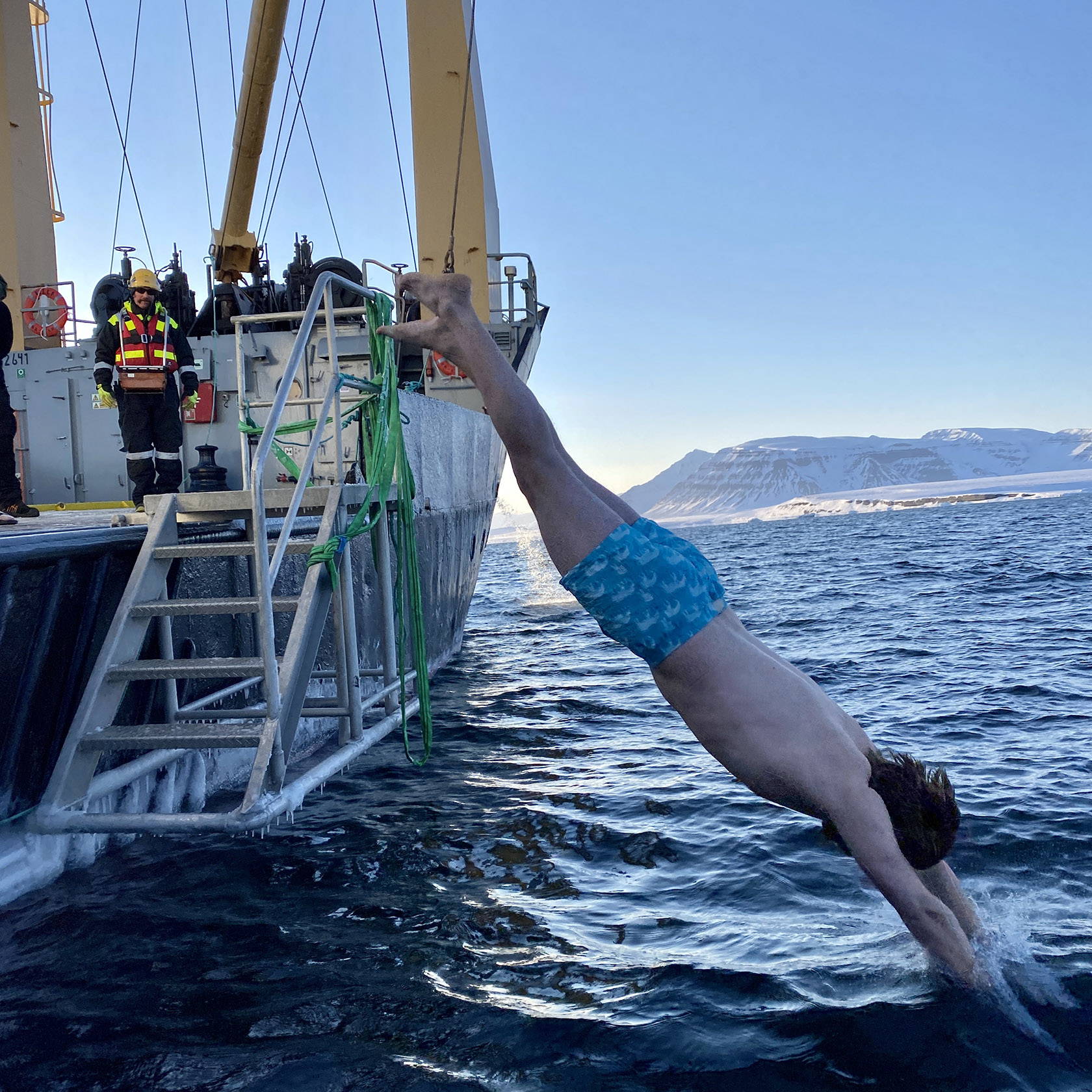 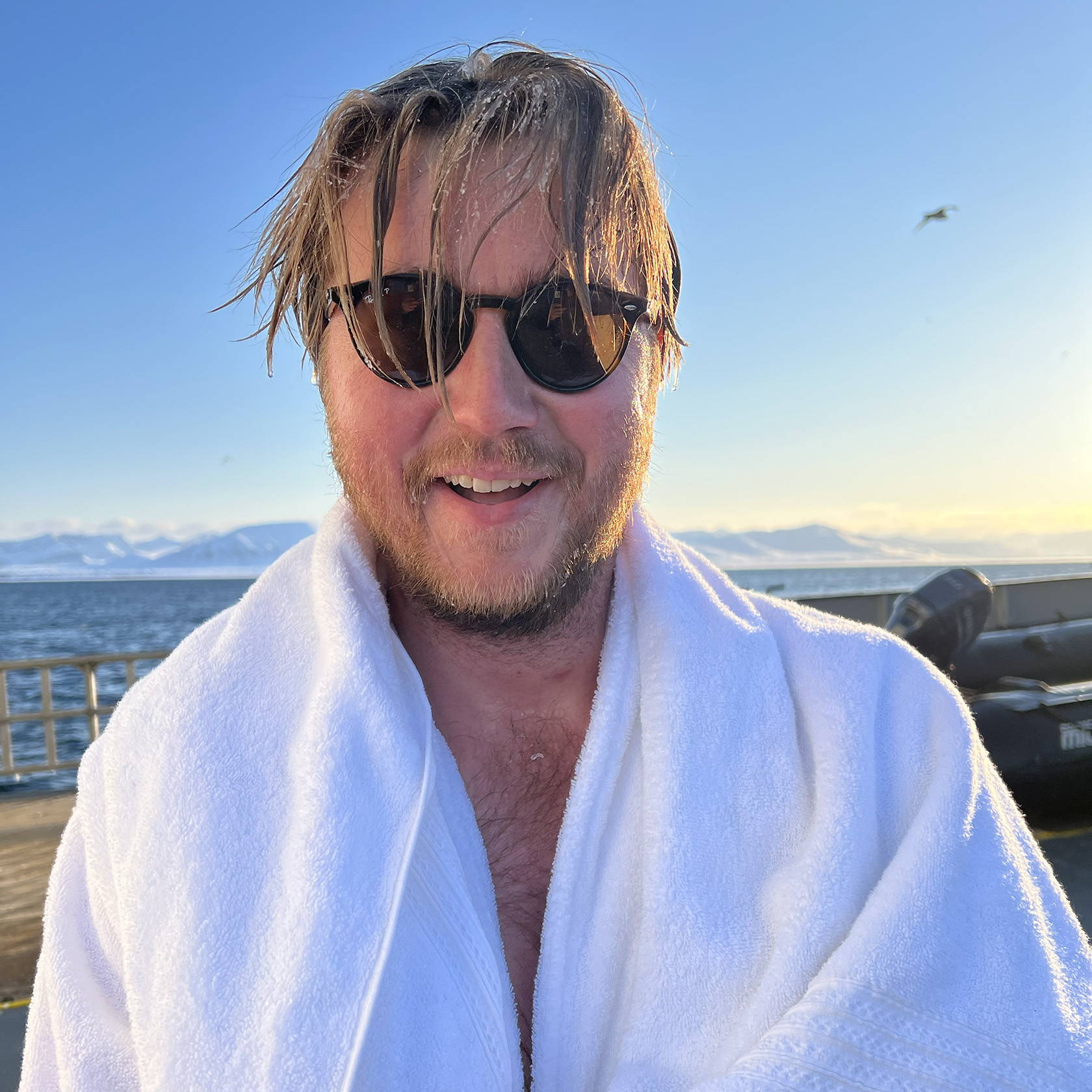 Come 1am, as many of us were still enjoying the party (and trying to warm up), a tentative call of “I think I can see another bear”, came from Moira - one of our ridiculously eagle-eyed expedition leaders. Except it was not just one, it was three. A male was chasing a female and her cub, we assumed in a bid to mate…

With bears finally in sight for the team, keep an eye out for the second and concluding instalment in the coming weeks.