The Broadcast / The Bench At Wilyabrup

The Bench At Wilyabrup

In this ever changing world, continuity and permanence are difficult to find. Whilst exploring his newly adopted home of West Australia, writer and surfer Pete Geall found one such place away from the crowds. A simple but well placed bench, seemingly unchanging, perched high above the wild coastline of Margaret River.

Words and Images by Pete Geall 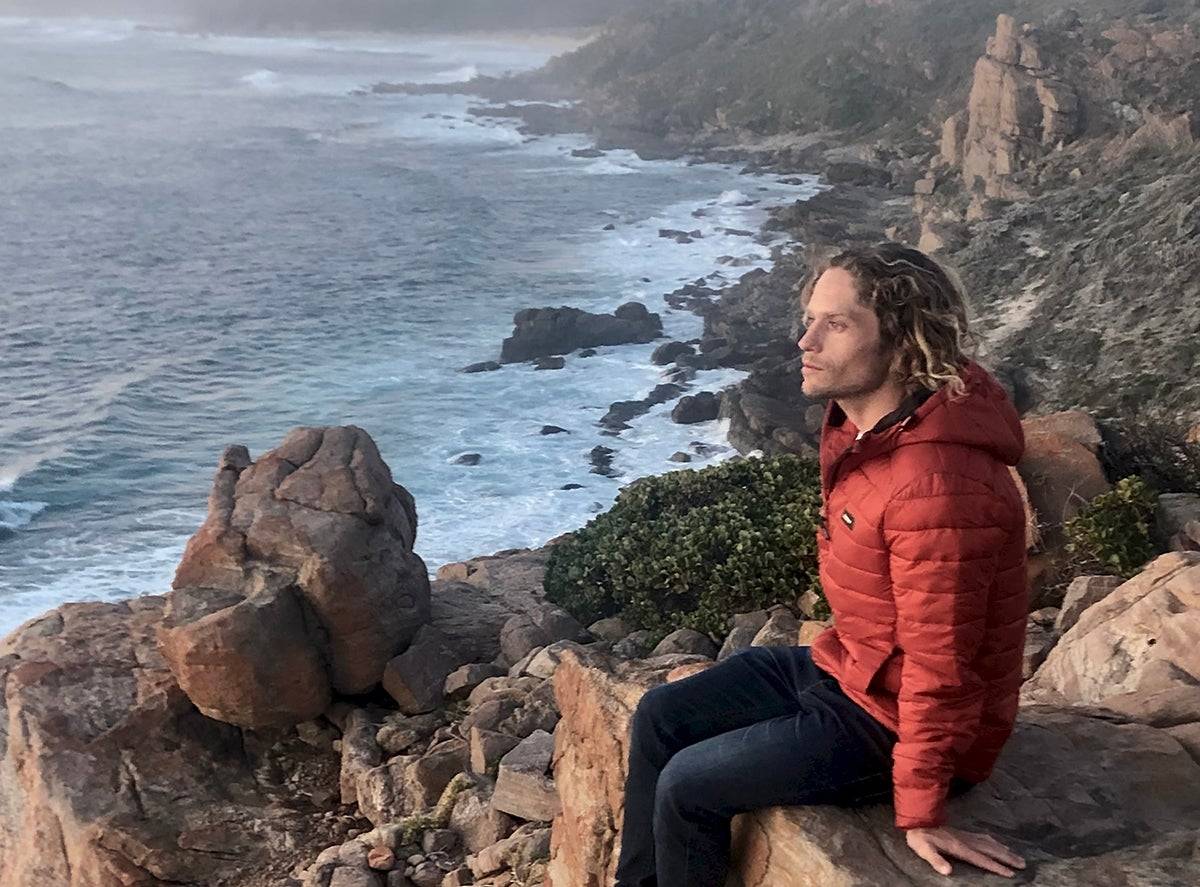 There isn’t much high ground in Western Australia, geological process over a timeframe hard to comprehend has worn most hilltops into nubs of their former selves. The coastal cliffs near my home in Wilyabrup are no exception. Despite their modest height, they offer a panoramic view of the untamed and exposed Indian Ocean coastline below. Composed of a type of metamorphic granite called ‘Gneiss’, they have a reassuring solidity underfoot when compared to the crumbling limestone ridge that runs along the coast either side.

Wilyabrup is situated three hours drive south of the State’s capital in Perth, in the heart of the Margaret River wine region. Tourism, vineyards and surfing are the big hitters round these parts. The long Mediterranean summers and short, tumultuous winters have their hard edges softened by the presence of the mild, maritime air. It is telling that the moderating force is also a wild force. This remote corner of the Indian Ocean is bound in an intensity of energies that rarely loosen their grip for long. During the winter, whales migrate north to calve before passing again in spring on their return. Throughout, the cliffs stand unblinking sentinel to the marching beat of nature.

“My favourite thing about the bench is it never changes, but everything is changing so fast around it.”

Someone had the good sense to place a wooden bench overlooking the scene. The bench is raised onto a platform of decking and installed on the track that runs horizontally to the cliffs. I can slump into it and with my feet on the wooden slats in front become suspended in a supremely comfortable place. The southwest winds that plague the coast are satisfyingly deflected overhead. On sunny days the enthusiastic calls of climbers are transported in the onshore wind as they take on the numerous routes up the rock face. Their dusty ropes dance squeakily through metal D-rings drilled deep into the rock. The setup has been over engineered in a way that makes me give thanks to the vision of those who created it. 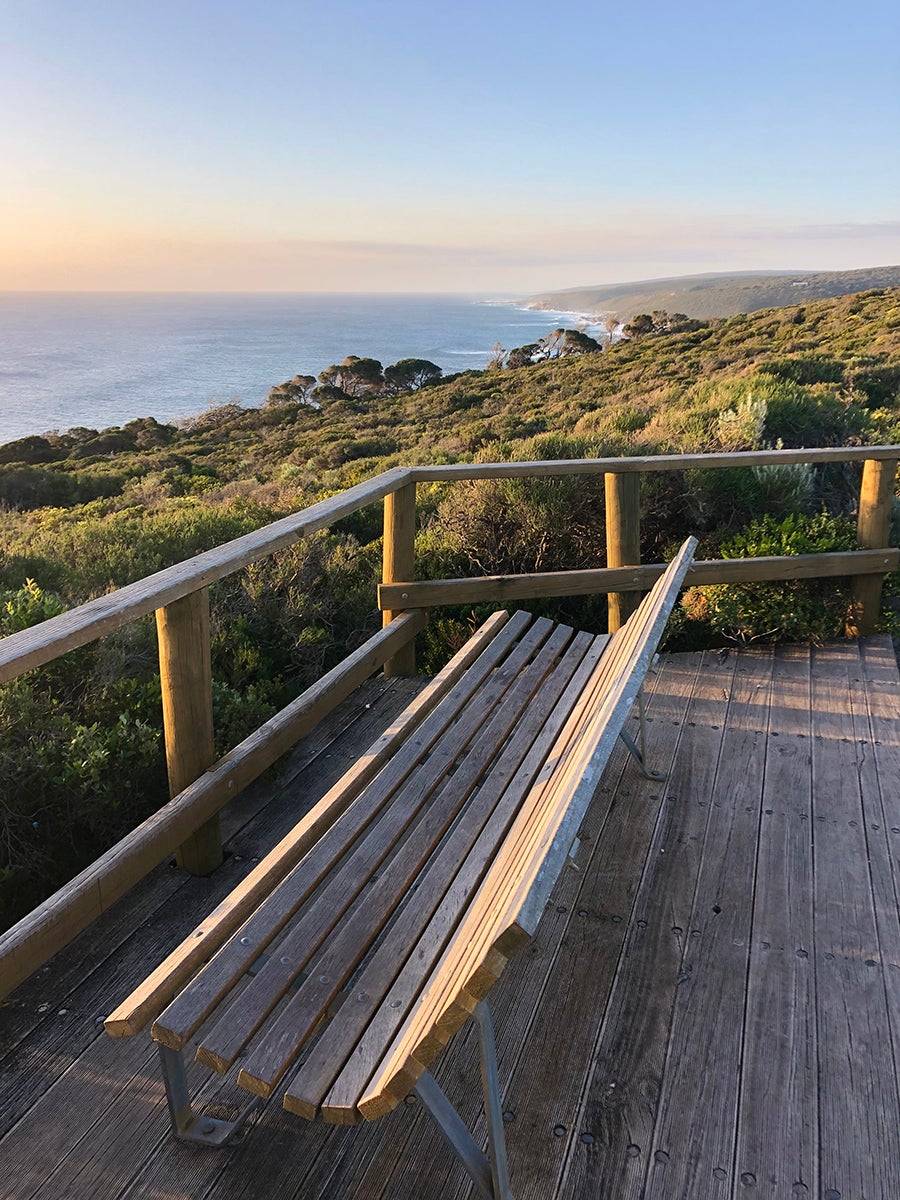 The bench is positioned on the ‘Cape to Cape’ track, a hike that starts on the Southern Ocean in Cape Leeuwin before meandering some 130km through national park until it reaches Cape Naturaliste in the north. Six years ago I hiked it alone. Surfing along the way, free camping on the beaches and cheerily consuming packet noodles I had strategically stashed in the bush. Every time I sit here I feel a nostalgia for the spirit that swept me along the trail. The physical challenges of heat, wind and heavily laden pack easily overcome by the possession of a singular, purposeful goal. I’ve realised that sometime between then and now I had crossed the line that inevitably separates us all from the innocence of our youthful adventures. It feels self-indulgent to reflect on when that moment was crossed or whether it is a line at all. Perhaps perspective is the consolation prize that comes with age? You can’t have both, I know that.

There are about seventy to eighty surf spots between the two Capes. Depends on who you ask. Many people like to surf an ever revolving list, others are content to stick with their individual, personal zone. Surfing has been woven into the modern story of Margaret River since the 50s. Even the petrol stations sell surf wax and leashes. I’ve discovered that knowing when to zig when others zag is key to scoring uncrowded surf. From the the bench I can check a trio of ominously named surf spots to the south: Hangmans, Gallows and Guillotines. To the north, the Melaleuca lined valley of Quinninup has been a place of cultural significance to the indigenous Wadandi people for well over 17,000 years. I wonder if people will still be surfing here in 17,000 years?

My favourite thing about the bench is it never changes, but everything is changing so fast around it. The wind, the waves, the sounds. Between it all I can grasp onto the things I understand, like the swell size or wind direction and get frequently mystified by the things I don’t. The unfamiliar noises. The hidden history. The seemingly random times in which things flower.

Western-Grey Kangaroos live amongst the bush. Their ears poking up above the flora give them away. Ears that hone in on you, like a submarine periscope. They bound effortlessly through gnarled vegetation so thick that you couldn’t take one step without scraping your leg. My European honed senses don’t work well here. It challenges me every time I visit.

During the past year I have spoken to my family from here on balmy summer evenings whilst they told me of hard frosts at home. They told me about the home I missed and of lockdowns that had become progressively darker with the passing of the equinox. I heard about the elderly neighbour from village we used to live, the one who was always nice to us as kids, who had been taken to the hospital. It was hard to tell them about the relatively normal life that people in Western Australia had been living. Covid kept at bay through fiercely controlled borders, strict quarantine and by dint of its geographical isolation - hemmed in on both sides by the Indian Ocean and desert. The relatively rosy present was tarnished by the inevitable journey to endemicity that my family and friends had been living through for what seemed like an age. The world beyond the bench seemed very different to the one I had left. 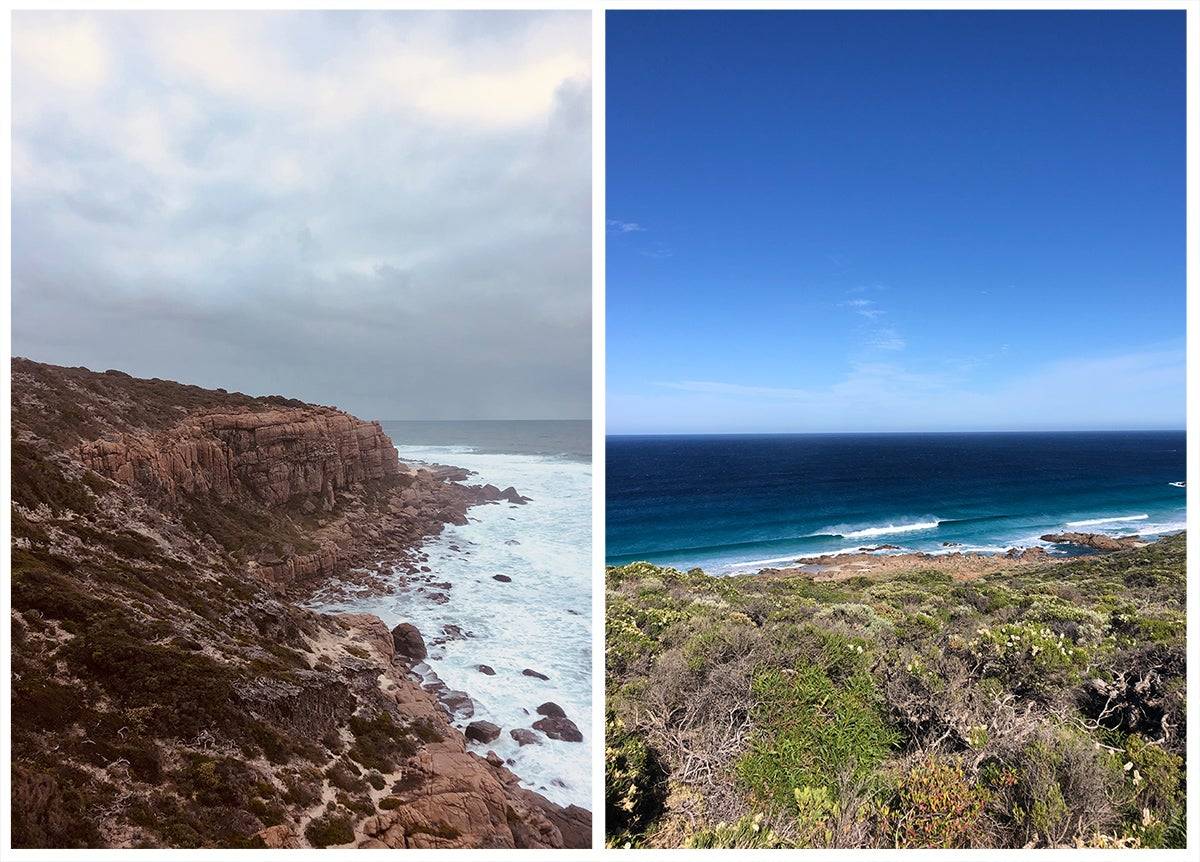 In ten months I’ve only seen other people sat there once. It shook me. The middle aged couple looked at me quizzically as I shuffled past and kept walking until I thought they couldn’t see me. I waited. They were still sat in the bench when I returned. I ended up back at my car feeling completely unresolved.

The seasons will come back full-circle soon. The natural world will never observe our lockdowns. Natures constant flux is one of the comforts of the wild. The breeze of change will always blow. Storms will come and go. The the sun will shine again. Through all that the bench will remain a place for hikers to rest, climbers to share a beer and for me to try and make sense of it all.