The Broadcast / Surfing On Seaweed

Most surfers are well tuned in to the rhythms of the natural world. But what happens when that natural world finds itself out of balance? Well, for surfers like Charlie Cadin, you see if you can't do something about it.

A shaper and surfer from the Island of Jersey, Charlie's approach to the island's problem with an invasive species of seaweed was to see if he could turn that negative into something positive - and so the seaweed surfboard was born... 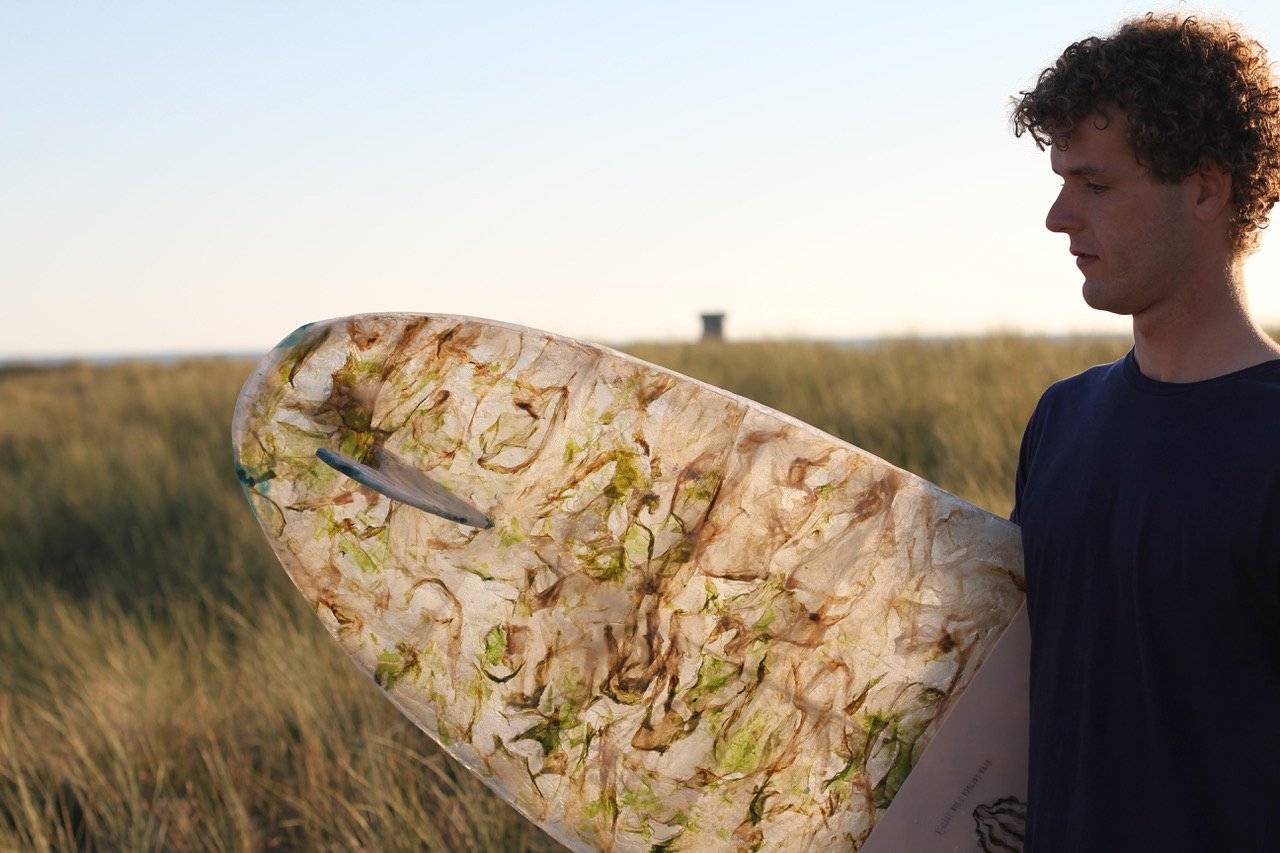 The island of Jersey sits 100 miles south of the UK, with the most southerly surf break in the British isles stretching 5km along the west coast, St Ouen’s beach. With swell arriving on the north and south coast as well, there is almost always a wave breaking somewhere. Covered from tip to toe with tourists and holidaymakers in the summer months, the beaches lie empty in winter, with only a handful of surfers in the water. However, from May to September the island has a significant problem.

Sea Lettuce, an invasive species of seaweed, covers the entire beach from the waters edge to the sea wall. The lettuce cloaks the local sea grass, disrupting the ecosystem in the bay. As the tide retreats it dries, producing Hydrogen-Sulphide gas, which has been linked to injuries across France in the disposal of the seaweed.

Having seen the huge problem in the bay with the sea lettuce and the way it is being tackled at the moment, I wanted to see if it was possible to make something constructive and positive out of it. I have seen that people are currently researching ways to try and convert it into a bio-fuel as an alternative to petrol; however that is a long complex process. Through shaping boards from polystyrene I have seen how much waste is produced; almost the same amount of material as that which goes into the board. So instead of taking a large block of material and carving and shaping down, the aim was to build up from scratch, only using the minimum amount of materials required.

Polyurethane foam- the core material of 97% of modern surfboards is made from petrochemicals; a non-sustainable resource. In the manufacturing of a normal surfboard, approximately 250kg of carbon dioxide is produced, which would take a single tree over 40 years to offset. The Sea Lettuce completely replaces the harmful foam made from essentially burning oil, and has the same amount of fiberglass as a normal board.

About 45 kilos of sea lettuce was collected from the low-tide mark, washed in fresh water and left in a rocker mould to dry. More was added and compressed, producing a paper-mâché-like material. From these sheets the deck, rails, bottom, and skeleton were cut out. The stringer and ribs were slotted together, then bonded to the bottom sheet of the board. The top of the ribs were shaped with a curved top to allow for a convex deck. Rails were cut, shaped and fitted to the board and the deck was strapped to the board. As the sea lettuce dries it turns a translucent-white colour, creating an effect similar to that of a stain-glass window, only using sea lettuce. To prevent the seaweed from dissolving when in contact with water, the board was glassed using the standard 6+4 6 schedule used on all fish/midlengths around today. 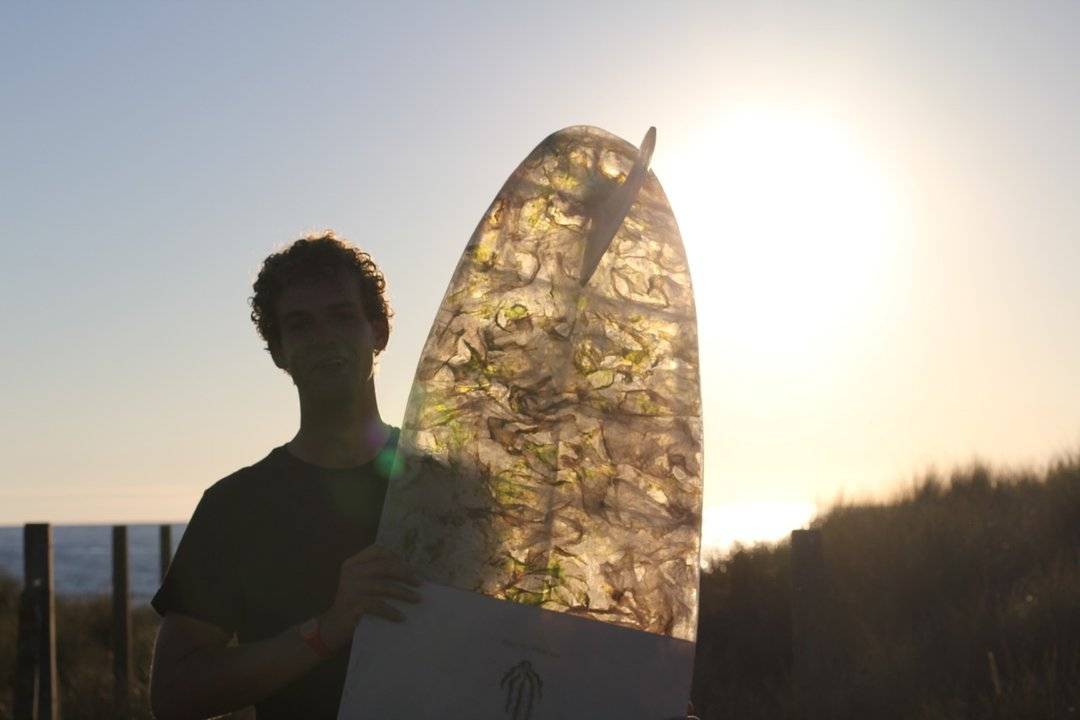 The finished board comes out at 6’4 x 21” x 2.3/4” with a weight of 4.2 kilos. With a subtle concave transitioning to a vee in the tail and soft rails flowing into hard, the board flows smoothly down the line and goes from rail to rail comfortably. We did a huge amount of testing with the board, and it worked a lot better than expected. The board is about half a kilo heavier than the equivalent normal board, but that provides more drive in the water. It has a very high volume and is really buoyant as it is full of air. The board paddles really nicely, however the sea lettuce panels had warped a little bit, and were uneven.

I am currently studying Marine engineering at Plymouth University, and after coming home on my Christmas break I decided to have another go with the seaweed, however this time trying a different idea to make it more economically viable on a larger scale. I collected buckets full of sea lettuce from the beach and dried it flat. Once all the water was gone, it was crushed into a powder, which was mixed in with a few chemicals to create a blank, almost exactly the same density as foam, from 80% seaweed. The foam blank is still completely in an experimental stage, with more work needed in refining it. From the blank I shaped the board from hand, but in larger scales it would definitely be possible to put the seaweed blank on a CNC machine. The board was glassed with a resin tint, and it feels exactly like a normal board in the water, which I think is pretty cool! 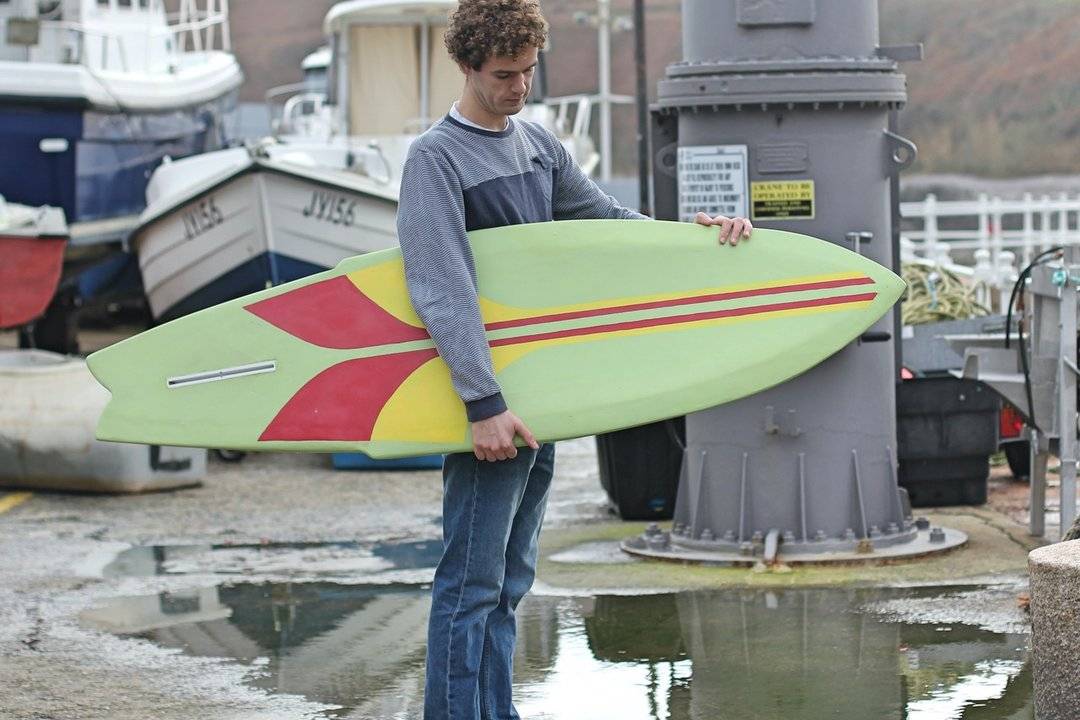 For more information on the project and to keep an eye on how it develops, find out more on Charlie's Instagram account by following @charlie.cadin.