The Broadcast / Esperanza: My Greenpeace Voyage

A formidable voice for good, Greenpeace's largest and swiftest vessel in their fleet has campaigned environmental agenda for the organisation for over 15 years.

When we heard Finisterre employee, Jade Sellick was joining the crew on a voyage to protect ocean sanctuaries, we sought to find out more about life aboard one of the worlds most important and influential ships on the high seas.

Eagerly awaiting the arrival of the Esperanza, we walked along the colourful harbour wall. The marina is covered in a patchwork of paintings left by the sailors who have come and gone before us. The murals are meant to promise a safe passage and have become a tradition for every seafarer passing through. On what was a fairly overcast day, the rainbow that is the Esperanza appeared from around the headland. She stands out in comparison to the sailing yachts that fill the marina but is dwarfed by mount Pico in the background. Filled with a cocktail of nerves and excitement for the adventure ahead, I realise this is my home for the coming weeks.

I was about to embark on a month long adventure across the Atlantic Ocean as part of the Pole to Pole voyage with Greenpeace, campaigning for a huge network of ocean sanctuaries. The Protect the Oceans expedition is teaming up scientists and campaigners to research the pressures that the high seas are facing such as climate change, overfishing, plastic pollution, deep sea mining and oil drilling.

Negotiations towards a Global Ocean Treaty at the UN are already under way and we need a strong ocean treaty that creates and protects a network of ocean sanctuaries. The science is clear that in order to defend precious wildlife, help to tackle climate change and provide food security for billions of people, we need to protect at least a third of the world’s oceans by 2030. Our fate and the fate of the oceans are intimately interwoven. The high seas are so significant and they belong to every one of us. I was joining for the 2nd leg of the tour starting in the Azores, Portugal. 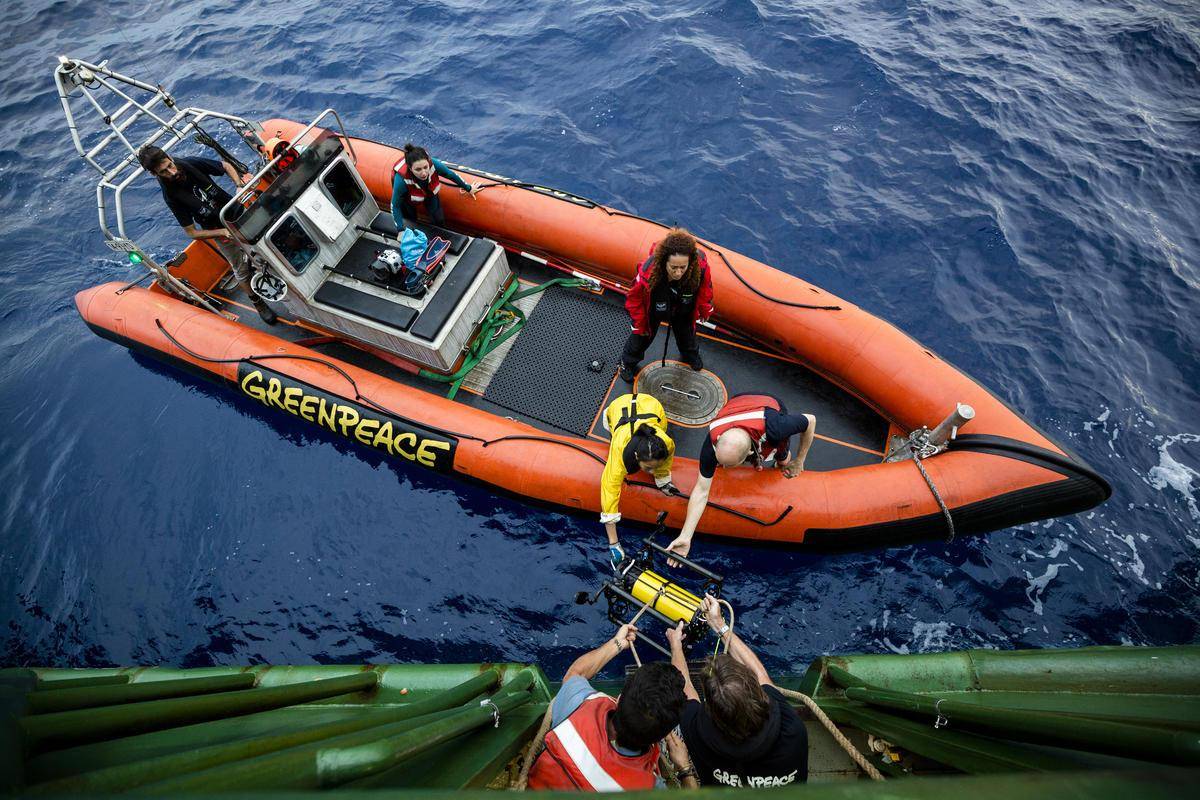 Up before the rising sun, we departed Horta harbour with a team of local scientists to explore nearby unchartered seamounts. The idea that these mountains, rising thousands of meters from the seafloor, have gone unexplored by science is astounding, but then again we know so little about the deep depths. We were going to be the first people to set our eyes on them!

I don’t remember much of the transit, as the following days merged together; I was preoccupied trying to find my sea legs. Having left the protection and calm of the harbour, the swell pounded the vessel in turbulent surges. I quickly discovered my favourite places to seek refuge on the boat and keep my eyes locked on the horizon. The bench on the starboard side, the bow and the bridge become familiar sanctuaries with the best, unobstructed view of the endless ocean and ever-changing sky. Barbara soon joined by my side, the other photographer and only other newbie on board. Trying to find moments of laughter between being sick over the side, we soon forged a strong bond. By the end of day three we had become accustomed to the rhythm and movement of the ocean, as the swell started to settle.

We had a testing week with adverse weather conditions and technical concerns with the remotely operated vehicle (ROV), with just a handful of successful dives under our belt. One thing you quickly learn being at sea: you have to work with what you are given and make the most of what you can. On one of the dives, the ROV was searching the apparently barren and eerie seafloor when looming in the background, a huge sprawling coral over a metre in diameter, and thought to be well over a hundred years old. The scientists revelled in this discovery, as more hidden treasures of the deep sea are uncovered. 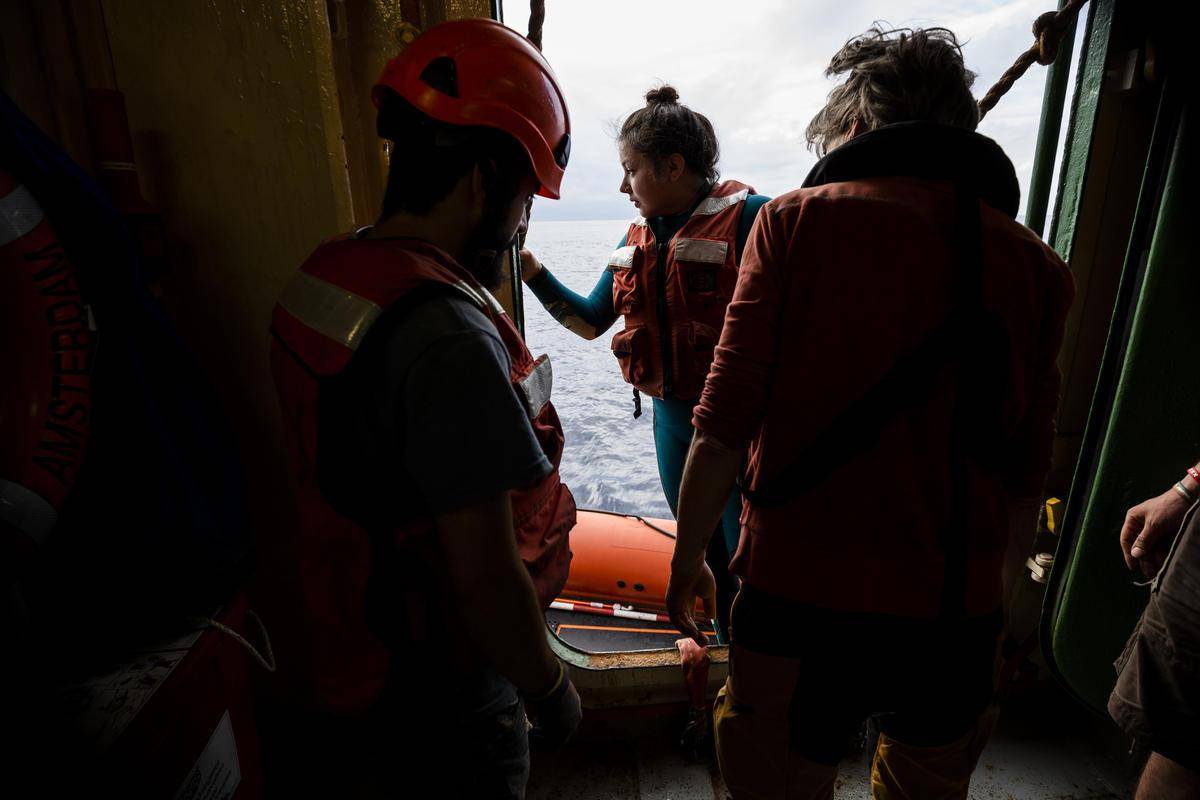 On our way back to port the scientists mentioned a seamount famed for its spectacular marine life, although not on our original route and with a tight schedule the captain decided it was possible to make the slight detour. We arrived just as the light was leaving us, melting into the horizon. I got suited up and jumped in the water to capture the ROV descending into the infinite depths. As much as I love the sea, and being in it is usually where I am happiest, admittedly this terrified me. I have a deep fear of deep water, not being able to see the bottom and the unknown. I focussed my attention on the ROV and how the light reflected and danced off the surface until it sunk out of sight. We waited on the rhib while the ROV dives as we heard cheering over the radio, “there’s so much life!” As we returned to the Esperanza, we were greeted with a chorus of cheers. Initially I thought it was because of the successful dive but turned around to see manta rays pirouetting through the water just a few meters away, flying with such grace and elegance.

Back on board, we got to watch the ROV footage. Bursting with colour and bustling with life, we spot a vast variety of marine flora and fauna. In our short time in the Azores we saw so much life, 11 sperms whales, blue sharks, different species of dolphins!

Back in Horta harbour, now a familiar setting, we had the pleasure of meeting and spending time with another scientist, Professor Gretchen Früh-Green. She discovered the so-called Lost City on the mid-Atlantic ridge. The Lost City is a complex seafloor ecosystem of hydrothermal vents, which is thought to harbour clues to the origins of life on Earth. Licenses to explore for deep sea mining in the area have recently been permitted by the International Seabed Authority, which could cause irreversible biodiversity loss. 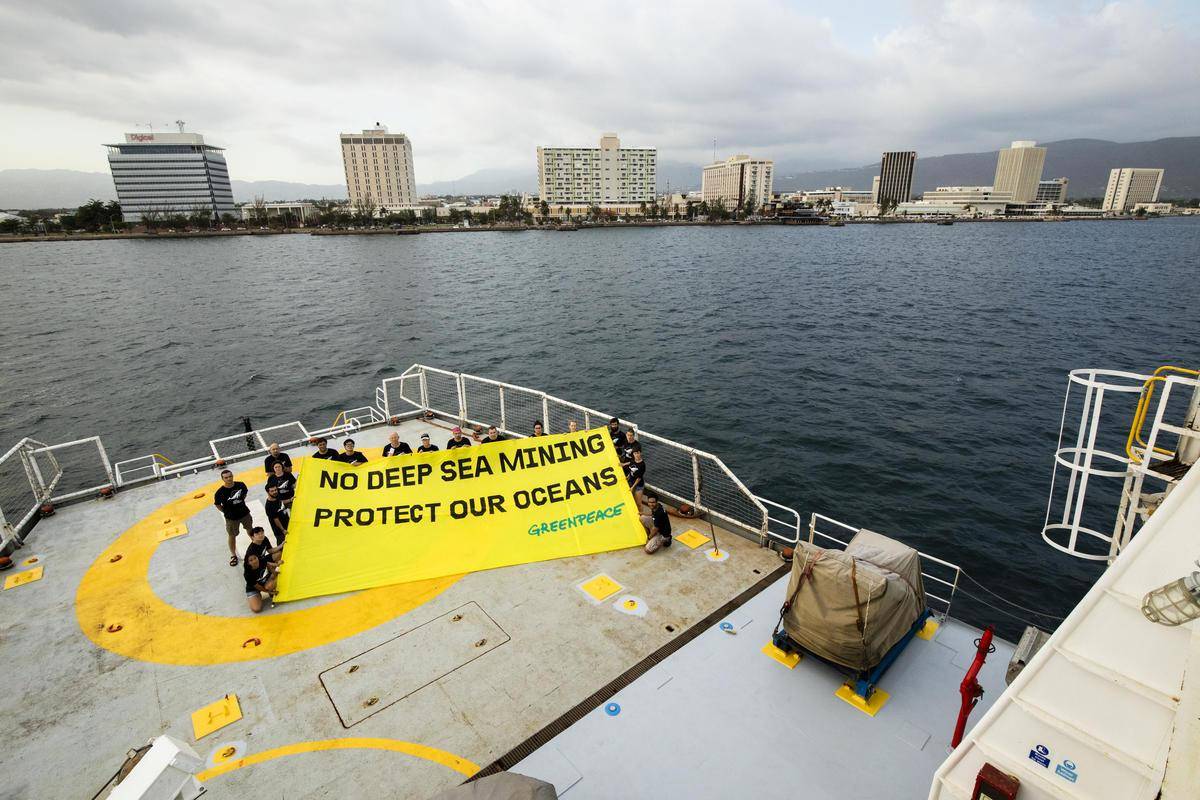 This time when we left the port, I knew we wouldn’t be coming back. We were crossing the Atlantic to find the Lost City and campaign to protect it. Land was long behind us and we hadn’t seen any other vessels in a couple of days. I sat at the bow, captivated by the endless blue vista and its seeming emptiness. We are just touching the surface of what lies beneath. You become so closely connected and appreciative of what our planet offers us in an environment like this. The beauty was extraordinary, sunsets that set the sky on fire, constellations mirrored on the dancing water, bioluminescence illuminating the waves. It is not often that you get the opportunity to truly lose contact with the outside world. With no one else around but ourselves, we fall into the rhythm of a routine driven by our surroundings, dictated by sunlight hours, wind speed and swell.

As we pass over the co-ordinates of the Lost City that lies hidden a kilometer below, the crew launches two rhibs and deploy a banner ‘NO DEEP SEA MINING, PROTECT OUR OCEANS’. To mark the occasion as the sun descends; we raise a handmade flag illustrating the symbolic white towering chimneys of the Lost City.

A few days later we woke up to an industrial backdrop and hustling soundscape. The city sprawled out along the waterfront, nestled between the murky water and the scarred mountains. We had sailed to Kingston, Jamaica to bring the concerns of people around the world about deep sea mining to governments at the International Seabed Authority (ISA) assembly meeting. Supported by local environmentalist and non- governmental organisation, we headed to the Jamaica Conference Center, the ISA headquarters. Met by a large police presence, activists respectfully and peacefully deployed the banner at the corner of the street and proceeded to hand out leaflets to arriving delegates. Meanwhile Gretchen had gathered vital support by 28 leading marine scientists in an open letter to the ISA, calling on the organisation to work with scientists when deciding on the fate of our international seabed.

The protest came to an end and so had my time on the boat. Meeting people from all around the world, passionate and dedicated to living a life orientated around the sea while surrounded by the Atlantic is pretty extraordinary. There is a humbling power to people coming together, connecting and contributing for a common cause. Tangled up in a mix of emotions, overwhelmed by sense of affection and sadness it was my time to part ways with the Esperanza and it’s crew. Although for the Esperanza, the journey isn’t over yet.

For more information on the campaign, check out #ProtectTheOceans or the petition at greenpeace.org/protecttheoceans.