“The thousand times that he had proved it meant nothing. Now he was proving it again. Each time was a new time and he never thought about the past when he was doing it.”-

E. Hemingway, The Old Man And The Sea. 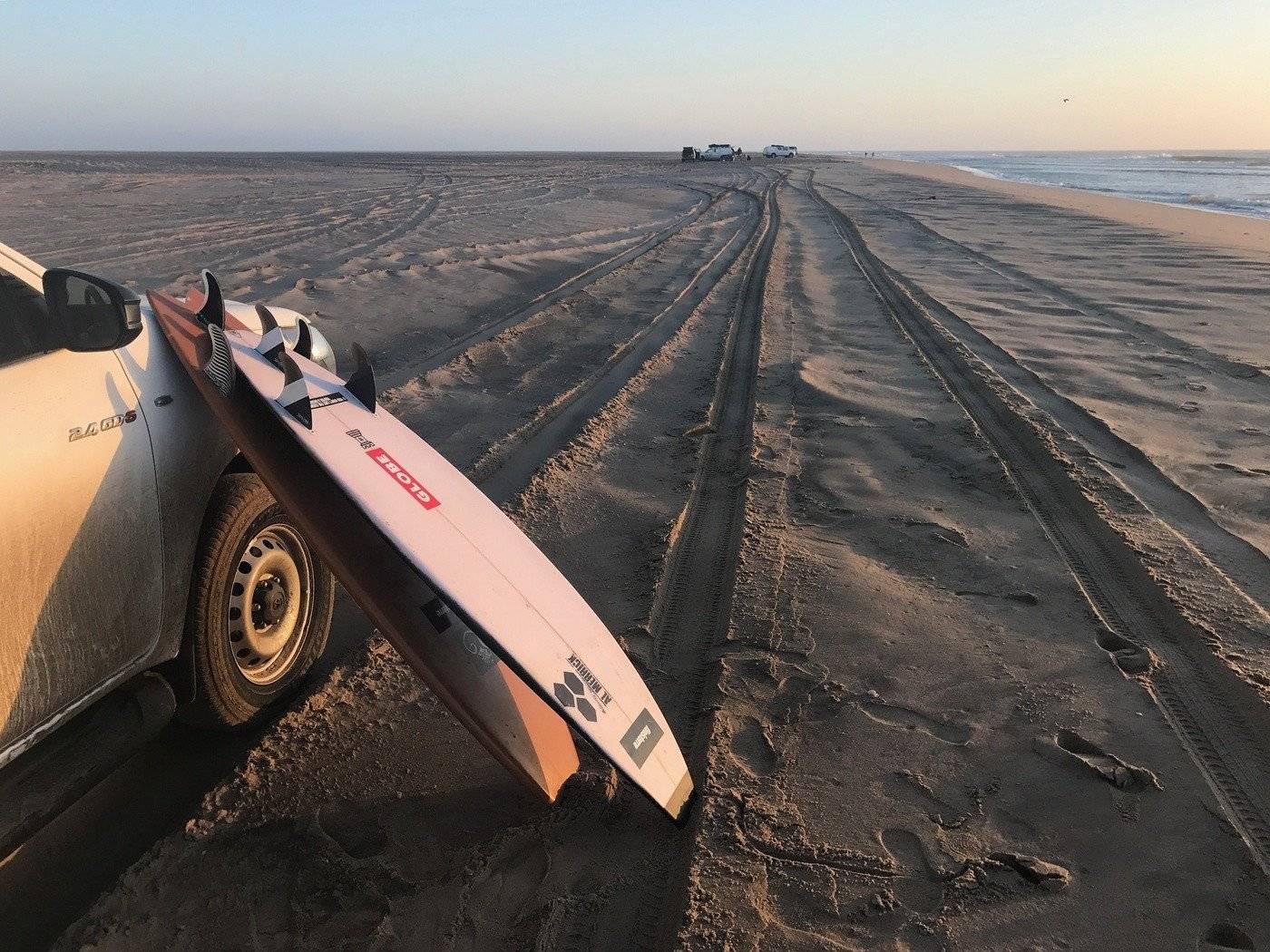 It’s difficult to articulate what would drive someone to book a ticket halfway across the world to go surfing on a whim. Compulsion? Passion? Obsession? Zeal? Lunacy? Maybe a combination of them all? But the above Hemingway quote resonated heavily with me as I sat on the bus hurtling towards the airport and I felt captured what I was trying to find words for in my own head.

Proving yourself, not in a traditional external peer viewed sense but a desire internally. The challenge. Each time new and with no gratification from past successes, only the here and now and overcoming the challenge presented in the moment. And it’s the challenge presented by something greater with innumerable variables and power almost beyond comprehension. I’ve spent the majority of 28 years in and around the ocean and another 2800 wouldn’t make me an expert. And that brings me back to the act. This volatile environment and unpredictability ensures every act is new. Each with a new set of challenges in an attempt to comprehend and decipher in fractions of seconds. Instinct and intuition over process and logic. I suppose that is a form of mindfulness? A strive to be better and gain a better understanding, in every situation presented.

To a normal person it doesn’t justify spending extortionate amounts of money with minimal planning to fly across multiple continents only to stare at the same ocean from a different coastline. That drive, the challenge, the present, and proving and pitting yourself against an impossibly complex and intricate force… But it was why I was headed to The Donkey. Skeleton Bay. Namibia. 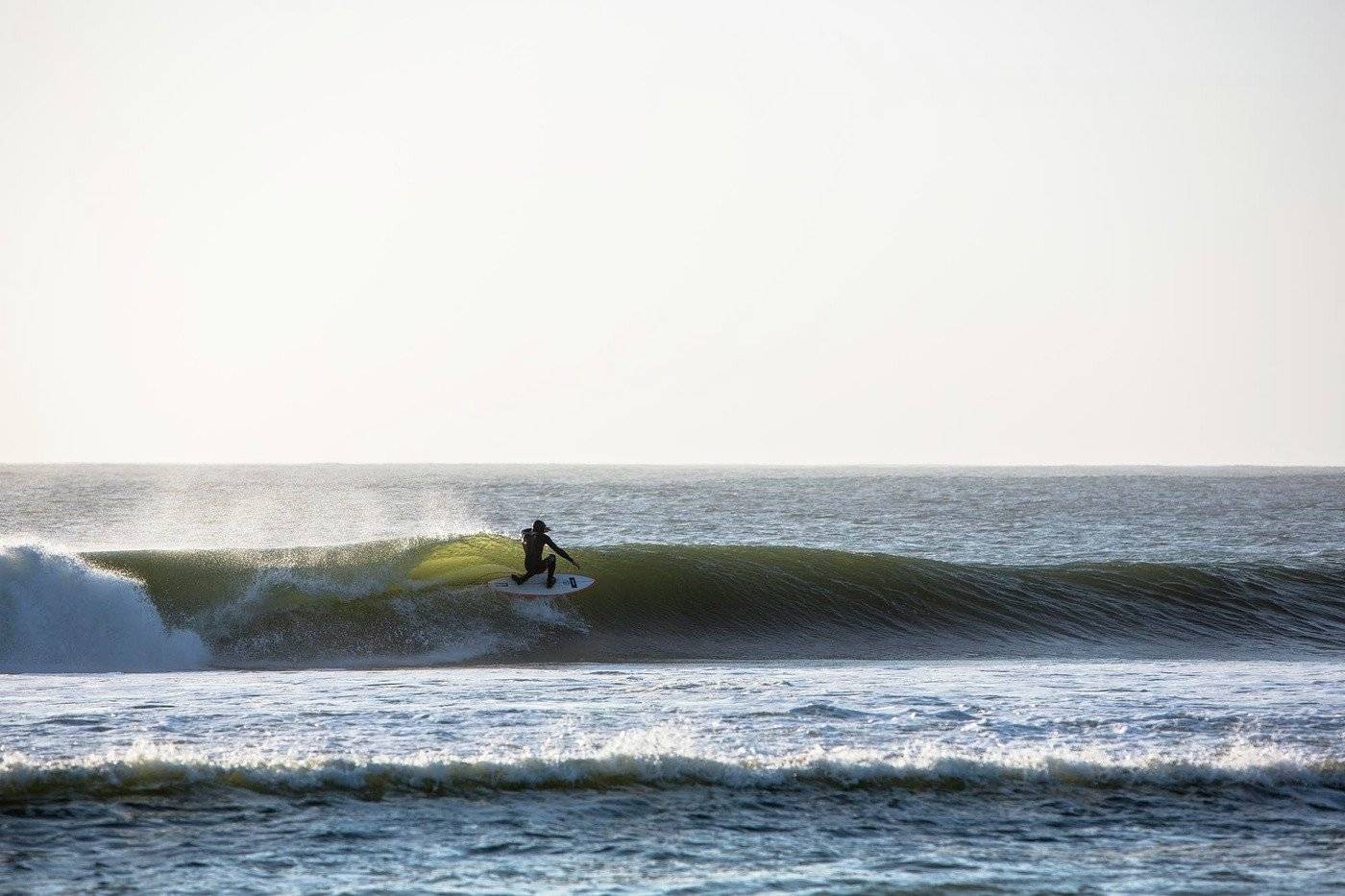 Describing a wave in text successfully is often as fruitless as describing the above but anyway… I first watched footage of endless perfect lefts reeling for the first time in a Lost Surfboards film probably 6 or 7 years ago. It was captivating for any surfer and especially for a goofy living in the land of rights. But at the time I dismissed it as a far flung dream and left it to the disc in the DVD player. A few years later my fascination was once again sparked as the web clip took off. Endless POV clips from inside bright green tubes staring out a vast bare landscape have become the signature of Skeleton bay. What they fail to translate are a few very important things.

Secondly, the way the wave breaks. Contrary to the majority of regular waves breaking towards the shoreline, the donkey moves parallel to the sand. The angle of the point sits just right that the swell marching up the coast touches its outer reaches and moves towards the elbow where the coast faces straighter into the swell some 2-3km north. This also allows a wave to remain and often increase in size from it’s original landfall. The bank is incredibly shallow and low tide often makes waves turn inside out and squarer than surf-able.

Lastly, and probably most notably, is the incredible speed at which the wave moves. A unit of speed is probably a good starting point and we hit 40 kilometres per hour following one breaking wave along the point. Accelerating closeout comes to mind. From the moment you decide to paddle for a wave, everything happens seemingly twice as fast as normal. You have to be in early and moving before the tube otherwise its oblivion and once on your feet, it’s more physically demanding than any other wave I’ve surfed. I used to run 800m races in school athletics and I remember a running coach once telling me it was one of the hardest- “a prolonged sprint”. Donkey reminded me of that; except its 2km long.

It’s been written before, but the combination of these factors result in a very different experience to what the idyllic online clips of endless makable perfection might suggest. This is not an easy wave. Upon realising that, my perceptions were altered but I left equally impressed and even more in awe of such an extraordinary wave, it made you appreciate the good ones that much more. 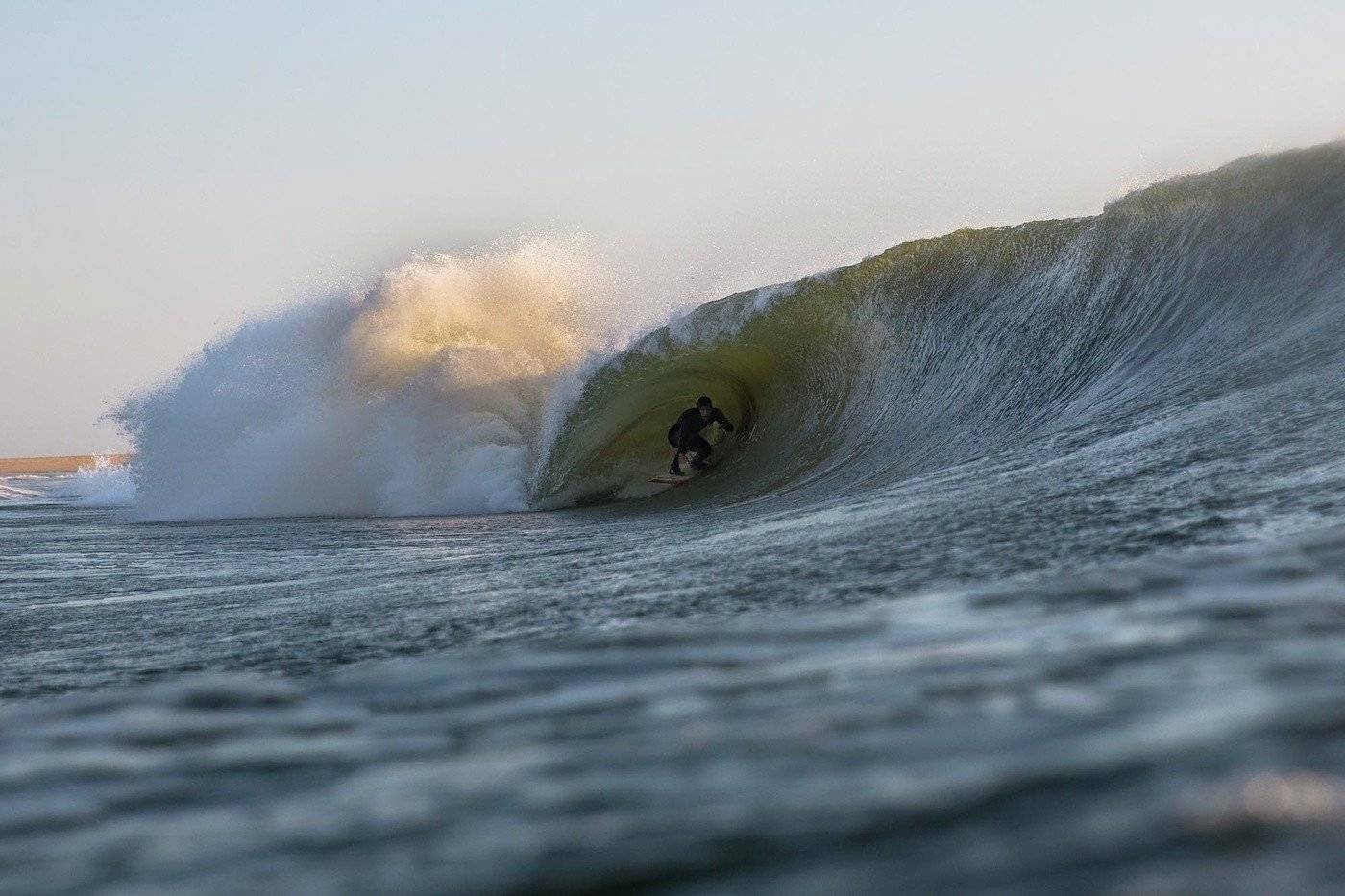 After the decision was made and the flights booked, I realised that this would be my first solo mission in a very long time. A few calls later and I was reassured by friend Matt Bromley’s encouragement who would be making the same pilgrimage. Being greeted in the airport by a familiar smiling face in a new country must be one of the greatest comforts for a traveller exiting those sliding doors.

We joined other pilgrims making the same journey, small posse’s of 2’s, 3’s and 4’s buzzing together through airports, cab rides, restaurants and onto the beach. I rolled in a group of 5 for the first few days; Matt, Jerome, Fred, Etienne and myself - new and old friends. We moved as a unit, rising, packing, unpacking, eating and sleeping together through days and nights.

On the backside of a diminishing swell I bid farewell to the other 4 as they drove away from the beach and my pile of stuff in the sand. Once again Hans Solo. On my Pat Malone. The benefit of this is that you’re easily adopted by other surfers; my new surrogate family being a Basque contingent. Their exuberance and flamboyance was infectious and while I only momentarily understood conversation, body language spoke the rest.

Another departure and myself and Jon were the remnants coupled. A duo soon teamed with a pair of Italians - Roby and Eugenio. A Basque, 2 Italians and an Australian walk into a bar… Loubser’s backpackers was the pot and surfing the hero ingredient bringing everyone together. Other’s came and went but the camaraderie and open friendliness never diminished. Travelling with friends is great but travelling alone really forces you out of yourself and it was great to be reminded of that. 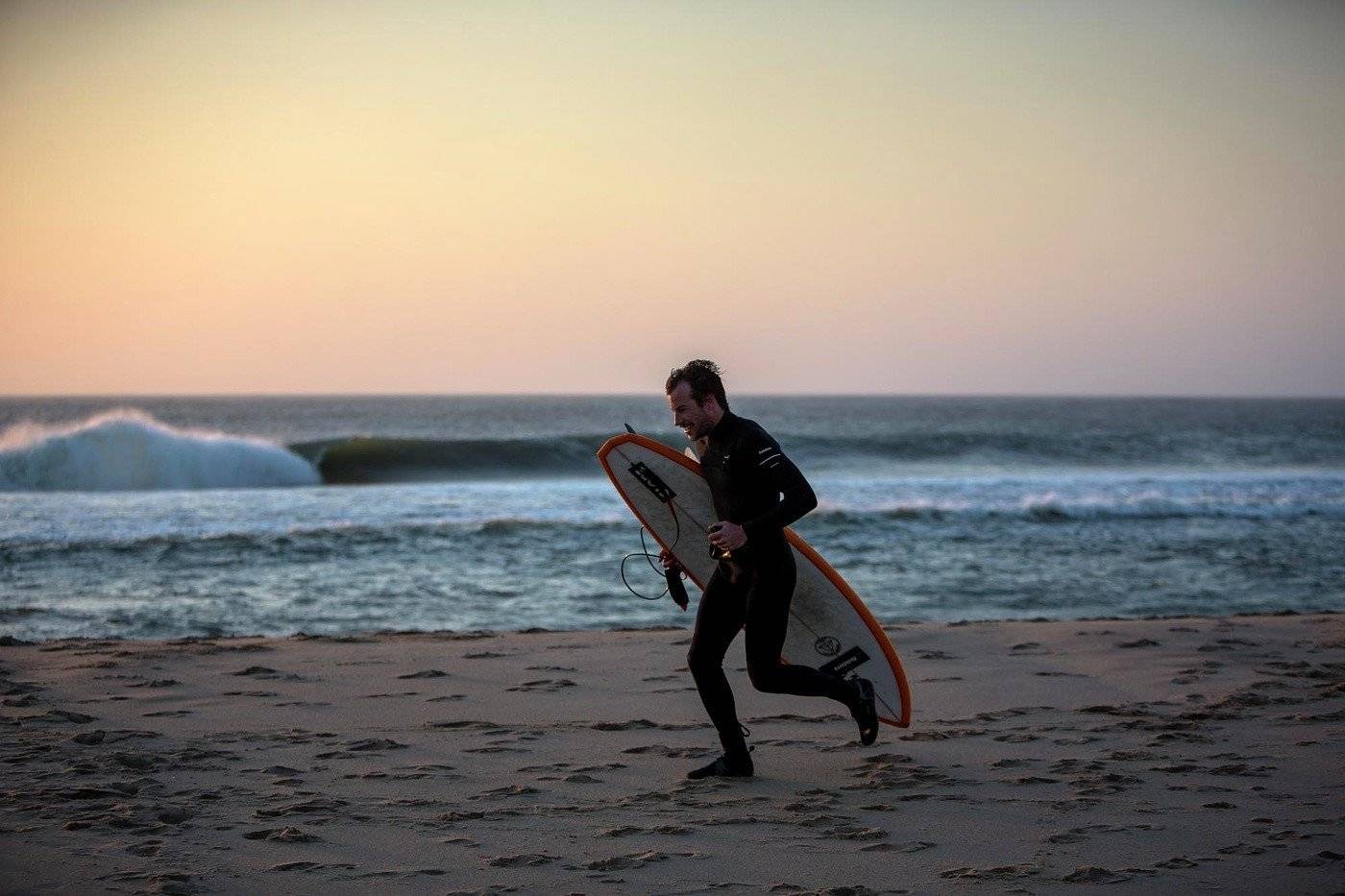 With very little planning prior to leaving, it was with some blindness and naivety that I entered the country. Speaking with friend’s prior to going, I was confronted with a few looks of wonder and inquiry from those unaware of the purpose. I guess without further enquiry, it’s very easy to lump the whole African continent into a war torn, poverty stricken danger zone. How wrong those perceptions can be.

While arguably I only scratched the surface, my first impressions were of how similar Namibia resembled the passing glance I got of South Africa. The modern comforts of a well developed country were easily accessible and the cost of living hardly the small change I had expected. However, most noteworthy was the landscape. Never-ending expanses of desert stretched as far as the eye could see - endless flat gold.

A heavy fog shrouded the landscape most dawns and the temperature was startlingly chilly. By mid-morning the earth was heated enough to shake the mist free and was swiftly replaced with dazzling hours of sunshine until mid-afternoon when the sun caught dust thrown by the trade winds casting everything under an orange sheen. Mad Max was filmed just down the road and in an era of climate change it was like peering into a crystal ball.

They should send Trump out there for a week.

The drive to the wave was apocalyptic. 20 minutes through salt pans and a road reclaimed from the inlet threaded towards the coast. In the dawn fog the beach drive would have been impossible without a trained eye and the remnants of tire marks from previous days in the soft sand. Jackals slinked away in the distance and huge flocks of flamingoes stood silhouetted eerily as the sun slowly glowed through the air.

When the morning cleared at the famous wave, a lone black and white lighthouse stood sentinel at the end of the bay shimmering amongst a 50,000 strong fur seal colony. Flat days arrived and we headed inland. Past Dune 7 and the majesty of the moving sands like something from Indiana Jones. Towards Windhoek, the landscape softened, a mountainous terrain shrouded with shrubs and greenery. A safari later and Giraffe, Leopard, Antelope, Crocodile and Hyena amongst others were added to the list of sights. A truly beautiful country and far more than just home to one of the worlds most incredible waves.