Most who chase big waves don’t do it for fame or glory. They do it for passion. Fabian Campagnolo is one such individual – grafting during the summer months to be able to chase monstrous waves through the winter. A different kind of graft. And one that has prepared him for all eventualities…

I was in Morocco with my sister. She’s a tough cookie, but the waves were pumping and she was out of her depth. We had missed our exit point and were getting washed down the coast towards the dagger-like rocks of the cliffs. She was tired and kept sinking under the water, each time resisting less and less. I had to keep pulling her up. Our leashes were tangled. We were getting mowed down. She was just lying there. I was holding her hand. She was totally surrendered. Finally, she looked at me and said, “I can’t anymore, I’m blacking out.” In that moment I had the gnarliest feeling inside of my body. Her life was literally in my hands. We were out of control, and I was using all my strength and experience, just to try and keep her alive…

I met my sister in Morocco after finishing my 4th season in Nazaré. I worked my guts out in a German winery to make enough money to survive on the breadline for 5 months in Portugal. I’m 23 years old now and more confident than I was at 19. I flew below the radar those first three seasons. My goal was to watch and learn from the older guys. 2022 was my breakthrough year. There were so many good, big days in a row. I couldn’t afford to pay for accommodation, so I was staying in a warehouse, sleeping amongst the jet skis on a hammered old spring mattress. It felt like I was cold all the time. I never slept properly, especially when the waves were big. The warehouse was on sea level. Sometimes at night, the helmets would fall off the wall, rattled loose by the thudding vibrations of enormous waves exploding nearby. The walls would literally shake around me. 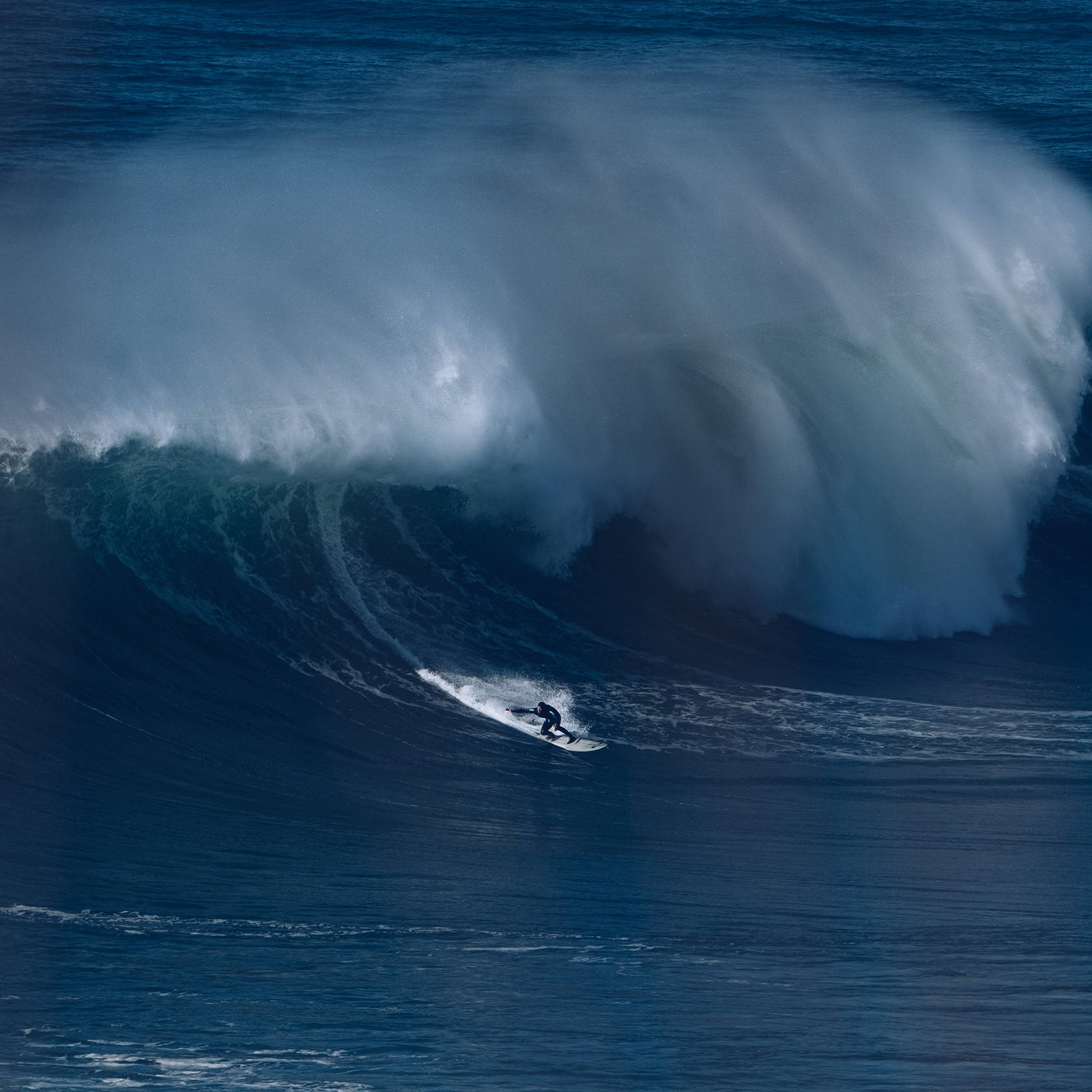 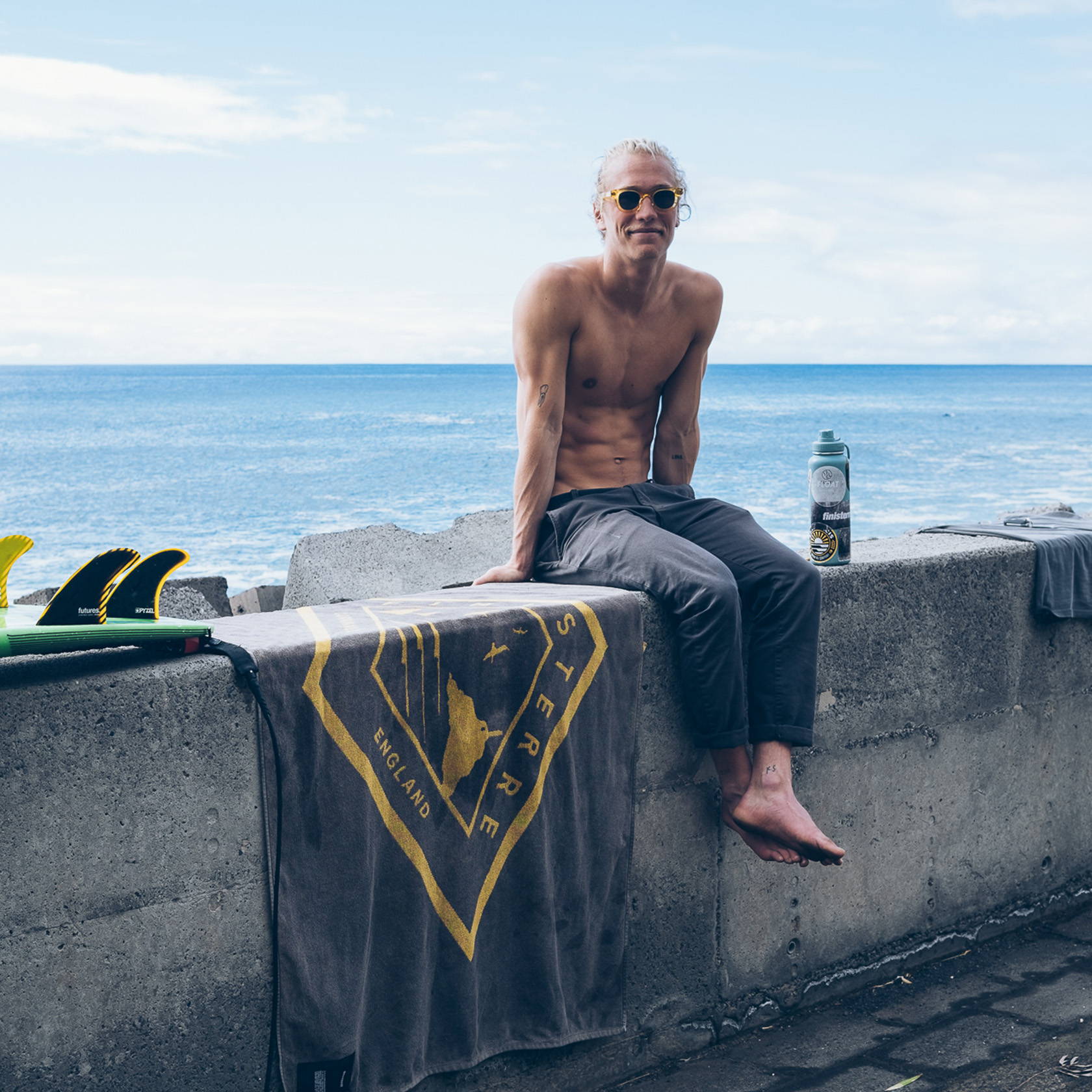 I’ve had some heavy wipeouts over the years and still managed to keep coming back, but I suffer from concussions, so I’m often a bit dazed and confused. This year it was swell after swell and I didn’t feel like I was getting enough time to recover. I would ask myself if I really cared enough about riding big waves to be prepared to die doing it. I’d surf for 5-6 hours at a time and end up delirious from lack of food, physical exhaustion and being bashed around. I found myself constantly trying to identify where that fine line between physical exhaustion, concussion and just plain fear was.

Paddling yourself onto waves is so much scarier than getting towed into them with a jetski. Paddle boards are twice the size of tow boards, so wind becomes a factor. It can feel like you’re trying to stand on a kite in the wind. The waves over there get so big and windy and choppy. One wipe out was worse than anything I’d experienced before or since. I airdropped, my feet landed wrong, I caught my rail and had to go straight. I remember looking up and seeing the lip far above me. I was going so fast that I misjudged my dive and didn’t penetrate. My head hit the water and I cartwheeled down the face. I got thrashed around for so long. I normally feel dizzy only when I come up, but this time I was dizzy under water. My head was spinning in a thousand directions and the wave just kept pushing me deeper. When I eventually came up, I inhaled foam and my throat closed up with an involuntary spasm reflex. I couldn’t breathe anymore. Then another wave rolled over and I started seeing stars. I was totally disorientated. I went somewhere else in my head where the reality wasn’t so gnarly and eventually blacked out.

When I came round again I was frantic. When a rescue jetski eventually picked me up, the guy could see I wasn’t ok. He climbed off the ski and onto the rescue sled with me. He held my hand. I had this crazy feeling like I was going to vomit, but instead I began to weep uncontrollably. I’ve never in my adult life, cried like that. 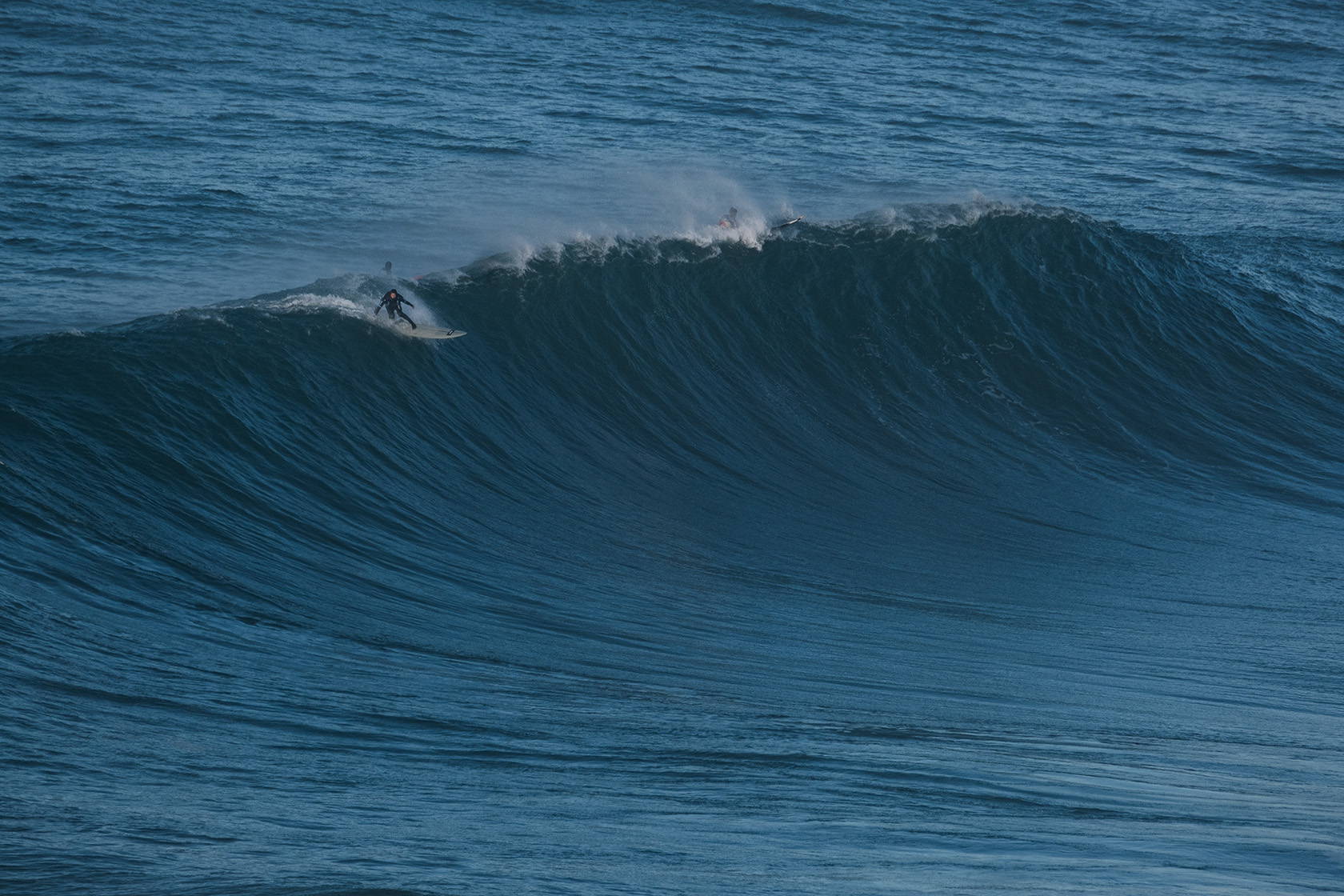 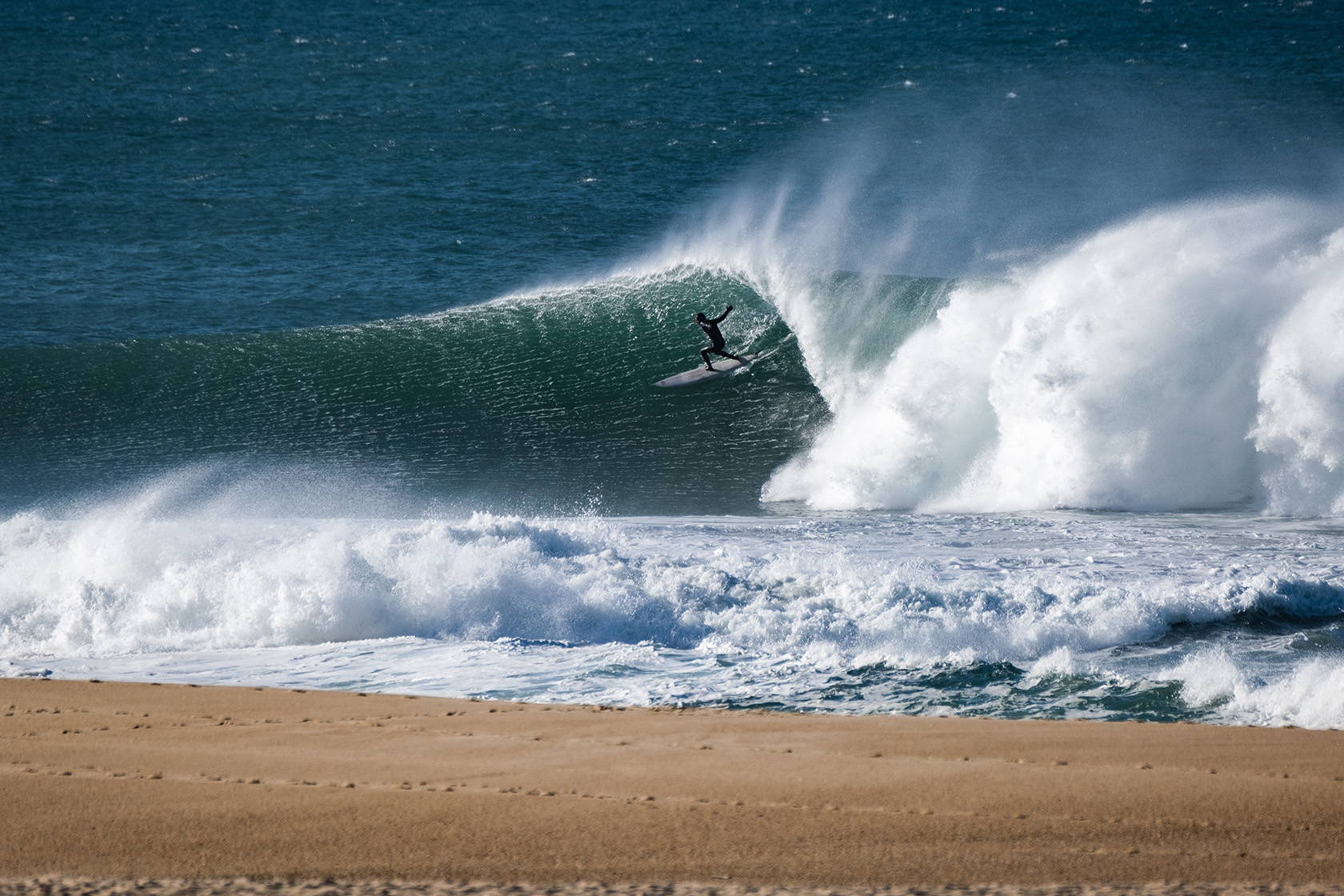 At Nazaré the surfers are very capable, but in Morocco with my sister, that was different. She would have drowned if I hadn’t been there. It was a terrifying thing to go through. I had to drag her 6 kilometers down the coast before we found a safe place to come ashore. She was shaken up, but otherwise fine. However, it took me a few weeks to process. It really messed me up. During the 2022 season at Nazaré there were many situations where I’d thought of what I’d do with a lifeless or unconscious body. When things went wrong with my sister, I felt like I was already prepared and so I started doing those things that I’d been thinking of. I realized that the smallest decisions can have huge consequences. I often over-think things, but that was one of those situations where over-thinking it ultimately prepared me for the worst-case scenario.

People ask why I keep going back out there. I’ve thought about it a lot. We all die in the end, and there are far worse ways to die than drowning in big waves. So, I guess I’ve had to make my peace with that. 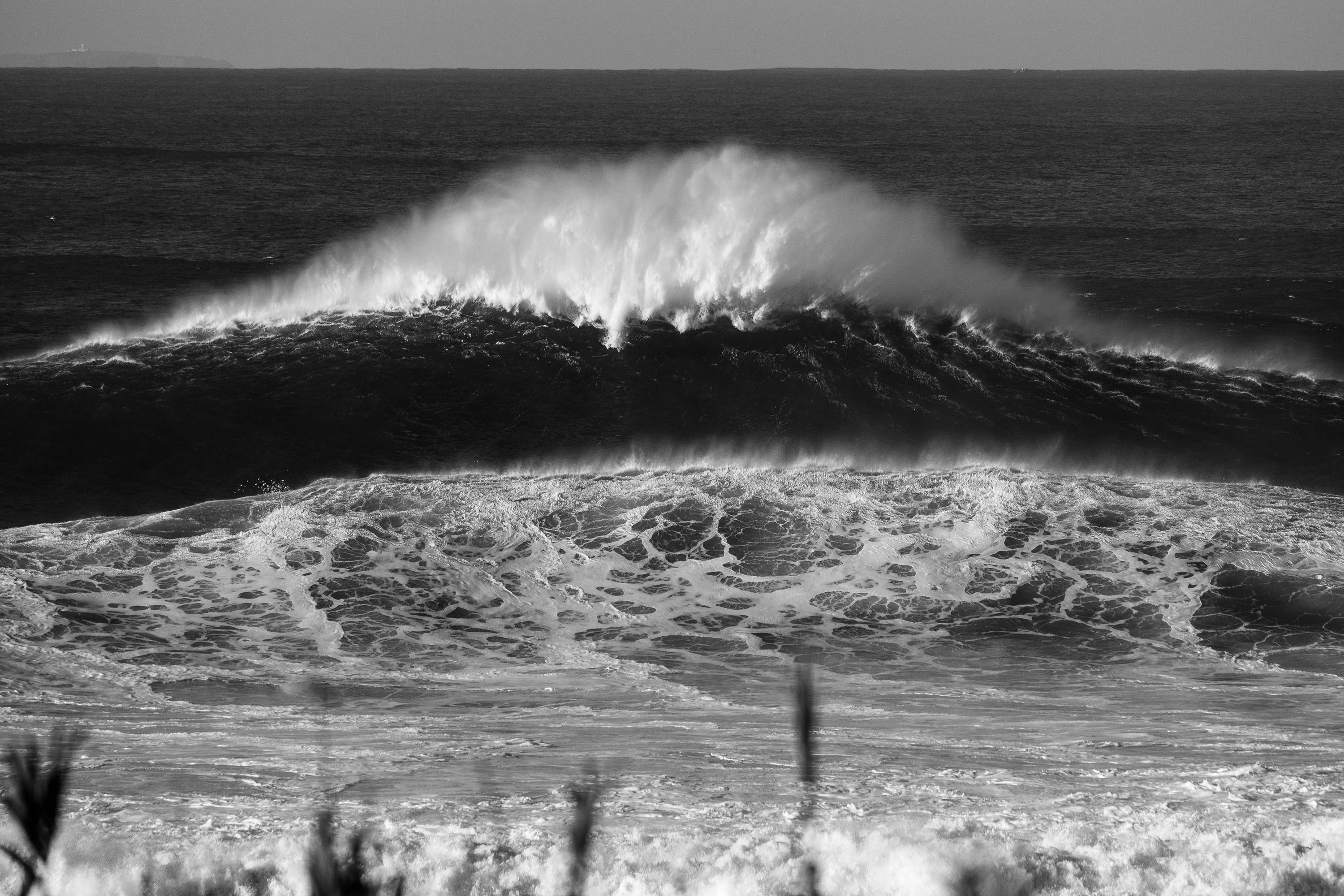