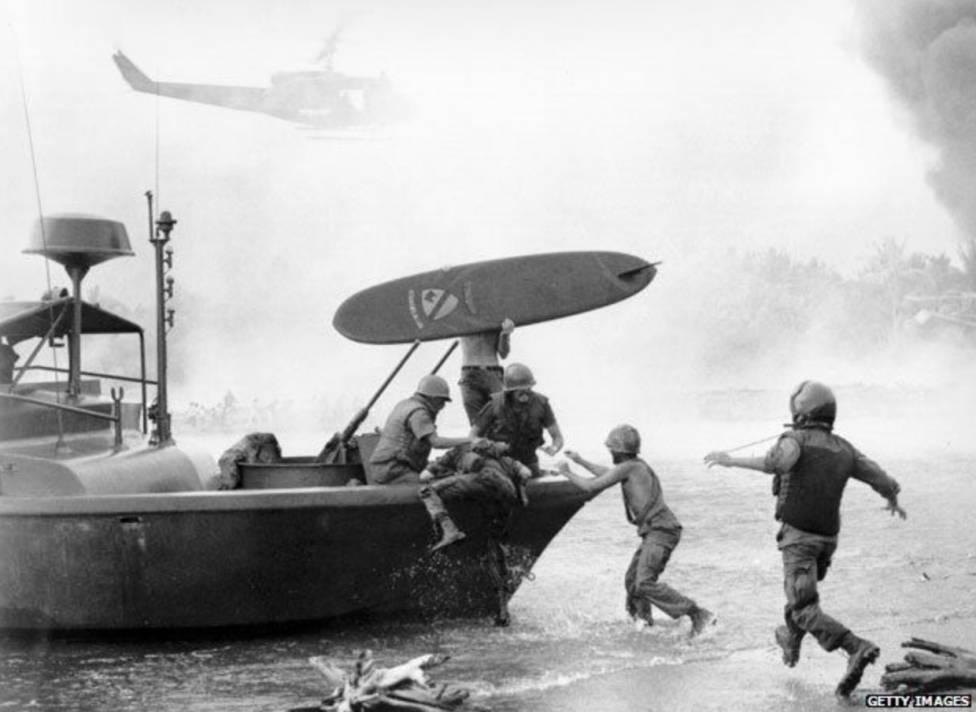 Milius’s Hollywood recognition came in the script for Francis Ford Coppola’s Apocalypse Now (1979). It was based on Joseph Conrad’s novella Heart of Darkness (1902), that tells the story of a journey by a sailor, Marlow, upriver into the Congo interior, to track down a megalomaniac ivory trader, Kurtz, who had ‘gone native’ and adopted the role of a savage god. The story works on many levels – an observation on the ills of colonialism (the Congolese were disgracefully exploited by King Leopold of Belgium, for rubber and ivory); on greed and self-importance; and on madness induced by an inner and outer journey to a heart of evil. Transposed to Vietnam, Willard (Martin Sheen) tortuously follows the tracks of the mad Green Beret, Kurtz (Marlon Brando), who had drawn around himself a rogue army.

Written into Coppola’s film by Milius is a scene where surfer Colonel Kilgore’s (Robert Duval) chopper unit takes on a raw recruit who happens to be a famous surfer back home in California (Lance Johnson). ‘Lance’ is based on Malibu surfer Lance Carson, also the model for Big Wednesday’s Matt Johnson. Kilgore intends to go surfing while a north Vietnamese village is bombed. At ‘Charlie’s Point’ Kilgore discusses the finer points of surfboard design with Lance, and asks him if he will go out and surf. Kilgore sniffs the air: “I love the smell of napalm in the morning,” and, when Lance shows natural trepidation at going surfing in the middle of a war zone, Kilgore fixes his eye: “You either surf, or you fight.” Lance thinks he will get killed out there, but Kilgore quells his fears, because “Charlie don’t surf.” Charlie (the Vietcong) could not touch the white Californian sports hero. Conrad’s story exposes colonial racism as ‘the heart of darkness.’ In a final twist of fate, the freshly unloaded bombshells cause a vortex to blow the wind onshore, destroying the clean’ surf.